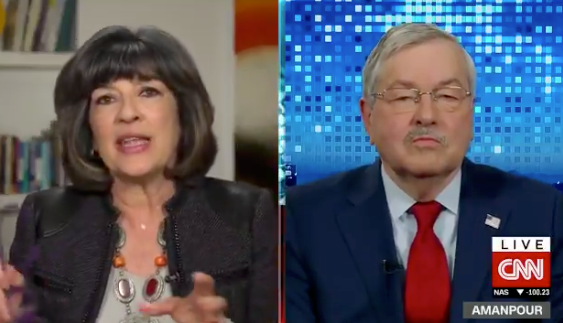 Terry Branstad calls out China's lies, but not Trump's

In a nationally televised interview this week, Former Governor Terry Branstad joined the ranks of prominent Iowa Republicans who still refuse to debunk Donald Trump's Big Lie about fraud in the 2020 election.

Branstad was a guest on the February 17 edition of Amanpour & Co, which airs on PBS and CNN. You can find the transcript here or here. Much of the segment focused on U.S. relations with China, where Branstad served as U.S. ambassador for three and a half years before quitting last September to campaign full-time for Republican candidates in Iowa.

Journalist Christiane Amanpour posted her back and forth with Branstad about the 2020 election on Twitter. Her effort to get Branstad to say whether he thinks Joe Biden won the presidency fairly is a must-watch.

Terry Branstad was former President Trump’s Ambassador to China and campaigned for his re-election in 2020. Is he not concerned by Trump’s disregard for American democracy? Branstad won’t say – nor will he concede that Biden won the election fairly. pic.twitter.com/e9KmhCYB9V

Amanpour broached the subject this way.

OK, so, Governor, let me — let me ask you to put your governor and your senior Republican Party hat back on and ask you, what do you think China makes of President Trump basically disregarding the democratic process in the United States itself, leading to that terrible insurrection on January 6, and even tonight has gone on the air to once again deny that he lost the election, to once again baselessly say that it was stolen?

First of all, your reaction to that, because he said it just now. And, secondly, what do [Chinese President] Xi Jinping and the others think? Do they think, oh, well, the United States is not somebody we have to take seriously when they talk to us about democratic principles?

They even continue to say that the Wuhan virus, which has become a worldwide pandemic, came from American soldiers that came to Wuhan, or it came from Europe. So, they have lost a lot of credibility with their propaganda and their wolf warrior approach around the world.

Responsible people stopped calling the novel coronavirus known as COVID-19 the "Wuhan virus" some time ago. That term (or "Chinese virus," as Trump preferred) fueled racist attacks against people of Asian descent all over the U.S. One hopes Iowa's former governor wasn't consciously feeding that dynamic when he accurately noted that China hasn't been truthful about the virus over the course of this pandemic.

Let the record reflect that Branstad is against government propaganda--when it comes from China.

The former governor then pivoted to non-sequiturs about GOP election victories.

I think it’s important that Republicans recognize that we need to work on and focus on policies that are good for America. And I’m proud to say that I never lost an election. I was elected governor six times, served longer than anybody else.

And I have helped build the party in this state and working to support Republicans around the country. We now have 60 percent of the legislatures. We have 27 of the governors. We have, I think, gained 12 seats in the Congress in this last election. And I think we need to continue to focus on policy and reinsert the Ronald Reagan 11th commandment about speaking no ill of other Republicans. So, that’s my goal.

Amanpour interjected that the GOP was in the middle of a "full-scale civil war," with Trump attacking Senate Minority Leader Mitch McConnell. She tried again to get Branstad on the record about the former president's lies. Branstad answered with more non-sequiturs, this time about the Iowa caucuses.

BRANSTAD: I have always been very welcoming. I welcomed Xi Jinping to Iowa. I welcomed presidential candidates of both parties as governor, and I want to keep the Iowa caucuses first in the nation.

And so we’re already looking at people that might want to come here and run in 2014 [sic]. And they’re all welcome. We want them to come early and often and get to know the people of Iowa, Iowans take their responsibility very seriously.

And I’m very proud of what we have been able to accomplish. And I want to work on restoring some civility and encouraging people to focus on issues, instead of attacking each other. And I really think it’s time to restore Ronald Reagan’s 11th commandment. I think that has served as well.

BRANSTAD: And I want to be a leader that works to bring people together, and to reduce taxes and regulations, and make this country the kind of leader that we want to be.

And we think that our alternative to what China offers is something that has appeal. And the transparency and openness of our system is so much better.

Let the record reflect that the U.S. has a better system of government than the repressive one-party autocracy in the People's Republic of China.

Branstad still hadn't clarified whether he supports Trump's false claims about the 2020 election. Amanpour tried a third time. She played a clip in which former Australian Prime Minister Julia Gillard asked rhetorically what the U.S. would be saying about another country where a leader incited a deadly riot to undermine the transfer of power.

AMANPOUR: And I think she put it pretty well. So, my final question to you is this. Do you believe that the election was stolen from Donald Trump, as he continues to say?

BRANSTAD: Well, first of all, we all condemn the violence. And the good news is, we did have a successful transition. The vice president and the people in the Congress did their job. And we are a great country. And this was a terrible tragedy. And we want to make sure that something like this never happens again in this country. And I know, regardless of people’s political persuasions, they condemn it and want to make sure that we continue to respect our political system in this country.

And I would point out, Iowa is the first in the nation. And Iowans take their responsibility very seriously. We want to keep the Iowa caucuses first in the nation, and we want everybody that wants to be a future leader in America to come to Iowa and meet the great people and have an opportunity to continue this great political system that we’re so proud of in America.

Since Branstad is eager to change the subject to the Iowa caucuses, here's some free advice for him and other Republicans desperate to keep our place in the presidential nominating process: you're not helping advocates of the current calendar when you won't acknowledge basic facts about the 2020 election.

Few Iowa interviewers would keep pressing after two or three evasive maneuvers. But to her credit, Amanpour tried one last time.

AMANPOUR: OK, so, Governor, I’m a little disappointed, because I asked you a direct question. You’re a senior Republican Party leader. You talk about Iowa, which is a major front-line election state. And you won’t tell me whether you think the election was fairly won by Joe Biden.

BRANSTAD: Well, first of all, the election is over. Joe Biden is the president. I accept that.

BRANSTAD: I think, first of all, that we want to look to the future. And we want to focus on what can be done in the interim — in the midterm elections, and then the next election.

And that’s what we have always done. And I’m very proud to say that I have been the one that has accepted and invited people to come here, and we want to continue to do that.

AMANPOUR: OK. All right, well, that’s a non-answer answer. But I do have to move on. We have some great guests coming up. Thank you for your time, Governor Branstad.

After watching this segment, a friend quipped that a suitable headline would be "Branstad Speaks Power to Truth." That sums it up pretty well.