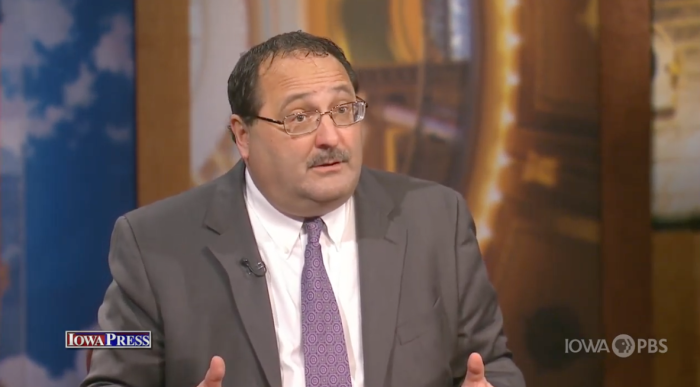 Kaufmann was the featured guest on the latest edition of the Iowa PBS program "Iowa Press," where panelists tried to pin him down on the 2020 election. The relevant portion begins around the 5:45 mark of this video. Kaufman sidestepped O.Kay Henderson's question about whether he agrees with Trump that the election was rigged. When the Iowa GOP chair alluded to Trump voters believing in "the same things that Republicans believe in," Henderson tried again.

Henderson: They also believe the election was stolen. Do you agree?

Kaufmann: I believe that we have a lot of work to do in a lot of states in order to make the election integrity believable. In politics it's all about perception and wherever the truth lies, we all know that we have problems in various states, we all know that Iowa did a pretty darn good job, some of which extended from what the legislature did at the end of the session last time. But we also have a perception issue. We have tens of millions of people that believe that Donald Trump, that the election was stolen from him. I think the easiest -- is for the various states to actually tighten up the election integrity.

Like Reynolds and Senators Chuck Grassley and Joni Ernst, Kaufmann genuflects to what tens of millions of Americans believe, without acknowledging that those beliefs are grounded in lies spread by Trump and allies with big megaphones. He cites that widespread delusion to justify more steps to suppress voting.

Murphy: But we only have that perception because President Trump is making these claims without evidence. Is that a reason to overhaul state election laws just because one candidate made unfounded claims of voter fraud?

Kaufmann: Well, I think Donald Trump -- Donald Trump's claims that were controversial is whether the election fraud and the election irregularities actually cost him the presidency. I don't think there's anybody that seriously doubts that in states like Georgia and Pennsylvania there were problems. I mean, in Iowa we had a good election. I'm here to tell you that I am satisfied with what we've done. But I'm also here to tell you that I hope that [Senate Majority Leader] Jack Whitver and [House Speaker] Pat Grassley take some leadership role in making it even better.

On the contrary, no one seriously doubts that Biden won Georgia, Pennsylvania, and every other state that cast its electoral votes for the Democrat. Republicans fully control state government in Georgia, including the elections office, and counted votes there three times, including a full recount by hand. There was no evidence of fraud in Georgia, which Biden won by 11,779 votes, or in Pennsylvania, where Biden was certified the winner by 81,660 votes, or anywhere else.

Some Republicans have complained that the expanded use of absentee ballots helped Democratic candidates, but that's not a reason to make voting harder unless you don't believe in democracy. Iowa has had no-excuse absentee voting for more than four decades.

Yepsen: I want to put a finer point on this question. Is Joseph Biden the legitimately elected President of the United States?

Kaufmann: Oh, as soon as the Electoral College was certified, yes.

Yepsen: And Donald Trump is the loser?

Kaufmann: Donald Trump did not win the Electoral College vote. That makes him, in American politics that makes him the loser of the 2020 election.

Yepsen: Don't Republican Party leaders like yourself have a burden here to explain that to people because other conversations are undermining the legitimacy of our democracy?

Kaufmann: But David, in terms of that explanation, to me it's so obvious that Joe Biden took the oath of office, there's no turning back from there. But here's what I worry about, if we say that Joe Biden won, if I say that there was absolutely not election problems, there was no fixes that are needed, then all of a sudden we just continue to do the same thing. And we don't work on voter identification, other states don't work on ballot harvesting, and those are all issues that we were working on long before Donald Trump was talking about losing the election.

Just like prominent Iowa Republicans have been doing since December, Kaufmann admits only that Biden won the electoral college--not that the American people actually elected him. Even worse, he promotes lies about "ballot harvesting" and supposedly insufficient voter ID in states the Democrat carried.

The reality is that Arizona, Wisconsin, Georgia, and Michigan all have stricter voter ID laws than Iowa already. Residents of those states didn't choose Biden because of "election problems." They preferred him to Trump.

Tamara Scott has represented Iowa on the Republican National Committee since 2012. Like the committeewoman she replaced, she's a proponent of various conspiracy theories. For example, Scott frequently uses her Facebook feed to raise doubts about mask wearing or other COVID-19 mitigation measures.

Since the November election, Scott has regularly aired Republican grievances about election administration in some states. Even since the January 6 insurrection at the Capitol, Scott kept claiming Biden didn't really win the election. This Facebook post from January 15 was shared dozens of times. 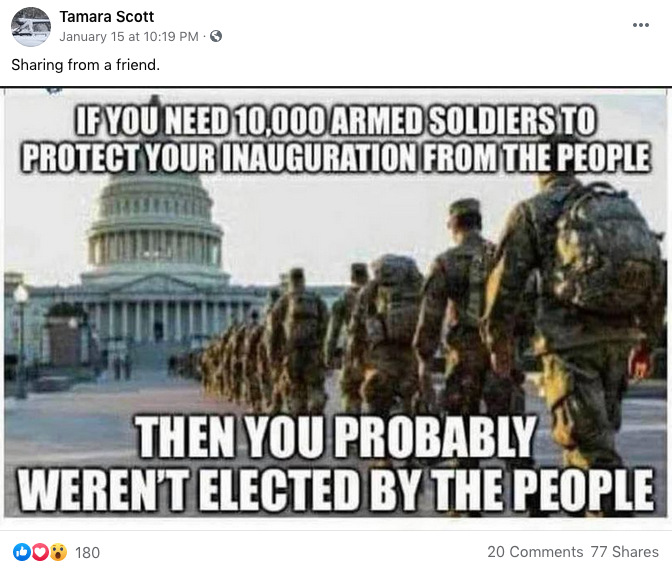 Around the same time, Scott amplified Texas GOP chair Allen West's claim that "The left targeted and encircled key Republican State legislatures in places like Georgia, Pennsylvania, Michigan, and Arizona, among others, and changed election law by way of governors, secretaries of state, and judicial activism." Speaking in her own voice on January 15, Scott said, "You may be able to steal an election, but you can't stop reality."

On the eve of Biden's inauguration, Scott shared this wisdom. 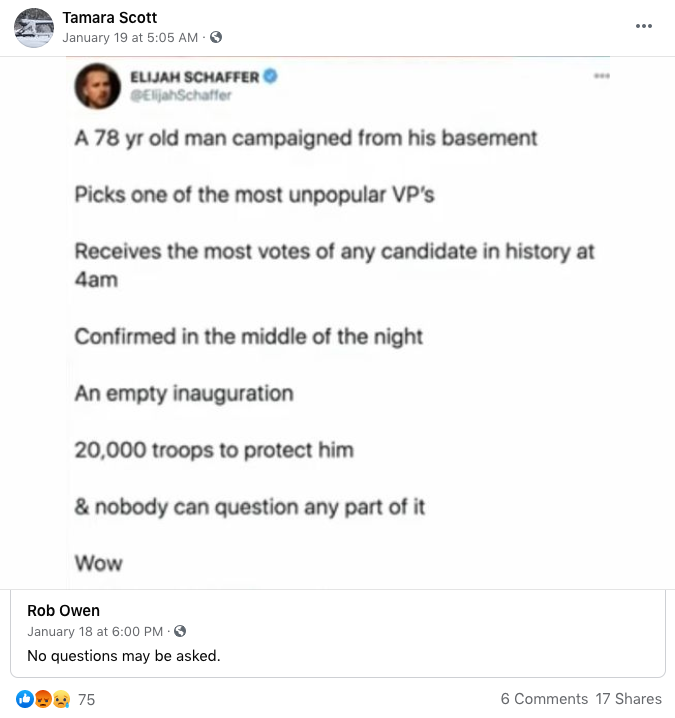 Scott has continued to beat this drum since January 20, posting links purporting to show "significant" election fraud and portraying Biden's presidency as a "coup."

On January 24 she expressed support for Marines who supposedly refused to salute Biden, adding, "If Marines are all about 'earning' respect, then 'earning' a post should also be valued, and frankly, many feel we never got to authenticate that vote - did we?"

Just yesterday, the RNC committeewoman urged Facebook friends to watch a "documentary" purporting to demonstrate widespread voter fraud and described as "prescient" her prediction last year that Trump would win in a landslide “If 2020 elections are fair and legal.” 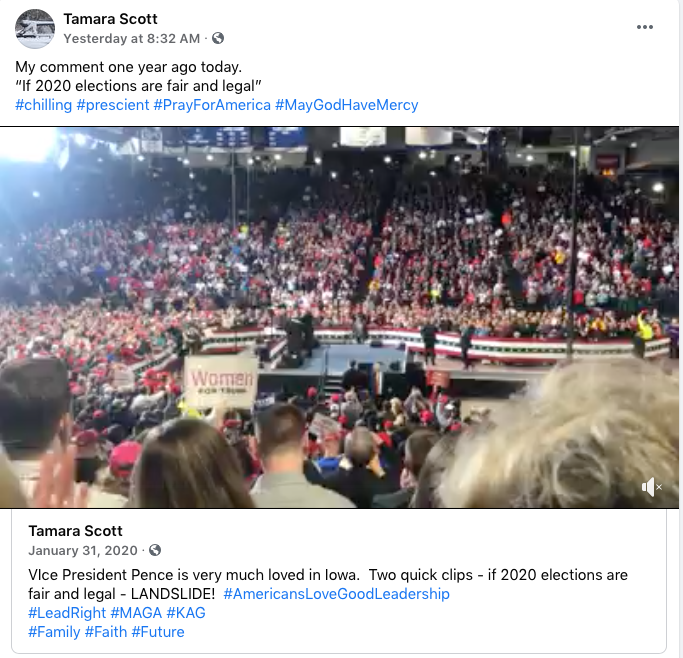 Scott added in that comment thread that former Vice President Mike Pence's "post election behavior was disappointing"--an apparent reference to Pence's refusal to say the election was stolen or attempt to use his position to overturn the result.

While top Iowa Republicans validate lies about the presidential election, former state legislator Dave Millage was hounded out of his role as Scott County GOP chair last month, Thomas Beaumont reported for the Associated Press on January 30. Millage's unforgivable sin? Telling a Quad City Times reporter that the January 6 attack on the Capitol was "disgusting," and that Trump should be impeached.

"I think the actions were despicable," Millage said. "I think it's atrocious conduct — the conduct of the president since the election has been decided and since the appeals have run their course. (Trump) should drop it, act like a leader and accept defeat. There might have been fraud, but there wasn't enough fraud to turn the election.

"If they respect the Constitution, they certainly weren't doing it (Wednesday.) Their conduct was abhorrent. We are supposed to be a constitutional republic; we're not a banana republic where the whims of congressmen can overrule the votes of the people. It's just appalling to me, their conduct. And for the president to egg them on is just atrocious conduct. But we're used to that with this guy."

Indeed, years of anti-abortion rights advocacy and devout party organizing didn’t shield the typically understated Iowa Republican from retribution. Within a day of declaring that Trump should be impeached for his role in the deadly Capitol riot, Millage was forced to step down as chair of the Scott County GOP.

While many Iowa GOP county organizations spread conspiracy theories with impunity, a local leader who declared Biden the election winner and denounced Trump's coup attempt was pushed out.

Kaufmann, Reynolds, Ernst, and Grassley could be telling the Republican base the truth about the 2020 election, or at least raising their voices in defense of Millage. Their silence is deafening.