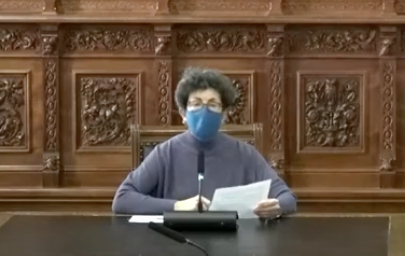 Why the rush to change Iowa's election law?

Janice Weiner is a community activist and city council member in Iowa City. The Iowa Senate approved an amended version of this bill, which cuts early voting in many ways, along party lines on February 23. A forthcoming Bleeding Heartland post will discuss those changes in detail. -promoted by Laura Belin

The draft bill aimed at fixing voting problems that don’t exist, which is moving through the Iowa legislature at breakneck speed, galvanized me to speak out. We had only two minutes each for public comment at the February 22 public hearing. This is the original slightly longer version of my remarks:

I come at this from many directions.

During my 26 years as a U.S. diplomat, I served places where people literally risked their lives to vote. When I spoke with them, I held up my home state as a shining example of making it easy to exercise the franchise.

I was an overseas absentee voter. After 9/11 our mail was cut off for weeks and weeks because of anthrax. Things happen – ballots are spoiled or need to be cured; the U.S. Postal Service slows to a crawl – auditors need sufficient time to react.

I’ve helped people in assisted living by turning their signed, sealed ballots in to the auditor’s office. They literally had no one else to do it.

And as a poll worker, I participated in a nonpartisan effort to ensure that all eligible voters could vote. There is no reason to usurp local control and threaten local election officials who dedicate their lives to helping people vote.

When the legislature last changed the voting laws in 2017, you shortened early voting then and instituted an ID requirement that only just went fully into effect.

Yet in the midst of a pandemic, Iowans voted in record numbers: 75.77 percent of eligible voters cast a vote. That’s awesome! Secretary of State Pate congratulated us. Our aim should be to overtake Minnesota, where nearly 80 percent of eligible voters voted, not to roll things back. We root for the Hawkeyes to bring home Floyd of Rosedale – why not challenge Minnesota for highest turnout?

Shortening the absentee window will disadvantage shut ins, snowbirds, those who are ill, domestic violence victims, the elderly, and many in rural areas, to name a few. And taking people off the voter rolls for missing one general election is simply unconscionable.

Yesterday would have been John Lewis’ 81st birthday. His life’s work centered on ensuring that people had the freedom to vote.

We in Iowa have the freedom to vote. It’s a cornerstone of our democracy. Our laws are not broken. There was no fraud. You are public servants who serve all Iowans. Why the unseemly rush? Just as Senator Ernst won her election and each of you won yours, President Biden won freely and fairly. The remedy for the Big Lie of a stolen election is not to take an axe to election laws that work exceedingly well – it’s simply to tell the truth.