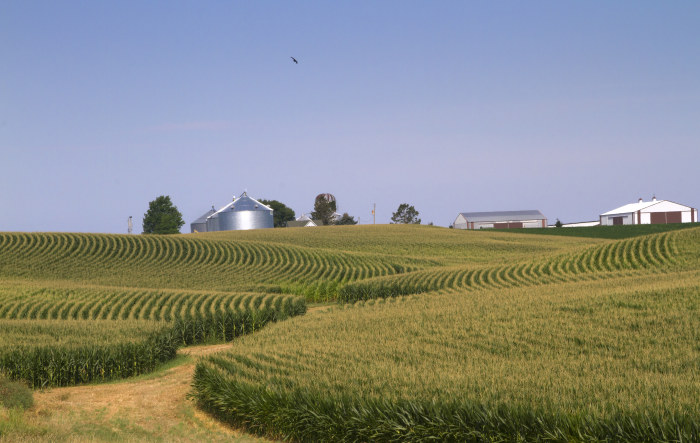 Under Trump, farm subsidies soared and the rich got richer

Taxpayer-funded farm subsidies have long been skewed in favor of the richest farmers and landowners. But under the Trump administration, even more money went to the largest and wealthiest farms, further shortchanging smaller, struggling family farms.

The Environmental Working Group’s analysis of records from the U.S. Department of Agriculture finds that subsidy payments to farmers ballooned from just over $4 billion in 2017 to more than $20 billion in 2020 – driven largely by ad hoc programs meant to offset the effects of President Trump’s failed trade war.

The staggering growth of subsidies and the worsening inequity in distribution underscore the urgency for the Biden administration and the new Congress to enact commonsense farm subsidy reforms that will benefit small, struggling farmers and the environment and make up for the mistakes of the Trump years.

The 2014 Farm Bill established two traditional commodity farm subsidy programs that send payouts to farmers every year. These programs, the Agricultural Risk Coverage program, or ARC, and the Price Loss Coverage program, or PLC, are triggered if crop yields or prices are lower than expected. Farmers can choose to take part in either ARC or PLC for the entire length of each farm bill, typically five years. Not every farm receives payments from these programs every year, but many do, and the programs send out billions of dollars annually.

ARC and PLC payments, from their inception in 2014 through 2019, the most recent year of payments, were $32.04 billion. But ad hoc subsidies far exceeded the total payments from those traditional programs in the final two years of the Obama administration and under Trump: a total of $49.08 billion in five years of annual disaster payments, two years of MFP payments and CFAP payments through October of last year. 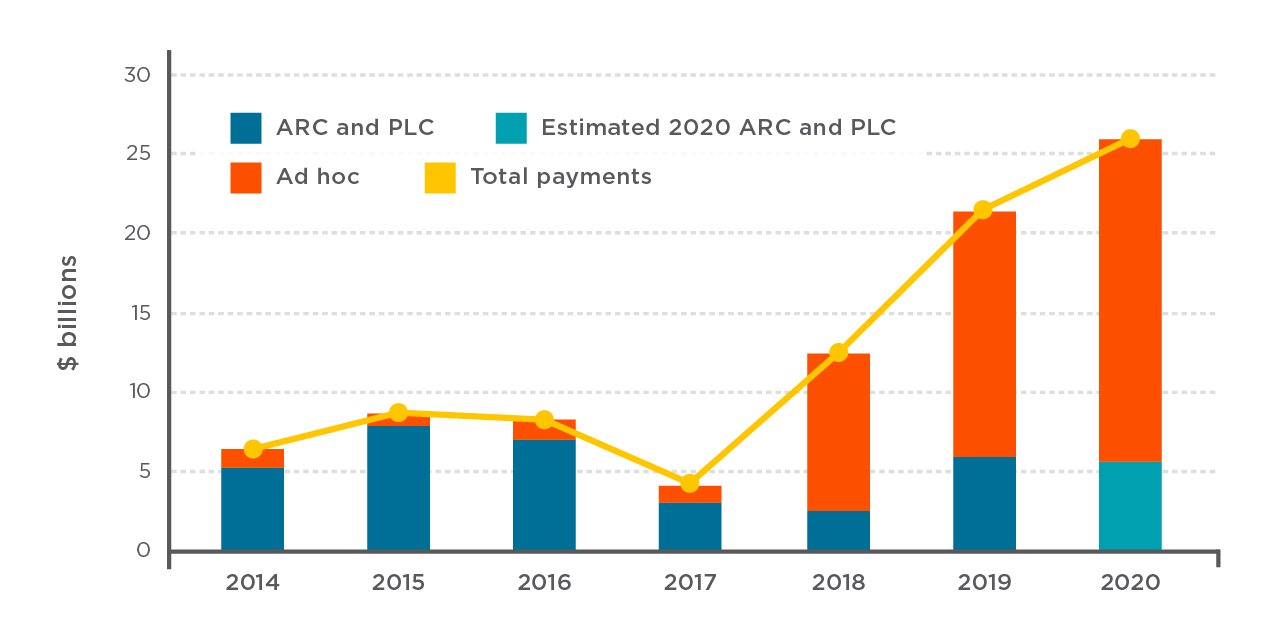 Source: EWG, from data obtained through public records requests to the USDA, and the Congressional Budget Office’s January 2020 Baseline for Farm Programs.

The majority of payments went to just eight states – Illinois, Iowa, Kansas, Minnesota, Nebraska, North Dakota, South Dakota and Texas. Farmers in those states received more than $41 billion, or 51 percent of the total.

An interactive map that can be viewed here shows annual county-by-county subsidy payments since 2014. The 10 counties that received the highest ad hoc payments together received over $1.6 billion.

The massive outlays of taxpayer dollars aren’t the only cost of wasteful farm subsidies.

Nationwide, nitrate contamination of drinking water – from nitrogen in fertilizer and manure running off farm fields – is a serious and growing health hazard. Analysis of USDA records shows how federal payments are subsidizing farms in counties with severe nitrate contamination.

For example, levels of nitrate in drinking water are especially high in the San Joaquin Valley of California, where communities with majority-Latino populations are the most likely to have high nitrate. Six of the 10 U.S. counties with the highest ad hoc subsidy payments are in the San Joaquin Valley – Fresno, Kern, Kings, Merced, Stanislaus and Tulare, which since 2014 received a total of $1.09 billion from disaster payments, MFP and CFAP.

Yet all of the traditional and ad hoc subsidies outlined above are only a part of the total payments American farmers receive every year. Federal crop insurance – a Depression-era ad hoc program written into law in 1980 – adds billions each year, and tends to pay farmers for the same reductions in crop prices as ARC and PLC. Conservation programs also make payments to farmers every year, but conservation payments are considerably smaller than farm subsidies or crop insurance.

The Largest Farms Get the Most Money

The USDA classifies 98 percent of all U.S. farms as “family farms,” but the top 0.3 percent are considered “very large family farms.” These biggest farms have a gross farm income of at least $5 million and in 2019 provided their operators a median household income of just under $1 million.

As USDA data shows, the great majority of both traditional commodity and ad hoc program payments go to the largest and wealthiest farms, which generally have considerable assets to fall back on in lean years. Small farms that struggle when crop prices are low or during the pandemic-triggered economic crisis get only a small portion of payments. It’s no accident: The programs are designed so that farms with the largest acres or crop production get the highest payments.

The ARC, PLC and CFAP programs had very similar payment concentrations. But compared to other Americans, do farmers need all this money?

In December, the USDA’s Economic Research Service forecast that when all data for 2020 is in, the median income for all farm households is expected to be $86,992. That’s almost 25 percent more than the 2019 median household income for all U.S. households of $69,703.

Just looking at income from farming, the huge ad hoc payments of recent years have made subsidies a large chunk of total farm income. 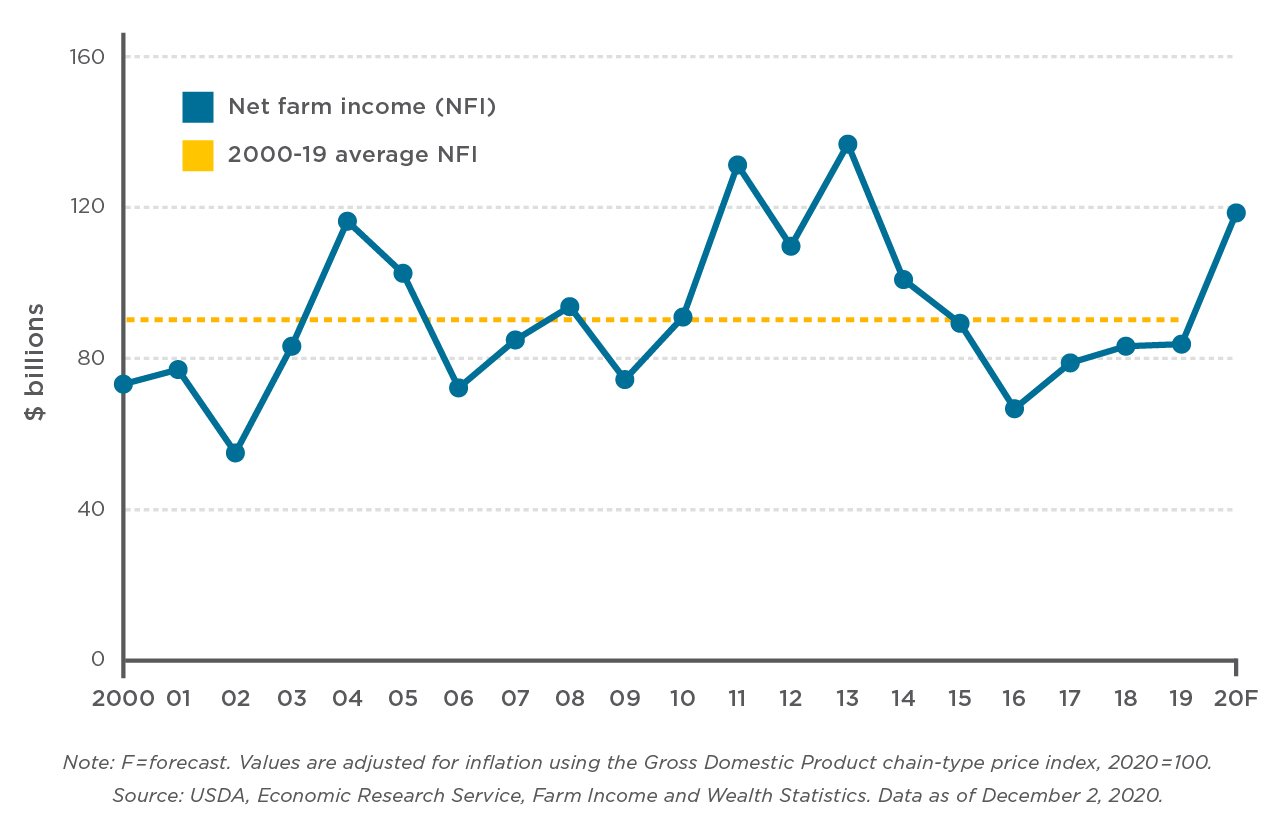 Yet during the pandemic and economic crises of last year, when millions of Americans lost their jobs, had to close their small businesses and struggled to put food on the table, taxpayers sent over $20 billion to farmers through CFAP, plus annual disaster payments. (Like other subsidies, CFAP payments went disproportionately to the largest and richest farms, rather for direct aid to hungry Americans.) And that’s before we know the figure for payments through ARC and PLC.

How To Fix the Broken Farm Subsidy System

The Biden administration and the new Congress have many opportunities to fix the traditional commodity farm subsidy programs of ARC and PLC, and to shift funding for the ad hoc programs into conservation programs that benefit farmers, all Americans and the environment. EWG recommends:

Anne Schechinger is senior analyst of economics for the Environmental Working Group. 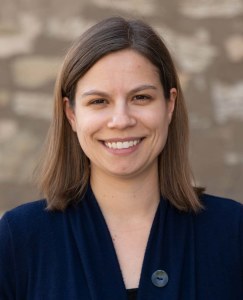 Top photo of an Iowa cornfield by Natalia Kuzmina, available via Shutterstock.