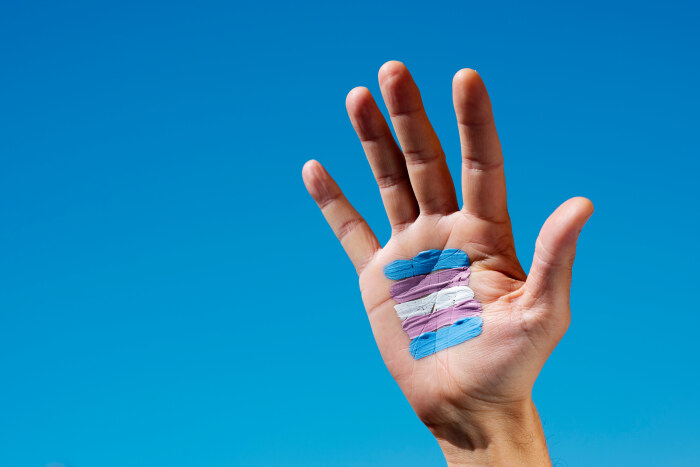 On this Transgender Day of Visibility, I want to take a moment to reflect on one part of Selzer & Co's latest Iowa poll for the Des Moines Register and Mediacom. The survey asked 775 Iowa adults whether they supported various Republican proposals, including this one: "Require public school students to use the restroom of the gender assigned at birth even if the student does not identify as that gender now."

Nick Coltrain summarized the findings: 47 percent of respondents said they favor restricting school bathroom use, 42 percent opposed, and 11 percent were not sure.

Republicans introduced three "bathroom bills" during this year's legislative session. They were among a record fifteen bills targeting the rights of LGBTQ Iowans. Although none of those bills made it through the legislature's first "funnel," they sent a distressing message to LGBTQ Iowans generally and trans youth in particular.

On one level, I was surprised to see that "only" a plurality in the Iowa poll would deny gender non-conforming people the right to use the restroom of their choice. Before the last decade or two, trans people were literally invisible in many Iowa communities. Growing up during the 1980s, I do not recall being aware of meeting any transgender person, even though I attended a large high school in Iowa's largest metro area.

I would guess that many of Selzer's respondents grew up like I did, not knowing anyone who would be adversely affected by being banned from using their bathroom of choice.

It's notable that a majority of Iowa women surveyed oppose the "bathroom bill" concept, even though proponents of such laws claim (with no evidence) that they are trying to protect women and girls from being attacked in restrooms. In reality, trans people are way more likely to be assaulted than to be perpetrators of assault. In the fourteen years since Iowa added sexual orientation and gender identity protections to the state's civil rights law, there have been no reported problems related to trans people using school bathrooms.

Nevertheless, a plurality of poll respondents, including most men and an overwhelming majority of Republicans, do want to impose their will on LGBTQ Iowans. Why wouldn't the GOP-controlled Iowa House and Senate take such action? Elections have consequences, right?

Iowa House Education Committee chair Dustin Hite didn't allow any of these proposals to move forward. Asked about the bathroom bills on the Iowa PBS program "Iowa Press" in February, Hite explained that he was worried about perceptions.

I've got a couple of bills that deal with that issue in my committee and I haven't assigned them a subcommittee yet. And the reason I haven't assigned them a subcommittee is not because I don't understand the issues of the proponents of those bills, but I also understand the issues on the other sides of those bills. And I think when we talk about topics like this we have to be extremely careful that what we are doing does not come across as hateful. And that is what I'm always concerned in these particular issues. So those bills have not been assigned a subcommittee in my committee and I don't necessarily believe that that's probably going to happen any time soon, if ever, this session.

Similarly, advocates for the business community warned earlier this year that certain Republican bills, including those targeting LGBTQ Iowans, were hurting Iowa's "brand" and ability to land investment deals.

While I appreciate that Hite buried these proposals, and that business lobbyists have discouraged Republican lawmakers from acting on their discriminatory impulses, a focus on Iowa's image obscures a larger point.

It's never ok to use political power to punch down on marginalized Iowans. Civil rights laws exist for a reason: left to their own devices, members of dominant groups will too often discriminate against historically disfavored groups, especially when those people represent a small percentage of the population.

Before the U.S. Supreme Court struck down state bans on interracial marriage, Gallup found a plurality of American adults favored laws making it a crime for white and Black people to be married to each other. But popular support didn't make those laws acceptable at any time in history.

Trans Iowans should not have to re-engage in these fights every year. Prominent Republicans including Governor Kim Reynolds should send a clear message that they won't allow the lawmaking process to be used to undermine anyone's rights. Not because discriminatory bills "come across as hateful" or hurt Iowa's "workforce development," but because every Iowan has equal value. Period.

Top image: Transgender flag painted on a hand, created by "nito" and available via Shutterstock.