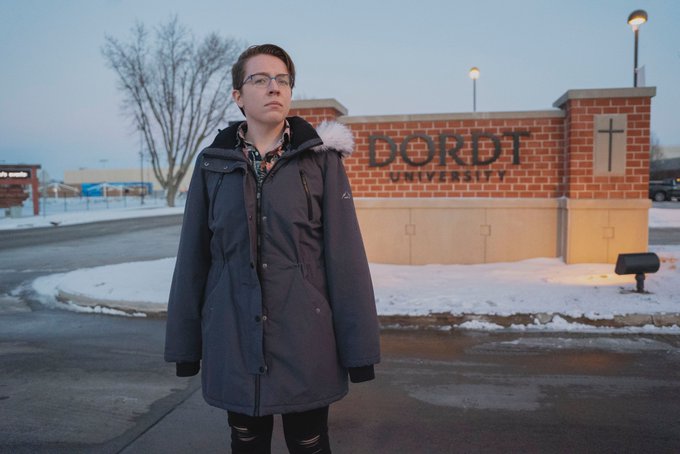 Two Iowa students are among the plaintiffs in a groundbreaking federal class action lawsuit filed this past week. The Portland-based Religious Exemption Accountability Project is suing the U.S. Department of Education and its acting assistant secretary for civil rights, seeking “to put an end to the U.S. Department of Education’s complicity in the abuses and unsafe conditions thousands of LGBTQ+ students endure at hundreds of taxpayer-funded, religious colleges and universities.”

Lauren Hoekstra and Avery Bonestroo are undergraduates at Dordt University in Sioux Center, one of 25 Christian institutions where the 33 plaintiffs are now enrolled or formerly studied.

AT ISSUE: USE OF PUBLIC FUNDS “TO HARM DISADVANTAGED PEOPLE”

The complaint filed in U.S. District Court in Oregon asserts,

The U.S. Department of Education is duty-bound by Title IX and the U.S. Constitution to protect sexual and gender minority students at taxpayer-funded colleges and universities, including private and religious educational institutions that receive federal funding. The religious exemption to Title IX, however, seemingly permits the Department to breach its duty as to the more than 100,000 sexual and gender minority students attending religious colleges and universities where discrimination on the basis of sexual orientation and gender identity is codified in campus policies and openly practiced.

Religious exemptions may be constitutionally permissible, or even compelled, when the government regulates private action, even where some amount of harm to members of the community is involved. However, when the government provides public funds to private actors, like the colleges and universities represented by Plaintiffs, the Constitution restrains the government from allowing such private actors to use those funds to harm disadvantaged people. This Constitutional principle remains true even when the private actors are operating according to sincerely held religious beliefs, and it remains true whether the people they are harming are racial or ethnic minorities, sexual or gender minorities or those who reflect multiple, intersecting identities.

The suit asks the court to declare this application of the religious exemption to Title IX unconstitutional for two reasons. First, it claims, “Laws that target a socially despised group for legal disfavor violate the Equal Protection of the laws guaranteed by the Fifth and Fourteenth Amendments.”

You can download the Religious Exemption Accountability Project’s full complaint here as well as declarations from Hoekstra and Bonestroo attached to the lawsuit. A theater major who will graduate this May, Bonestroo identifies as bisexual and genderfluid. Hoekstra identifies as queer and has one or two semesters remaining as they pursue a degree in secondary English education, with a minor in sociology.

Specific allegations of Dordt’s discrimination against LGBTQ+ students include:

In response to Bleeding Heartland’s inquiry, Dordt’s communications director Sarah Moss provided a statement saying the university was aware of the lawsuit but not a party to it. She added,

There are statements made in the complaint that do not represent the practices of Dordt University. As a Christian university, Dordt does maintain community standards which are obedient to Scripture. We seek to live these out with grace and truth—modeling Christ-like behavior in all areas of campus life. We pledge to extend compassion, care, support, and accountability for each member of our campus community as we develop into effective Kingdom citizens.

As we monitor this lawsuit in the days ahead, we will pursue our mission faithfully as we “equip students, alumni, and the broader community to work effectively toward Christ-centered renewal in all aspects of contemporary life.”

Moss didn’t answer follow-up questions seeking to clarify which allegations from the lawsuit don’t reflect the university’s practices. She repeated part of her previous message, adding, “Our goal continues to be that all our students feel safe, supported, and welcome.”

WHY ARE LGBTQ STUDENTS AT CHRISTIAN SCHOOLS?

Hoekstra discussed her decision to join the lawsuit in an March 31 interview over Zoom. I wondered why they chose to attend a conservative Christian school, instead of one of the many public or private colleges and universities that are supportive and welcoming to LGBTQ students. A lot of people have asked that question, Hoekstra said.

I am Christian. I do believe in God. And I do believe in the Bible. And so when I visited colleges, I went to a bunch of them around my area [Grandville, Michigan]… and when I visited Dordt, something about it just felt right. I loved the sense of community, the atmosphere that was so welcoming and loving and accepting.

Also, Dordt offered a major in animal science, which Hoekstra originally planned to study, and getting Christian material as well would be a bonus. “When I made the college decision, my sexuality wasn’t ever on my mind.” She didn’t know about the policies discriminating against people like her until her first semester as a Dordt student.

“I have stayed at Dordt, rather than leaving for another college, because many of my courses here would not transfer to another college, it would be difficult for me financially, and I have made friends here that I would lose or be distanced from if I changed schools.”

I put the same question to Paul Southwick, the director of the Religious Exemption Accountability Project and lead attorney on this case. Wouldn’t it make sense for these plaintiffs to study somewhere else, rather than being at Christian institutions that won’t accept them?

“That is the most common question” he and the students are asked, Southwick said in a telephone interview. The “very simple answer” is “They either want to go there, or they have to go there.” Conservative Christian families “are not immune to having LGBT+ children,” and those families are predominantly the ones who send kids to schools like Dordt.

For that reason, “There’s inevitably going to be queer kids at these colleges and universities.” Some of them want to go there because they are conservative Christians themselves–either repressing their identity or hoping the schools will change their sexuality. If they realize they can’t change who they are, they find themselves “stuck” in communities where they have friends or credits that won’t transfer, especially if they are close to completing their degrees.

“I DO REALLY LOVE DORDT”

I read out Dordt’s statement regarding the lawsuit to Hoekstra. She’d seen it already, because the university sent the same message to staff after news broke. The words felt like “propaganda,” she told me, as if Dordt was saying “we don’t actually do this,” and Hoekstra and Bonestroo were lying. That was “hurtful, because it felt like my concerns and my experiences at Dordt were kind of brushed off […] I think they could have responded in a more thoughtful and loving way toward queer folk who exist at Dordt.” Some other students at the school also aren’t heterosexual or cisgender, but they are generally afraid to be open about their identities.

Hoekstra believes “this lawsuit is really, really important to people like me, because existing in a Christian space as a queer person is very difficult and very painful.” She has struggled with mental health issues, partly because it’s hard to be around people who “think that my existence is a sin and I’m going to rot in hell, just for being alive. It doesn’t matter to them whether I have a girlfriend or not, I’m going to hell in their mind.” Being in a space where many see queer folks as “less than” is both alienating and lonely.

While some faculty have been supportive, others have not. “It is very hard to exist here sometimes. But I love Dordt a lot, and I want it to be a better place.” Hoekstra imagines that five years from now, some gay or trans kid could come to the school and not have to worry about whether it’s safe. That shouldn’t happen at a Christian university, because Christians “are called to follow the teachings of Jesus and the Bible.”

Aside from the exclusionary policies, has Dordt been a good place educationally? Yes, Hoekstra said emphatically, she’s learned a lot, in class and also talking with other people in the community. “It’s been lovely. I do really love Dordt. It’s just hard, it’s a love-hate relationship.”

I wondered whether the plaintiffs could be disciplined or even expelled for participating in the lawsuit. Bonestroo is set to graduate this May, but Hoekstra still has at least one and possibly two more semesters at Dordt. Hoekstra told me, “I’m not too worried, because I haven’t broken any rules.” Also, there would be a lot of blowback if Dordt kicked out “a vocal queer voice” in the community and on social media.

Although hostility toward LGBTQ+ people is widespread at Dordt, Hoekstra is prepared “to take the brunt of the pain and the hate” to make the school a better place for queer people who come after her. “We’re called to use our spiritual gifts for good, and I really think that me standing up for what I believe in, taking the pain from other people and bearing the burden, I think is what Jesus would want me to do.”

Southwick told me “it would be a real tragedy” if any Christian college expelled one of the parties to the lawsuit. He hopes schools will not “attack these kids for standing up for their rights.” However, three of the plaintiffs are so afraid of possible expulsion that they are using pseudonyms and not showing their faces on his organization’s website.

That level of fear illustrates why the Department of Education “needs to be able to intervene” in these situations, Southwick said. His organization hopes a ruling from a federal judge will “allow the dept to be more active in enforcing Title IX rights at these schools.” Currently, the department’s hands are somewhat tied, because the religious exemption is codified in statute, and the Trump administration adopted last-minute regulations “that make it very easy for schools like this to claim an exemption.”

I asked Southwick why he filed suit in in Oregon, rather than the U.S. District Court in Washington, DC. He explained that the plaintiffs live all over the country, and the U.S. Department of Education has jurisdiction over colleges and universities nationwide, so they could file anywhere. Southwick lives in Oregon, so it’s convenient to have court appearances there. “Also, the Ninth Circuit [Court of Appeals] tends to take a view of the Constitution and civil rights that aligns with our lawsuit.”

I wondered how U.S. Supreme Court’s June 2020 ruling in Bostock v. Clayton County, Georgia related to this lawsuit. In that case, a 6-3 majority held that “An employer who fires an individual merely for being gay or transgender violates Title VII of the Civil Rights Act of 1964.” The decision is “extremely helpful” to the new suit, Southwick said.

So that’s a very helpful piece of the puzzle. But Bostock did not address religious exemption issues.

Southwick added that their take on the religious exemption uses many of the same arguments the federal government itself articulated during the 1980s, regarding racial discrimination at some Christian institutions. Bob Jones University banned interracial dating, and the outcome of that litigation was that the federal government said they don’t have to fund racial discrimination, even if it’s based on “sincerely held religious beliefs.” The new lawsuit is “making that exact argument” regarding “oppression of queer and gender minority students.”