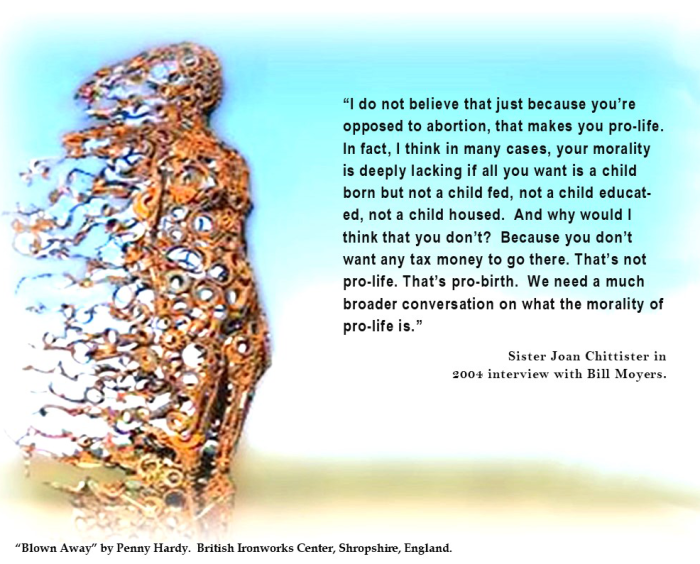 How to end abortion: make it unnecessary

Julie Ann Neely: Anti-abortion laws do not improve women and children’s lives or their safety, nor are they meant to support life. -promoted by Laura Belin

THE LONG VERSION: Criminalizing abortion tells women their bodies are not their own by codifying the radical idea that government is best suited to make decisions about their bodies, lives and healthcare.

THE QUESTIONS: Isn't the real, core issue unwanted pregnancies? Wouldn't it be more productive to focus our energies on preventing them?

Do Republicans really think criminalizing abortions will make them go away? It's not that simple. The ramifications of outlawing abortion go far beyond criminalizing one procedure. Anti-abortion laws do not improve women and children's lives or their safety, nor are they meant to support life. This article examines the complicating factors and negative effects of anti-abortion laws on interactions between women, medical professionals, and the legal system.

Pregnancy is not just morning sickness and an expanding waistline.  It changes almost every aspect of a woman’s life in a way that no man will ever experience. Her life permanently shifts focus as she adjusts to physical changes that affect almost every key bodily process and alters the trajectory of her life as new responsibilities claim priority on her future. By criminalizing abortion, the state will allow law enforcement and total strangers to intrude in a woman's personal life and sit in judgement of her lifestyle, how she makes medical decisions, and the day-to-day details of her life, such as food preferences, personal habits, and physical activities.

Because the U.S. Supreme Court is now stacked with anti-abortion ideologues, reversing the 1973 Roe v. Wade decision is a very real possibility.  Should this happen, Iowa's proposed constitutional amendment, House Joint Resolution 5, will ensure anti-abortion laws can no longer be declared unconstitutional.  Our government will have free reign to interfere with women's reproduction and all Iowa women will be the losers - including women who are single-issue anti-abortion voters, and their daughters and granddaughters.

House Joint Resolution 5 would have no immediate effect but paves the way for totally criminalizing abortion, should Roe v Wade be struck down. It proposes a state constitutional amendment that reads,

To defend and protect unborn children, we the people of the State of Iowa declare that this Constitution does not recognize, grant, or secure a right to abortion or require the public funding of abortion.

The majority party chooses to ignore pregnancy's complexities and the difficult - at times tragic - life issues that can lead to a woman's abortion decision. For Republicans it's simply a one size fits all authoritarian approach - criminalize it. This approach is short sighted. They ignore the studies that show legally induced abortions (0.6 deaths per 100,000) are markedly safer than childbirth (deaths 8.8 per 100,000). They undermine legislation that supports life and fail to acknowledge that abortion rates fell at greater rates during Democratic administrations than during Republican administrations.

If Republicans are sincere about protecting mothers and children, born and unborn, they would join with Democrats in their efforts to make abortion unnecessary by creating an environment that supports life for all people. It would mean addressing:

It strains credulity when Republicans tell us women’s well-being is a priority, since fail to warn us that criminalizing abortion will sharply increase the number of criminal prosecutions and forced medical interventions imposed on women who experience difficult pregnancies, miscarriages, and stillbirths. It is a pathway to legislation that will discourage physicians from providing necessary medical care to women suffering a miscarriage or stillbirth. Whether this bill's harm is intentional or is caused by willful ignorance, it is just plain wrong.

If this sounds overstated, consider this. Nearly all methods/procedures that are medically necessary for treating women who have health issues, or have suffered pregnancy complications, miscarriages, or stillbirths are the same methods used in therapeutic abortions.  Criminalizing abortion will have an inhibiting effect on physicians and act as an obstacle to needed medical care for women suffering from pregnancy loss. Physicians and other healthcare providers know all too well that one phone call from one anti-abortion zealot, who is sure he/she knows "truth" with a capital "T", can have law enforcement knocking on their door, and find themselves facing a criminal charge or scandal.

THE PAST AS PROLOGUE

In a Twitter post, David Avallone tells of his mother’s experience before the 1973 Supreme Court ruling - an experience not uncommon at the time.

My mother was big in the abortion rights movement. In the early 1960s, when abortion was still illegal, she had a miscarriage at around six months. So she's covered in blood, with a dead fetus between her legs, and the doctor told her she couldn't be cleaned up yet. GUESS WHY?

A full examination had to be done, and presented to a POLICE OFFICER, to prove my mom hadn't committed Manslaughter. Imagine that. Worst moment of your life, in pain, covered in blood, dead fetus. PLEASE WAIT LIKE THAT WHILE WE TREAT YOU LIKE A CRIMINAL.

His mother, Fran Avallone, told a reporter many years later, "I had to lay there with a fetus on the bed under me for an hour while the Board of Health came to certify I did not abort it [...]Things like that stay with me.”

IT'S TIME TO GET REAL!

Republicans are ignoring the reality of women’s reproductive health. They use inflammatory language, with little or no basis in medicine or science, that gets in the way of developing solutions that will make unwanted pregnancies a thing of the past.  No matter how they try to rationalize their stance, criminalizing abortion will result in a dangerous medical and legal environment for women that will:

STEP TWO  - Women Be Warned - BIG BROTHER MAY BE WATCHING!

House File 515 is Orwellian. All women would be affected by this law. If passed, Iowa would hire an outside contractor to use “…proven search engine marketing techniques to reach pregnant women in real time….”  In real life, this would mean existing social media algorithms would not only track women’s preferences in clothing, food, etc., they would be able to monitor women’s personal discussions, healthcare, and reproductive decisions. (Editor's note: The bill did not advance past a legislative deadline.)

Really?! Do we want the government prying into whether we got our period – or - snooping into our private conversations with friends or family about such things as concerns about a problem pregnancy. It's not as far-fetched as it sounds.

Roe v. Wade has made it easier, and legal, for women to control their reproductive destiny; however, it did not eliminate the practice of bedside interrogations, coerced medical interventions, arrests, and criminal prosecution.  Although the US Supreme Court in 1973 explicitly rejected the claim that…” fetuses, even after attaining viability, are separate legal persons with rights independent of the pregnant women who carry, nurture, and sustain them…”, many states have misrepresented the decision.  States justify intervention by asserting that viable fetuses, and sometimes non-viable fetuses, must be treated as a person separate of the pregnant woman.

In states where laws interfering with abortion are declared unconstitutional, many use existing laws, enacted for other purposes, to bring legal action against women. Unless we prevent anti-abortion legislation from becoming law in Iowa, we can expect to see events like the following:

These four cases are a sampling of 413 fully documented cases disclosed in Arrests of and Forced Interventions on Pregnant Women in the United States, 1973–2005: Implications for Women’s Legal Status and Public Health, by Lynn Paltrow and Jeanne Flavin. Unfortunately these intrusions still occur; there are hundreds more that have not been as thoroughly documented.

IS THIS OUR FUTURE?

Since ancient times, women all over the world have used a variety of methods to control their fertility - legal or not.  Some methods were more successful than others; many women died as a result. Criminalizing abortion will not stop abortion. It will create a legal and medical environment that criminalizes pregnancy loss, denies women's bodily integrity (which is rigorously protected for men) and limits physicians and medical professionals from providing the highest quality medical care to women suffering from pregnancy complications and loss. Ultimately the real questions should be:

If the answer is government, then let's address the fact that a fertilized egg involves a man and a woman. If government is to assess criminal responsibility, isn't it only fair to discuss men's role in unwanted pregnancies? In a society that glorifies male sexual prowess, shouldn't men be held accountable and also risk criminal liability? Think about it - if we are to be fair, why shouldn't the government make decisions about men's bodies? Would government mandated vasectomies be any more radical than allowing the government to tell women that their bodies are not their own? How about a quota system to reign in male promiscuity and carelessness? Vasectomies can be reversed.

And, how about making male contraceptives a national health priority. Insurance companies are eager to cover profitable erectile dysfunction drugs yet have had to be forced to cover female contraception. Surely it's possible. When made a priority, pharmaceutical companies came out with a COVID-19 vaccine in a year, why not the same intense effort for male contraceptives? In 2016 male contraception studies were halted when too many men dropped out of those studies because they weren't willing to put up with the side effects similar to those experienced by women. Women cope with them because the stakes are much higher for us; we are the ones who bear the brunt of pregnancies, wanted and unwanted. Isn't it time to level the playing field.

Today’s medical advances, including contraception, have given our daughters and granddaughters the freedom to look to a future full of possibilities that their grandmothers and great grandmothers could not have imagined. Will they thank us if we allow that freedom to be taken away from them? Republicans have taken two big steps to do just that.

If we are to prevent them from succeeding, we must protest loud and long to our state representatives, senators and the governor, and encourage others to do the same. And we need to work to replace them in 2022 with leaders who will truly support life and strive to make abortion unnecessary. The future of our daughters and granddaughters, out to seven generations and beyond depend on it.

Julie Ann Neely is a longtime independent feminist/environmentalist/activist, now Democrat, who became politically active in retirement because she is worried about her grandchildren’s future and believes our democracy is in danger.