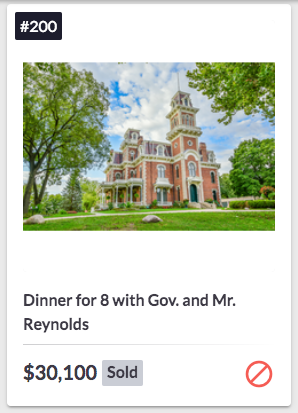 Unanswered questions about the $30,100 dinner with Kim Reynolds

Governor Kim Reynolds made headlines on April 8 by telling a conservative talk radio host Iowa had turned down a request to shelter some unaccompanied migrant children in federal custody. “This is not our problem. This is the president’s problem,” Reynolds explained.

“No one will ever confuse Reynolds with Gov. Robert Ray,” observed political cartoonist Brian Duffy. “This is surely the low point of the administration of Iowa Gov. Kim Reynolds,” noted longtime commentator Chuck Offenburger. Many other Iowans were disappointed or even “ashamed” by the governor’s lack of compassion.

But never let it be said that Reynolds lacks any charitable impulses. Thanks to her willingness to donate her time and the use of a state-owned building, the private Des Moines Christian School raised $30,100 at its True-Blue Gala auction last night.

Reynolds donated dinner for eight with herself and her husband at Terrace Hill, the governor’s official residence. When I learned about the Christian school’s auction on April 5, the experience was going for $1,500. By the next morning, the top bid was up to $8,050. Someone had bid $15,000 by the afternoon of April 6, when I asked the governor’s spokesperson Pat Garrett a number of questions about the planned dinner. He didn’t reply to that message or to a follow-up email on April 9.

The top bid for dinner with Reynolds and her husband was $21,000 by the evening of April 7 and stayed there for three days, as news of the auction gained a wider audience thanks to Iowa Capital Dispatch and the Axios Des Moines newsletter.

But one or more big spenders slipped in under the wire. Someone snagged the “priceless” experience for $30,100 before bidding closed on April 10. 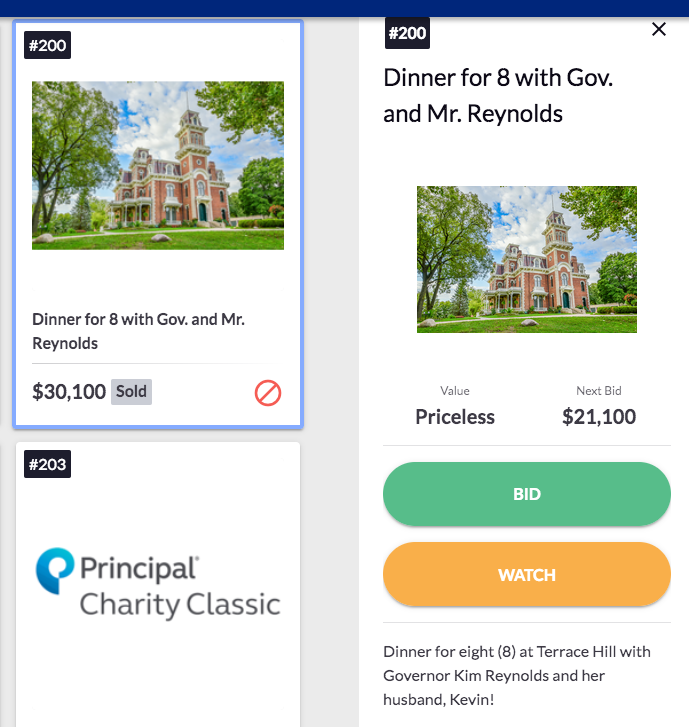 This event and others like it raise many questions.

1. How many times has the governor donated in this manner to nonprofits?

Ryan Foley reported for the Associated Press in February that in 2019 the governor “auctioned off an afternoon of her time,” including lunch at Terrace Hill and a tour of the state capitol building, for the Deb and Jeff Hansen Foundation. That charity is named for its founders, the Iowa Select Farms owners who have donated nearly $300,000 to Reynolds’ campaign. The winning bidder (at $4,250) was Gary Lynch, also a major donor to Reynolds, and a founder of a different charity she has supported. From Foley’s article:

Reynolds spokesman Pat Garrett said the event was one of many in which the governor auctioned off meals and tours for charity in 2018 and 2019, before she paused the practice during the pandemic.

Others that benefited included educational, civic and medical groups, such as the Leukemia & Lymphoma Society and the Science Center of Iowa. Reynolds also participated twice in the annual charity auction of grocery store chain Hy-Vee.

“All of these are great causes that help people in need,” Garrett said.

I asked Garrett for a full list of nonprofits Reynolds has supported in this way but didn’t hear back. The governor’s office should publish that list so Iowans can see who has benefited from the practice and who submitted each of the winning bids.

Attorneys who worked for Democratic Governors Tom Vilsack and Chet Culver told Foley those governors never auctioned off access to the governor, much less in a public building or for a charity linked to a campaign contributor.

2. Who reached out to Reynolds about donating to the Des Moines Christian School’s fundraiser?

School officials did not respond to Bleeding Heartland’s inquiry.

Searches of Iowa’s campaign finance database did not reveal any donations to the governor’s campaigns by any current Des Moines Christian School Board members.

3. Has Reynolds ever donated her time to a fundraiser for public schools in Iowa? If so, which ones?

Many schools and parent-teacher organizations hold annual fundraising auctions. Similar events at my children’s public school in Des Moines never raised anything close to $30,000 for a single item. (Note: the item that raised the most for the Des Moines Christian School this year was a reserved spot in the elementary school’s parking lot, which went for $44,950.)

4. Has Reynolds ever donated her time to fundraisers for other private or parochial schools? If so, which ones?

Governor Terry Branstad (Reynolds’ mentor and predecessor) auctioned off dinner for four at Terrace Hill to benefit a Catholic school in Boone in 2016, Clark Kauffman noted in his Iowa Capital Dispatch article about the Des Moines Christian School auction.

5. Has Reynolds turned down requests to donate her time to any fundraisers for Iowa schools? If so, for which schools?

Readers with knowledge of other schools’ unsuccessful attempts to secure the governor’s fundraising help are encouraged to reach out to Bleeding Heartland.

6. Will all members of the top bidder’s dinner party be required to be vaccinated for COVID-19 before coming to Terrace Hill for dinner? If not, how will the governor keep Terrace Hill staff safe during this indoor dining event?

Reynolds and the “First Gentleman” Kevin Reynolds received Johnson & Johnson’s COVID-19 vaccine in early March. But opinion polls show many people, especially white Republicans, do not plan to be vaccinated for coronavirus. In Selzer & Co’s latest Iowa Poll for the Des Moines Register, 27 percent of Iowa respondents including 41 percent of self-identified Republicans said “they don’t plan to be vaccinated.”

Incidentally, the governor’s residence was closed for public tours during the early months of the pandemic. Terrace Hill reopened last July with strict COVID-19 mitigation policies in place. For instance, tour groups were limited to six people, all of whom had to live in the same household. Those guidelines remained in place through December. (Terrace Hill is closed for tours every January and February.)

Soon after Reynolds lifted all capacity restrictions and social distancing requirements for Iowa businesses in February, Terrace Hill’s administrator told me the facility would reopen for tours in March under the July 2020 guidelines, to protect the safety of volunteer tour guides. However, later the same day the governor’s spokesperson Garrett said Terrace Hill’s “website will be revised by the time tours resume in March – will not be the same guidelines from July 2020.” Now there is no limit on tour group size, though some social distancing requirements remain in place. Visitors are encouraged but not required to wear face masks.

7. Who will pay for the food and staffing costs associated with the dinner donated to the Des Moines Christian School?

The state’s annual budget includes an appropriation to cover the costs of Terrace Hill staff. But public funds should not be used for an event benefiting a private organization. Article 3, Section 31 of the Iowa Constitution states that “no public money or property shall be appropriated for local, or private purposes, unless such appropriation, compensation, or claim, be allowed by two-thirds of the members elected to each branch of the General Assembly.”

8. When did the governor resume auctioning off her time for charities? Was this week’s auction the first similar event since last year?

As mentioned above, Garrett told the AP’s Foley that during the pandemic, Reynolds stopped letting charities raise money for the chance to spend some time with her. Iowans have a right to know when this practice resumed and which other organizations, if any, have benefited.

I’ll update this post as needed if further information becomes available, such as the identity of the person who paid $30,100 for a dinner party at the governor’s residence.

UPDATE: Christopher Line, staff attorney for the Freedom From Religion Foundation, wrote to Reynolds to express “serious constitutional concerns” about the fundraiser. You can read the whole letter here. Excerpt:

While your charitable goals are commendable, the evangelical mission of Des Moines Christian School makes it a poor choice for endorsement by a government official. You may not use your position as governor or the governor’s mansion in order to fundraise for a private religious school. Our Constitution’s Establishment Clause—which protects Americans’ religious freedom by ensuring the continued separation of religion and government—dictates that the government cannot in any way endorse religion. As the Supreme Court has put it, “the First Amendment mandates governmental neutrality between religion and religion, and between religion and nonreligion.” McCreary Cty. v. ACLU, 545 U.S. 844, 860 (2005); Wallace v. Jaffree, 472 U.S. 38, 53 (1985); Epperson v. Arkansas, 393 U.S. 97, 104 (1968); Everson v. Bd. of Educ. of Ewing, 330 U.S. 1, 15-16 (1947). We request assurances that you will not use your position as governor, or any government resources to financially support or endorse organizations with religious missions again in the future.

Appendix: Unanswered April 6 email to Governor Kim Reynolds’ spokesperson Pat Garrett, who also did not reply to a follow-up email on April 9 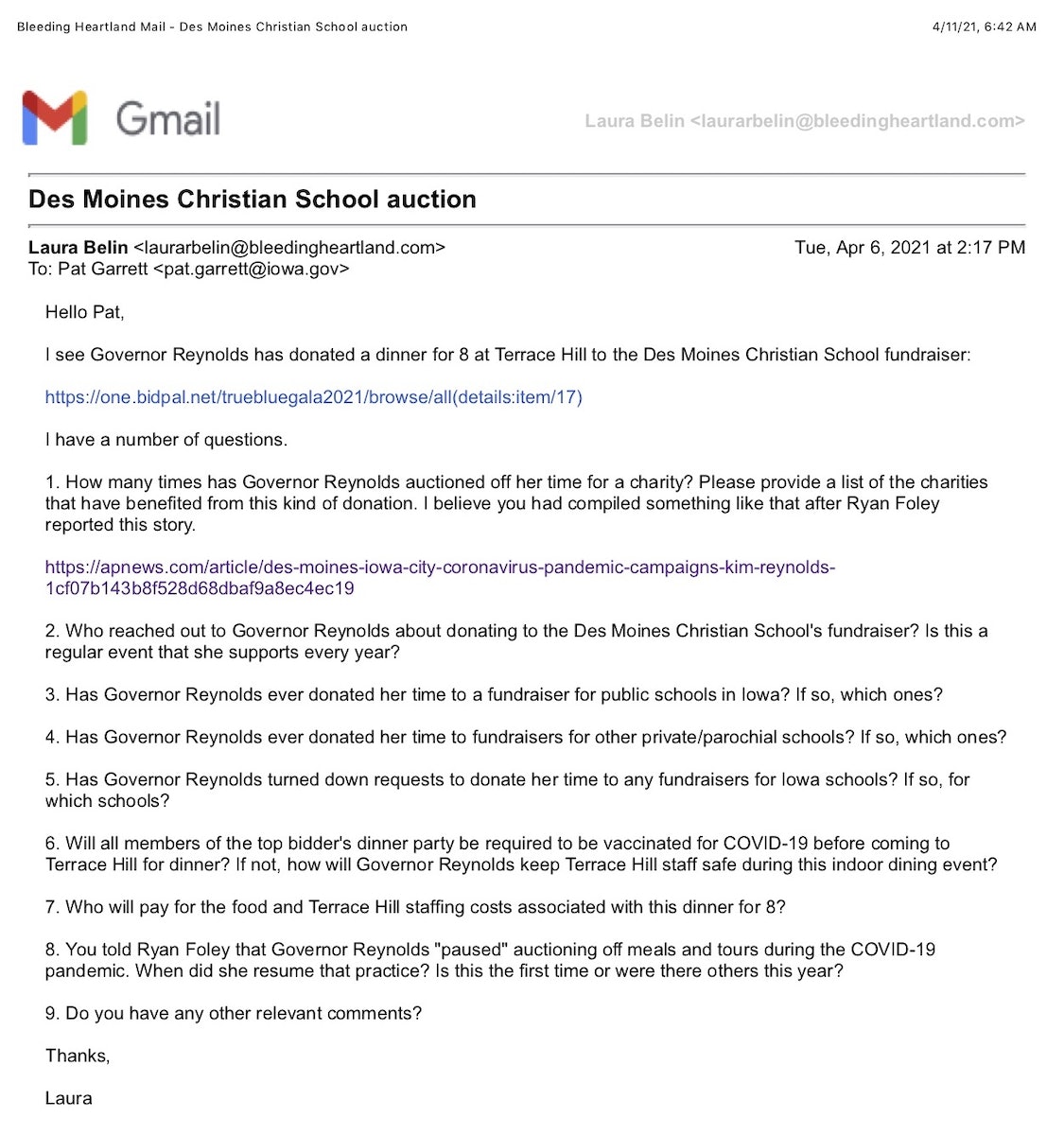