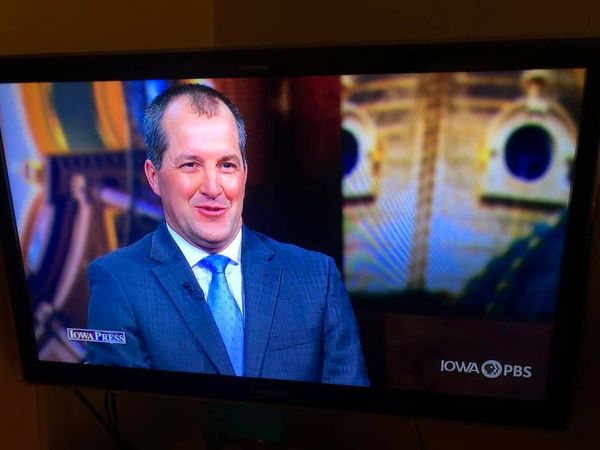 John Norwood is a soil and water commissioner in Polk County. -promoted by Laura Belin

Iowa Secretary of Agriculture Mike Naig was the guest on the latest edition of the Iowa PBS program "Iowa Press." The first exchange was revealing.

From the Iowa PBS transcript (click through to watch the video):

[Kay] Henderson: Mr. Secretary, this past week Iowans saw and heard that a national organization has classified the Raccoon River as one of the ten most endangered in the country due to ag runoff. What is the answer to fix that?

Naig: Well, first of all, that so-called report was a bit of propaganda, I think. It was obviously a Washington D.C. based advocacy organization, they can go out and say what they want to, but what they talked about related to Iowa is not based in fact. We're moving in the right direction. We've got a lot of focus here in Iowa historically leading the nation in efforts around soil erosion prevention and now leading the way on water quality as well. The Nutrient Reduction Strategy was finalized in 2013. And we're focused every day on working to get more practices on the ground across the state. That's the answer. We've got a long ways to go and I don't sugar coat that at all. There's a lot of work to do. The strategy calls for a 45% reduction in nitrogen and phosphorous loss off of Iowa farms, Iowa landscape. That's a big number, not easily achieved, going to take time and focus. But the evidence is moving in the right direction. 2 million acres of cover crops. It has taken us 15 years to build 100 wetlands, we've got 50 under development in the next couple of years and we'll double the number of bioreactors and saturated buffers in one project in Polk County this year. That is acceleration. That is where we need to go. We're focused on it every day.

[Clay] Masters: At the same time, on the topic of the Raccoon River, the head of the Des Moines Water Works says the state is heading towards catastrophe with that river. What do you say to the people that drink that water?

Naig: Well, first of all, farmers are the closest to the landscape, they live in these areas, they are concerned about the water and the soil in their community and their water shed. And frankly, it's one of those we talk a lot about the fact that agriculture drives our economy. Well, what drives our agriculture? It's our soil and water. And so the long-term focus on preserving those resources is critically important. It is true that we're all connected to each other via a water shed. And what I would say about the work in the Raccoon and the Des Moines River water sheds is this has been a focus area for us as a state for the last several years, great work happening all across that region. You're talking well over a million acres of land in that Raccoon River water shed and hundreds and hundreds of farmers. So the work is ongoing. There's more to do. And we do recognize of course we have an impact downstream.

[David] Yepsen: How can you call it propaganda when there are people in the Des Moines area that don't want to drink the water here? When you've got the director of the Water Works who calls it a catastrophe on the horizon? Is this just a farm leader in Iowa blowing off environmental concerns?

Naig: Absolutely not. And that report itself, the way that those types of reports come out with no basis, they were nominated by an activist group here in Iowa. It's a fundraising plea for this organization. Again, they can do that, I'm not saying they can't. But if you want to talk facts you have to ignore a lot of evidence, a lot of evidence that says we're moving in the right direction, that work is actually getting done every day on the ground. Folks first of all shouldn't feel worried about the safety of drinking water in Des Moines. The Des Moines Water Works exists for the express purpose of providing safe drinking water for the community, for their rate payers, and they're doing that job. It's the law that they should. So we're working in the area.

The logic that our drinking water will be fine because the law requires the Des Moines Water Works to provide safe drinking water escapes me. Let’s ask the people of Flint, Michigan how that worked out. Lake Erie, Chesapeake Bay ring any bells for source water at risk?

Moreover, the dismissive attitude that having kids swimming in our rivers will be good for Des Moines (as with the planned water trails) is also troubling. The Des Moines River is unusable for drinking water in Des Moines during summer stretches because of toxic algae. There are increasing amounts of antibiotic resistant bacteria in our rivers, yet we think a whitewater course in Des Moines is a good idea? Would Secretary Naig want his own kids to splash in that river?

I was glad Naig mentioned our Polk County systems approach to saturated buffers as evidence of accelerating progress. We’re going to blow the doors off the state’s installed base. Our new targeted, bundled, systems approach to delivery--moving from a few to 50 to 100 installations at a time--took vision and leadership.

Where did that leadership come from? Not the state. It was conceived by a team I pulled together, because the state's current pace and approach cannot move the needle in a timely way. Little strategic thinking. Our nutrient reduction strategy is not a strategy. It's simply a menu of things which could be done.

Many of the choices are infeasible, politically, economically, technically. We need to focus. We have 23 million acres to address and 3,700 drainage districts to modernize. The Iowa Department of Agriculture and Land Stewardship (IDALS) doesn't even use basic accounting software for our Soil and Water Conservation Districts office, despite repeated requests--even after two cases of fraud around the state. They are back in the stone ages, using a cobbled together excel file with poor financial controls, transparency and utility.

This is our IDALS. Good people. Poor leadership. Little vision. Snail's paced execution. An agency that is little more than a cheerleader, mostly for the way things are.

That’s just one example where new thinking is required. We need vision in Iowa’s Secretary of Agriculture position. Someone who can help Iowa farmers find a smart path forward and align federal, state, local and private sources of funding to support a new vision for Iowa agriculture and land stewardship, with outcomes that drive profitability, resiliency, and diversification. Someone who understands we need new financially driven approaches to retain our soils (which we are losing at ten times the replacement rate), manage our waters using scientific and business management six sigma methods (a la famed management guru Ed Demming), and restore balance to an unbalanced system.

We need to do this smartly and efficiently while helping producers focus on improved profitability, instead of chasing corporate driven yields. Remember Kodak film? Mike Naig reminds me of the last Kodak salesman.

With electric vehicle production picking up steam, consumers demanding cleaner food production, increasing frequency of severe weather, local safe drinking water concerns and more, Iowa agricultural interests should think carefully about policy choices. From my vantage point as an elected soil and water commissioner representing 400,000 residents, I see our top elected officials (from both parties) making short-sighted decisions. Too often they pander to corporate interests and come from places of wishful thinking not grounded in the world we live in (awash in carbon) or where we are heading as a society.

I am optimistic that with collective action and forward thinking leadership, we can and will do better. Stay tuned for more authentic, questioning views from your Polk County elected soil and water commissioner. My bullshit meter works pretty well because I can see directly inside to what's happening. Or more accurately, what's not happening.