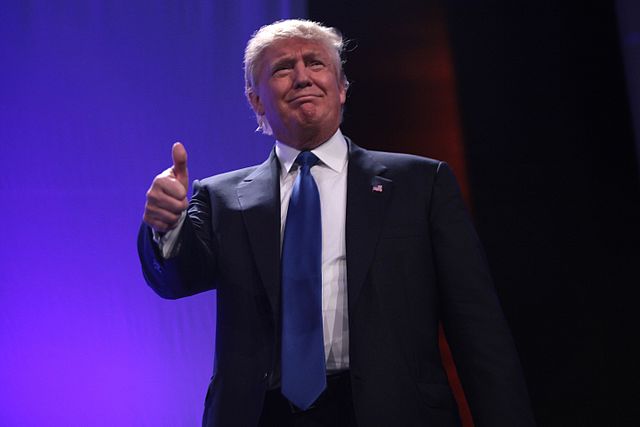 New GOP commandment: Thou shalt have no gods before Trump

Herb Strentz: In practice, not speaking ill of any Republican means not holding one another accountable for what they advocate. -promoted by Laura Belin

The Republican Party continues its handiwork on the Ten Commandments Moses received from Jehovah some 3,500 years ago. First came the so-called eleventh commandment in 1966: “Thou shalt not speak ill of any Republican.”

A new version of the first commandment emerged over the past five years: "Thou shalt have no other gods before Trump.”

More political than theological, here’s a take on the GOP handiwork.

Like their GOP counterparts around the nation, Iowa Republican leaders would have us believe they abide by their so-called eleventh commandment, supposedly in the interests of civility and party unity. In practice, however, that commandment is more an escape hatch from accountability.

The commandment typically is credited to the late President Ronald Reagan, handed down when he ran for governor of California in 1966. However, Reagan acknowledged the author of the commandment was neither himself nor Jehovah. Rather, it was then California Republican Party Chairman Gaylord Parkinson, who sought to cope with divisiveness in the GOP.

Parkinson even had a postscript to the commandment: "Henceforth, if any Republican has a grievance against another, that grievance is not to be bared publicly."

But Iowa Republicans like Senators Chuck Grassley and Joni Ernst and Governor Kim Reynolds don’t mind winging it on the eleventh commandment. They’ve been silent when Donald Trump violated the precept as a Republican candidate, president, and past president more often than he violated other Mt. Sinai commands. In April, he called Senate Minority Leader Mitch McConnell a “dumb son of a bitch.” He had castigated several of his rivals for the 2016 GOP nomination. Senator Marco Rubio was “little Marco,” Senator Ted Cruz was “Lyin’ Ted,” among other disparagements of “fellow” Republicans.

When many Republican office holders are asked to hold one another accountable, they take to the eleventh commandment escape hatch, refusing to speak ill of another Republican. They cite the principle to duck questions about problems in proposed GOP legislation or policy, on many salient issues.

Except of course when the legislation, policy, or issues are raised by Democrats.

Grassley sidesteps references to the certifiable GOP’s right wing of white supremacists. However, he fantasizes of a left-wing “base” comparable to the Trump faithful at the January 6 insurrection at the U.S. Capitol. Commenting on President Joe Biden's address to members of Congress on April 28, Grassley said “he knows President Biden is capable of being a bipartisan dealmaker from his time in the Senate. He says the question is: will the president’s left-wing base let him do it?”

The new first commandment, “no god other than Trump,” is evidenced by the party still considering him a candidate for nomination in the 2024 presidential election. They make pilgrimages to Trump’s Mar-a-Lago in Florida, the GOP version of Mt. Sinai and Jerusalem combined.

Reynolds had the vision of the future when she lamented that she and the State of Iowa did not join other liars in a lawsuit that sought to overturn the 2020 presidential election.

Grassley chimes in, defending white supremacists and other hate mongers. He complained about steps taken by information networks on the internet to not knowingly publish lies. To Grassley, being mindful of the truth was not so important as to warrant deviation from worship of Trump. Discretion and ignoring evidence outweigh truth.

Iowa's senior senator criticized the effort to halt wide spread dissemination of hate and lies on the internet because, “It doesn’t take into consideration the discretion of American people to make a judgment of what they ought to believe or not believe.”

The eleventh commandment, Parkinson and Reagan likely would say, was issued to prevent personal attacks and condemnation of an individual and to facilitate debate on issues. The focus on issues and not on personal attacks was exemplified by Senator John McCain in 2008, when the Republican presidential nominee scolded a GOP partisan for her error-filled condemnation of his Democratic opponent, Senator Barack Obama. McCain said Obama was a “decent person and a person that you do not have to be scared of as president of the United States.”

As a harbinger of politics today, many in the crowd booed McCain for saying that.

In practice, not speaking ill of any Republican means not holding one another accountable for what they advocate.

Generally, how this plays out in the news media is that the Democratic Party is depicted as torn by division as its leaders dare to hold one another accountable for their stands on issues of importance to the nation. Meanwhile, the Republican Party is reported as bent on raising enough money and “reforming” voting laws to assure Trump a dry path across the Potomac River as he returns in grandeur in 2024.

So no GOP leader in Iowa spoke out on the harebrained notion of U.S. Representative Marjorie Taylor Greene that wildfires in California were caused by space lasers operated by Jews. More recently, she introduced legislation “to award three Congressional Gold Medals to the heroic law enforcement officers and those who protect American cities from Black Lives Matter (BLM) terrorists.”

A few weeks later the Arkansas lawmakers overrode another veto on a matter likely dear to the heart of Iowa’s reactionary legislature, this one on prohibiting state law enforcement officers from cooperating with federal officials on some gun control matters.

In Iowa, no GOP leader questioned why former legislator and longtime conservative activist Dave Millage had to resign as Scott County Republican chair because he said Trump should be impeached over his "atrocious conduct" inciting the January 6 insurrection.

Representative Liz Cheney had to fight to retain her leadership position in the House GOP Conference and was censured by Wyoming Republicans for her failure to abide by the new first commandment. In holding Trump accountable for his role in the mayhem at the Capitol, she showed devotion to principles other than paying homage to Trump.

Given the GOP corruption of the Ten Commandments, one fears what is in store for us when they get to the New Testament’s Sermon on the Mount and all those blessings upon the hungry, the merciful, the meek, the pure in heart and the peacemakers.