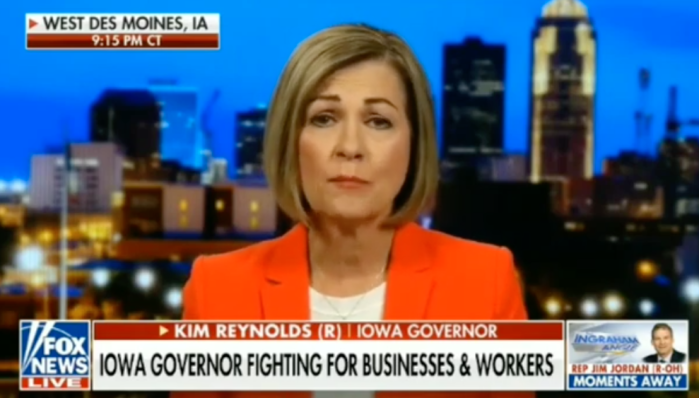 It is my understanding that you have decided to discontinue additional federal unemployment payments to Iowans who lost their jobs due to the COVID-19 pandemic because you want people to get back to work. As one of those Iowans, I’m writing to you because I would very much like to go back to work, but I’m having some difficulty figuring out how I might do so.

I have a child who suffers from significant mental illness. As I know both mental health services and child care are interests of yours, I thought perhaps you might have some advice.

Five days after I was laid off from my job, my then eight-year-old son was transported to the ER by the police and then admitted to the children’s psychiatric ward for a ten-day stay. Upon his discharge, there were no follow up plans for his care other than the same (now remote) visits he had had with his psychiatrist and therapist. His psychiatrist found a partial day treatment program for children which met for 2.5 hours a day and was a 40 minute drive from our house.

I applied and was placed on the waitlist. We got a spot in the program shortly after the derecho. Less than half an hour into the day the second day, as I was driving aimlessly around Cedar Rapids—between the pandemic and the storm, there was nowhere to go to spend the hours my son was at partial day treatment, I got a call that my son had tried to escape and they didn’t know what to do. So that was that for that program.

I was in many ways lucky. With the help of our school’s student-family advocate, I applied and was approved for Medicaid for both of us, which meant that we were finally able to get services including BHIS (behavioral home intervention services), which I’d tried to get years ago but had not been eligible to receive, even if I was willing to pay $180/hour out of pocket, and a care coordinator (variously called a PIH or an IHH or something else depending on the agency you use).

Unfortunately, most of those services have waiting lists, too, and by the time we got a spot, my son had already spent another week in the hospital.

His school has bent over backward to provide accommodations and to help in any way they can, and I have nothing but good things to say about the staff there, particularly our principal and all the special education staff.

But services are one thing: a child willing to cooperate with those services is another. A psychiatrist can prescribe every medication under the sun, but none of them help if you don’t take them. It takes me an hour to an hour a half per day to get my son to swallow one pill. My son is prescribed six pills per day. I could easily spend a full workday just getting him to take medication.

Similarly, his therapist and BHIS provider can go above and beyond to attempt to engage him in therapy, but no one can keep him from hanging up on the Zoom call or refusing to engage with the provider who comes to our house.

His school can offer every IEP intervention and accommodation known to special education, plus a few new ones, but they cannot make him go to school, either in person or online. And neither, I am afraid, can I—he’s much too heavy for me to carry, and he does not respond to threats or bribes (neither of which is a terribly effective method of getting people to do anything, or so I have gathered from both the psychology classes I have taken and from life experience).

Getting a job outside the house would thus require reliable child care, which costs $15/hour in the area where I live. Taking a job that pays less than that is not an effective money-management strategy, and getting a professional job of the sort I used to have would be difficult, given the number of appointments my son has each week. Although of course, with the kind of pay I once had, we would lose Medicaid and thus lose at least half those appointments. And any job I got would require an employer flexible enough to allow me the time to get my son to all those appointments, regardless of their location.

Working remotely sounds like a better solution, but many remote jobs require that you be able to work from a space in your house that is free from interruption. I do not have such a space in my house. While I might be able to create one, using it would again require child care, as someone would need to be on hand to answer to the needs and demands of a child who is not very self-sufficient.

There are remote jobs that can be done on one’s own schedule, but I have found it difficult to concentrate on content writing or call evaluation while dealing with near-constant interruptions. I suppose the answer is that I should get up at 3 am each day to work and let my child sleep in as late as possible—a tempting idea at times, but not one that would get me enough sleep or be good for him.

So given that my child will not go to school, will not take medication for ADHD or anxiety, will not attend therapy or other intervention services to learn skills to deal with his difficulties, and will thus not stop taking his anger and anxiety and frustration and fear out on me—and that half the services he receives are dependent on my earning less than $23,000 a year—I am wondering what kind of job you would suggest I might pursue, or that other Iowans in my place might? For I am hardly the only one facing the circumstances I do: the difference mainly is that I am much luckier than most. I have savings; I have very little debt; and I have family who would likely help me out.

But many Iowans are not so lucky. I am sure that, absent the money they might now be receiving from additional pandemic unemployment funds and the gutting of the Iowa Workforce Development system over the past decade, they, too, would appreciate your help.

Laura Crossett is an Iowa native who worked for fifteen years as a public librarian. Her writing has appeared in the Des Moines Register, The Iowa Review, and a variety of other publications. Currently she lives in her hometown of Iowa City. Find her online at newrambler.net.

Top image: Screenshot from Governor Kim Reynolds' interview on Fox News on May 11, the day she announced she was ending Iowa's participation in federal pandemic-related unemployment programs.