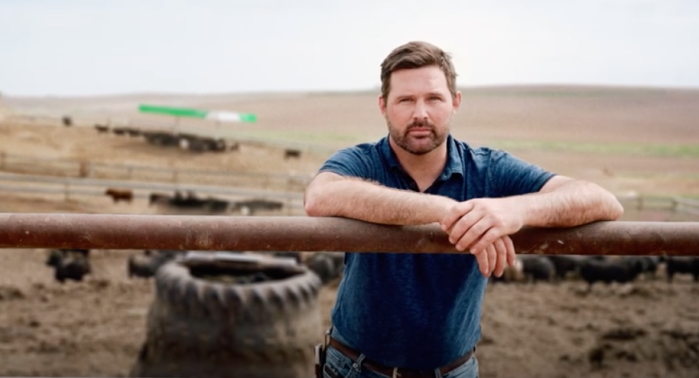 Most Iowans thinking about running for U.S. Senate in 2022 are waiting for Senator Chuck Grassley to tip his hand, probably sometime this fall. But fifth-generation farmer and former Crawford County Supervisor Dave Muhlbauer launched his candidacy on May 24 by leaning into his rural roots.

Muhlbauer's introductory video is among the best I've seen in recent years.

The candidate speaks in his own voice throughout, as viewers see a montage of images from Muhlbauer's farm and other rural or small town scenes. My partial transcript:

Iowa is my home. The farmland's in my blood. I'm a fifth-generation farmer. [...]

It's who me and my family are, and that drives me to want to make Iowa the best it can be for everybody. [...]

A lot of farmers that are [in their] 50s, 60s, they come up to me, "Dave, I used to be a Democrat." And they just feel that the Democrats are leaving the rural areas high and dry.

I think people are just fed up, they’re stretched thin. Wages aren’t making what they should be. The cost of living is going up. To see these corporations only continue to stack things in their favor through policy, procedure, and lobbying, to see CEOs make a thousand times more than general labor, it’s highway robbery.

People in Iowa are progressive. They are critical thinkers, they look to the future. They forget who the rural Democrats truly are. We're looking out for the little guy. We know that there needs to be a safety net for people to get back on their feet.

Iowa has been my home all my life. I've never gone anywhere. This is where I live, where I grew up, where I’m raising my family. Having that, just, grassroots connection to Iowa and its soil is who I am. It’s why I’m running for Senate.

Grassley would be a prohibitive favorite if he seeks another term. And recent voting trends in Iowa suggest Republicans would be favored to win the 2022 Senate race even if the seat is open. Muhlbauer confronts that reality in the video: "I'm not gonna kid myself, it's gonna be a battle. But we have an possibility to put Iowa as a leader, especially through farming and education and infrastructure and health care. To me, it's now or never."

Then he mentions another reason he's not waiting. His father, former county supervisor and State Representative Dan Muhlbauer, passed away last October without having finished a lot of what he had planned. Dave Muhlbauer closed out the video with this:

You can't just sit around and hope for somebody else to do something for you to make your life better.

Muhlbauer probably won't be the only candidate on the 2022 Democratic primary ballot. Others considering the race include retired Admiral Mike Franken, who finished second in the 2020 primary, State Auditor Rob Sand, and U.S. Representative Cindy Axne. But they may not confirm their plans for months. And if Grassley seeks an eighth term, which I have come around to believing is likely, Sand and Axne will probably either run for governor or for re-election to their current offices.

For the time being, Muhlbauer has the field to himself. And there is absolutely no downside to a Democrat pounding the pavement, communicating his values to Iowans in communities of all sizes. Speaking to Douglas Burns of the Carroll Times Herald, the candidate said,

“It’s getting out there face to face. I am a western Iowa farmer. What I offer as an option is somebody who is living and walking what Iowans are all about. I’m living every day with blood, sweat and tears.” [...]

“My issue is I think we really have got to start having in-depth conversations about farming,” Muhlbauer said. [...]

He said agriculture is becoming too consolidated with, for example, large swaths of the meat market controlled by a few large companies.

“We gotta look at breaking these companies up or at least trying to have fair, transparent markets,” Muhlbauer said.

In addition, Muhlbauer is living proof that Democrats who speak to real problems facing Iowans can win over voters who don't support most of the party's other candidates.

MUHLBAUER OUTPERFORMED OTHER DEMOCRATS ON 2020 TICKET

The 2020 election results from Crawford County were a wipeout for Democrats at the top of the ticket. Joe Biden managed just 2,220 votes (31.2 percent) among county residents, while Donald Trump received 4,854 votes (67.7 percent).

Congressional candidate J.D. Scholten did even better, winning 2,412 votes (36.3 percent) to 4,215 votes (63.4 percent) for Randy Feenstra, who was campaigning as a generic Republican.

Granted, Muhlbauer had the advantages of incumbency and a well-known family name, thanks to his father's and grandfather's many years of public service. Also, the supervisor election was not a binary choice between a Democrat and a Republican. Rather, voters could choose two of the three candidates running for the two seats.

Nevertheless, the county race result shows voters who don't generally lean toward Democrats may give someone a chance who listens and acknowledges their concerns. As Muhlbauer says in his announcement video, "Being a county supervisor, you don't have to be a rocket scientist. I mean, you treat people fairly, you respect them. Someone might have a different opinion than you do. We're all in this together."