Johnson County's five supervisors voted unanimously on June 24 "to recognize Lulu Merle Johnson as the official eponym" of Iowa's fourth-largest county. The previous namesake was Richard Mentor Johnson, who had no ties to the area but was U.S. vice president when the county was established in 1837.

Johnson County Supervisor Rod Sullivan had floated the idea of choosing a different namesake four years ago, noting that Richard Mentor Johnson was a slave-owner who "killed Native Americans indiscriminately." The idea picked up steam in the summer of 2020 after Ron McMullen published a guest column in the Iowa City Press-Citizen about the "particularly despicable" man for whom the county is named.

Supervisors formed a committee to consider different people with the surname Johnson, who would be more suitably honored. They settled on Lulu Merle Johnson, who was born and raised in southwest Iowa and enrolled at the University of Iowa in 1925, when few African Americans were students there. She received bachelor's, master's, and doctoral degrees from the university, serving on the faculty for ten years while working on her doctorate in history. In 1941, she became the first Black woman to receive a Ph.D. from the University of Iowa. She was also the second Black woman in the country to earn a Ph.D. in history.

As a scholar, Johnson produced important work on slavery in northern states. She spent most of her career at historically Black colleges and universities, after racist hiring practices prevented her from teaching in Iowa.

Royceann Porter, the first Black woman to serve on the Johnson County supervisors, made the motion to change the county's namesake during the June 24 meeting. Sullivan seconded.

Lulu Merle Johnson was born in 1907 in Gravity, Iowa, to a father who was born into slavery. She became a student at the State University of Iowa (University of Iowa) in 1925 at a time when she was one of only 14 African-American women enrolled at the university. She earned both a bachelor’s and master’s degree by 1930, despite facing open discrimination because of her race and gender.

From 1931 to 1941, Lulu Merle Johnson was a professor at the State University of Iowa while working toward her Ph.D. In 1941, she became the first African-American woman to earn a Ph.D. from the University. From 1931 until her retirement in 1971, she maintained an active career as a professor and academic. She taught history at Historically Black Colleges and Universities and was the Dean of Women at Cheyney State University (Cheyney University) in Cheyney, Pennsylvania.

“Today was touching and I am so happy,” Royceann Porter, Board of Supervisors Vice- Chairperson, said. “It was amazing to include Lulu Merle Johnson’s family in the recognition. I look forward to taking students to Gravity for the annual civil rights trip so they can learn more about her legacy.”

“We recognize that place names embody the identity and cultural values of a place. For that reason, it is important to establish an eponym of Johnson County who represents what is important to the people who live here,” Lisa Green-Douglass, Board of Supervisors member, said. “It has been a privilege to chair the Johnson County Eponym Committee, and to be able to recognize, honor, and establish Dr. Lulu Merle Johnson as the County’s official eponym.” 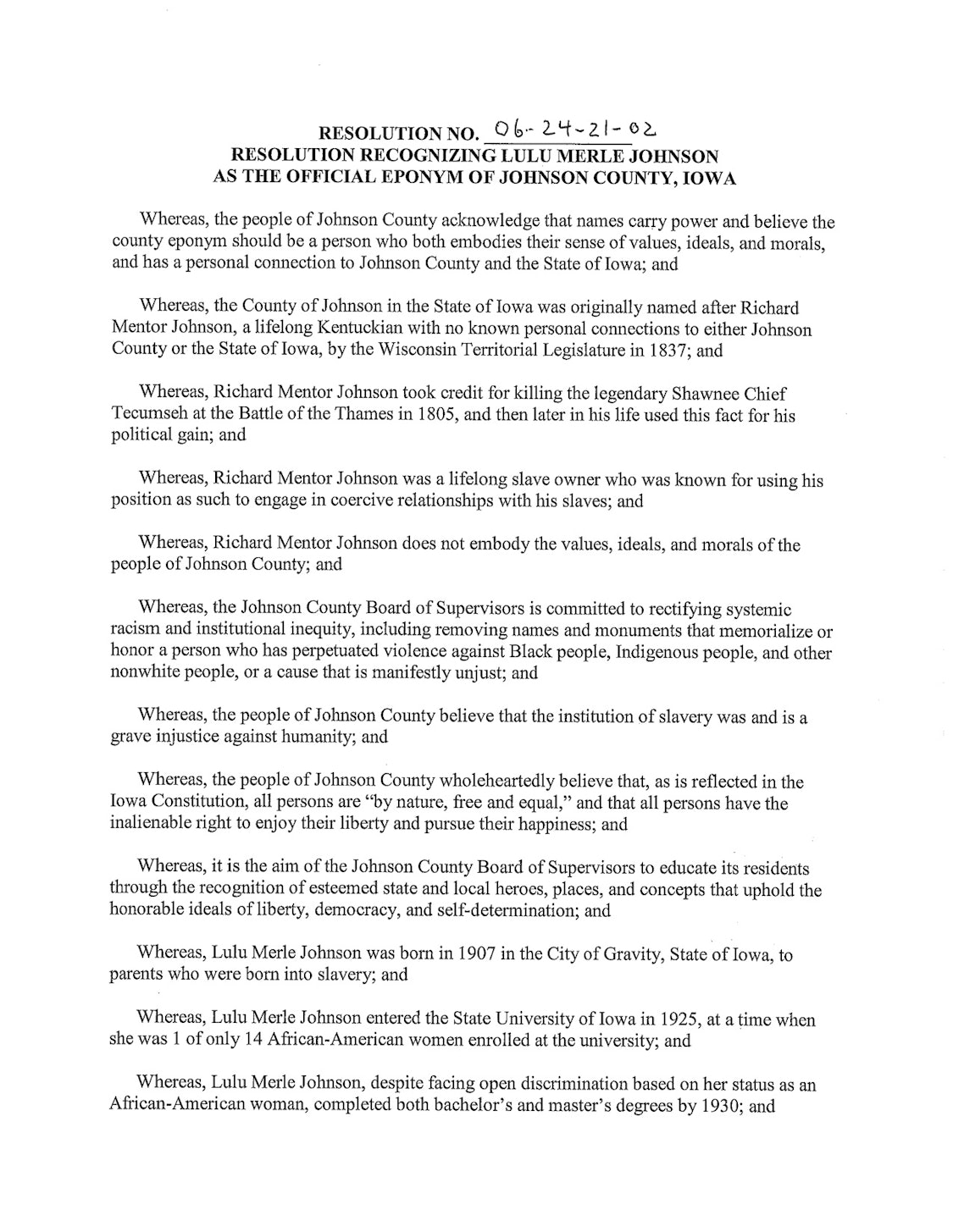 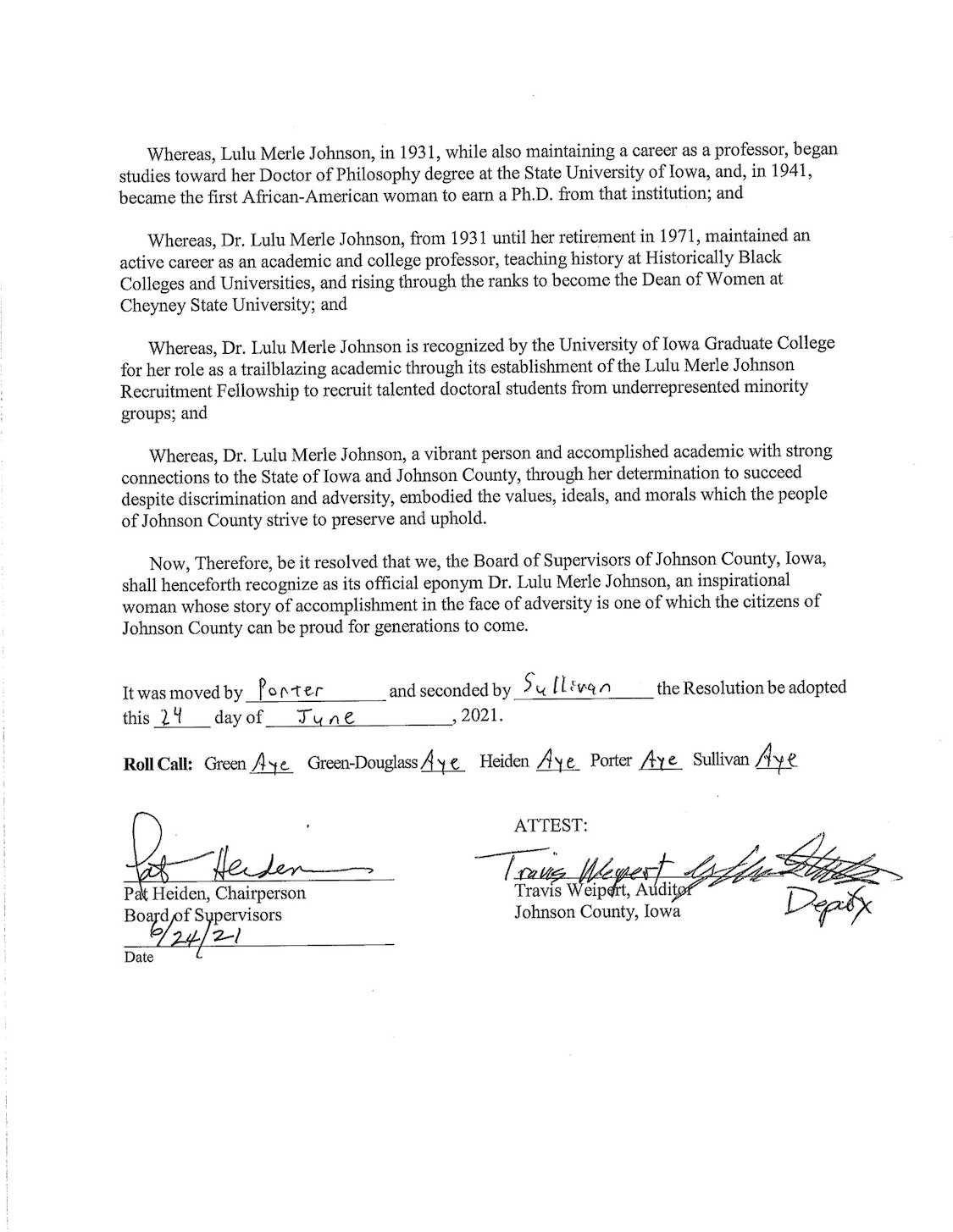