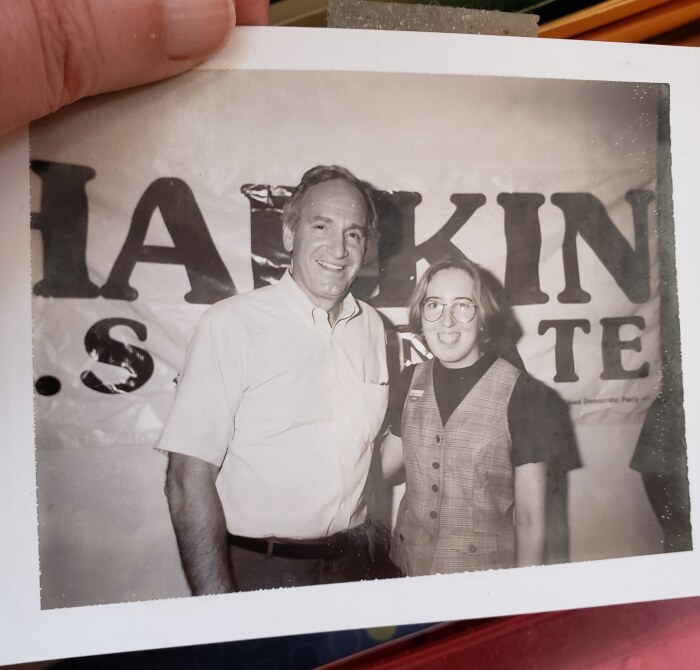 A new path for Iowa Democrats

The first time I got into a cab in DC, the driver asked me where I was from. When I said Iowa, he turned around and told me Senator Tom Harkin had ridden in this very same cab, and how lucky we were to send a very good man like that to Washington.

Since then, we’ve lost Congressional seats and state legislative chambers, watched Iowa Supreme Court justices thrown out for an unanimous ruling on marriage equality, and lost the governorship again and again.

My, how far we’ve come, Iowa Democrats. And not on a good path either. What can we do to turn this around? I’d be foolish to say this can all change in a cycle or two. The New Iowa Project is a fantastic start. It’s amazing to see activists fired up and ready to work year round to have the deep conversations needed to change hearts, minds, and votes.

Here are some things I’d like to see us focus on as well. It's not exactly rocket science.

This past year has shown us that local elected positions are now more critical than ever in areas of public health, public safety, education, and more. We must do more to recruit and support our people to run. Potholes may not be partisan, but your politics will tell me your priorities. Let’s not forget local boards and commissions. Poll workers are sorely needed as well.

Invest in our youth

I got involved in politics as a college Democrat and later joined the 21st Century Forum, a group of young professional Democrats in the Des Moines metro area. Sadly, a lot of my pathway to activism doesn’t exist any more.

We need a stable infrastructure to help out high school and college groups. Students will graduate and move on. It would be fantastic to have a steady, reliable source they could depend on for help in organizing.

Invest in our people

Can we ever have enough training? Nope. From fundraising, message building, letter writing, candidate training to technology, there is a never-ending series of topics to present.

We should make an effort to hire local. We should be hiring young people who grew up in Iowa and have a desire to make their communities better. We need to look beyond those who are getting the Iowa stamp on their resume.

We also need to try to retain people who work here. It’s frustrating for an activist to have to rebuild a connection with a staffer. There is hardly any institutional collective memory anymore.

Instead of relying on volunteer labor, we should also pay people to run a staging location or GOTV phone bank. In times past, financial constraints prevented me from quitting my job (or jobs) to take a temporary campaign job. I didn’t have paid time off to spend a day or two, or a week, to run a phone bank. If I did, I’d have to budget for it and work extra later to make up for it. And I didn’t even have to worry about child care, just getting home to make sure my kitty got his insulin shot on time.

Wouldn't it be great if you walked into a Casey's and heard on the radio what great things we were planning to do? Or opened any newspaper to see us represented on the editorial page? Or knew Democrats had a great rapid-response system to combat the inevitable lies being spewed out there?

I want to hear more from my party or candidate other than just another fundraising email. I want to hand someone at the Iowa State Fair a flyer explaining how the infrastructure bill will help this state.

I want to hear stories from Iowans. I want to hear how policies have affected their lives for better or for worse. It is through those personal stories that we put a human face on issues. Suddenly it’s not a number, it’s someone who is struggling navigating the failed privatized Medicaid system to find quality health care for their disabled child. We need to stand up and say what we are and who we are fighting for and put an end to the myth of the "left" that is going to destroy everything you hold dear.

After years of watching who has won and lost in this state, it's clear Democrats need to start having conversations and invest more time in talking to voters. We will never win the television ad war. I can’t think of a single person whose mind was changed on a candidate by a 30-second ad, but I’ve talked to a lot of folks that are turned off by them and decide to stay home.

This list is just a start. It’s not up to one person or entity to implement it. All of us, starting from the grassroots and moving up the ladder, need to dig a little deeper and give a little more to ensure a better future for us all.

To our candidates: I want to see you out in this state. I want you to go to the county fairs and small town festivals. Take the time to eat lunch at the cafes and show me what you’re eating. Walk around the square instead of just driving through. If people don’t know you, they won’t trust you or vote for you. Show me the night sky after a long day on the trail and the sun rising on a new day for Iowa.

We deserve a governor who makes decisions with empathy and compassion. We deserve elected officials who make decisions based on logic and facts. I’m more than ready for that day to return, and I am willing to fight for it. Are you?

Top photo of Senator Tom Harkin with Lori Hunt in 1996 provided by the author and published with permission.