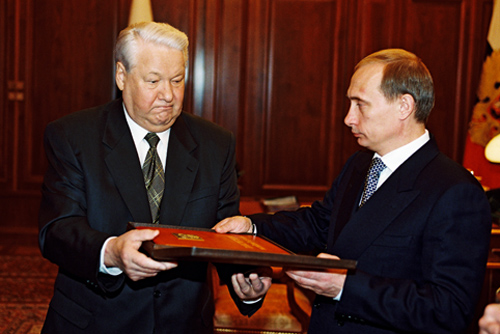 Celebrating democracy in an age of backsliding

“What would you say if you saw it in another country?”

Dartmouth political science professor Brendan Nyhan used that catch phrase throughout Donald Trump’s presidency (up to its very last day) to highlight the president’s public comments or official acts that in any other country would be seen as warning signs of a slide toward authoritarian rule.

The thought experiment always resonated with me, because I saw it in another country.

During the summer of 1996, I spent six weeks in Moscow covering the Russian presidential election. Boris Yeltsin had won the presidency by a landslide in 1991, but his approval ratings cratered during his first term, due to economic hardships, corruption, and an unpopular war in Chechnya.

Eleven presidential candidates qualified for the ballot. Paradoxically, Communist candidate Gennadii Zyuganov was widely considered the only challenger with enough support to pose a serious threat to the incumbent, as well as the rival Yeltsin was best positioned to beat, through a relentless negative campaign highlighting the horrors of Soviet rule.

In the months leading up to the 1996 election, Yeltsin tried to address his baggage in many ways: declaring a ceasefire in Chechnya, firing the hated defense minister, promising to end conscription and pay wages and pensions on time. The president’s team wanted Yeltsin to finish ahead of Zyuganov in the first round on June 16, which he did–barely.

As the July 3 runoff election approached, there was no consensus among analysts of Russian politics on whether the incumbent could win a fair race, or whether Yeltsin would give up power if he finished behind Zyuganov.

Speculation about the possible scenarios spawned jokes about officials rigging the count, or Yeltsin refusing to honor the will of the voters. Here’s one I heard that summer:

Boris Yeltsin, speaking to voters at a campaign rally: “Elect me and you’ll get a brand new president.”

Voice from the crowd: “What if we don’t elect you, Boris Nikolaevich?”

Yeltsin: “Then you’ll get the same old president.”

Yeltsin beat Zyuganov by double digits, according to the official count, averting a constitutional crisis. But the election fell short of what we would consider free and fair, and the result fueled more democratic backsliding in subsequent election cycles.

Most Russian journalists, even those who had harshly criticized Yeltsin’s policies, openly supported the president’s re-election, fearing a Communist return to power and Soviet-style censorship. Private as well as state-owned media also gave a boost to a lesser-known candidate, Aleksandr Lebed, who was perceived to have potential to draw votes from Zyuganov (and keep the Communist from finishing ahead of Yeltsin in the first round). The charismatic Lebed then helped Yeltsin win the runoff by endorsing him and agreeing to join his government.

The perceived influence of the media in securing Yeltsin’s victory led to a wave of media acquisitions by billionaires and large corporations after the 1996 election. The state’s leverage over media owners and shareholders paved the way for the government to reassert control over private news outlets during Yeltsin’s second term and especially after Vladimir Putin came to power in 2000.

Meanwhile, Russian elections became less competitive. No presidential race since 1996 has been close enough to go to a runoff. The last parliamentary elections where the outcome was in serious doubt before Russians voted occurred in December 1999. Having installed the little-known Putin as prime minister, Yeltsin resigned before the end of his term to give his chosen successor the ability to campaign as the acting president.

I closely followed those developments while covering Russian domestic politics for Radio Free Europe/Radio Liberty and writing a doctoral dissertation about the Russian media. The whole time, I felt grateful to have grown up in a country where I didn’t have to worry about the president and his allies subverting an election outcome.

That’s not to say I was an optimist about American politics. As a teenager, I saw Walter Mondale lose to Ronald Reagan in 49 states, then watched Michael Dukakis lose badly to George H.W. Bush after leading in the polls over the summer. I remember wondering whether Democrats would win another presidential election in my lifetime.

But it never crossed my mind that a losing candidate might refuse to concede an election here.

The Bush v. Gore ruling shook my faith. I had naively expected the conservative Supreme Court justices to follow their expressed views on states’ rights. Seeing Republican-appointed justices reverse the Florida Supreme Court’s decision on a statewide recount in order to hand the presidency to a Republican forever changed my view of how the courts might respond to partisan efforts to manipulate elections.

But even after 2000, I couldn’t conceive of one party preventing the clear winner of a U.S. presidential election from taking office.

That scenario is not far-fetched anymore.

Republicans didn’t hold Trump accountable for trying to pressure a foreign leader to undermine Joe Biden. Few objected publicly when Trump hedged on whether he would leave the White House if he lost the election.

By September 2020, when Trump hailed the use of police force against journalists and protesters and again refused to commit to giving up power if he lost to Biden, the political scientist Nyhan was declaring “a democratic emergency.” He told MSNBC’s “Morning Joe” that millions of Americans might need to come into the streets if the November election result was undermined.

And I can’t believe I’m saying that, as a scholar of American politics. I never thought I would be saying those words about the country that I study. We’ve had the peaceful transfer of power in a democracy for longer than any other country on Earth. And it’s now being called into question. These are very serious times.

Republicans said little when Trump called Georgia election officials in January, demanding that they “find” enough votes to declare him the winner in that state.

Biden carried Pennsylvania by 81,660 votes and Arizona by 10,457 votes. Yet 147 Republicans in the U.S. House or Senate voted against certifying one or both states’ electoral counts, after Trump and conservative media spent months amplifying baseless claims about fraud.

Iowa’s Republicans in Congress all voted to certify Biden’s electoral college win–in large part because they didn’t want to undermine Mariannette Miller-Meeks’ claim to a six-vote victory in the second Congressional district.

But none of this state’s elected Republicans denounced Trump for lying about fraud or refusing to concede his election loss. On the contrary: every Iowa Republican in the U.S. House or Senate implied or stated directly that “mismanagement,” “irregularities,” or “illegal votes” tainted the results in some states Biden carried. Governor Kim Reynolds also tacitly promoted the Big Lie and lamented that Iowa didn’t join a Texas lawsuit seeking to throw out tens of millions of votes in four states that didn’t re-elect Trump. Miller-Meeks tells friendly audiences she won her 2020 race by more than six votes, but “Six is what they cheated me down to.”

Now GOP-controlled legislatures in fourteen states (soon to be joined by Texas) have passed laws that will make it harder for many Americans to vote and easier for Republican lawmakers or judges to toss out election results, if their favored candidates lose. State and local election workers are facing a “dramatic increase in menacing and violent threats,” according to the U.S. Department of Justice. Against this backdrop of “the greatest assault on voting rights since the end of Reconstruction,” the Supreme Court just made it harder to challenge new restrictions under the Voting Rights Act.

It’s beyond anything I could have imagined happening in my home country as a young writer covering my first Russian election cycle 25 years ago.

I have no confidence a GOP-controlled House or Senate would certify a Democrat as the winner of the next presidential election, even if the 2024 nominee won more convincingly than Biden did last year. Like Nyhan, I never thought I would have to worry about the U.S. retreating from fair elections. And on a holiday that commemorates the adoption of the Declaration of Independence, I see little to celebrate about the current state of American democracy.

Top image: Russian President Boris Yeltsin hands over a copy of the Russian constitution to Prime Minister Vladimir Putin on December 31, 1999, the day Yeltsin resigned and made Putin acting president. Official Kremlin photo available via Wikimedia Commons. Although Laura Belin didn’t realize it at the time, that day was the beginning of the end of her career covering Russian politics.