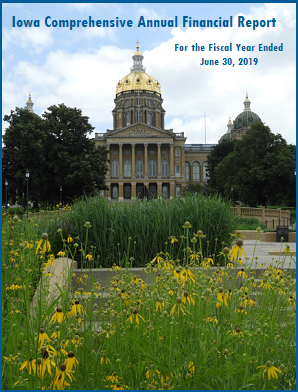 Iowa still has not finalized its Comprehensive Annual Financial Report for the fiscal year that ended on June 30, 2020. That report is typically published by the end of December, but Iowa State University was more than six months late in providing its year-end financial data to the Iowa Department of Administrative Services, which compiles the annual reports.

ISU's problems with extracting financial data coincided with the university's switch to the Workday computer system for accounting, which happened on July 1, 2019--the beginning of the 2020 fiscal year. Although many people spent months trying to submit ISU's fiscal year 2020 data to the state, the university submitted “incomplete and very draft financial statements" in February 2021, more than four months after the normal time frame for state government entities to send complete, auditable data to the Department of Administrative Services.

In late April, a "preliminary" version of the state's annual report, featuring a disclaimer that the numbers had not been audited, was posted to the Electronic Municipal Market Access (EMMA) website, which is the leading resource for information on municipal bonds. At that time, the State Auditor’s public information officer Sonya Heitshusen said auditors were trying to verify the numbers in time for the state to issue a final report by June 30.

Heitshusen confirmed in a July 6 email that the annual report "is not yet ready for release," adding, "We anticipate it will be complete in two to three weeks."

ISU's spokesperson didn't respond to an inquiry about whether state auditors have asked the university to resubmit or revise some of the year-end financials for fiscal year 2020. Without commenting on the current review in progress, Heitshusen noted, "It is not unusual for auditors with the Auditor of State Office to ask further questions of any entity should issues arise with the reported numbers."

Although the delayed publication of Iowa's annual financial report is unlikely to affect the state's credit rating, or that of ISU, it could foreshadow larger accounting problems in the next few years. The Iowa Department of Transportation just switched over to using the Workday computer system for finances on July 1. The rest of state government is supposed to start using the company’s financial software during the summer of 2022. Iowa lawmakers approved two special appropriations this year to pay off the remainder of contracts state officials signed with Workday in 2019 and 2020.