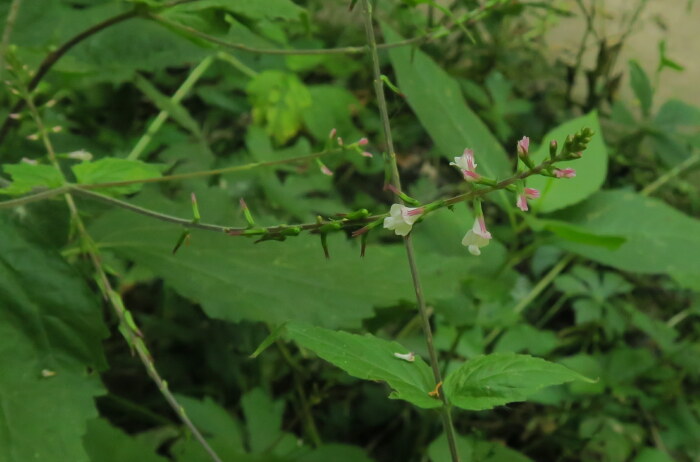 A plant I'd never noticed before showed up on my doorstep (literally) this summer. Once flowers began to appear in late June, I posted a few pictures in the Iowa wildflower enthusiasts Facebook group I created last year. A member of that community quickly identified the mystery plant as American lopseed (Phryma leptostachya).

As the name suggests, American lopseed is native to most of North America east of the Rocky Mountains. These plants can also be found in California. The Illinois Wildflowers website notes that this species (sometimes known simply as lopseed) "prefers a sheltered location that provides light to medium shade, moist to mesic conditions, and a rich woodland soil with abundant organic matter."

How did these wildflowers suddenly turn up in an area I have watched closely for 20 years? According to ecological consultant Leland Searles, birds may have carried the seed to my yard, or animals may have tracked it in on their hooves or paws.

American lopseed leaves are toothed and much broader near the bottom of the plant than near the top. 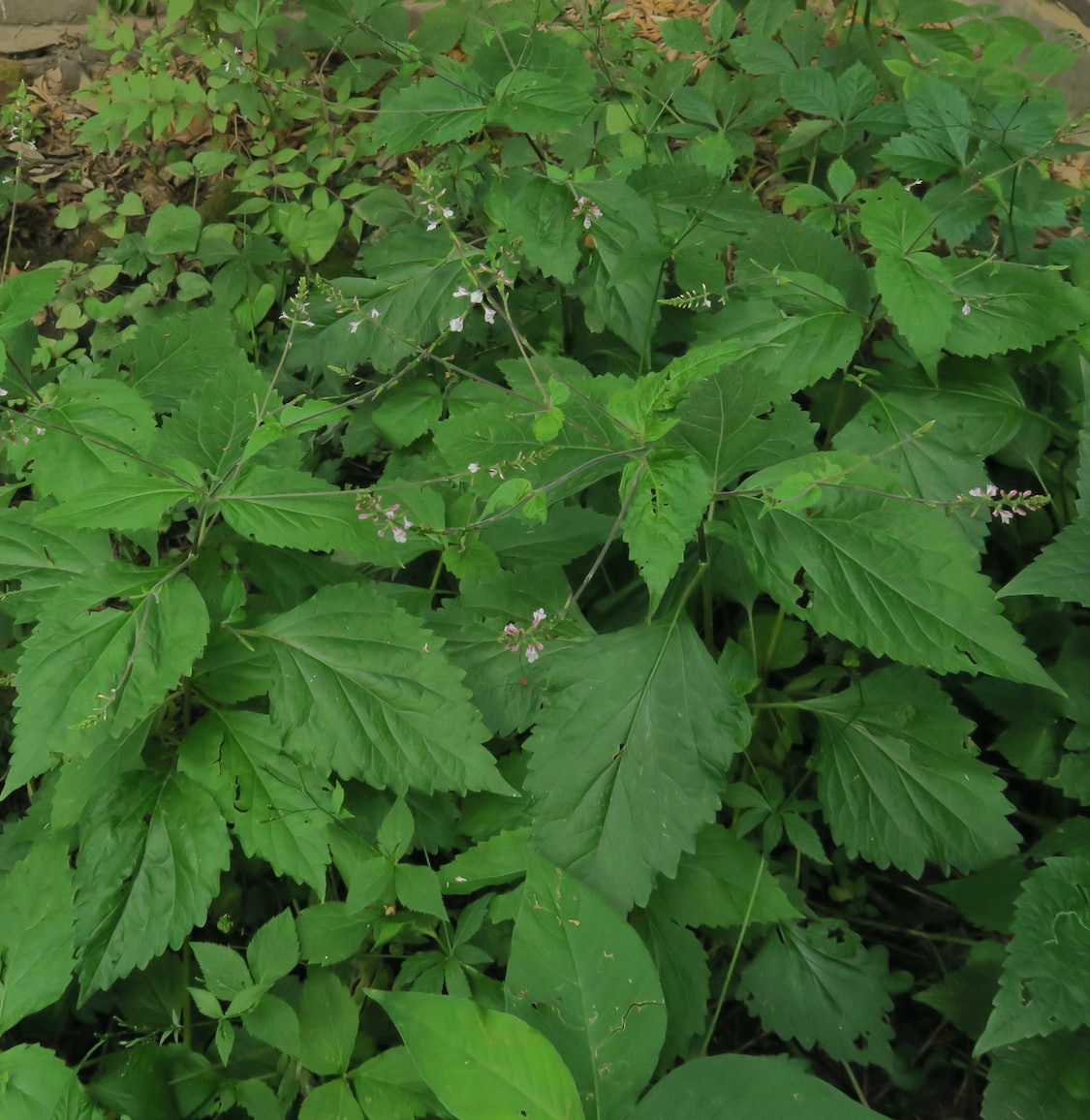 American lopseed flowers are not "showy." Minnesota Wildflowers describes them this way:

Individual flowers are about ¼ long and wide, tubular, with 1 short notched top lobe that turns up and 3 longer bottom lobes that extend out. The top lobe is pink-tinged with a dark pink streak along the top outside, the bottom lobes are pale pink to white. There are 4 yellow-tipped stamens inside the tube.

The pink is visible on these buds, which are about to open. 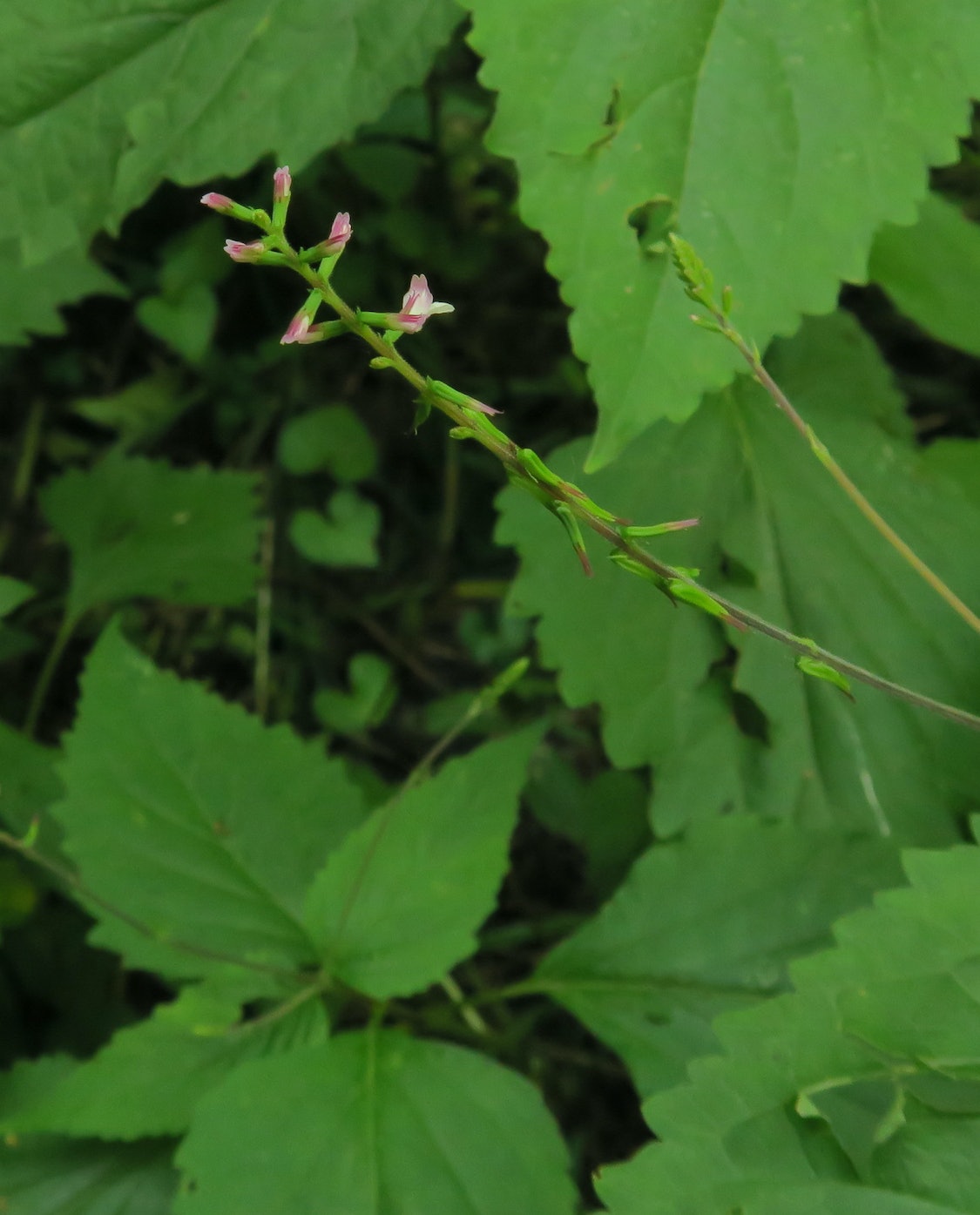 I couldn't capture the stamens, but you can see the lobes in the next two pictures. 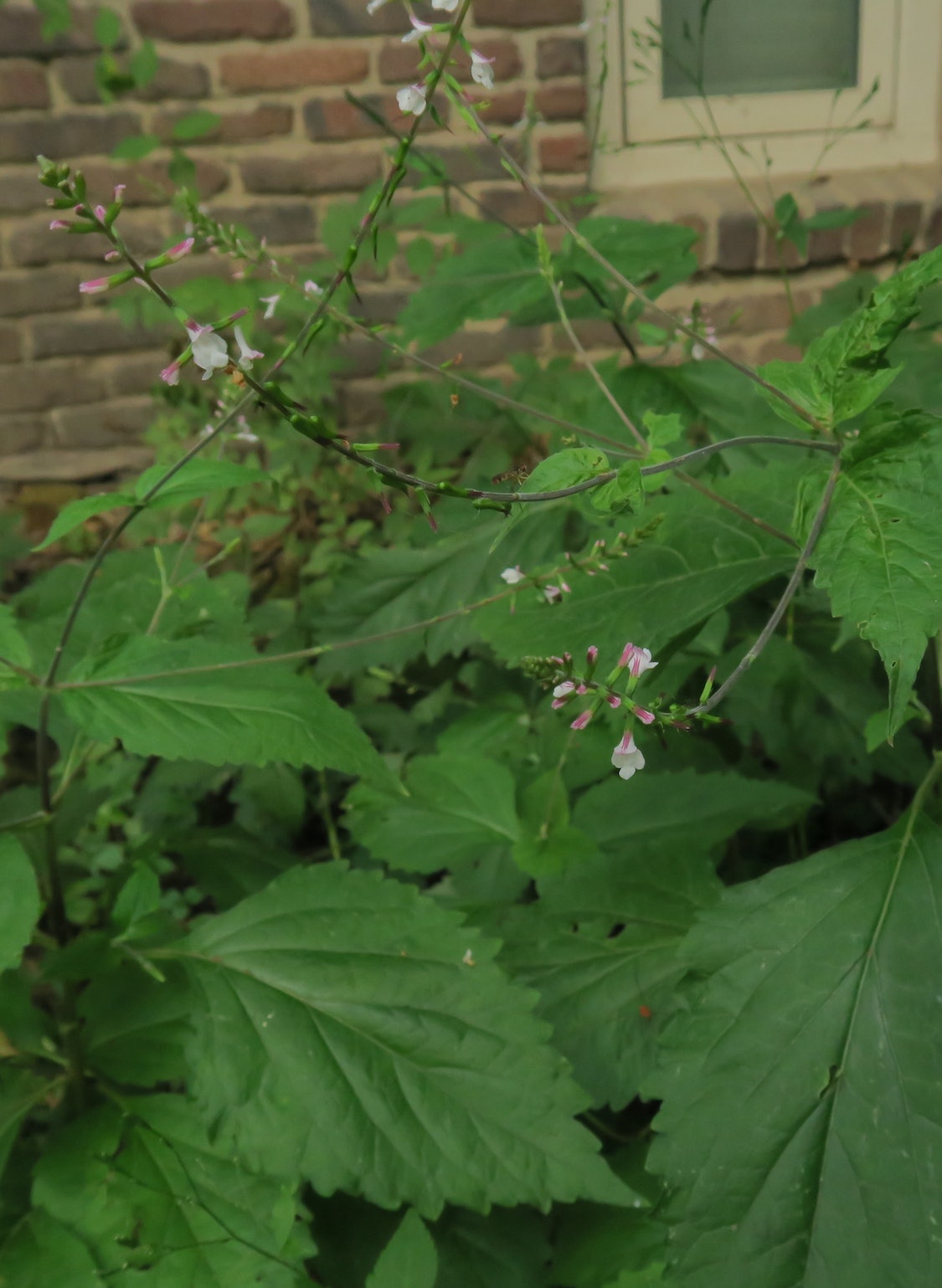 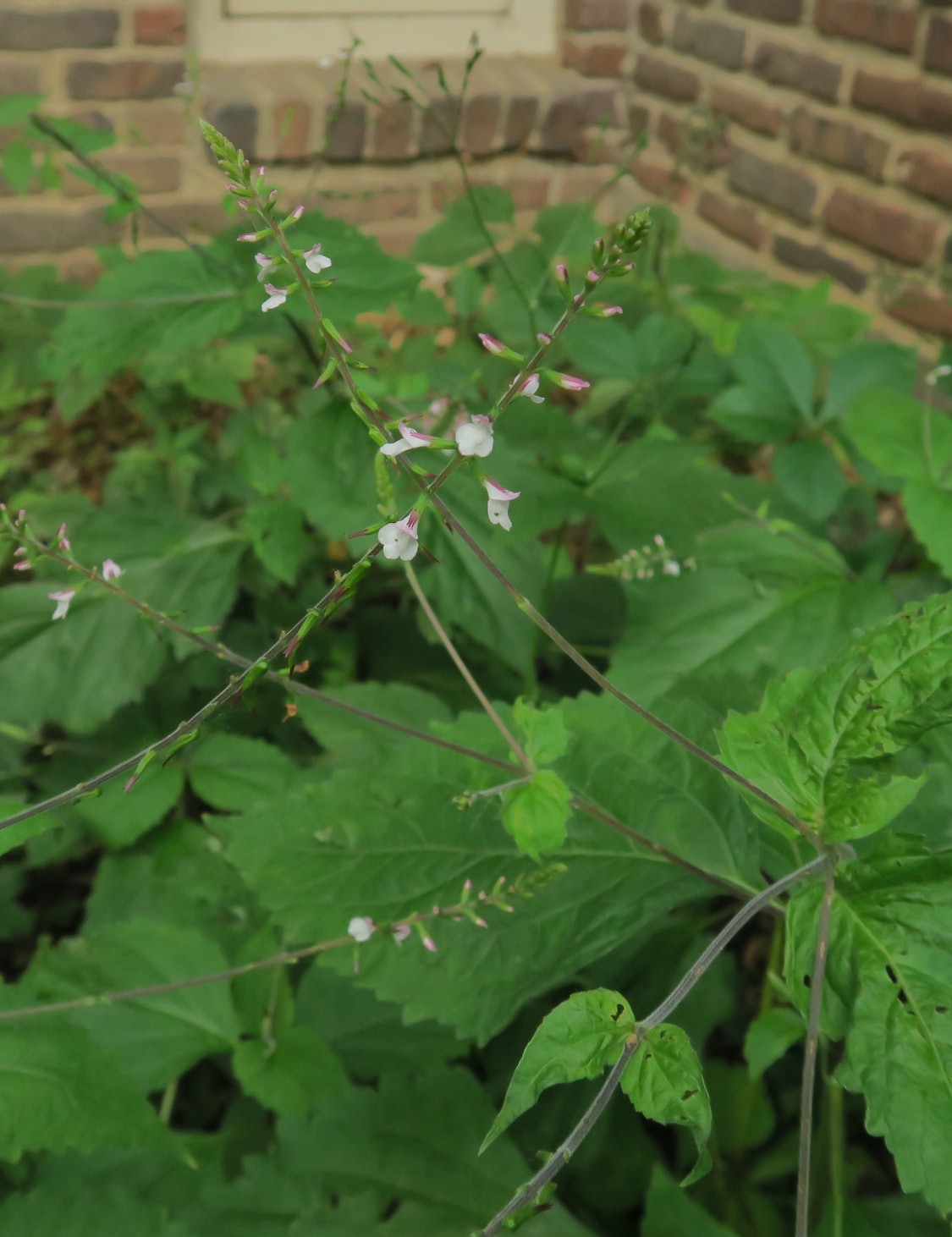 "Only a few flowers are in bloom at the same time," notes Illinois Wildflowers. 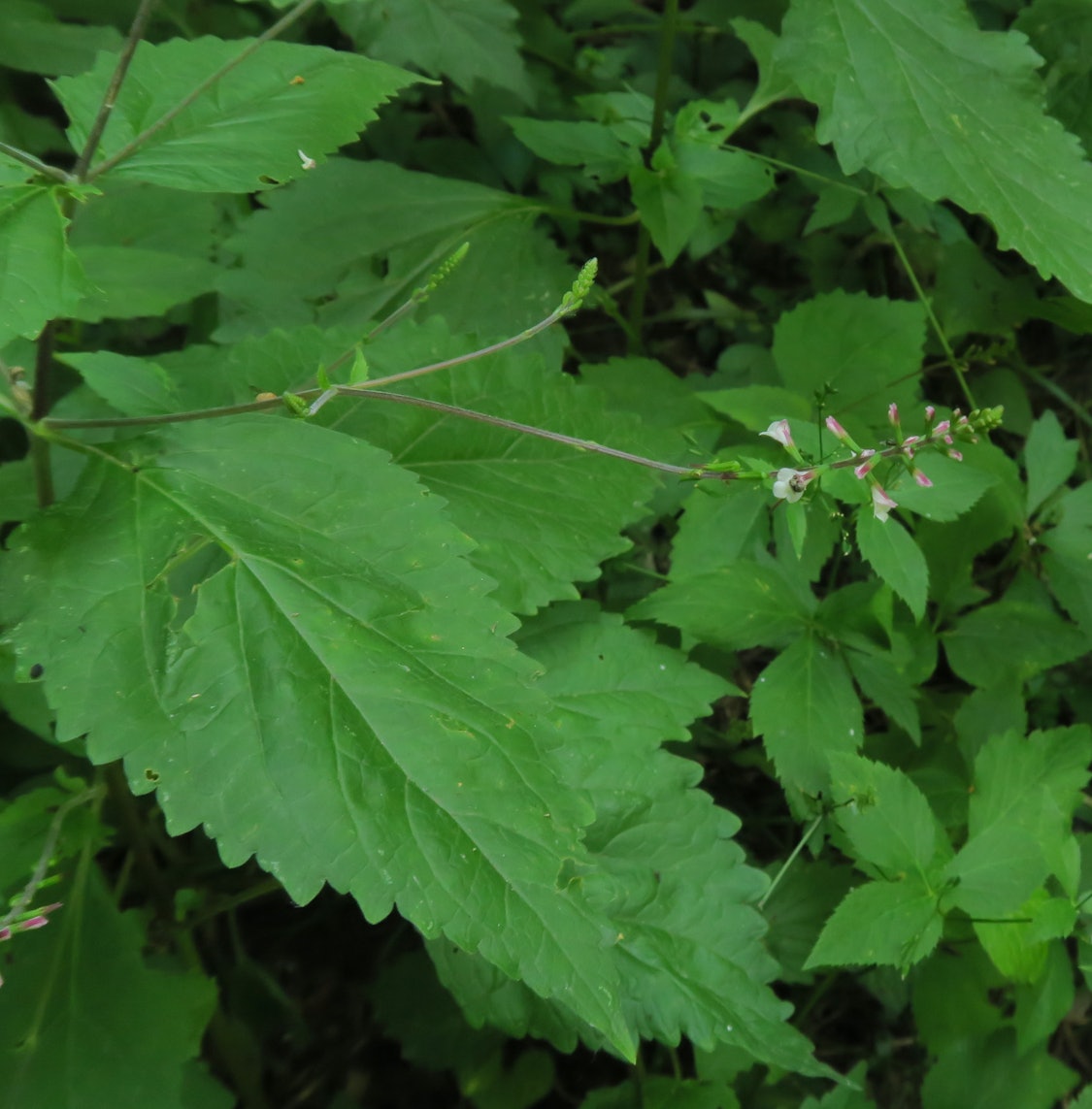 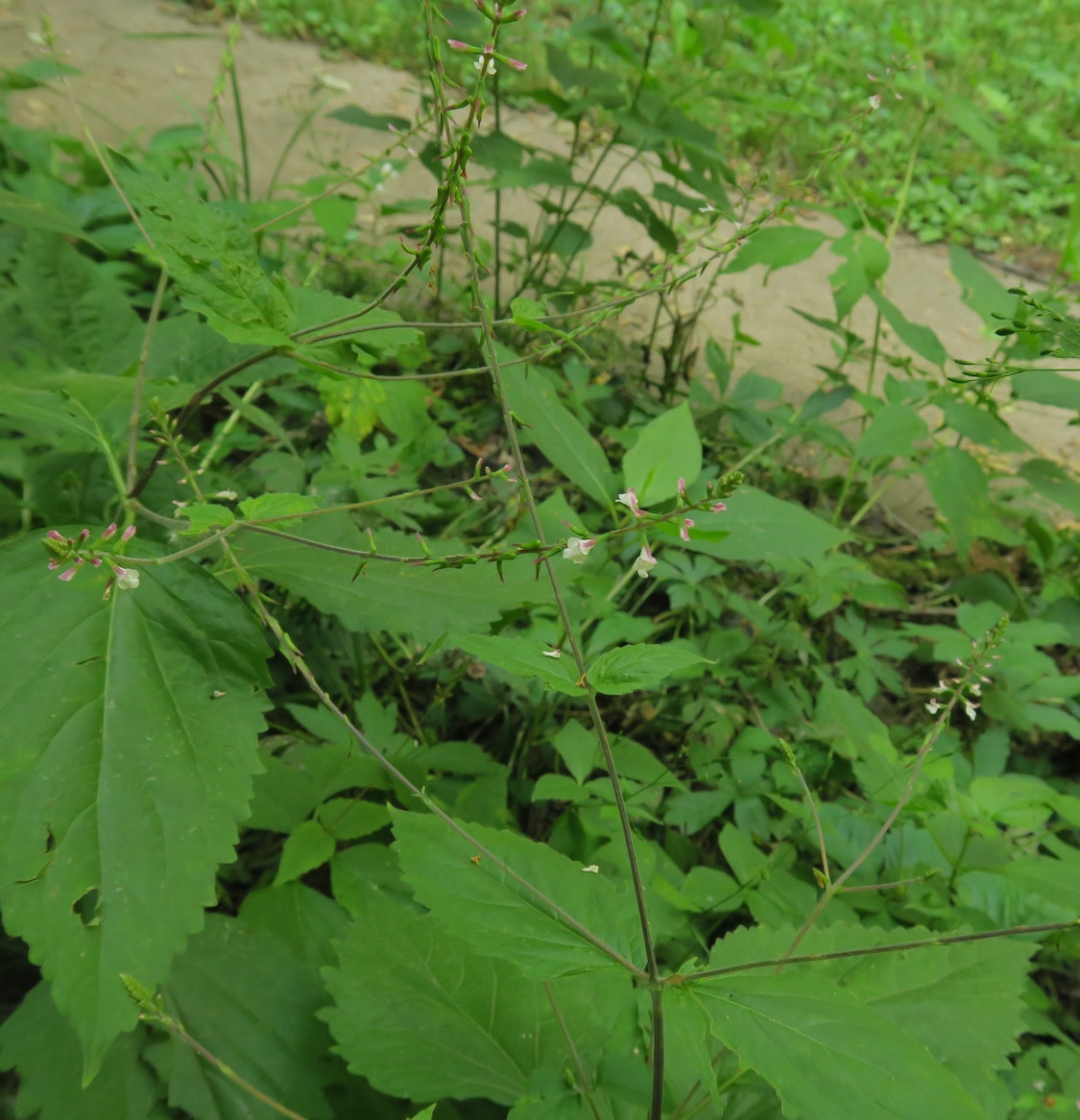 The flowers move up the raceme. 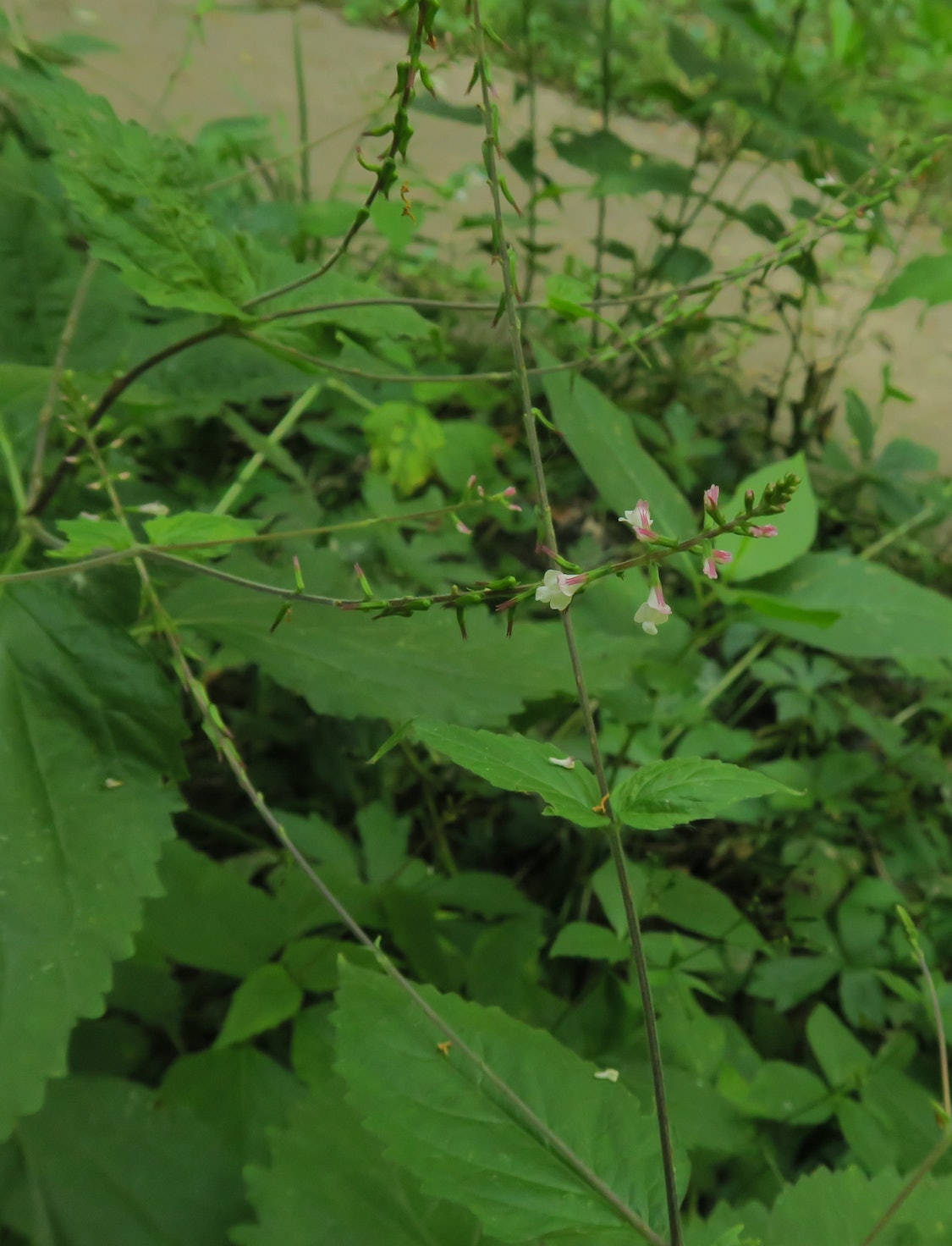 In the lower left corner of this picture, you can see fruit developing on a honewort plant that bloomed weeks earlier. 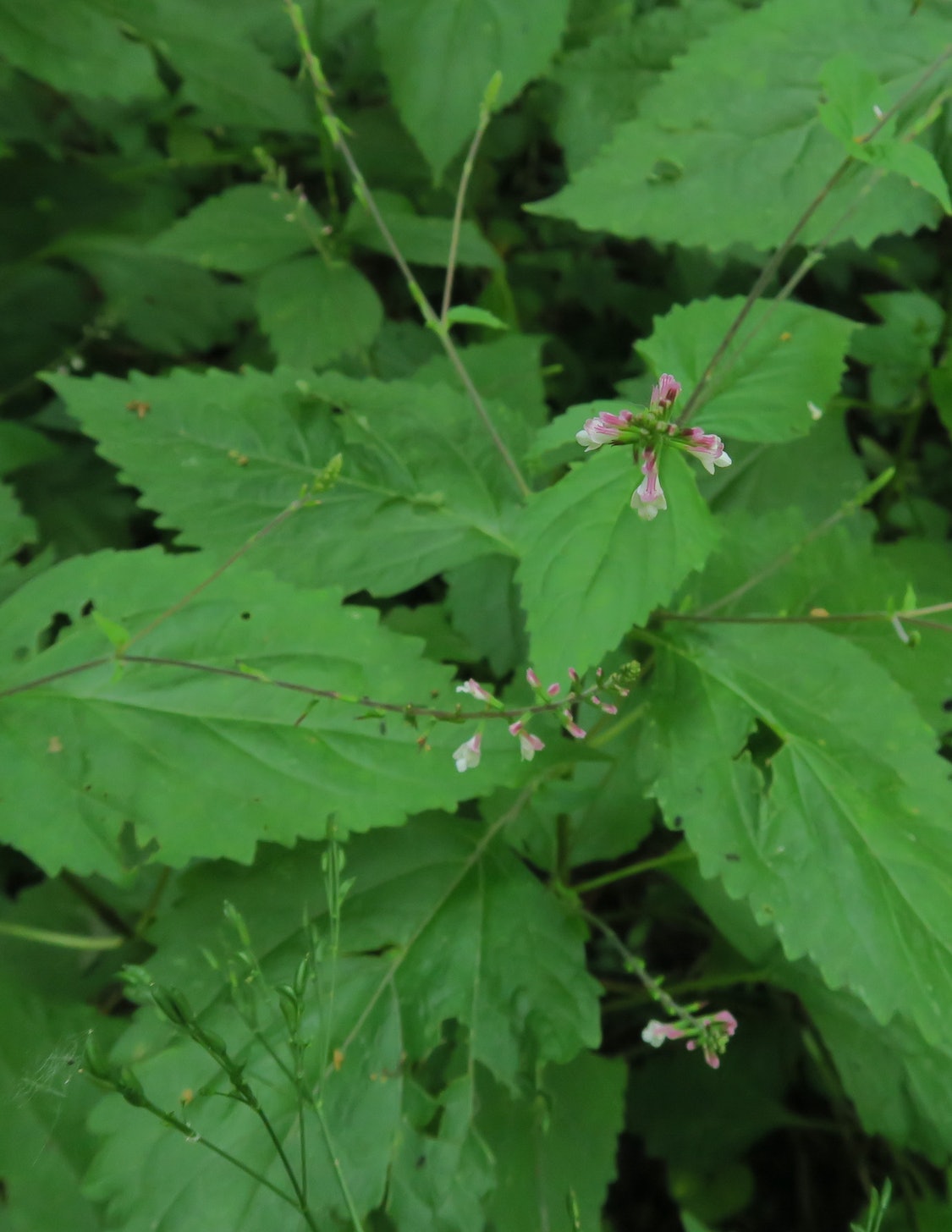 A honewort plant with fruit is visible near the upper left here, growing among the American lopseed. 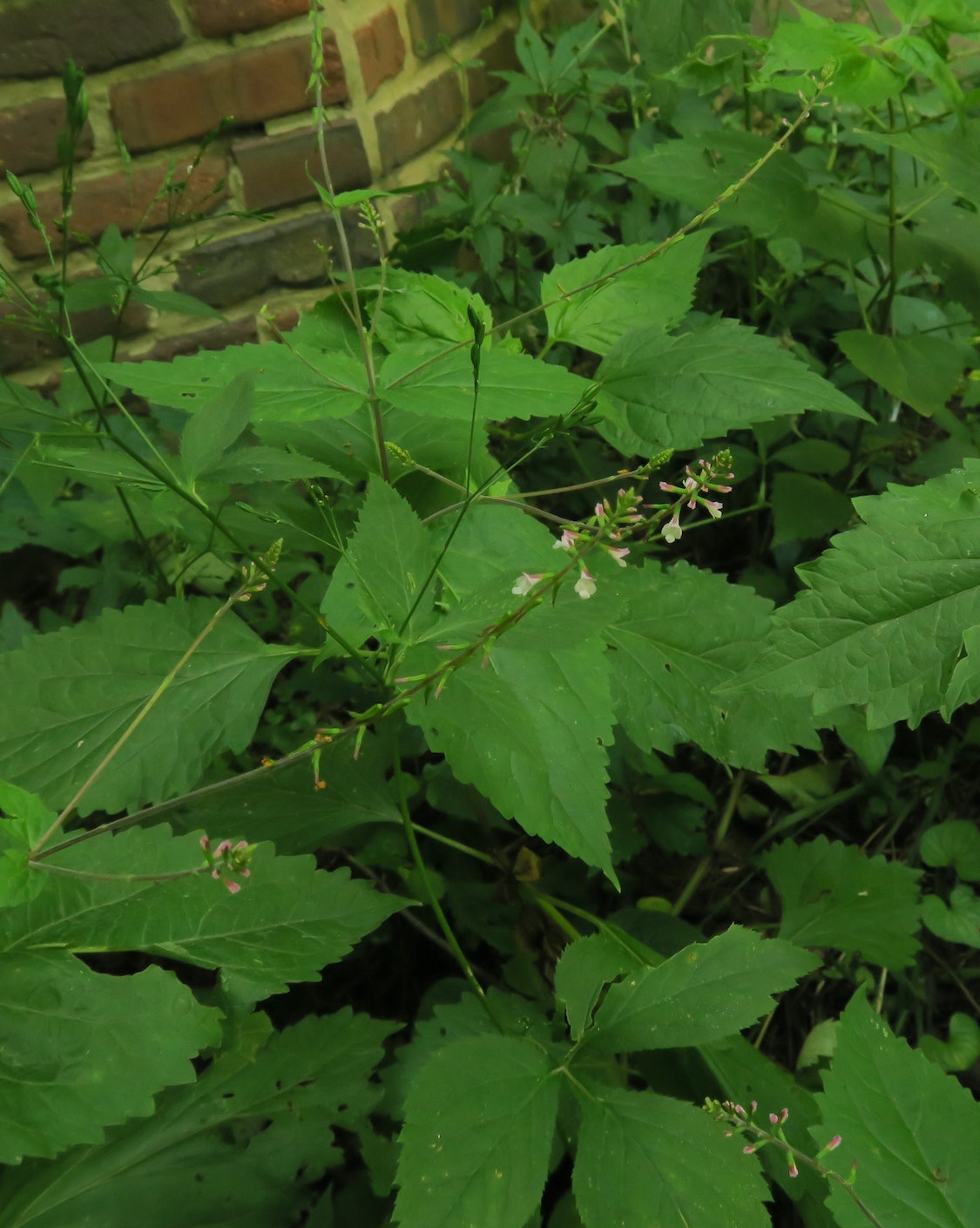 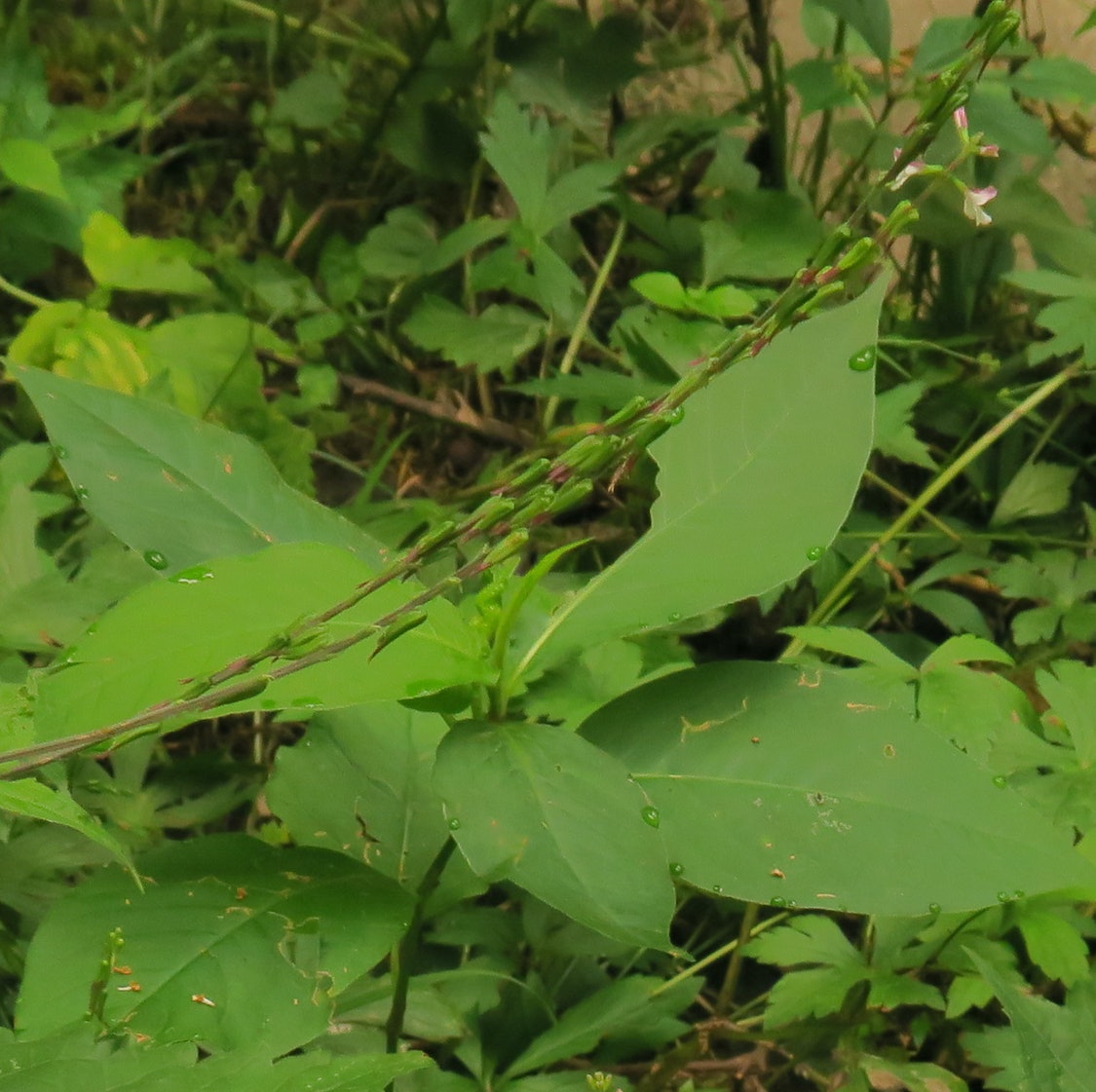 Final note: Minnesota Wildflowers writes, "American Lopseed and Pointed-leaf Tick-trefoil both have pink spikes and grow in the woods at the same time, sometimes right next to each other." I haven't found any pointed-leaf tick trefoil near my home, unfortunately. But here's a picture of those lovely flowers, which I photographed five years ago on a visit to Maquoketa Caves State Park in Jackson County. 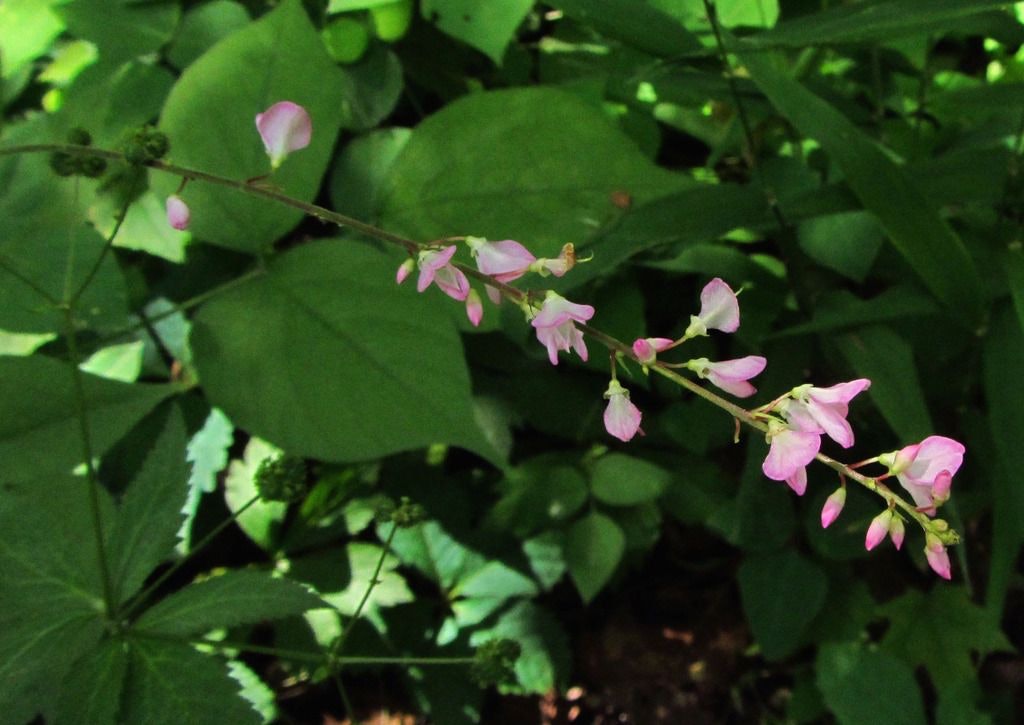