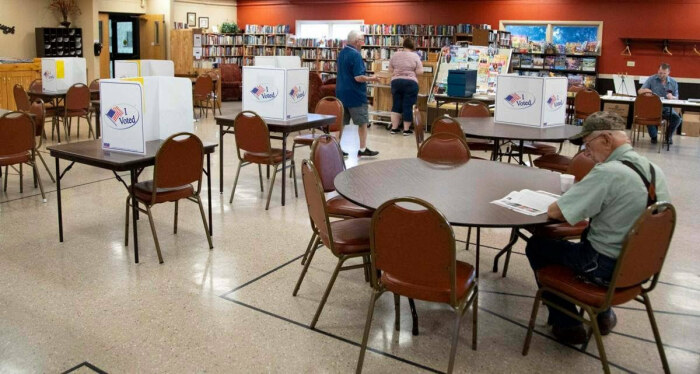 After the 2020 election, the U.S. was forced to fight two raging viruses. COVID-19 killed more than 600,000 Americans and continues to plague the world. The “Big Lie” virus killed a once proud political party and continues to threaten our system of government.

The COVID-19 virus continually mutates and spreads. We don’t know the exact origin, and it’s hard to identify its carriers, but we’ve sure seen the destruction it causes. Fortunately, the coronavirus vaccine is now easy to get.

The antidote to the “Big Lie” virus is believing the truth, but that’s harder to administer. Unlike COVID-19, we know its origin: a narcissistic ex-president who refuses to acknowledge he lost an election, citing non-existent voter fraud without shred of credible evidence.

Republicans who refuse to call out Donald Trump’s lie are carriers of the Big Lie virus and continue to spread it to the unvaccinated GOP base.  As with COVID-19, we’ve seen the destruction this virus causes. On January 6, we saw Trump’s true believers storm the U.S. Capitol, trying to subvert the peaceful transfer of power.

his past winter, the Big Lie virus also seeped into sixteen Republican-controlled state legislatures, including Iowa’s. GOP lawmakers adopted restrictive new measures, pretending to fight voter fraud, in order to please the Trump base and make it harder for certain groups to vote.

But that’s old news. Now, there is a new threat.

There are no statewide or national political elections in 2021, making this an “off year.” But if you’re interested in your city government or school district, 2021 will be a very “on year.” My fear is that candidates will carry the Big Lie virus into local elections, especially in school board races.

School board elections have always been nonpartisan in Iowa. Voters often have no idea whether a candidate for school board belongs to a political party, unless the candidate or an opponent makes partisan affiliation an issue, or the voter knows the candidate personally.

But the Big Lie virus could change nonpartisan school board elections into another partisan battle ground.

In several Iowa communities, conservatives have formed pressure groups, seeking to influence school boards regarding curriculum. They plan to lobby school board members and run candidates in this November’s elections.

Two groups active now are “No Left Turn,” organized in the Des Moines suburbs of Ankeny and Waukee, and “Ames Can Do Better.” That group originally organized against the Ames school district’s plans for a Black Lives Matter week of action in February.

The majority party in the Iowa legislature set the stage for groups like this when it passed the so-called divisive-concepts law in an effort to ban the teaching of systemic racism in government diversity training. In addition, Republican leaders are trying to change public school and university curriculum by pushing Critical Race Theory as their next political wedge issue. Never mind that they can’t even define that term. They know it’s bad.

Don’t get me wrong: there is nothing wrong with like-minded citizens joining together to influence elections. What is wrong is when a candidate backed by one of these groups hides their real agenda.

If the candidates from one of these groups loses a local election, will they concede and go about their business? Or will they spread the Big Lie virus by demanding recount after recount, and audit after audit, or threaten insurrection against the school district and county?

After all, Trump’s minions are still pressing the issue eight months after the 2020 election with ninja auditors in Arizona, to wild applause from his followers in other states.

How do we keep this infection from spreading locally? First, find out who the candidates are. Ask some questions and demand some answers. Here are a few possibilities:

Second, watch how a candidate campaigns. If he/she attacks existing board members from the start and never really goes beyond attacking, you have a candidate who is more negative than interested in protecting the future for students, educators and parents.

Third, follow the money. You’d be surprised how much money might be involved in a school board race. Watch to see what individuals or groups are contributing. Look to see who has volunteered to work for the campaign. If it’s not clear, ask the candidate directly what groups are helping.  Note: Unless a group is a registered political action committee, it cannot legally contribute to a campaign for an elected office.

We do not want the Big Lie virus to consume us locally. Let’s keep local elections nonpartisan, fair, and without a nightmare ending.