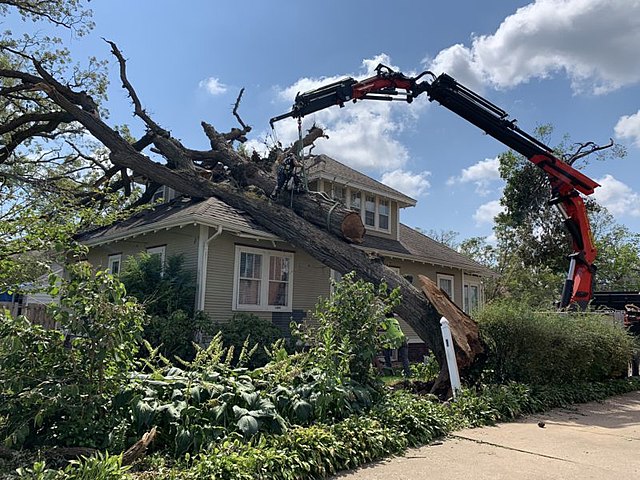 Eric Gutschmidt has been a real estate developer for twelve years, is owner of Gutschmidt Properties, and serves as president of the Wellington Heights Neighborhood Association in Cedar Rapids.

Am I the only one who noticed that it’s been hotter than usual this year in Cedar Rapids? When I wake up in the morning the weather forecast often projects temperatures in the 80s, but by midday it is already in the 90s.

The forecast is based on historical weather data from back when we had trees, and well, that ain’t it right now.

As a landlord, I know tenants are having problems keeping their houses cool, even with the air conditioner running nonstop. It’s not just the increased temperature making the AC’s struggle. Many of my houses were shaded by nearby trees; now they are in direct sunlight.

Cedar Rapids lost half of our tree canopy last August. The increase in direct sun means my houses are hotter inside than they used to be at any given exterior temperature. When I remodeled in the past, I sized out the HVAC systems with historical averages in mind and didn’t always insulate as well as I could have.

This problem isn’t unique to me or to landlords. The entire city is experiencing the increased need for AC and will suffer from it for decades, until the trees grow back.

So what can we do? Unfortunately we don’t have many options, and the ones we do have are not easy fixes–unless Steve Shriver can invent some miracle grow that makes trees 40 feet tall in a year.

Here are a few choices: we can upgrade all of our furnaces and central air conditioners, we can mount solar on all of our roofs, or we can add more and better insulation to our houses. The rule of thumb here is that if it’s easy it ain’t cheap, and if it’s cheap it ain’t easy.

Furnaces and AC’s are sized to the home that you have, and as a general rule they are sized with a 20-degree swing in mind. So when it’s 90 degrees outside, the AC should be able to cool to 70 degrees without a problem.

Traditionally, Cedar Rapids has had only a handful of days a year when the high temperature exceeded 90. Now we will have entire weeks or perhaps months in the 90s. That means interior temperatures in the mid to high 70s, even 80s, assuming the HVAC system is running nonstop.

If you installed too small a system, it will run continuously and be very expensive, and not even keep up. But if you put too large of a system in, that creates other problems. It will not run long enough and will “short cycle,” which is bad for the system.

Air conditioners do two important things simultaneously: cool and dehumidify the air. With an oversized system the air gets cooled so fast the system turns off, but the dehumidifying process takes longer. As a result, the temperature rises back up quickly. Also, a cool but very humid house doesn’t feel comfortable. It’s bad for the system and uses considerably more energy, increasing your utility bill and generating more wear and tear on your AC system.

These factors explain why so many people’s systems are struggling right now. Many of them are too small, because they were sized based on Cedar Rapids with more shade trees.

To have an appropriately sized system now, you would need to buy a new furnace and central air. (If you get a central air conditioner that is too big for your furnace, the coil will freeze up.) We’re talking $6,000 to $10,000 per house for upgraded, larger systems. And those will be more costly on your monthly utility bill. So that approach is not a great solution.

Installing solar panels would help in two ways. It would lower the cost of your bills as it generates electricity, and it would absorb some of the sunlight that would otherwise be directly beating down on and warming your house. But solar power is not cheap either. A panel system is easily two or three times as expensive as a bigger furnace and central air, and it will only lower your electric bill, not your usage. In other words, your air conditioner still may not be able to keep up on those really hot days.

That brings us to insulation, the cheapest of the three options. It comes in many forms; the easiest is blown in insulation in an unfinished attic, which would cost one or two thousand dollars. That will help your home stay cooler, lowering demand on your air conditioner and possibly allowing it to keep up on the hottest days.

Attics aren’t the only places that can have their insulation upgraded. Exterior walls, doors, windows, and basements all matter as well. Insulation also usually stops or slows drafts coming into houses, which significantly affect how well a house regulates its temperatures.

Unfortunately, adding installation to windows, doors, and walls is more invasive and difficult. You may have to drill into your walls to blow in the insulation, leaving a bunch of holes to be patched later. Or you can remove your drywall and do spray foam. Just remember: if it’s cheap, it ain’t easy.

Alliant Energy used to have a rebate program that subsidized all of this insulation. That program ended in March 2019. We should look for ways to bring it back.

Homeowners should consider adding insulation to their homes either with cash out of pocket or with a home equity line of credit. If it can save hundreds of dollars per month, then it will pay itself back faster than solar panels or new air conditioners.

The city of Cedar Rapids could help address this problem, but not by micromanaging people’s homes. The city could create a standardized energy audit, paid for by the landlord or home seller, which would empower the renter or buyer with the knowledge of a home’s energy efficiency and consumption. Then the free market would do what the free market does. Consumers would gravitate to more energy-efficient living.

To kick off such a program, the city could require it for rentals, because the city has to grant rental status and landlord license. As I’ve mentioned before, rents in Cedar Rapids are likely to increase over the coming years. An energy audit seems like a small ask from the community in exchange for the increased profits that landlords are set to make.