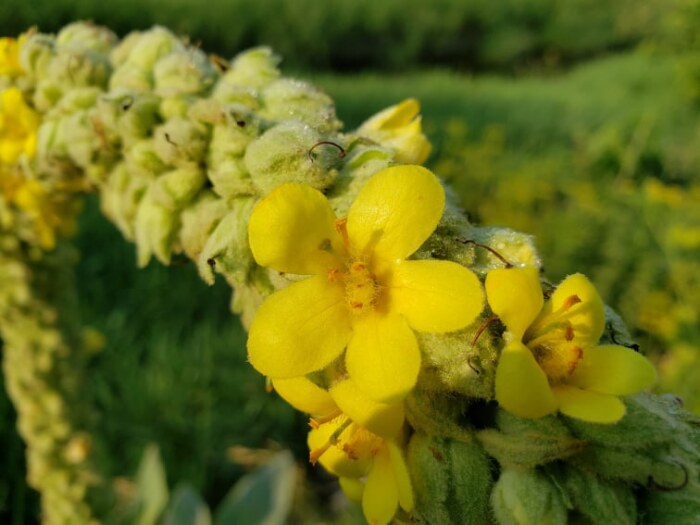 Common Mullein, Great Mullein and Woolly Mullein are all names for the same plant, a non-native weed introduced from Europe in the early 1800s. It has spread so widely that it is now considered naturalized. Common mullein can be found in all 50 states, and even though it is a weed, it is not pesty (at least not in Iowa).

Of all the Iowa wildflowers, this plant has some of the most fun nicknames, including Cowboy Toiletpaper, Quaker’s Rouge, Torch Flower, Flannel Plant, Tinder Plant, and Aaron’s Rod.

If you are a wildflower enthusiast, someone not familiar with common mullein may ask you, “What is that tall fuzzy plant that I saw on the side of the road?” 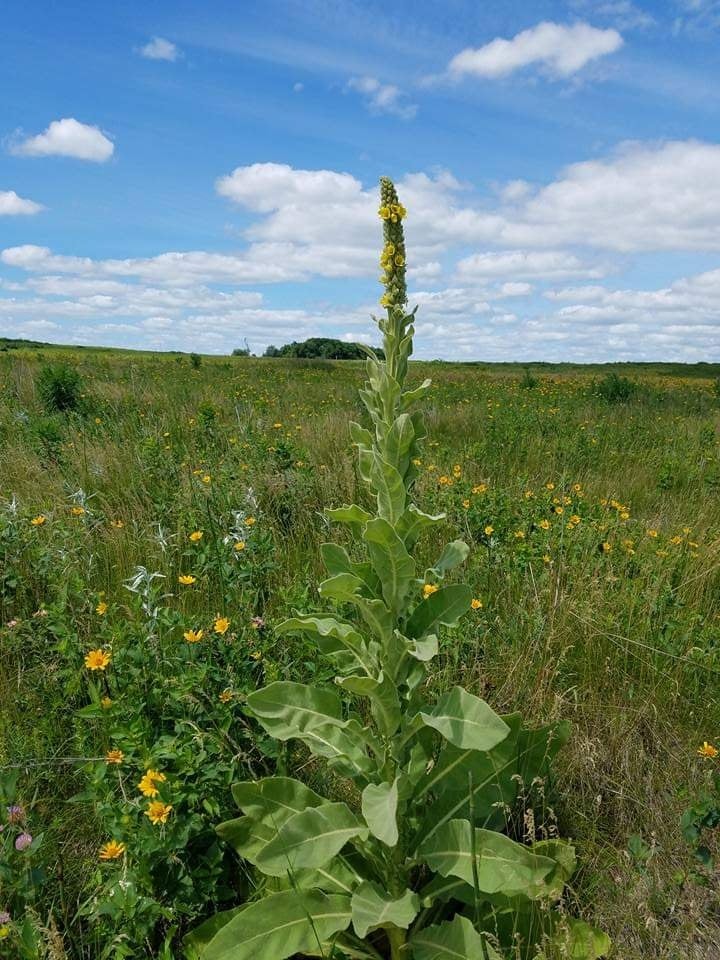 Common Mullein can reach heights of 2 to 7 feet. 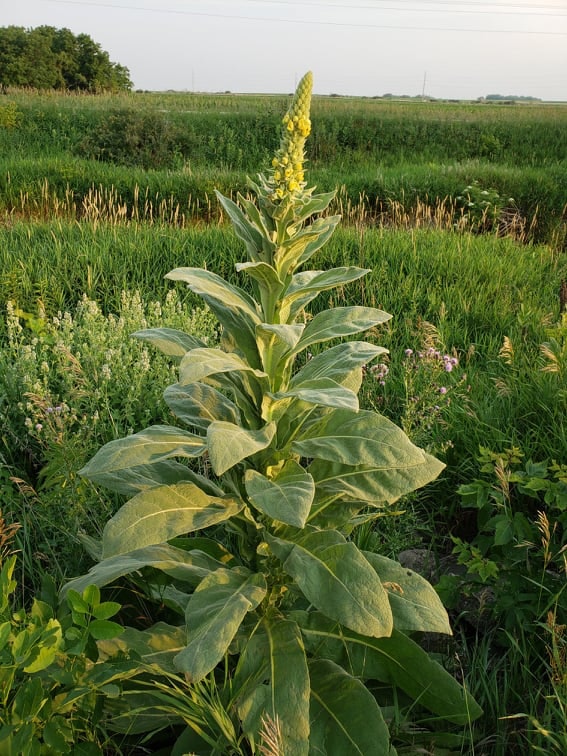 The plant’s soft, large leaves usually catch the eye first. Common mullein is a biennial and will be just a short rosette of light green leaves during the first year. 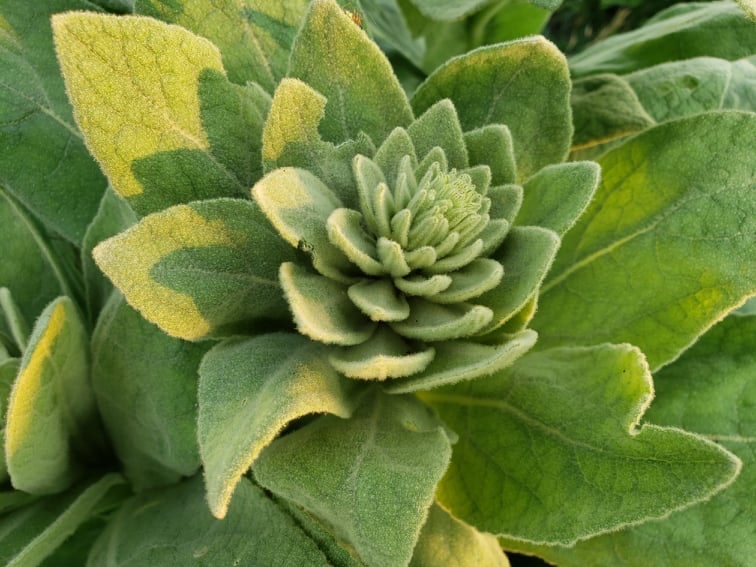 During its second year, the plant develops larger leaves, up to 15 inches long and 5 inches wide. 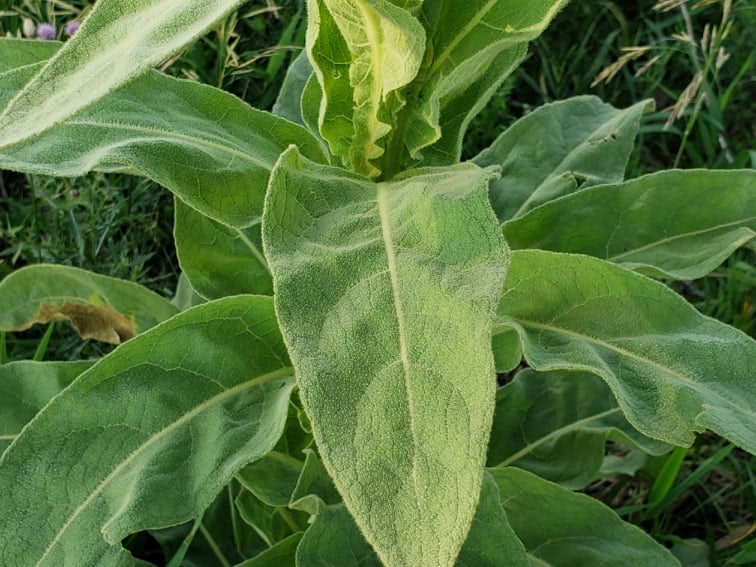 The leaves become smaller as they ascend up the erect stem. 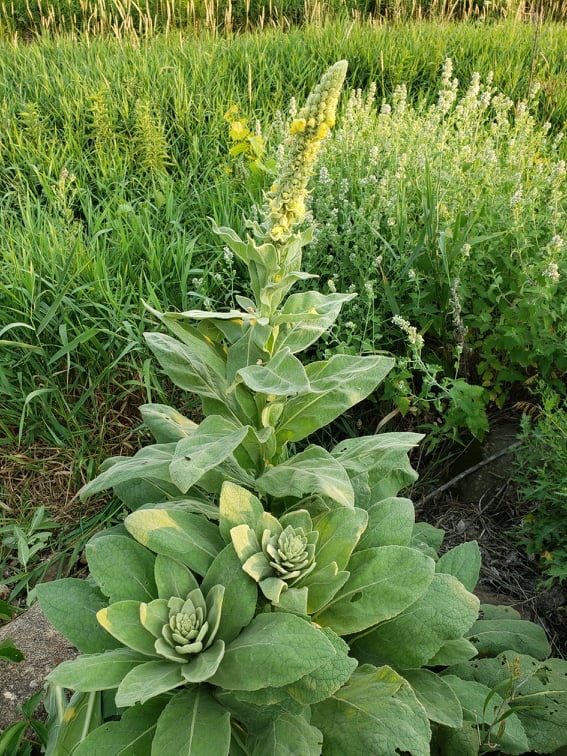 Both the stem and the leaves are covered with fine, white hairs. They make the leaves feel soft, inspiring some of the common names: velvet plant, old man’s flannel, blanket leaf. 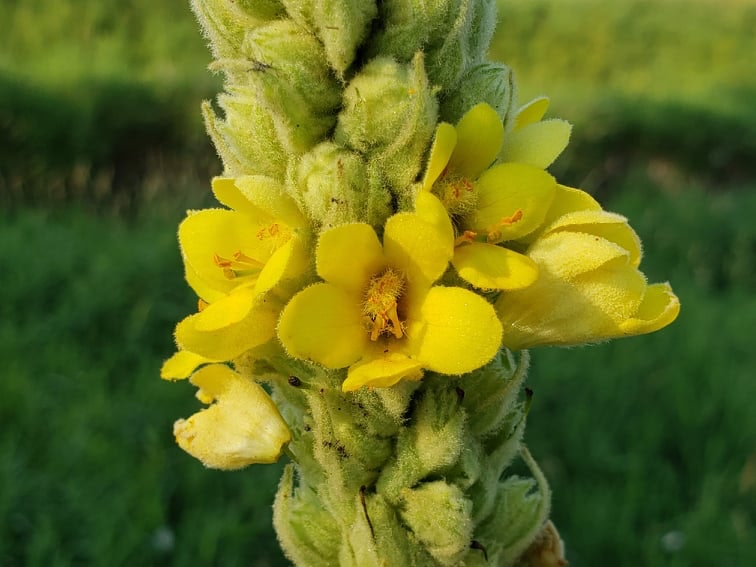 Depending on the size of the stock, there might be 10 to 40 flowers blooming at a time, I’ve noticed. There is no rhyme or reason to the blooming order. Some flowers may open near the top and some on the bottom simultaneously. 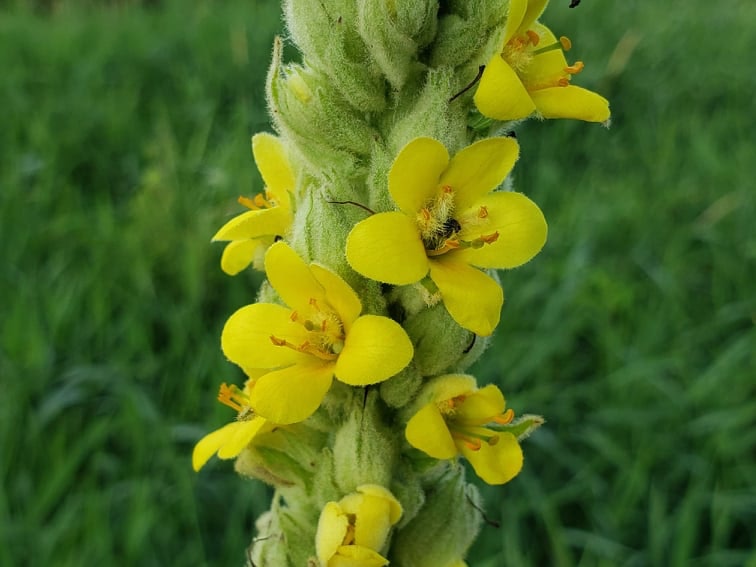 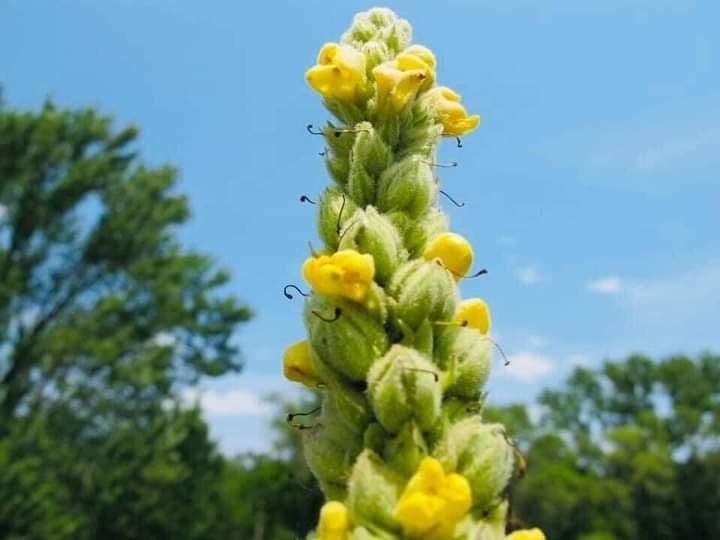 Each flower blooms for only one day. There can be over 100 blooms on one plant, but they will not open at the same time. 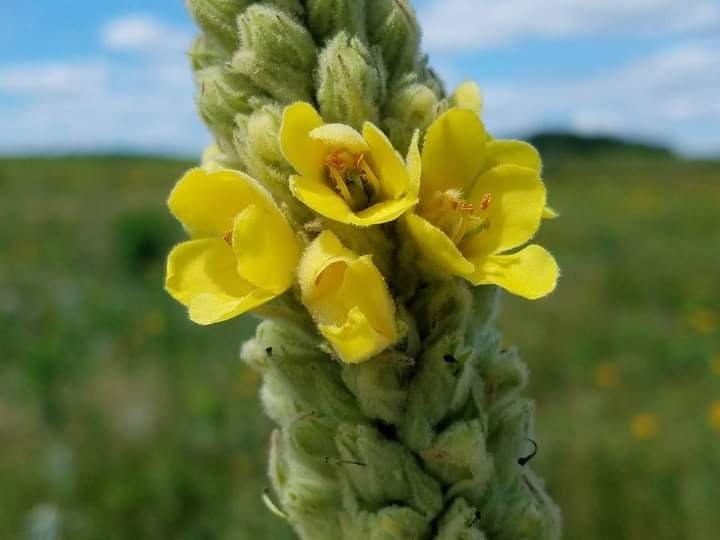 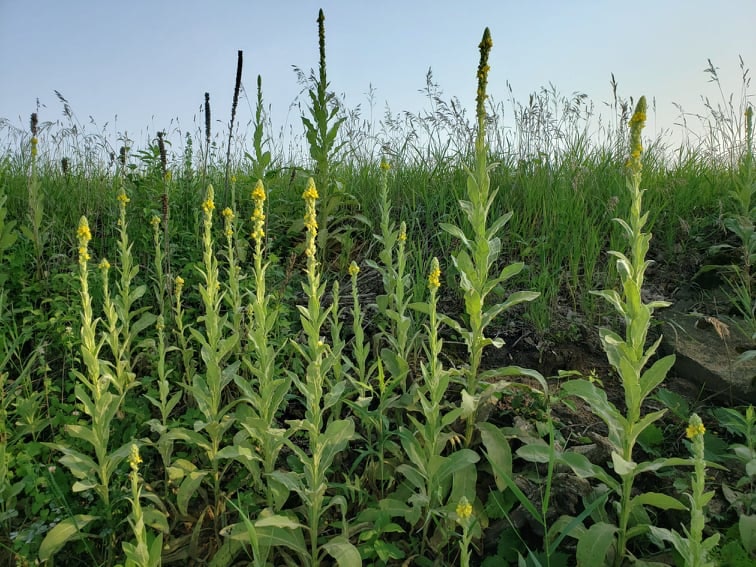 Common mullein often grows on disturbed ground, such as areas near railroad tracks. Here’s Prairie Dog enjoying a day out: 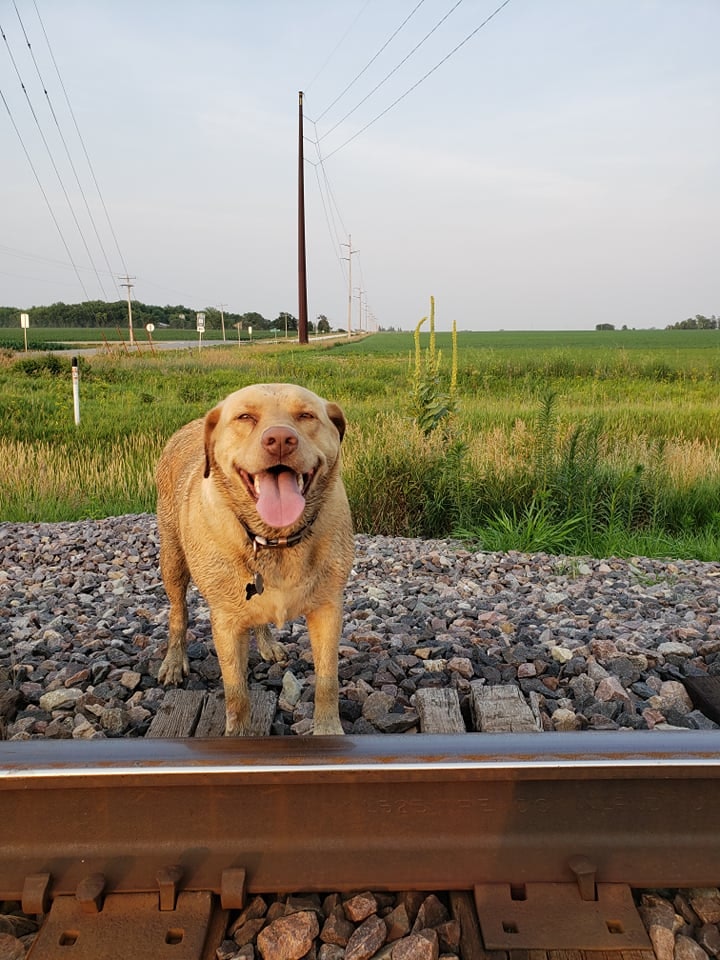 In the fall, common mullein stem dries a dark brown. It may overwinter or even be present the next summer. Where there was a flower a seed capsule develops. Each capsule can hold up to 700 seeds. So one plant with 100 flowers may have 70,000 seeds. That’s a lot! 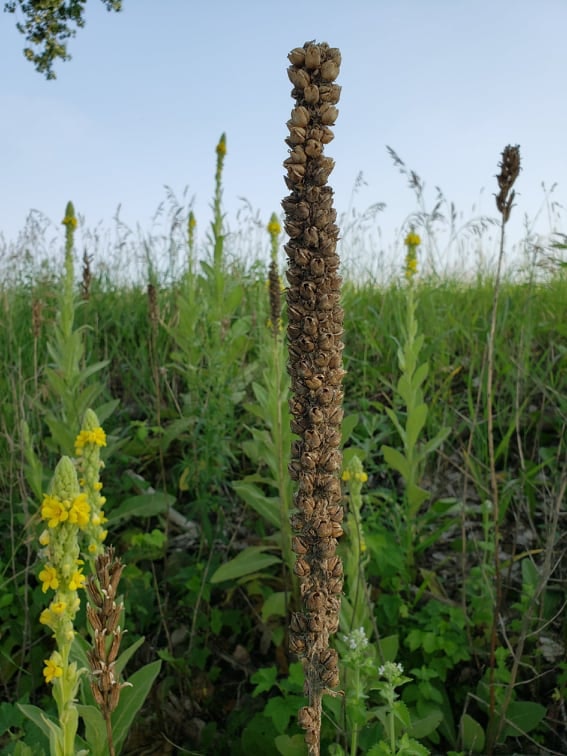 The tiny seeds usually drop next to the parent plant; however, they might get transported by animals, birds, or the wind. Common mullein seeds may be dormant for decades before germinating.

The tall stem inspired some of the other fun names. Aaron’s Rod refers to the biblical brother of Moses, whose walking staff bloomed. 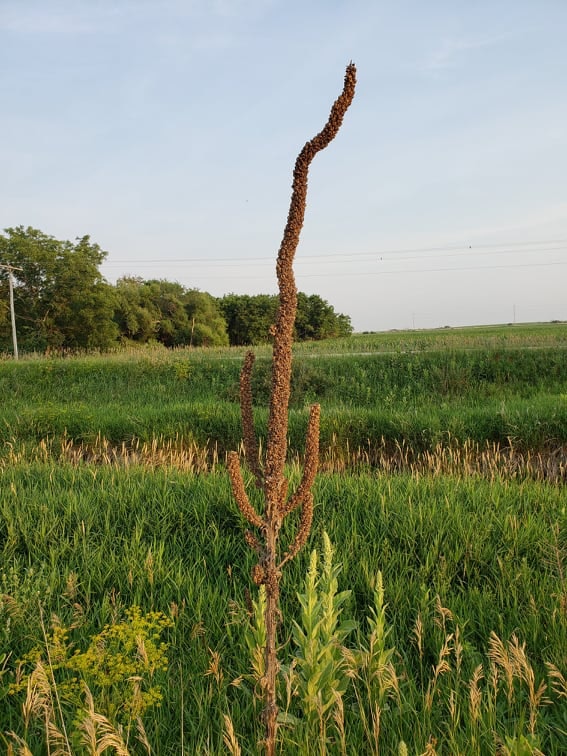 The dried stock is good for starting fires, hence the name Tinder Plant. I tried to use a stem for a torch like in medieval times (Torch Plant). My butter-flavored Crisco didn’t produce a long-lasting flame. 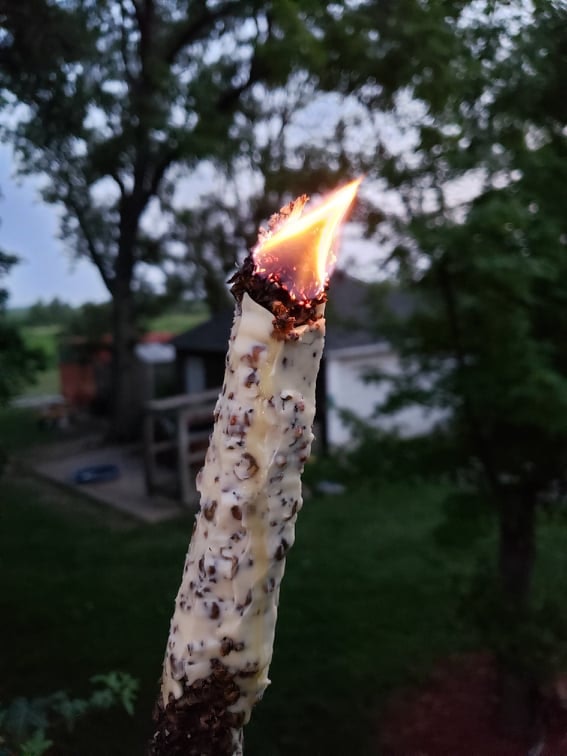 Quaker’s Rouge comes from Quaker girls supposedly rubbing the leaves on their cheeks to add a little rosy color to their complexion. Native Americans and pioneers used the soft leaves to line their shoes or long-johns for extra warmth: Flannel Plant and Beggar’s Blanket.

Finally, I don’t think I need to explain where the nickname Cowboy Toilet paper comes from. I can recommend it in a pinch, though I prefer using velvetleaf, also known as buttonweed.

I learned most of what I know about common mullein from the Illinois Wildflowers website and Phyllis Busch’s book Wildflowers and the Stories Behind Their Names. There’s more in this video from my Iowa Prairie Girl Youtube channel: