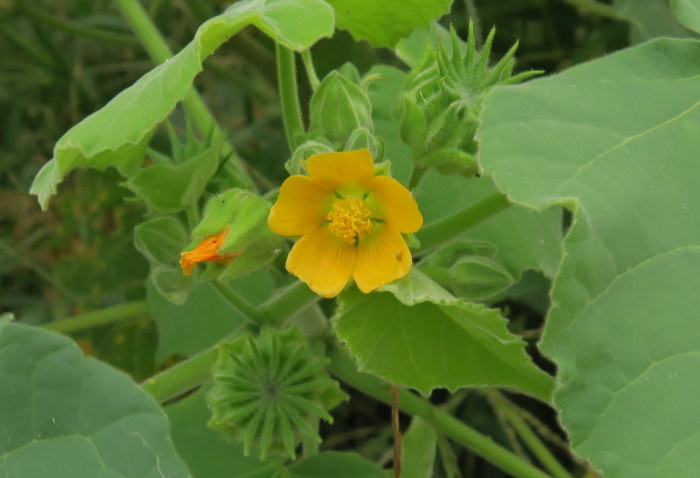 A thought experiment: can I find any flowering plant that is more prevalent and more despised in Iowa than garlic mustard, featured on this website last year?

Velvetleaf (Abutilon theophrasti), also known as buttonweed or Indian mallow, is native to Asia and was brought to North America as a possible fiber crop. It can now be found throughout the U.S. and Canada.

This plant became "one of the major weed problems in Iowa corn and soybean fields" for decades, through the 1980s, according to Iowa State University agronomy Professor Bob Hartzler and field agronomist Rebecca Vittetoe. Although "new herbicides reduced the magnitude of the problem," they write, velvetleaf "is still present in most fields." It's one of several dozen species on Iowa's noxious weed list.

The Minnesota Wildflowers website observes that velvetleaf "not only sucks out large quantities of water and nutrients from the soil, but also contains chemicals that inhibit germination and growth of other plants, allowing it to form dense monocultures." To make matters worse, it "is also a very accommodating alternate host for the serious soybean pest - soybean cyst nematode."

I've often seen these plants growing near construction sites. When some turned up around the corner this summer, next to a street that had been torn up for sewer work, I wondered how velvetleaf seeds found their way onto disturbed ground so quickly. Turns out they might have been lying in wait since the nearby homes were built in the late 1950s. Illinois Wildflowers writes, "Velvetleaf typically occurs where the soil has been recently disturbed and the long dormant seeds are brought close to the soil surface." Minnesota Wildflowers adds, "Seeds can remain viable in the soil for over 50 years."

I took all of the enclosed pictures in early September, next to a parking area behind the "Sherwood Forest" strip mall in Windsor Heights. 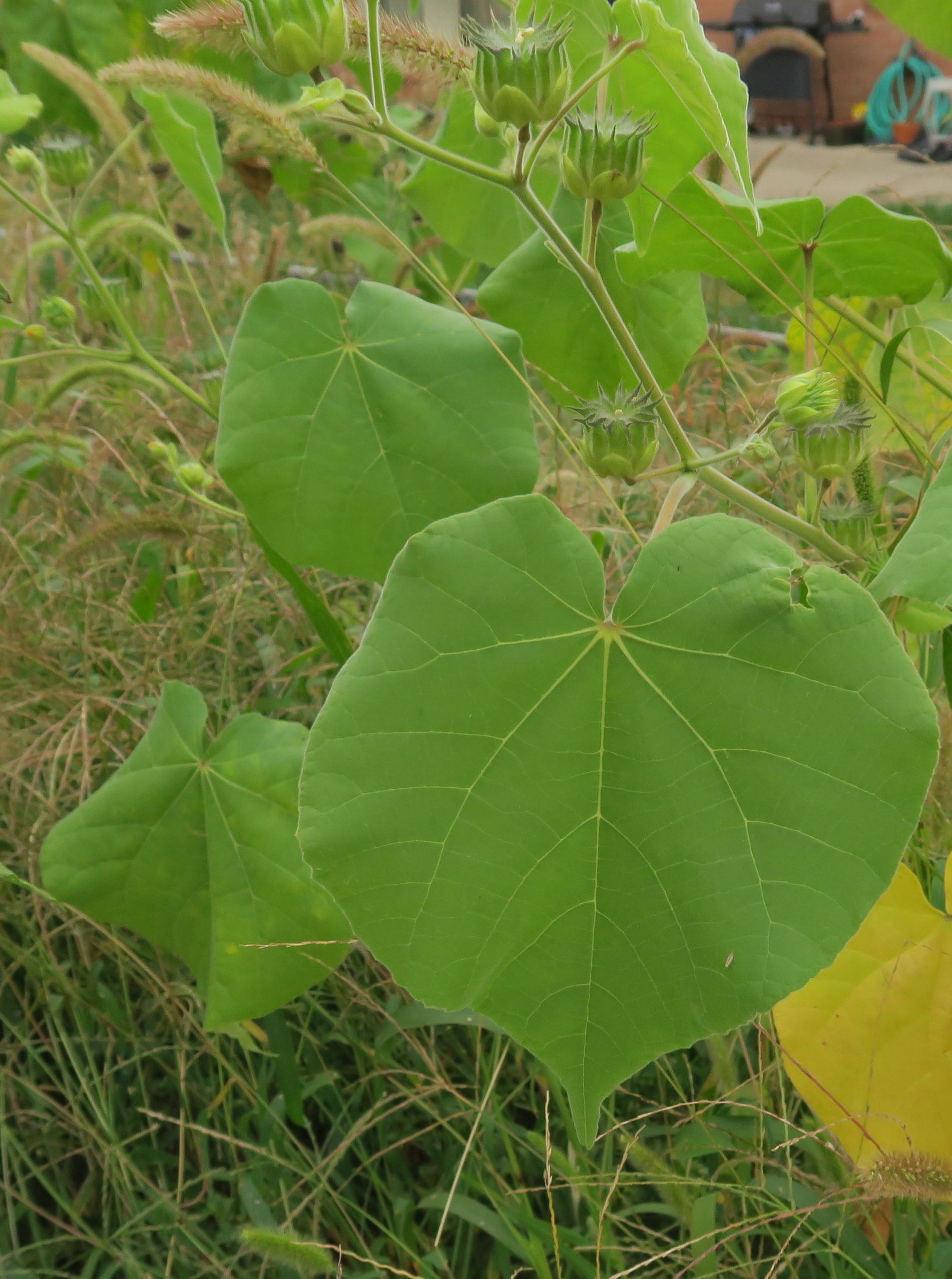 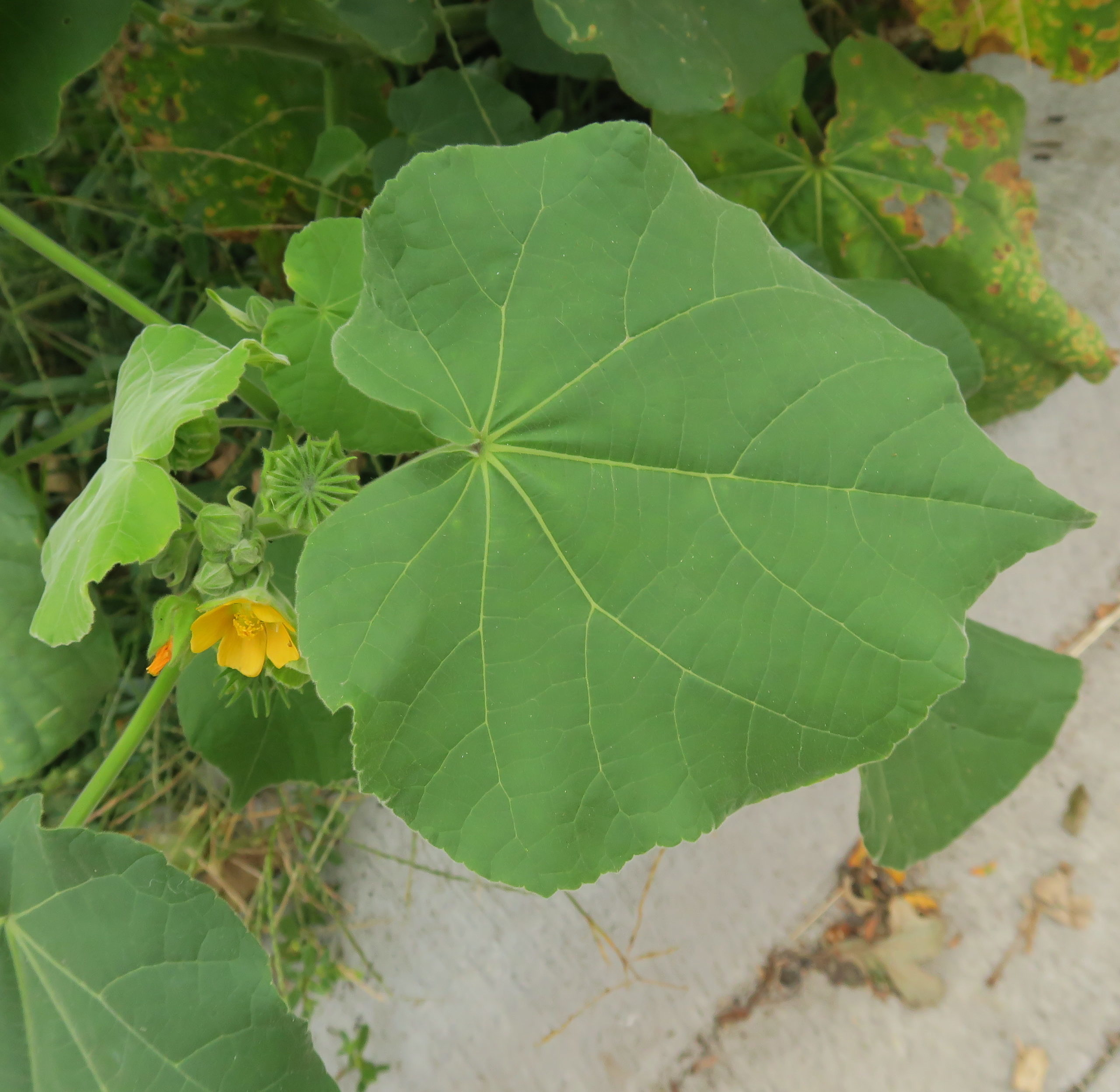 Buds are forming on this velvetleaf plant. 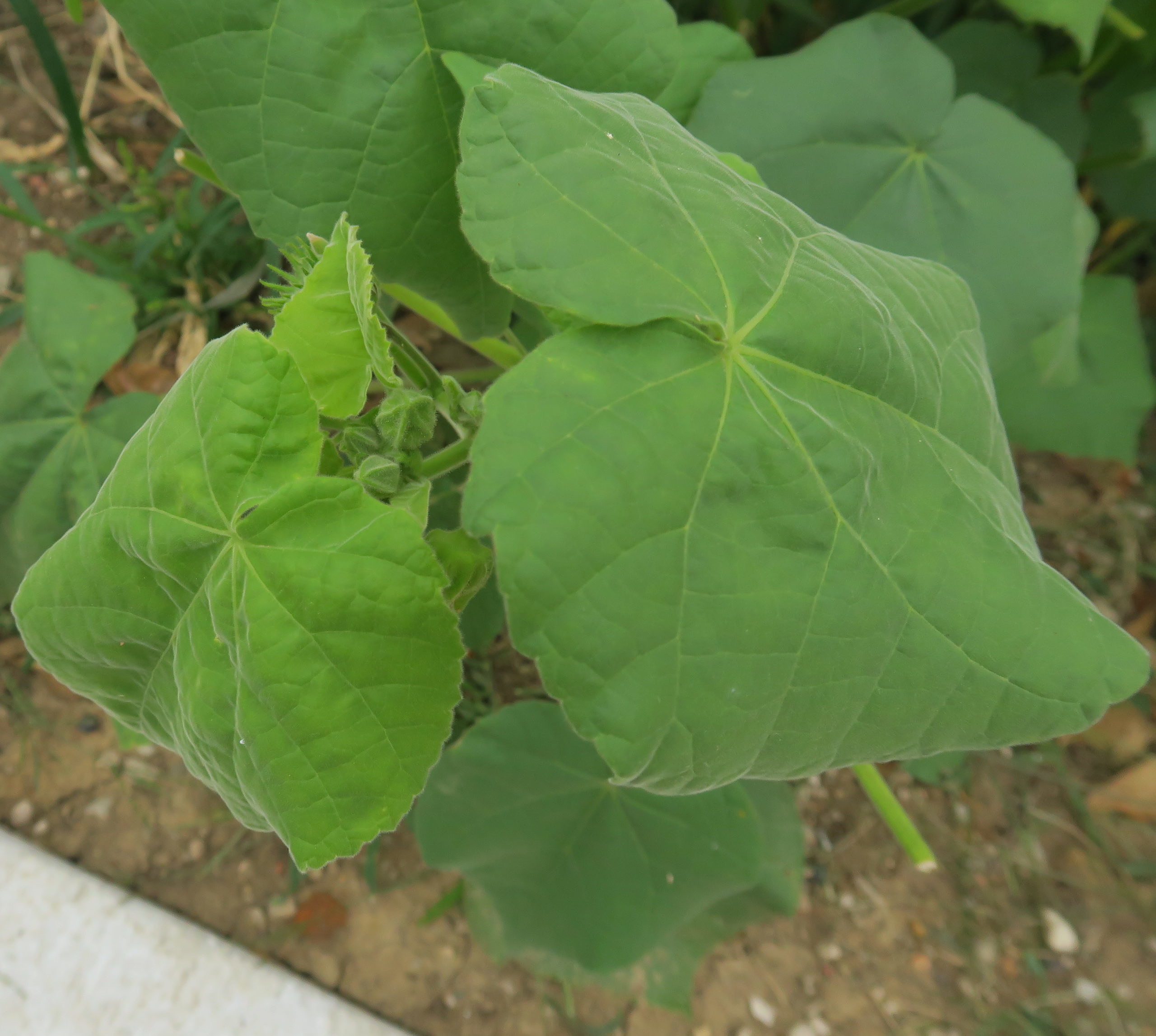 Flowers on the verge of opening. 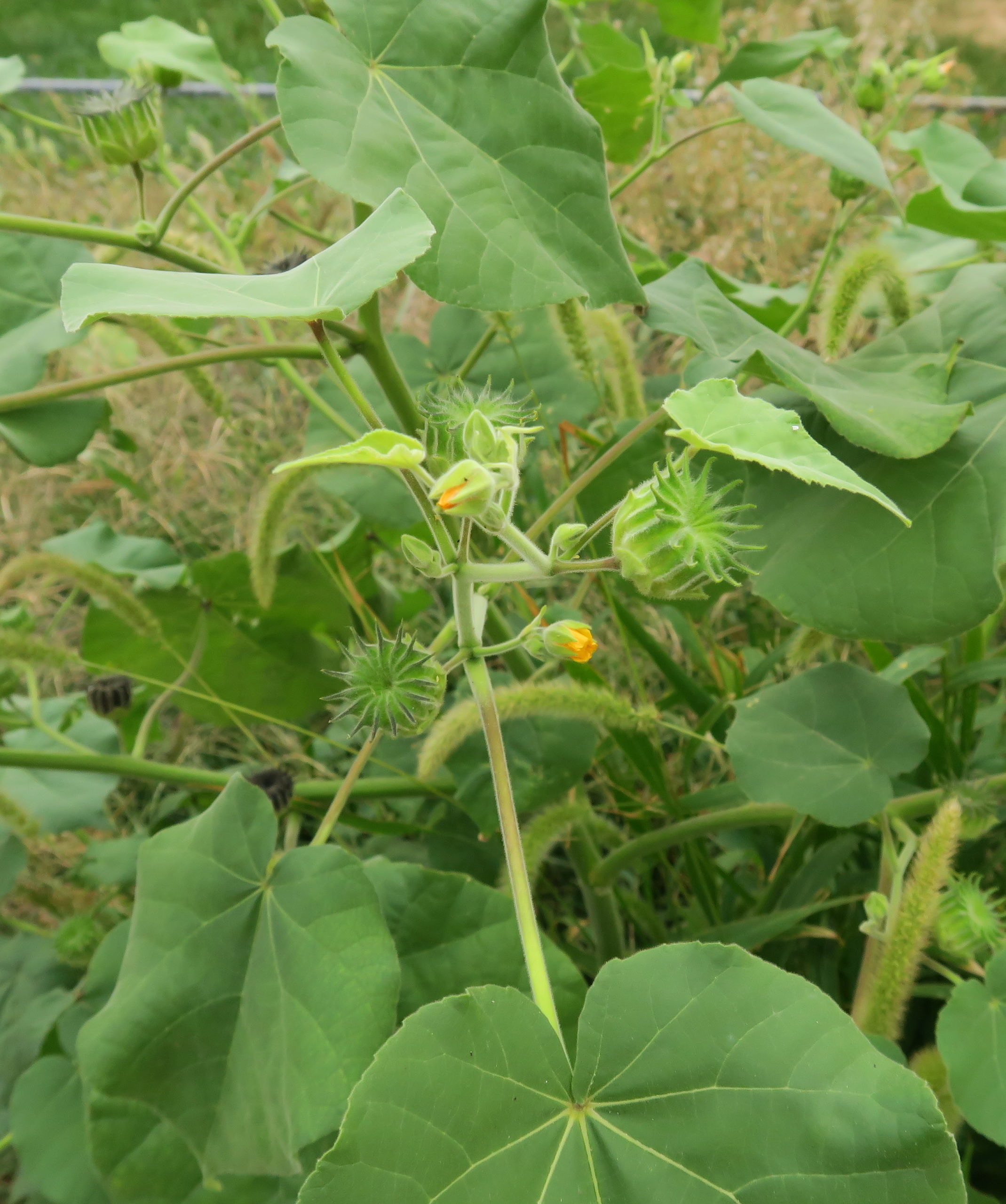 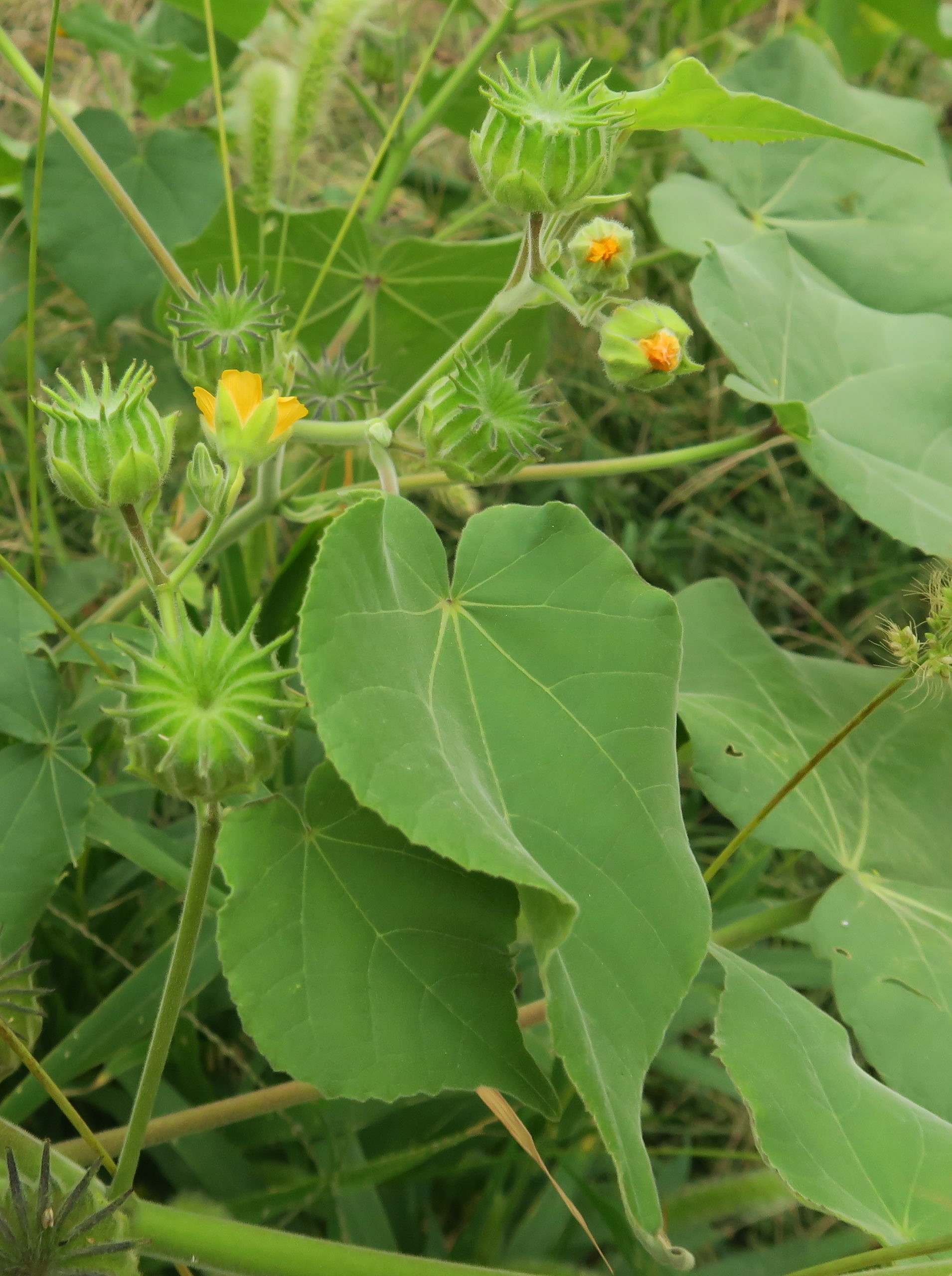 Side view of a flower starting to bloom. 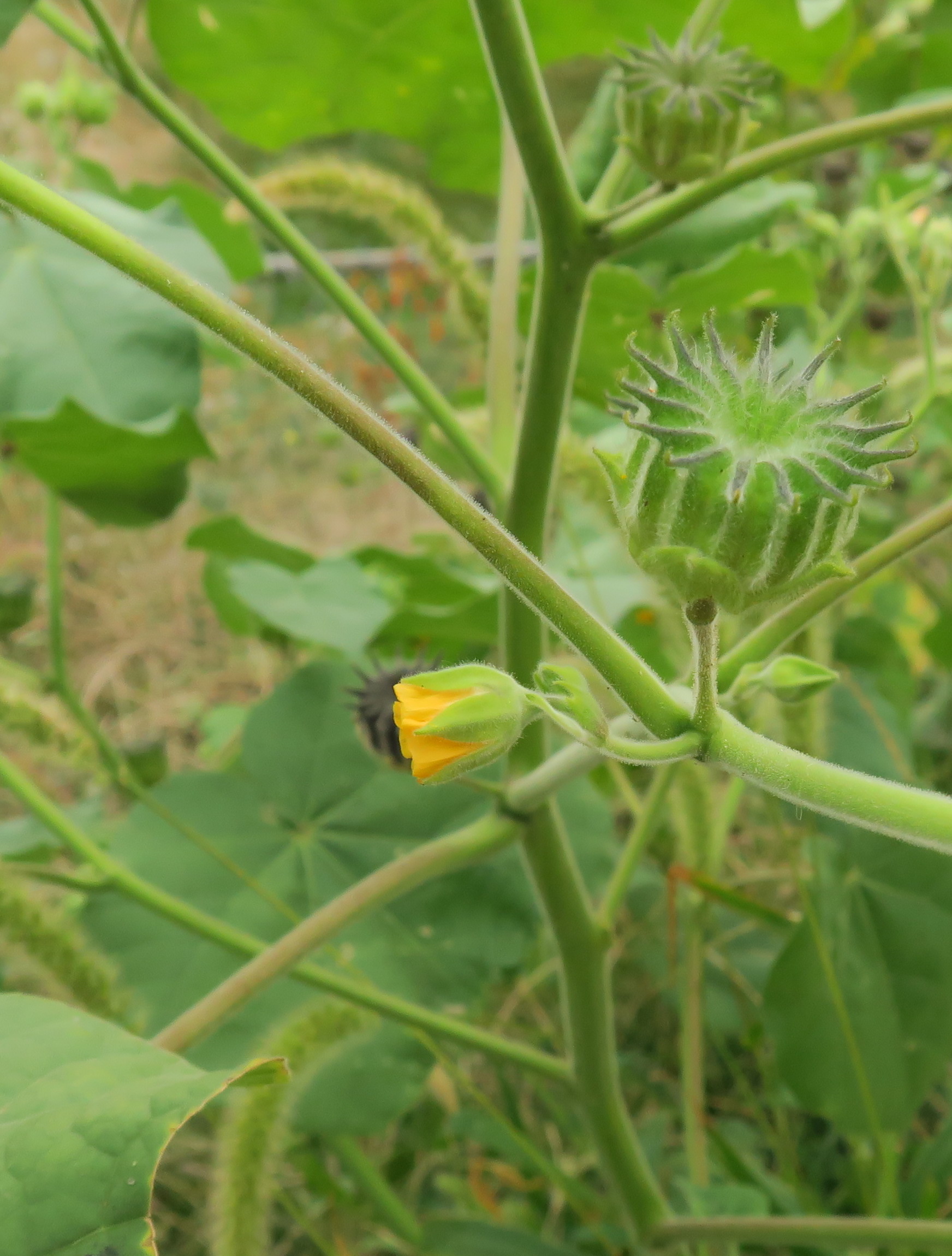 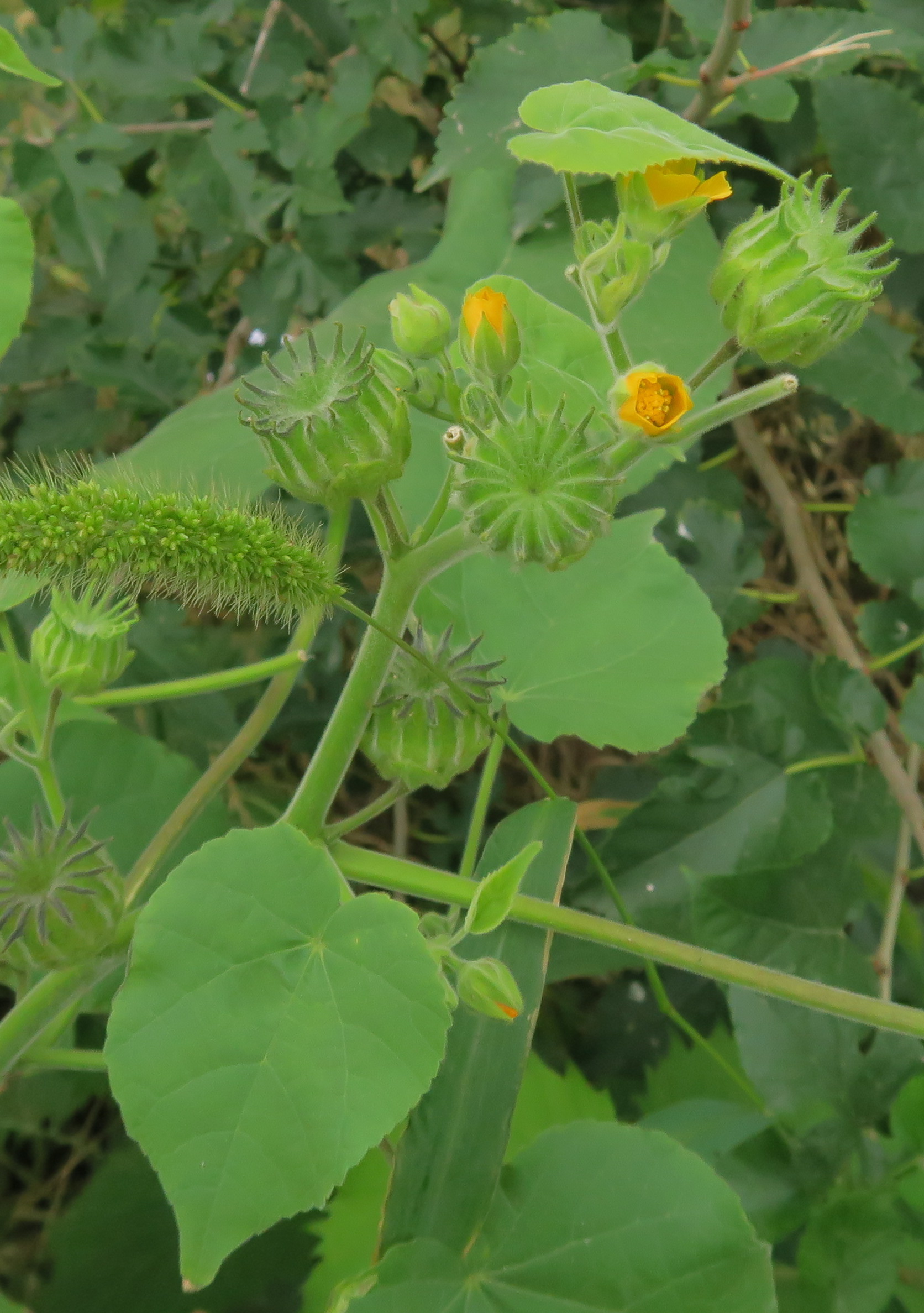 Closer look at a velvetleaf flower. 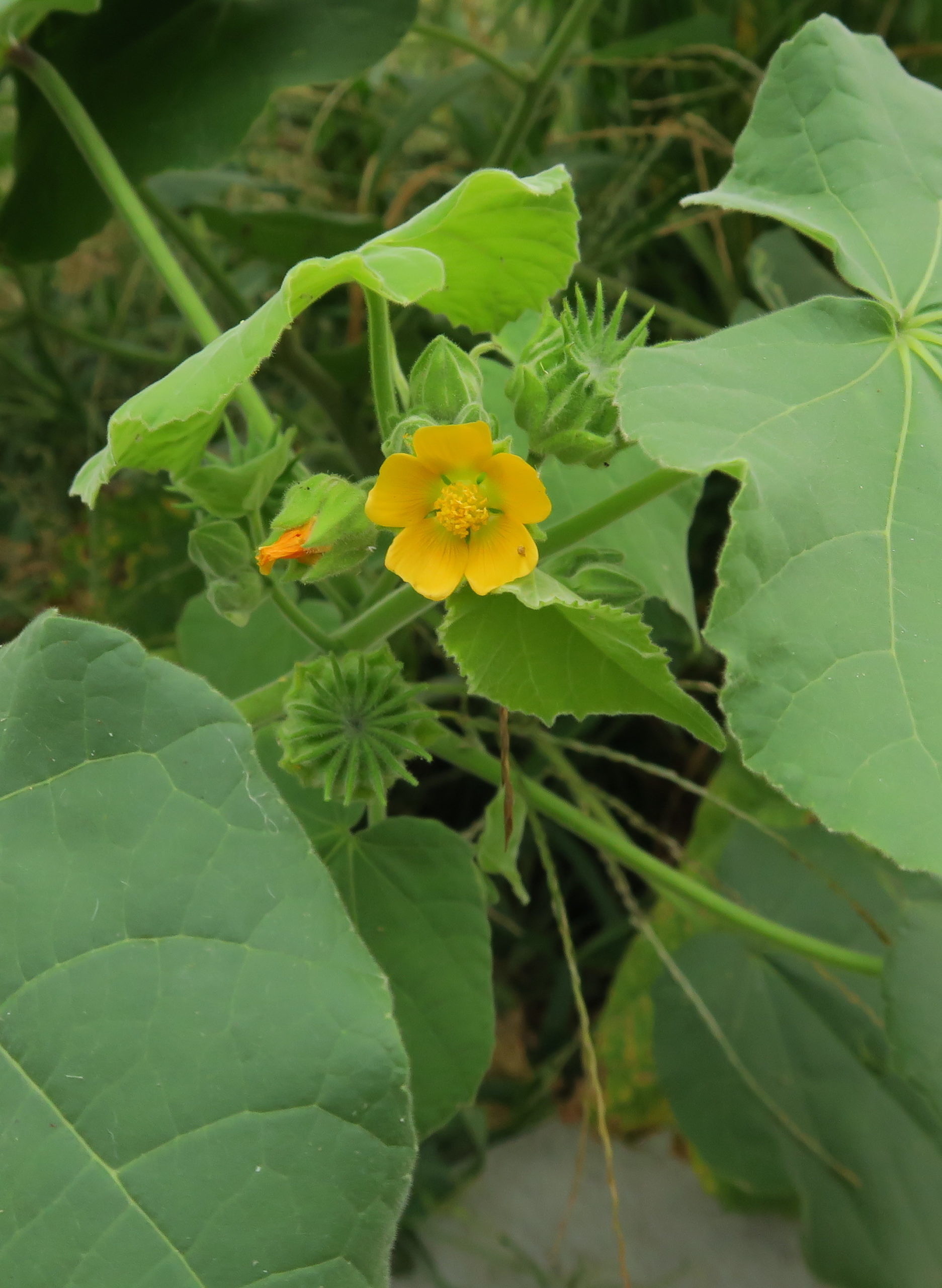 According to John Pearson of the Iowa Department of Natural Resources, the sedge you can see in this picture is barnyard grass. 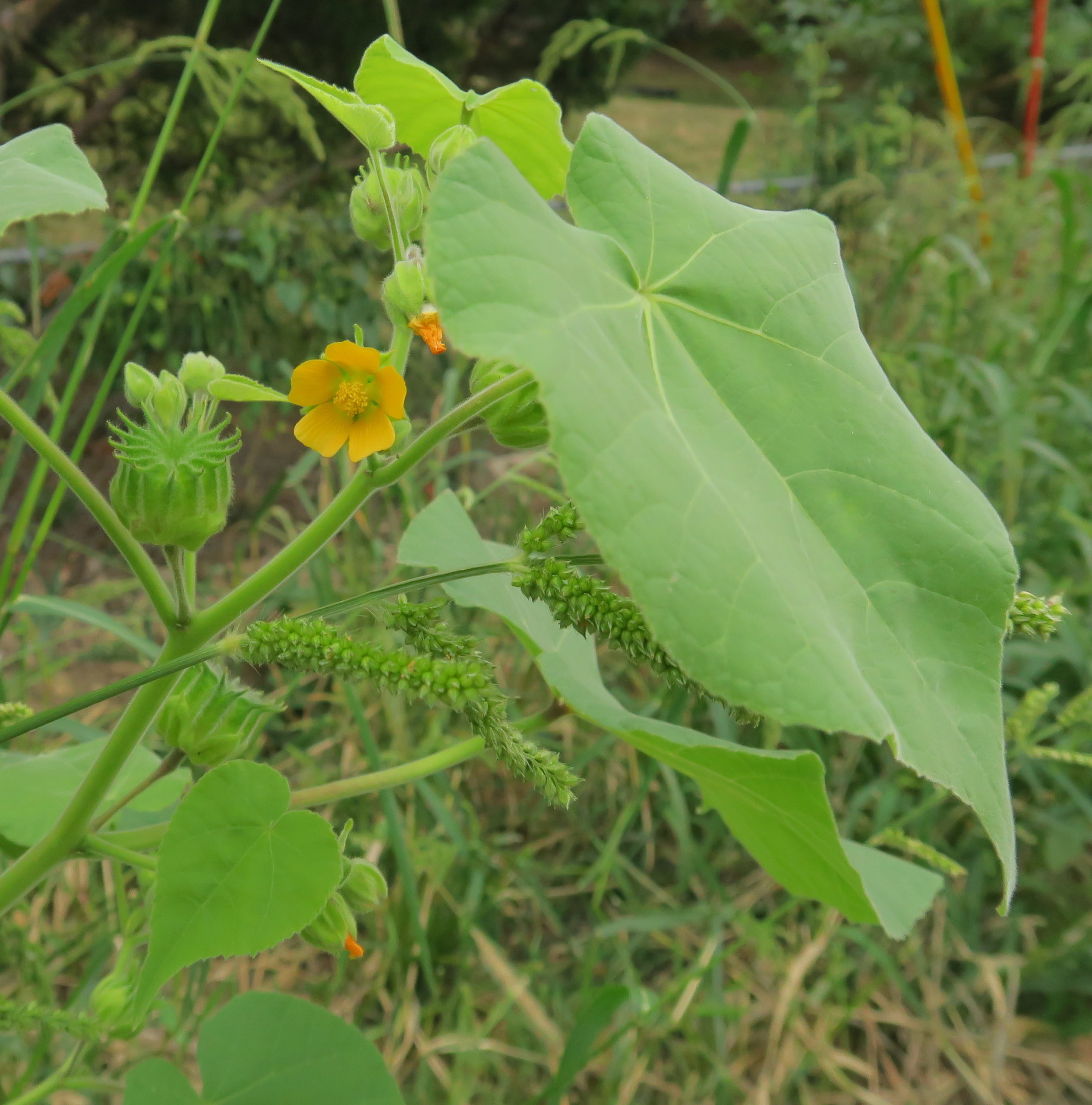 You will often find new flowers appearing on plants like this one, which already have seed pods developing. Velvetleaf starts blooming during the second half of summer but can keep producing flowers into early autumn. 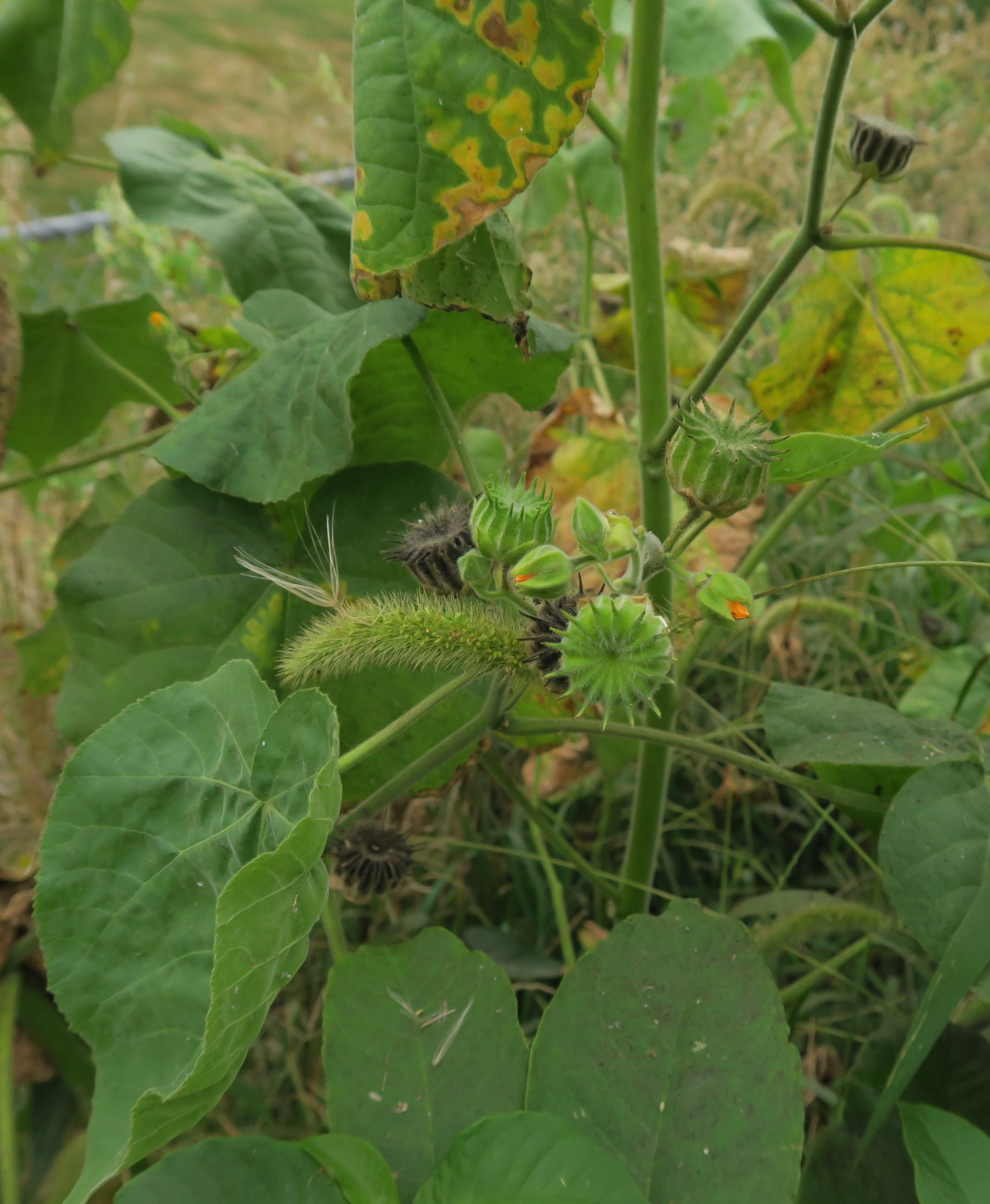 In the bottom half of this frame, the native American pokeweed is growing next to velvetleaf. 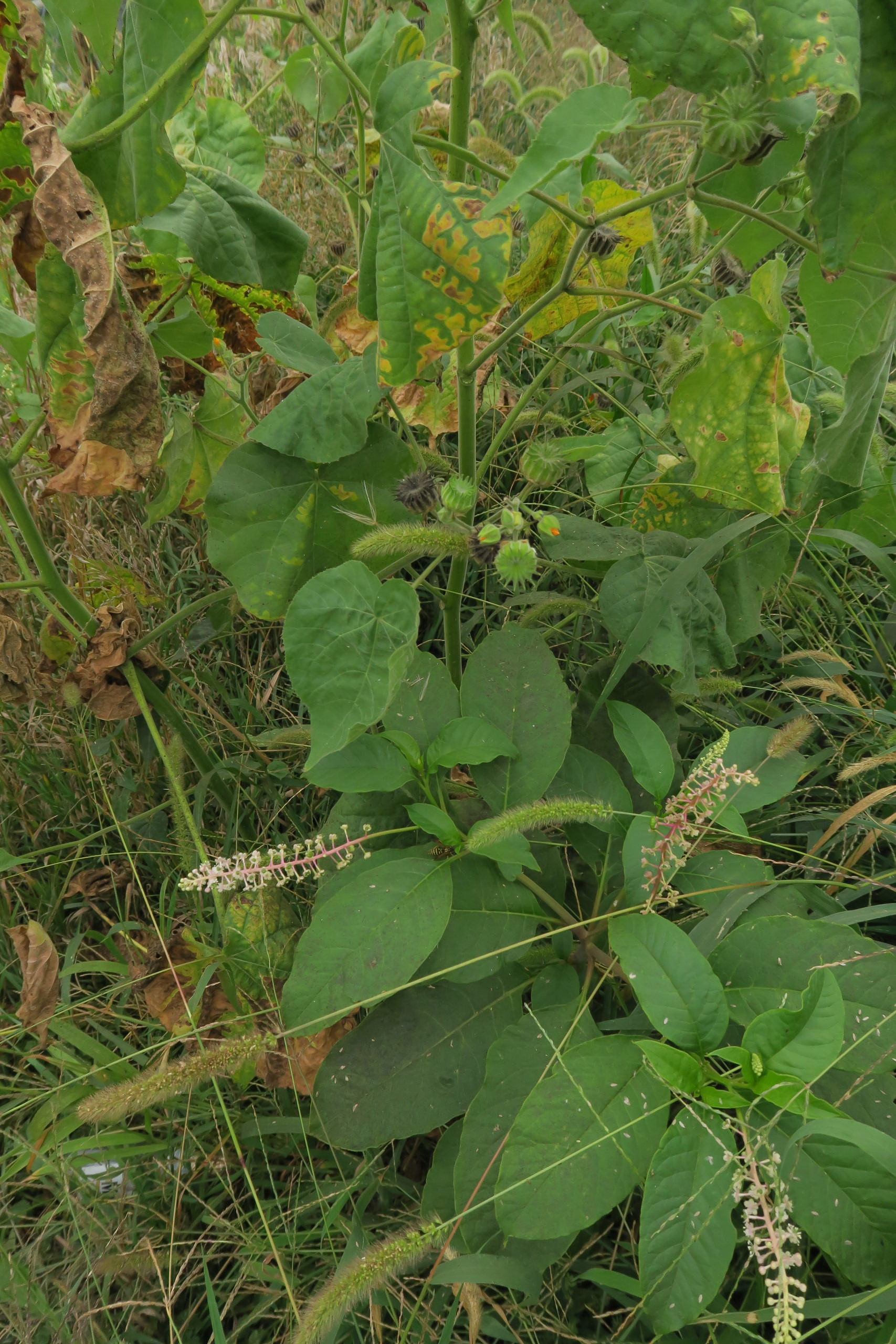 UPDATE: Some readers mentioned a fun fact I forgot to include about this plant. Its leaves work well for campers or others who may find themselves needing emergency toilet paper.