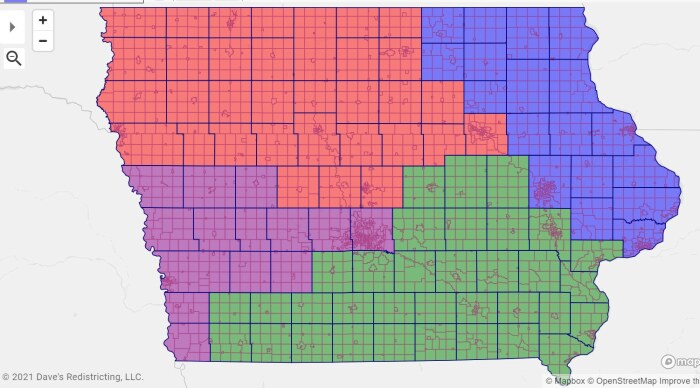 Last week, the U.S. Census Bureau announced some exciting news: they will release the next round of redistricting data this Thursday, August 12, four days earlier than promised.

At long last, Iowa will have the population counts needed to start drawing new district lines – and just in time, considering that the Iowa Constitution requires the legislature to finish redistricting by September 15.

There are 34 days between August 12 and September 15, and if everything goes right, it seems possible for the legislature to complete their work in that time frame.

As Laura Belin reported for Bleeding Heartland in April, it will take five business days (seven calendar days) for the new data to show up in the LSA’s mapping software, leaving 27 calendar days for the redistricting process proper. To review, the key steps of that process are:

How could all four steps happen in under a month? LSA has powerful enough software to draw good maps in a couple weeks, the public hearings could take place over a weekend, and the legislature only needs a couple of days to debate and vote on the proposal.

However, this process could go off-track in many ways, any one of which would delay final approval until after September 15. For one thing, TRAC still hasn’t elected a fifth member and hasn’t even met since March, so holding public hearings may take longer than expected.

This timeline also only works if the legislature approves the first set of proposed maps. If they vote down the first proposal, it seems unlikely the LSA could produce a second plan in time to meet the deadline. (Editor's note from Laura Belin: My sources close to the legislature do not expect the Iowa House and Senate to be called back to vote on a new map before September 15.)

If, for these reasons or any other, maps still haven’t been approved by September 15, then Article III, Section 35 of the Iowa Constitution gives the Iowa Supreme Court the authority to take over the process:

However, I think both legislative and Congressional redistricting will remain in the hands of the legislature, even if the process extends beyond September 15. That's how I read the ambiguous statement the Supreme Court released in April about how they intend to apply Article III, Section 35. The key paragraph:

If the general assembly is not able to meet the constitutional deadline, the supreme court tentatively plans to meet its constitutional responsibility by implementing a process which permits, to the extent possible, the redistricting framework presently set forth in Iowa Code chapter 42 to proceed after September 15. Under such a process, the supreme court would “cause the state to be apportioned into senatorial and representative districts to comply with the requirements of the constitution prior to December 31.”

Chapter 42 of Iowa Code defines the traditional Iowa redistricting process (LSA draws maps, TRAC hosts public hearings, legislature votes on up to three proposals). So as I read it, the Supreme Court justices are saying they intend to ignore the September 15 deadline, as long as the key players in the redistricting process (LSA, TRAC, legislature, and governor) are making a good faith effort to follow the usual process.

This interpretation also makes sense because it allows the court to stay out of the thorny business of drawing districts. Rather than exercise their constitutional authority to take over the process, they can sit on the sidelines and claim they were impartial.

Here’s an example of how that situation could come about:

Even though this scenario would result in gerrymandered maps, the Supreme Court may determine that it is the Chapter 42 process working as intended, albeit on a longer timeline due to census delays.

So what sort of maps might Republicans push for, if they are able to amend the LSA’s third proposal?

On the legislative front, they don’t have to do much, if any, work to make the maps favorable to their House and Senate majorities. Contrary to what some Democrats argued in the Des Moines Register last week, redistricting alone will not give Democrats a path to legislative majorities. No matter how you draw the maps, Iowa is still too rural to depend solely on urban and suburban voters. As I demonstrated back in March, the only realistic path to majorities is for Democrats to start doing better in small cities and rural areas again.

Even though Republicans should feel comfortable that new legislative maps will still favor them, they could amend third round legislative maps to lock in that advantage even further — most easily by “cracking” big cities so their Democratic votes are outweighed by surrounding rural areas. As I showed in March, “if the Republicans manage to manipulate the process enough, and the worst-case scenario comes to pass, urban and suburban areas could actually lose representation, despite growing much faster than the state as a whole over the last decade.”

On the Congressional front, I think the GOP will try to maintain the status quo, for two reasons. First, the current map is pretty favorable to them; in 2020 they proved they are able to win three of the current four districts, at least when Trump is on the ballot. And second, keeping roughly the same districts maximizes the value of incumbency. (Marianette Miller-Meeks has better name recognition in the current district than in one that includes Des Moines, for example.)

If I were GOP leadership, the key problem with the current map is a lot of Republican votes are wasted in the fourth district that could be more effective elsewhere. So if I were them, I would push for a map like this one: 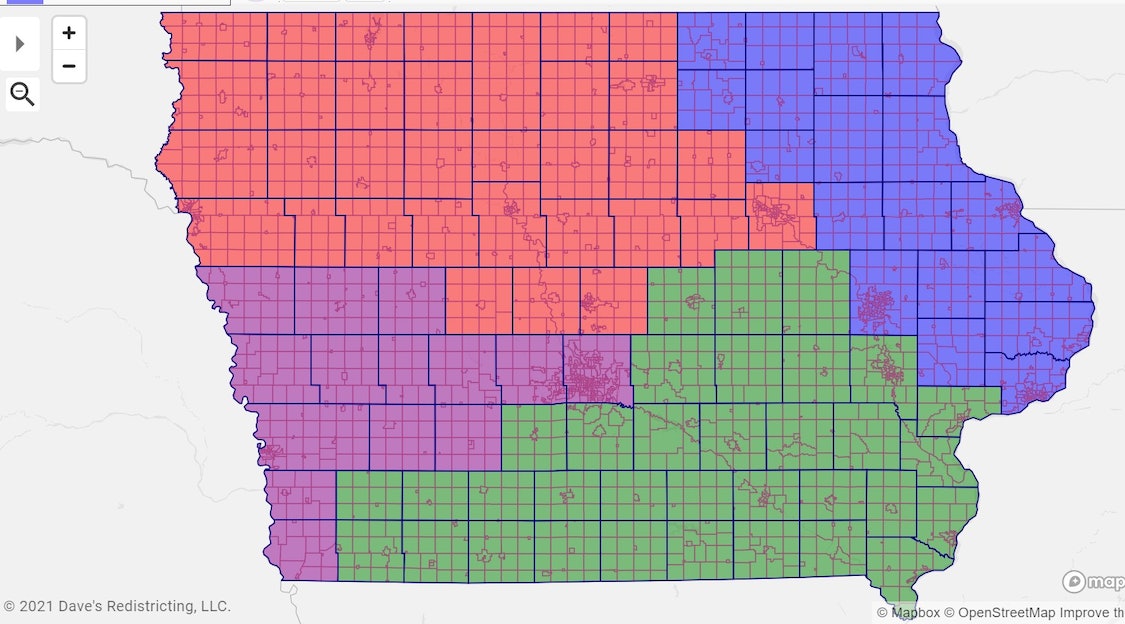 Including Waterloo in the fourth district makes it bluer but still safe for Republicans, and the other three districts more red. That statewide map also scores decently well on Iowa's two measures of compactness (perimeter and length-width).

As you can see, Republicans have easy ways to amend both the legislative and Congressional maps to give themselves advantages. And taking advantage of the Chapter 42 ability to amend third-round maps is exactly the sort of procedural trickery that they excel at. To defend against such a move, Democrats would have to convince the public to care enough about esoteric topics like “length-width compactness” and “percent variance from ideal district population” that Republican meddling becomes politically toxic.

That’s why anyone who cares about politics in Iowa should closely follow the redistricting process as it heats up with the release of census numbers. We need to be prepared to argue for good maps in the court of public opinion, so we aren’t caught flat-footed if Republicans pursue a strategy of amending third-round maps.

To this end, I will be publishing my analysis of the census data here on Bleeding Heartland shortly after it's released on August 12. Although we can't predict exactly what map the LSA will produce, the census data will allow us to narrow the range of possibilities further than we already have.

Thanks to the power of modern mapping software, everyday Iowans will be able to analyze all proposed maps -- whether from the LSA, legislative Republicans, or anyone else -- with more ease than ever. It's especially important to exercise that ability if you think, as I do, that backdoor gerrymandering is a real possibility in the coming months.

Evan Burger is a longtime political organizer who lives in Slater. He was the Iowa caucus director for Bernie Sanders’ 2020 campaign, and is now a partner at the progressive consulting firm Hegemony Strategies.