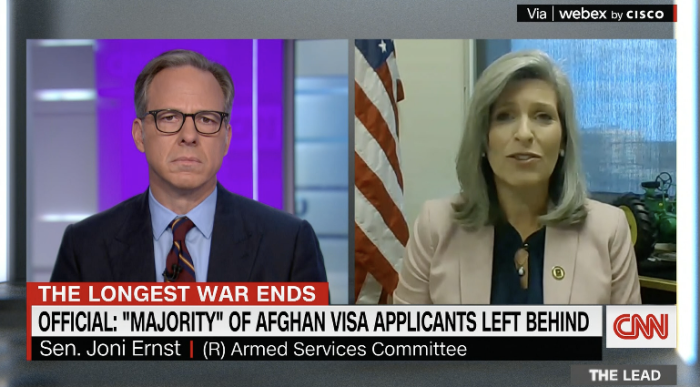 U.S. Senator Joni Ernst became fodder for fact-checkers last week when she wrongly said of President Joe Biden, “Not once has he expressed empathy and gratitude to the men and women who have put the uniform on and have fought so bravely overseas the last 20 years to keep our homeland safe. And I feel that by not acknowledging his gratitude for them, he’s diminishing their service.”

Before demolishing Ernst’s claim as “plain false,” CNN’s Daniel Dale pointed out that Ernst had pushed the same talking point on Fox News in August, “saying Biden has ‘yet to fully, fully thank the men and women that have served in the global war on terrorism” and declaring that ‘Joe Biden is a disgrace not to thank these men and women that have protected us.'” Dale found six examples of Biden publicly expressing his gratitude to military service members just in the past five months.

As shameful as it is for Iowa’s junior senator to lie repeatedly about the president, another part of Ernst’s short September 1 interview with CNN’s Jake Tapper was arguably more dangerous.

And in his speech the other day, he [President Biden] was very defensive, and basically stated we should have been out of Afghanistan ten years ago. And by saying that, what does that say to those veterans who have served in the last ten years in Afghanistan? That their sacrifice wasn’t worth it? I think it was.

So I do hope that President Biden stands up, stands forward, and tells those veterans thank you from the bottom of our heart. […]

Ernst never had a problem with Donald Trump stating on many occasions that the U.S. should have pulled out of Afghanistan long before now. (Last week, Trump told a Fox Business anchor, “We should have hit that country years ago and hit them really hard […] And then let it rot. We should have never done what we did.”)

But let’s set aside this latest example of Ernst’s double standards regarding the former president. I’m more troubled by what the senator implied: the commander in chief should censor his comments about military missteps.

After watching the government we propped up for many years collapse within days, those who served in Afghanistan or lost loved ones there might feel devastated. They might question whether their sacrifices accomplished anything. I can’t imagine how difficult that would be to process.

But those considerations shouldn’t put foreign policy debates off limits. Biden’s well-considered opinion is that we stayed in Afghanistan too long and that it wasn’t in our national interest to try “to remake a country through the endless military deployments of U.S. forces.” Some who served in that war zone agree.

To say so out loud does not denigrate anyone’s service or diminish their sacrifice.