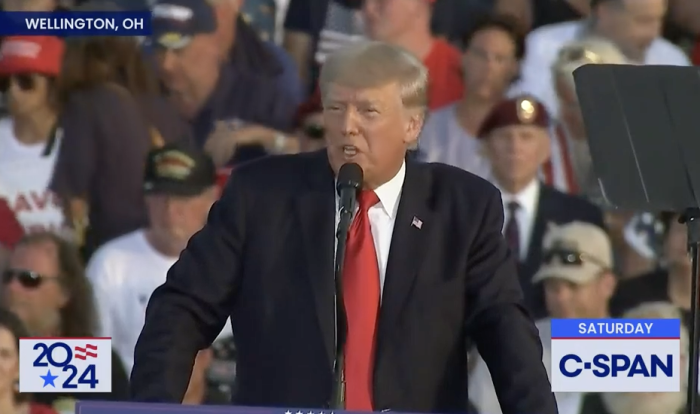 As the Taliban took full control of Afghanistan in recent days, every Iowa Republican in Congress condemned President Joe Biden's decision to pull out the last remaining U.S. military personnel.

None acknowledged that former President Donald Trump committed to a complete withdrawal of U.S. troops when his administration signed a deal with Mullah Abdul Ghani Baradar, a co-founder of the Taliban, in February 2020. In fact, Baradar--the next leader of Afghanistan--was released from a jail in Pakistan in 2018 "at the request of the Trump administration as part of their ongoing negotiations with the Taliban in Qatar, on the understanding that he could help broker peace."

In a televised address on August 16, Biden stood by his decision to withdraw troops. You can read the full transcript here. Excerpts:

We went to Afghanistan almost 20 years ago with clear goals: get those who attacked us on Sept. 11, 2001, and make sure Al Qaeda could not use Afghanistan as a base from which to attack us again. We did that. We severely degraded Al Qaeda in Afghanistan. We never gave up the hunt for Osama bin Laden and we got him.

I’ve argued for many years that our mission should be narrowly focused on counterterrorism, not counterinsurgency or nation-building. That’s why I opposed the surge when it was proposed in 2009 when I was vice president. And that’s why as president I’m adamant we focus on the threats we face today, in 2021, not yesterday’s threats. [...]

When I came into office, I inherited a deal that President Trump negotiated with the Taliban. Under his agreement, U.S. forces would be out of Afghanistan by May 1, 2021, just a little over three months after I took office. U.S. forces had already drawn down during the Trump administration from roughly 15,500 American forces to 2,500 troops in country. And the Taliban was at its strongest militarily since 2001.

On the day that deal was signed in February 2020, Trump told reporters, “Everybody’s tired of war." Secretary of State Mike Pompeo, who witnessed the signing, "said the deal was based on the reality that the conflict was militarily unwinnable without a massive deployment of additional U.S. forces," Tom Vanden Brook and Deirdre Shesgreen reported for USA Today.

Trump bragged about bringing troops home from Afghanistan as recently as June 26 of this year, during a speech to supporters in Ohio.

Reasonable minds can disagree about whether the U.S. should have followed through with Trump's deal or sent thousands more troops to Afghanistan to continue fighting the Taliban. I think we should have left long ago. As Charles Pierce observed: "Almost everything you’re reading on this topic in elite publications is an effort by somebody somewhere to duck out of their responsibility for 20 years of fantasy and illusion and outright lies. Craig Whitlock of the Washington Post called all of them out when he printed the so-called 'Afghanistan Papers.'"

Will Bunch stated "the obvious bigger picture": "a government that collapses in days without America propping them up wasn't worth $2.2 trillion and thousands of U.S. lives."

According to the Iowa Department of Veterans Affairs, at least 31 military service members from Iowa died in Afghanistan during the past two decades. My heart goes out to their loved ones, as well as to veterans who served in the region and wonder what all of their sacrifices accomplished. Iowa Public Radio has been interviewing some who were deployed in Afghanistan, and their stories are worth hearing. Veterans needing support can call the crisis line at 800-273-8255, or visit YourLifeIowa.org online, call (855) 581-8111, or text (855) 895-8398.

The buck stops with Biden on how the withdrawal was managed. We should have gotten more U.S. allies out sooner, and Jason Kander (who served in Afghanistan in the 2000s) discussed that misstep here.

The fact remains: Trump committed to pulling all U.S. troops out of the country we'd occupied for 20 years. I have yet to see any Iowa Republican elected official acknowledge that reality.

I searched the archives of news releases from Senators Joni Ernst and Chuck Grassley. Neither issued a statement in February or March 2020 on the deal signed with the Taliban. The only public comment I found was a tweet from Ernst saying the agreement was "a sign of progress" and "a step toward being able to bring our troops home." 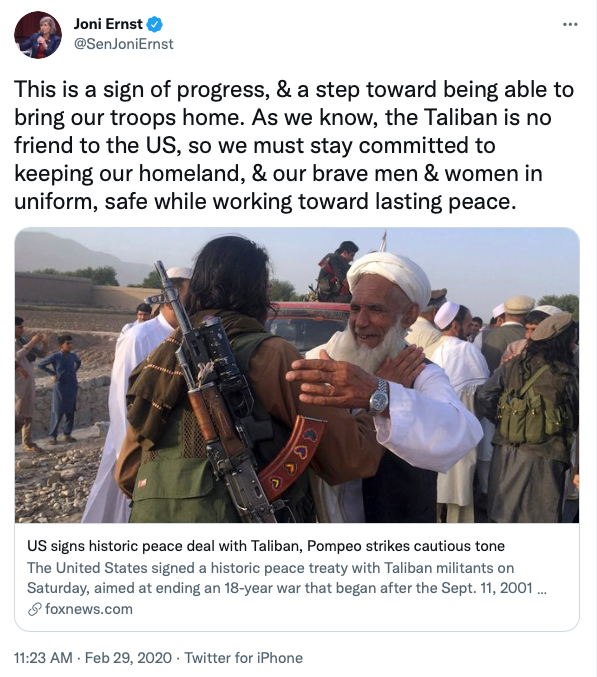 You'd never guess from Ernst's recent public comments that Trump played any role in the pullout. From an editorial published by Fox News in early July:

When an American president makes a decision on military deployment, the action sends signals to friends and foes alike around the globe.

Take for example President Joe Biden’s decision to withdraw the U.S. military presence in Afghanistan by September 11, 2021. Not only was this hasty and misguided, disregarding conditions on the ground, it was also a political message calculated for a front page or primetime talking point on the 20 year anniversary of the 9/11 attacks.

Ernst didn't mention that under Trump's deal, all troops would have been gone by May 1.

The senator declared in a July 14 news release, "From the beginning, President Biden’s decision to haphazardly withdraw from Afghanistan by September 11, 2021, with no real plan of how to do so, was not a sound foreign policy move; it was a clear, callous political message."

Following Biden's televised address on August 16, Ernst asserted that the mess in Afghanistan was "entirely avoidable."

After days of avoiding the press and the American people, President Biden’s bad faith spin of his catastrophic exit and gross mishandling of the deteriorating situation in Afghanistan is insulting. The Taliban takeover in Afghanistan is shameful, a sincere tragedy, and a complete leadership failure by this president—and it was all entirely avoidable,” said Senator Joni Ernst. “This mishandled and haphazard withdrawal executed by this president caused so much of the collapse and panic we are witnessing now and is an international embarrassment and a black-eye for our country that will put more Americans and allies in harms’ way while emboldening our adversaries.

Senator Chuck Grassley didn't put out a news release this week on Biden's policy, but tweeted that the scenes in Kabul recalled images from Saigon in 1975 of "American allies clinging desperately to US aircraft to escape after our government broke promise to protect them." Speaking in Grundy Center, he asserted that Biden had ignored warnings from the intelligence community.

Republicans who represent Iowa in the U.S. House ran with similar narratives. Representative Ashley Hinson claimed the tragedy was "avoidable," saying the "Biden Admin was reckless with U.S. lives, including our embassy personnel, Afghan lives & our national security." Mariannette Miller-Meeks tweeted, "The current situation in Afghanistan is a crisis that was completely avoidable and undermines our position with other allies." Randy Feenstra's take was the same: "President Biden's reckless withdrawal from Afghanistan could have dire consequences - both here at home & for our allies abroad. This will go down in history as a colossal failure of leadership by the Biden administration."

Iowa media with access to any of these GOP officials should ask how Biden could have avoided this outcome, given the timeline Trump committed to last year. Did Trump miscalculate when he agreed to release the new leader of Afghanistan from prison?

If Ernst and the others believe the U.S. should have stayed in Afghanistan indefinitely to keep the Taliban out of power, how many more troops would they commit to that mission, knowing the Taliban would have resumed attacks on our personnel after the May 2021 deadline passed?

An honest assessment would admit that Biden had no good options for how to handle the Taliban, and no president since George W. Bush is without blame for what's unfolding in Afghanistan now.

UPDATE: During an interview with Radio Iowa and Associated Press reporters on August 24, Grassley acknowledged, “Whatever Trump or Biden wanted to do on reducing the number of troops or pulling out, they should have never set a date." He expressed hope that Biden won't stick to an August 31 deadline, adding,

“It seems to me common sense would dictate…you’d do all that without letting the enemy know what you’re doing,” Grassley said. “…Any artificial deadline would lead to sure death for a lot of people that don’t deserve it.”