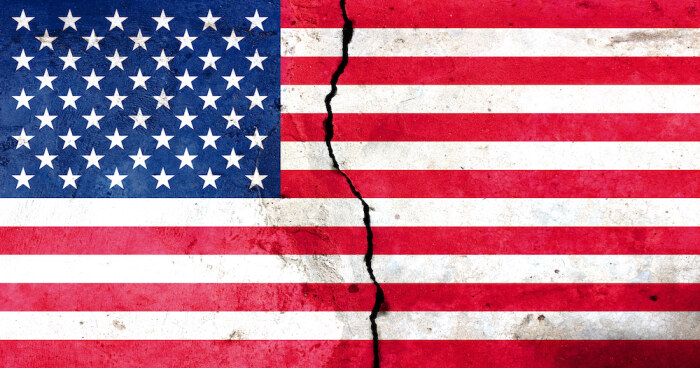 The Labor Day Weekend heralds the return of America’s favorite pastime — no, not hating our neighbor who may be vaxxed / unvaxxed or a Democrat / Republican or any sort of adherent to What Must Be Classified As Evil. No, that pastime is, of course, college football. It is a months-long occasion to don the colors of institutions of higher revenue — oops, make that “higher education” — you may never have attended and down a few beers with friends while rah-rah-ing for the hired mercenaries who probably aren’t from the state corresponding with the line on the scoreboard.

College football is unique because it embodies the true American ideal: rooting for your state against all other states.

State pride has been with us since the days of the Republic’s formation, but it seems today that more of us identify as Iowans, or Ohioans, or Californians than as Americans. Indeed, the fabric of e pluribus unum — out of many we formed one — seems to be tattering. Two hundred fifty years after thirteen colonies reluctantly united to dropkick the British colonizers across the pond, America is now a continental landscape of fifty siloed entities, hopelessly divided by religion, attitude, ethnicity and the resulting politics.

“America is still conflicted about its values, whether over the social contract, the means of educating its children, the right to bear or ban arms, the protection of its vast lands, lakes, and air, or the relationship between the states and the federal government,” Robin Wright wrote in The New Yorker on the eve of the 2020 election.

In that article, Colin Woodward, who penned the authoritative book Union: The Struggle to Forge the Story of United States Nationhood, told Wright: “The idea that America has a shared past going back into the colonial period is a myth. We are very different Americas, each with different origin stories and value sets, many of which are incompatible.”

As in all rocky relationships, sooner or later the participants need to acknowledge our incompatibility and consider an amicable separation.

Many observers of human behavior agree on signs indicating a relationship is over: winning becomes everything, one partner constantly provoking the other, physical stress rising with anticipated confrontation, needing to hide your true self, oversharing on social media, and “we” taking a backseat to “me.”

The thought of secession is not new; many Texans have wanted to go their own way for decades; such a bill was formally filed in the Texas state house last February. Also, it’s not news that two-thirds of Republicans in the old Confederacy favor secession. But the same poll found nearly 4 in 10 residents of Pacific Coast states wanting to go it alone, as well as 3 in 10 Mountain States residents, 3 in 10 Heartland residents and a third of Northeast residents. Those divisions just about correspond to Joel Garreau’s analysis of America thirty years ago, which he capsulized in his 1981 book The Nine Nations of North America.

“Despite the turbulence in technology, finance, energy, population, mobility and polity, the boundaries still make sense as drawn in 1981,” Garreau told The New York Times in 2014. He added that “what seems to really endure is [sic.] culture and values. They are slow to change, and far more so than I originally guessed. The layers of unifying flavor and substance that define these nations still explain the major storms through which our public affairs pass. And ‘Nine Nations’ is also a map of power, money and influence, the patterns of which have only deepened.”

And this was before the election of Donald Trump, the growing awareness of endodontic police violence against persons of color, and of course the pandemic, which has morphed what used to be common-sense public health policy into a civil cold war.

It’s been more than 150 years since the last fractured European realms of Italy and then Germany unified, and more than 30 years since Germany again came together after Soviet influence disintegrated. Since then, the trend has gone the other way: Czechoslovakia, which had existed since before World War I, abandoned its single state in 1993 and once again separated into Czech and Slovak countries. A year earlier, Yugoslavia bid adieu to its post-World War II amalgamation, disassociating into six countries. Beginning in 1988, the Soviet Union atom-smashed 14 different ways.

The myth-busting of national unity is not unique to Europe. Many are speculating whether India, a 74-year-old nation besieged by differences in ethnicity, religion, culture, language, and geography, is on the verge of dissolution. “This is a forbidden question we must ask,” Meghnad Desai, professor emeritus of economics at the London School of Economics and author of The Rediscovery of India, wrote in Quartz India. “[M]aintaining its integrity and unity has been the greatest achievement of India, and democracy has been the key. But never say never.”

The concept of self-determination, particularly along ethnic, religious, economic, and political lines, which infused a good deal of the impetus for national breakup late in the last century, is simmering in America. Like a virus, why would we be immune? And why should we resist?