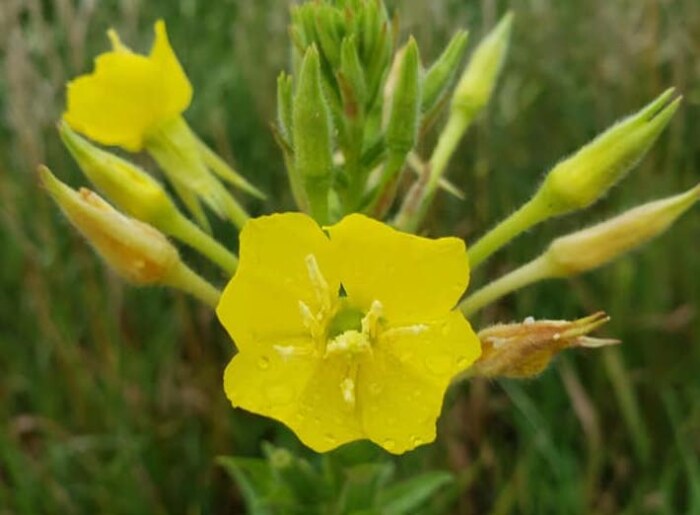 I have a soft spot for native plants that can thrive in some of the least hospitable environments. The natural range of common evening primrose (Oenothera biennis) covers most of North America east of the Rocky Mountains, and you're as likely to find it by roadsides or in vacant lots as near woodland edges, prairies, or streams. These plants typically start blooming in July, but you may see some flowers as late as October.

Sometimes known as weedy evening-primrose, German rampion, hog weed, King's cure-all, or fever-plant, common evening primrose has been used medicinally for hundreds of years. Its seeds are used to produce evening primrose oil, which many take for various health conditions. My midwife recommended that I take evening primrose oil toward the end of my first pregnancy to help ripen the cervix.

The roots and parts of the plants are edible as well, though I've never tried cooking them. I took most of the pictures enclosed below in Windsor Heights or Urbandale in early September.

As the scientific name ("biennis") suggests, common evening primrose is a biennial plant. I'm not good at identifying these in their first year, when the leaves form a rosette. This photograph by Raul654 comes from Wikimedia Commons. 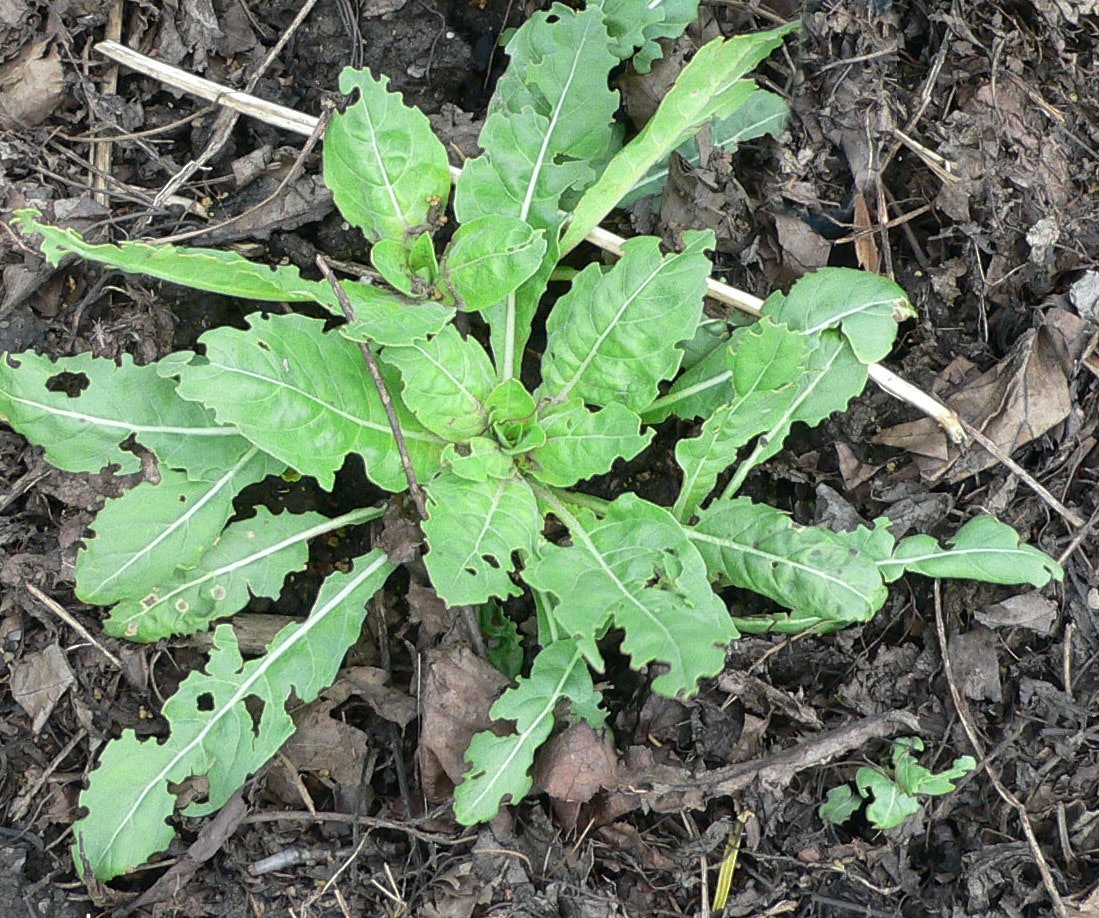 Illinois Wildflowers describes the foliage during the second year of the life cycle this way:

There is usually a central stem with alternate leaves, but sometimes there will be multiple stems in open areas, creating a bushy appearance. The stems are light green or red, and are covered with white hairs. The light or olive green leaves are up to 8" long and 2" wide, but usually smaller. They are lanceolate and resemble willow leaves.

This plant, growing near a shady woodland edge, has a green stem. 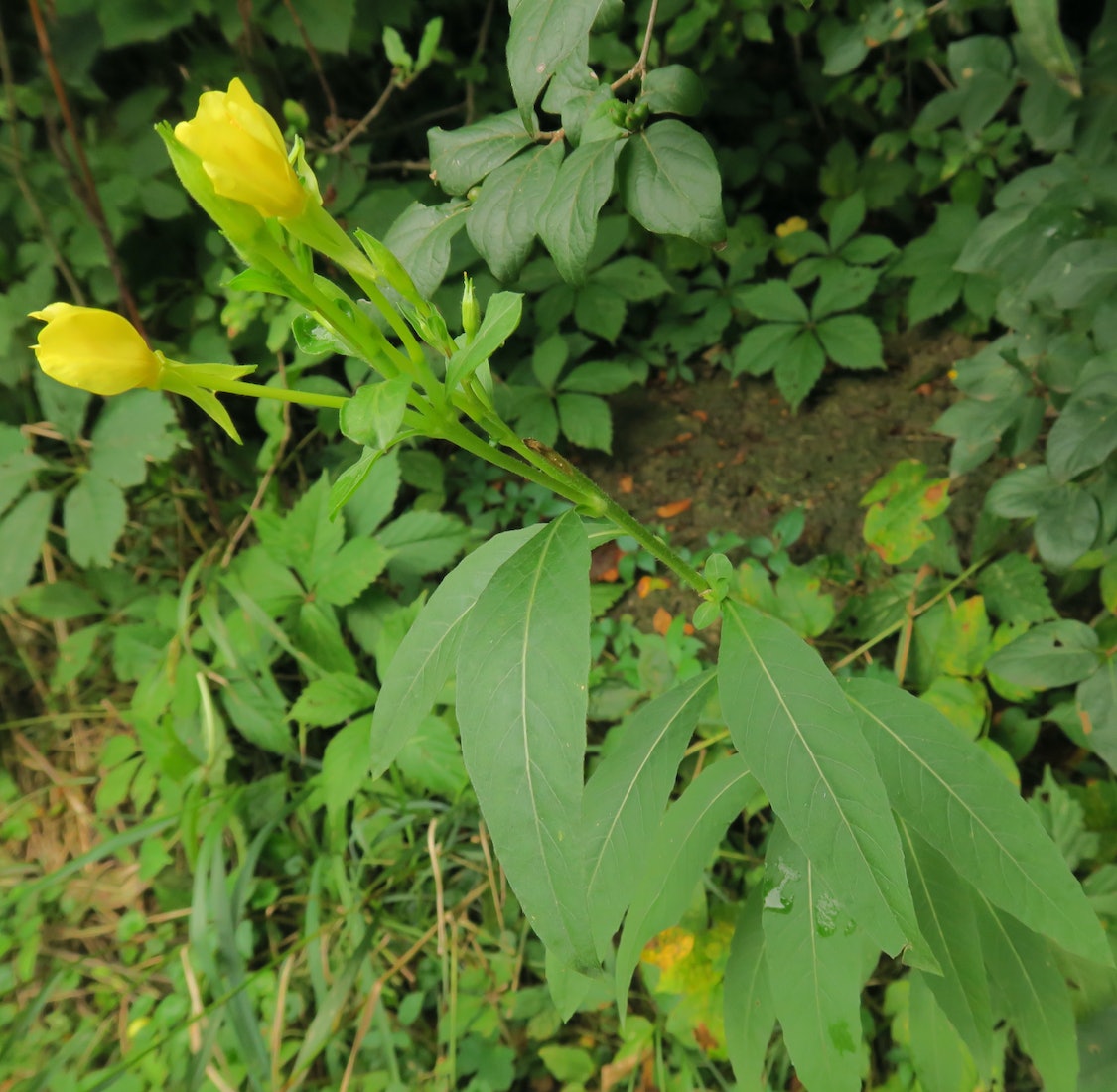 Here's a bushy-looking plant with red stems. I found it growing out of a crack in a Windsor Heights bridge a few years ago and captured the image on my phone. 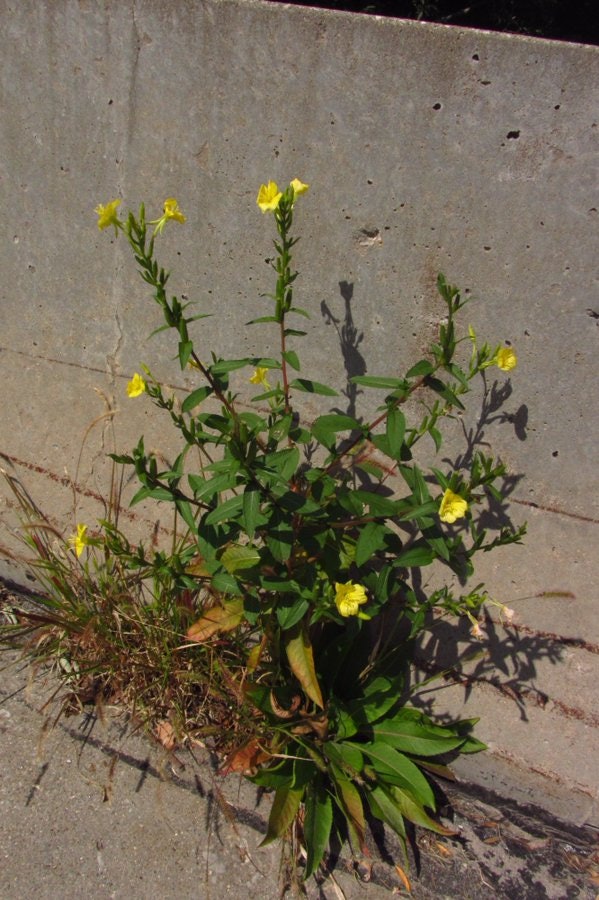 Minnesota Wildflowers writes that common evening primrose plants have a "Leafy spike of yellow flowers at the end of the stem, blooming from the bottom up, a few to several open at a time. Flowers are 1 to 2 inches across with 4 yellow heart-shaped petals and 8 yellow stamens surrounding a style with a cross-shaped stigma in the center."

Some flowers starting to open: 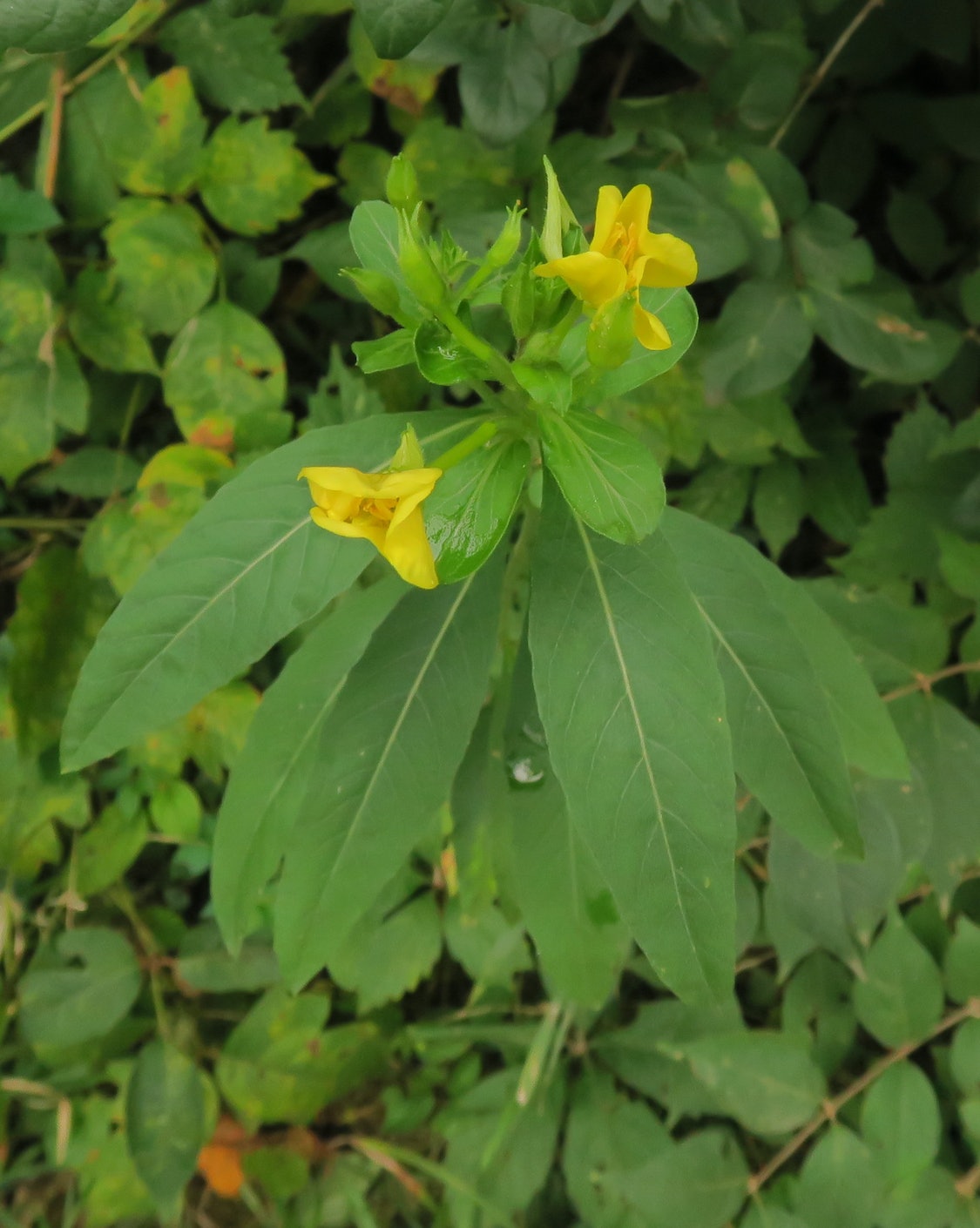 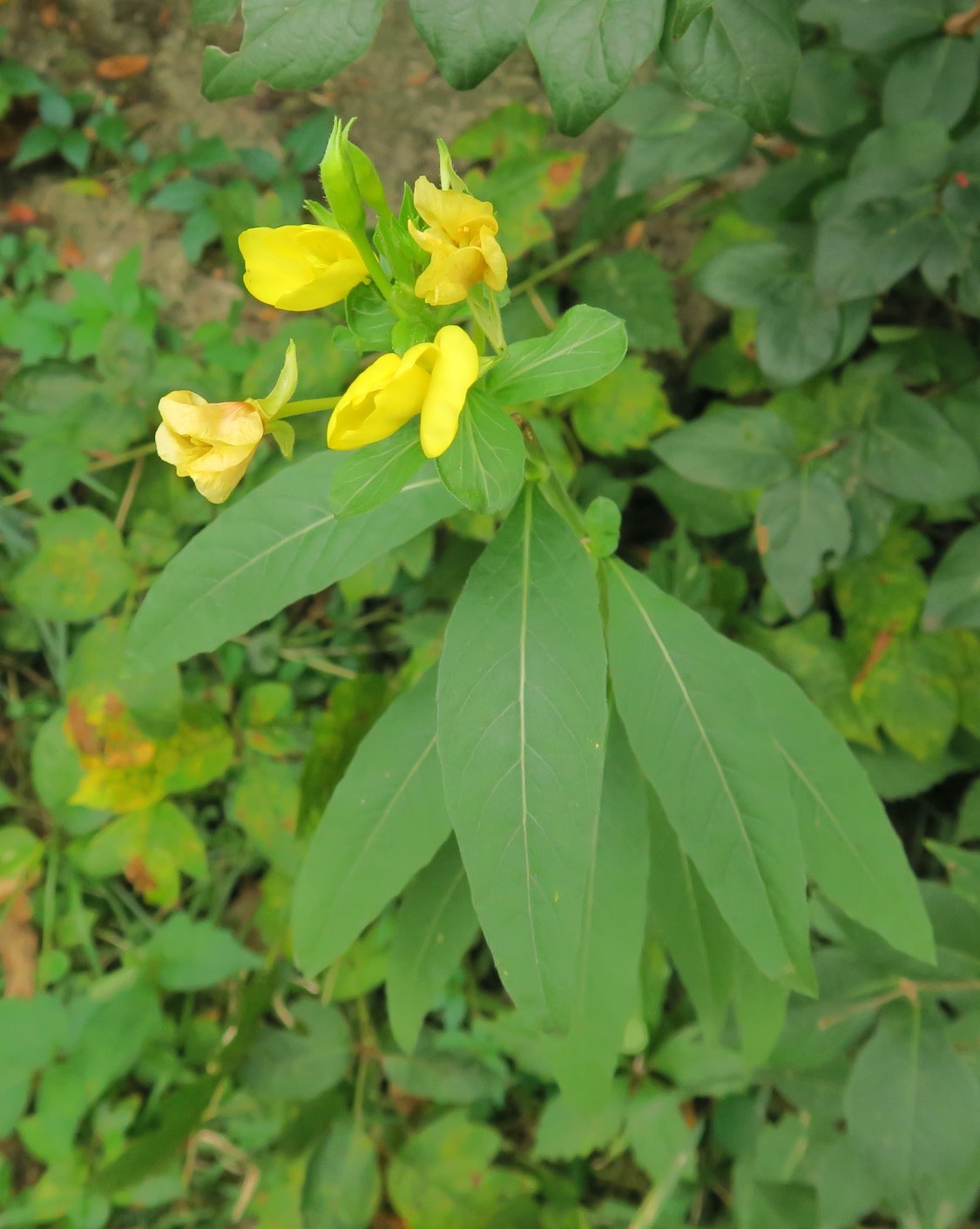 U.S. Wildflowers refers to a “crossed stigma typical of many evening primroses.” You can see that in this photograph Katie Byerly took in northeast Iowa: 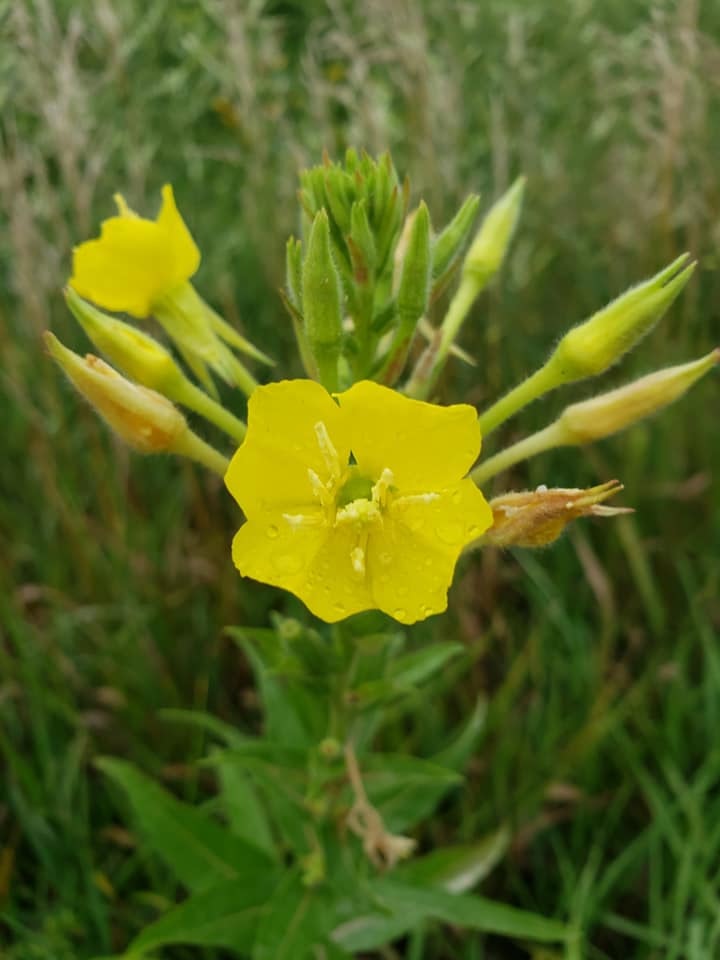 Common evening primrose has a long blooming period. You'll often see buds and new flowers on the same plant as flowers that are already losing their petals. 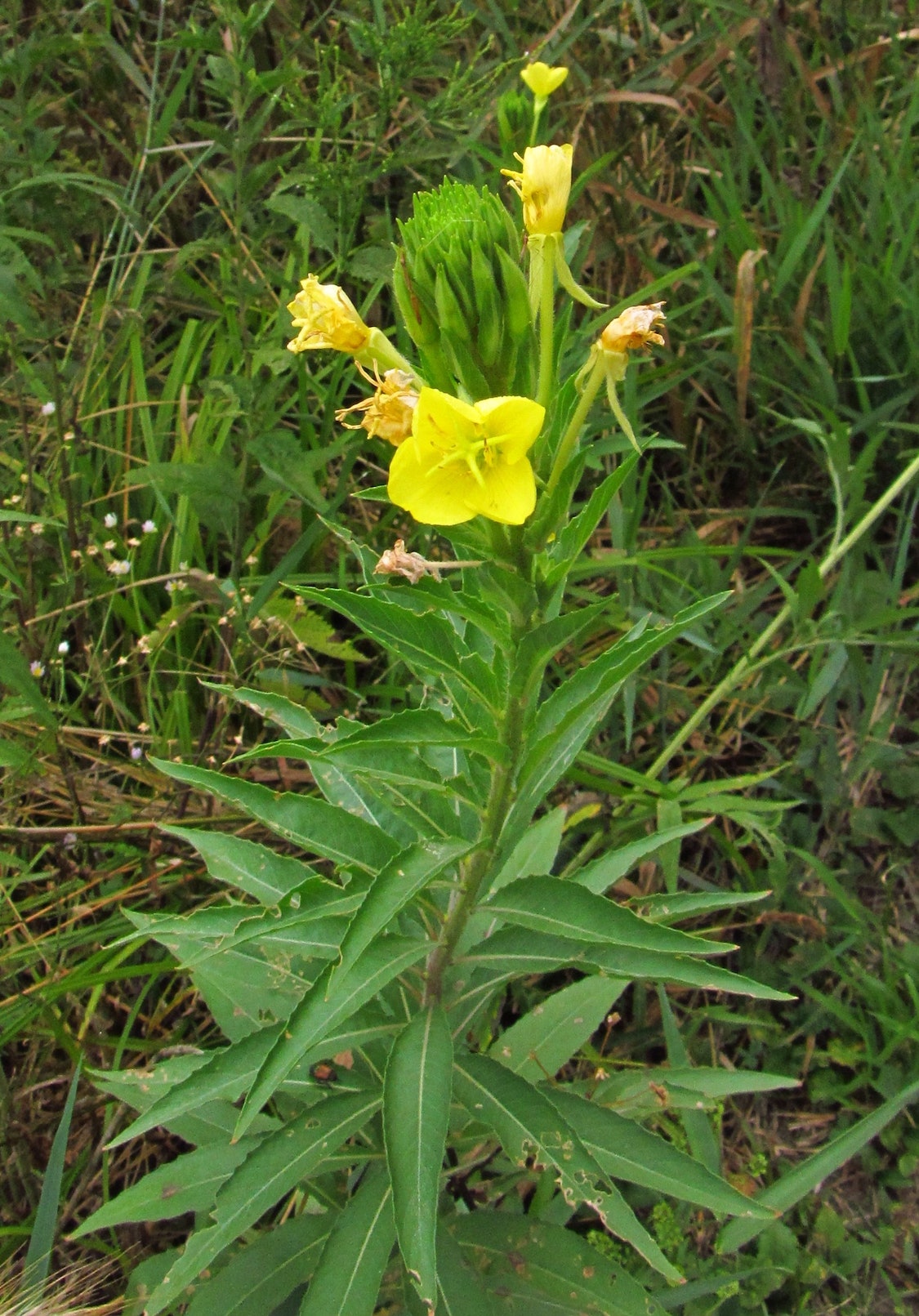 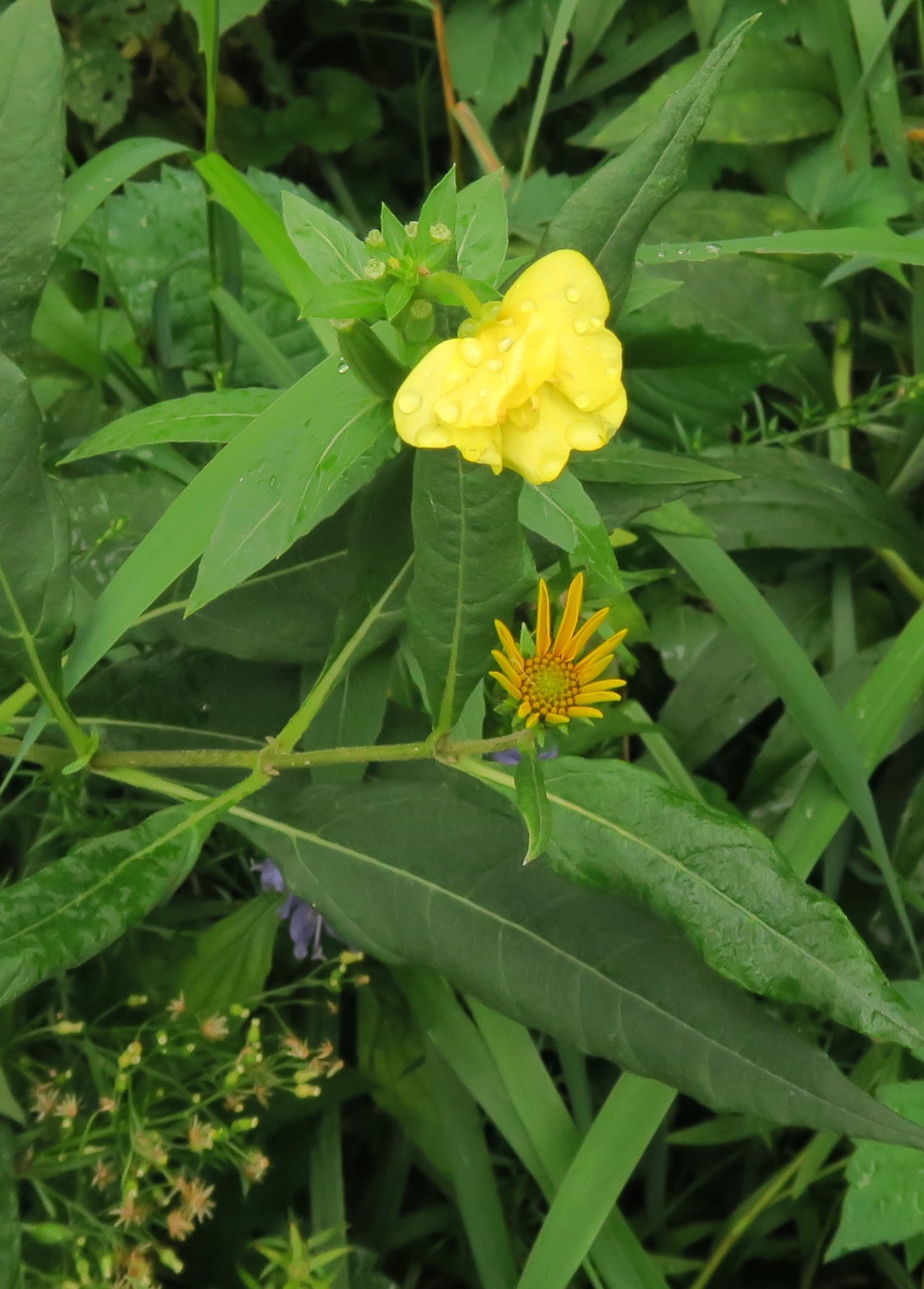 I went back to the same spot the next day and found the Jerusalem artichoke nearly in full bloom. The purple flowers hiding in the background are American bellflower. 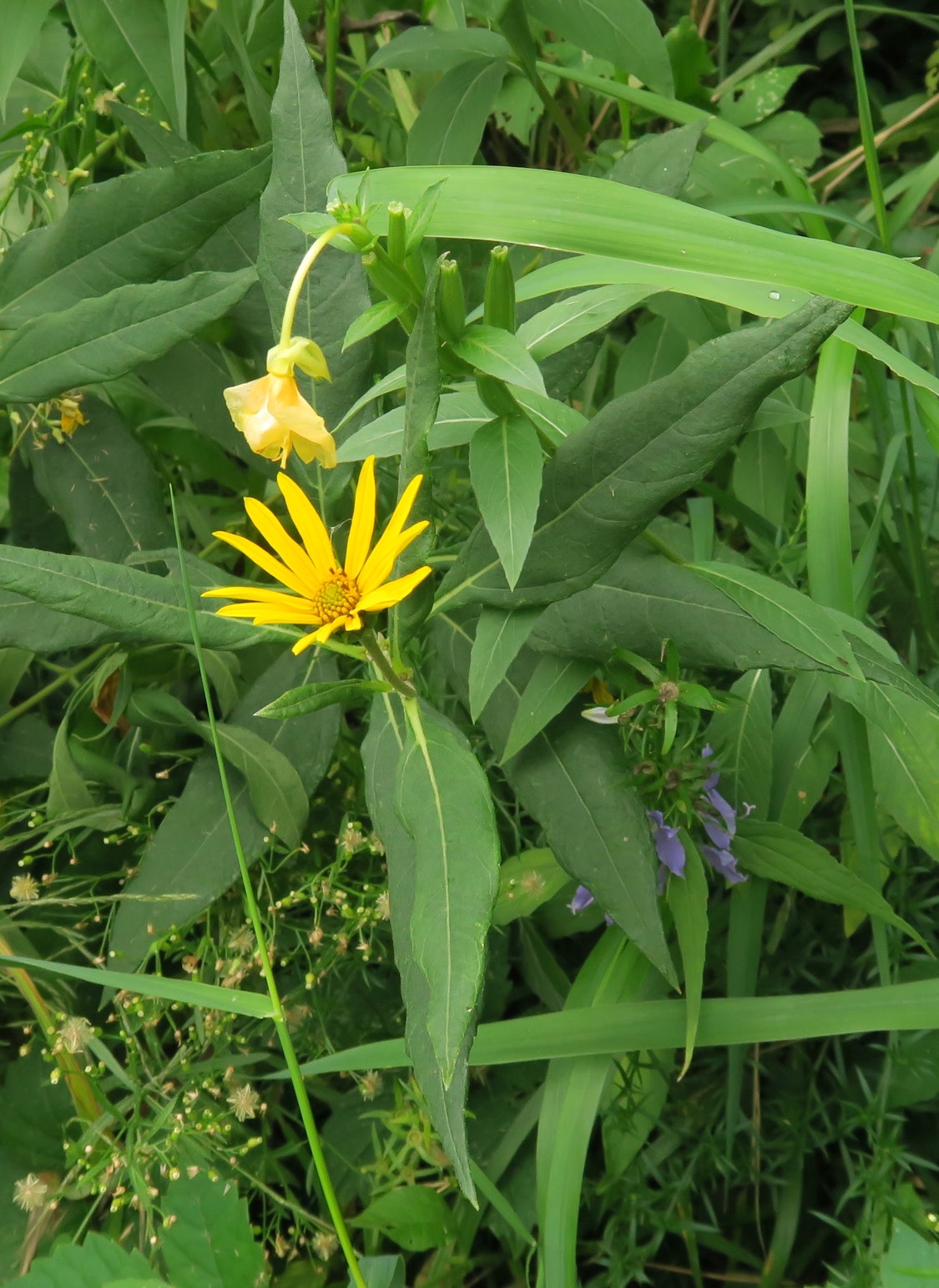 After the flowers fade, seed capsules form along the stem, and in a cluster near the top of plants. They start out green and eventually turn brown. 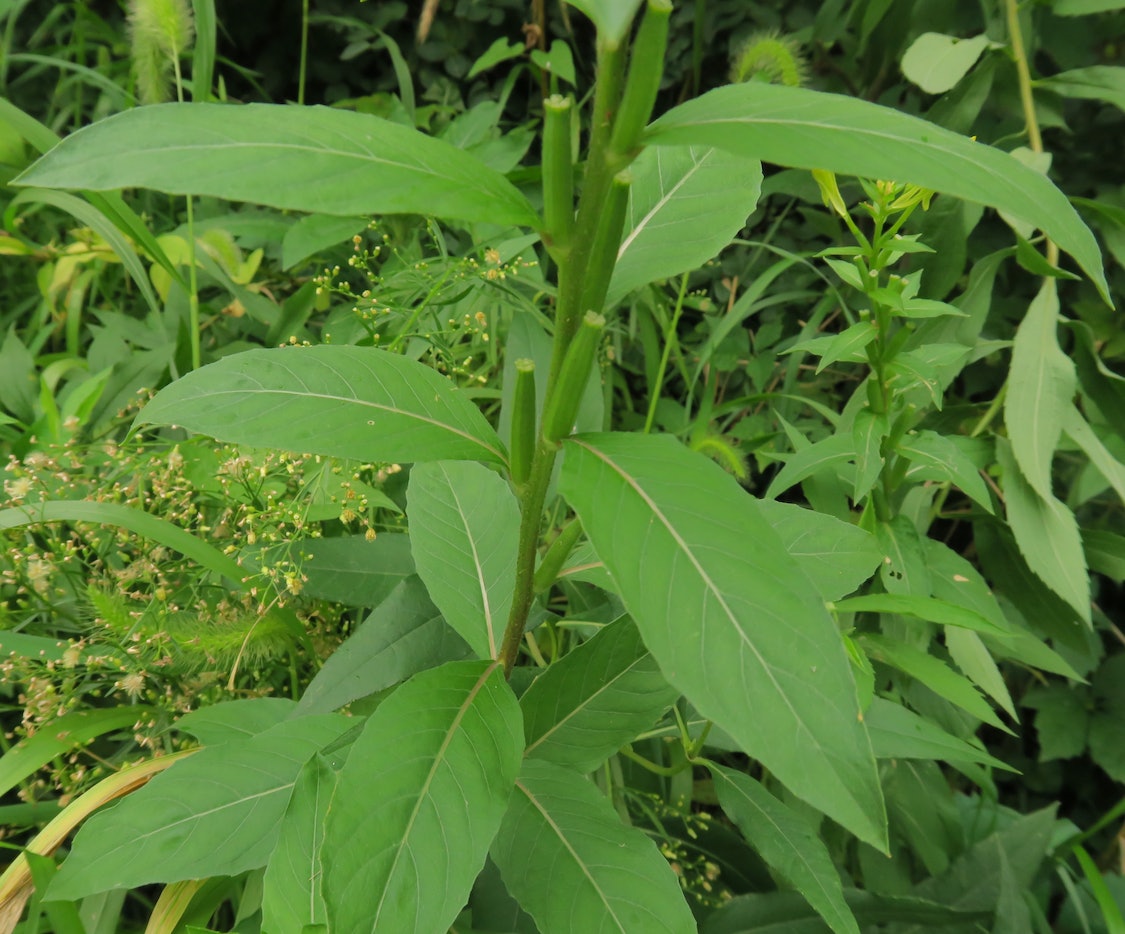 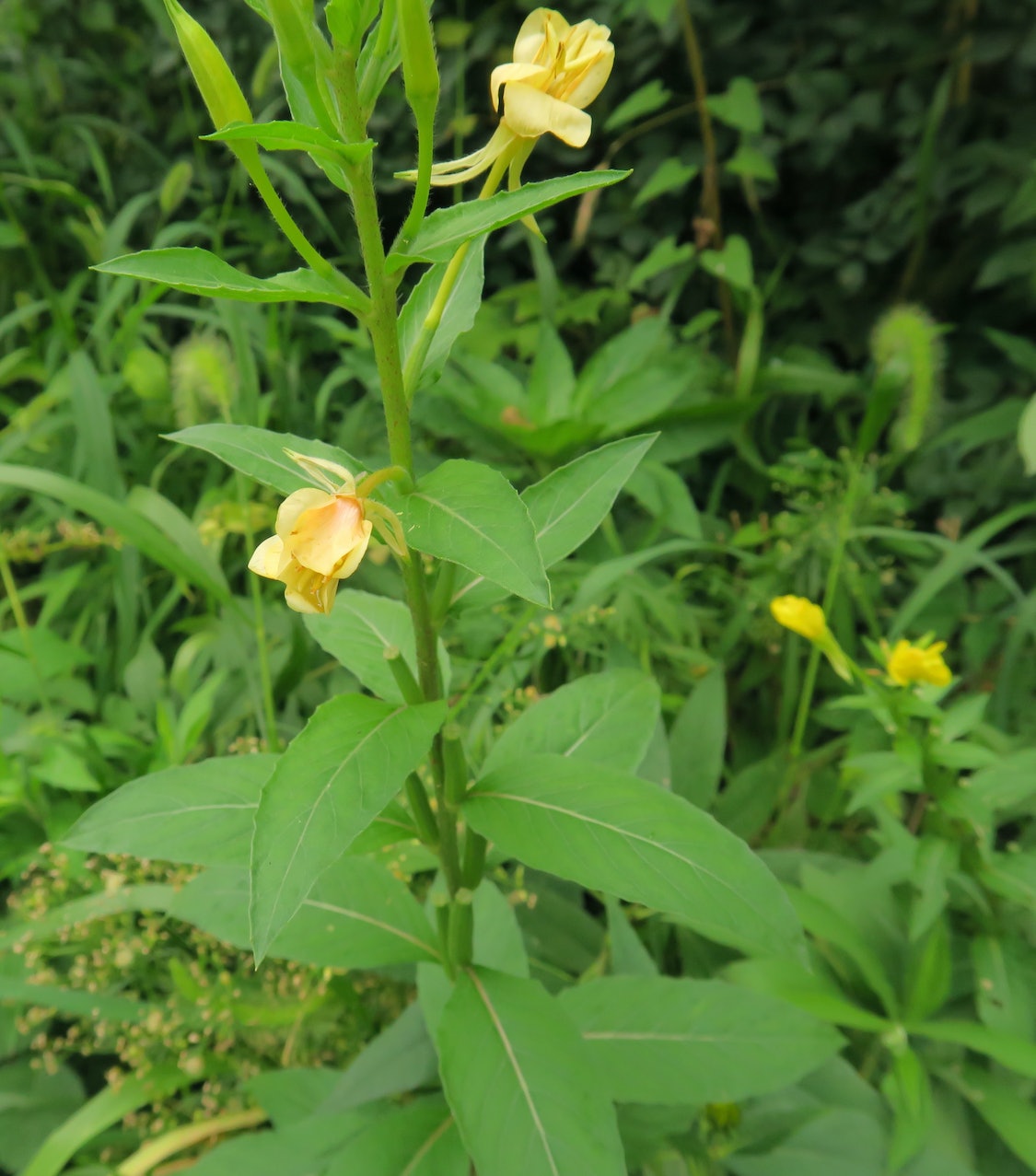 A common evening primrose colony is doing well in the parking lot of the former Kmart store in Urbandale, which closed three years ago. I took several pictures there because the seed capsules stand out against the pavement. 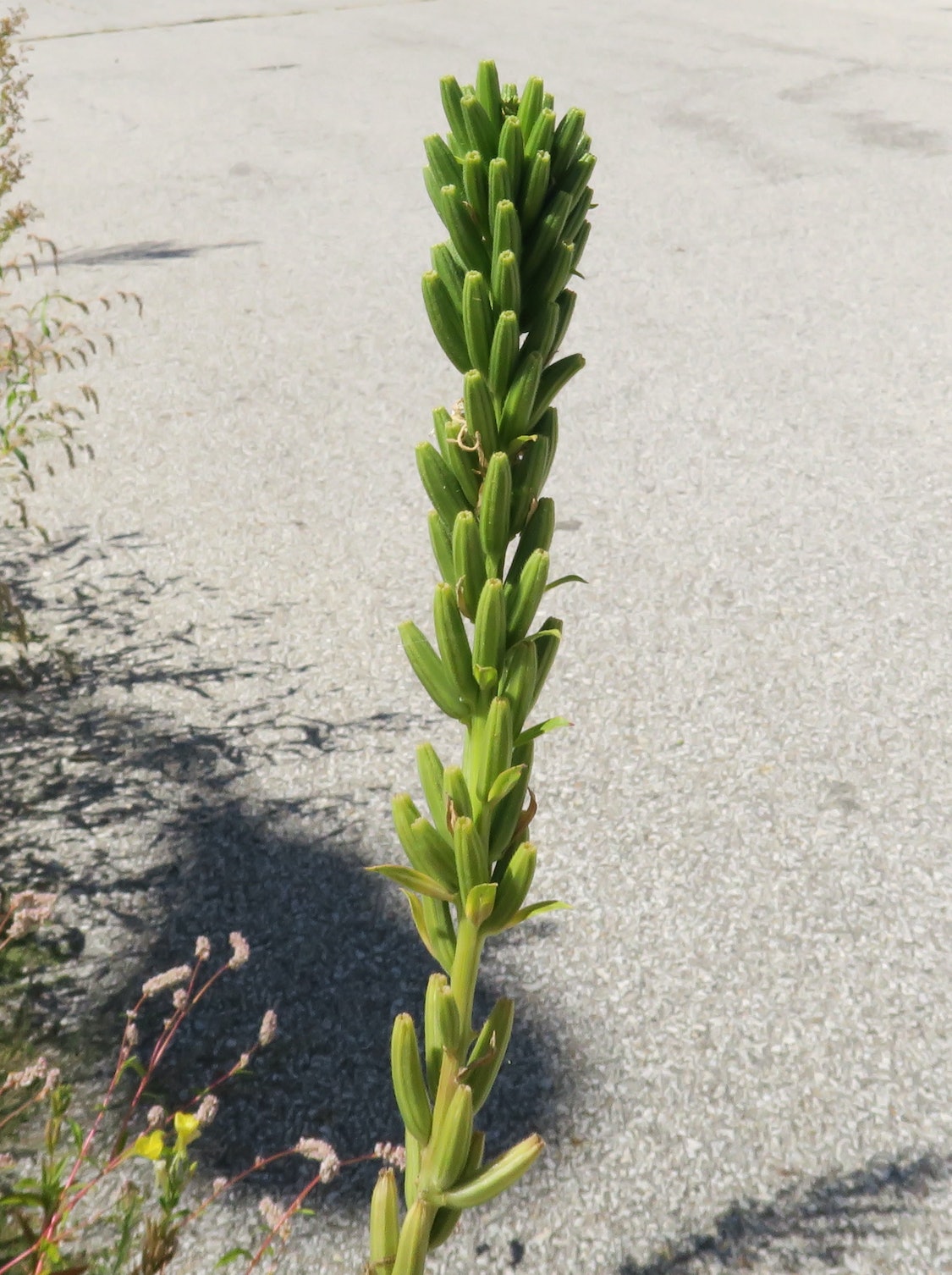 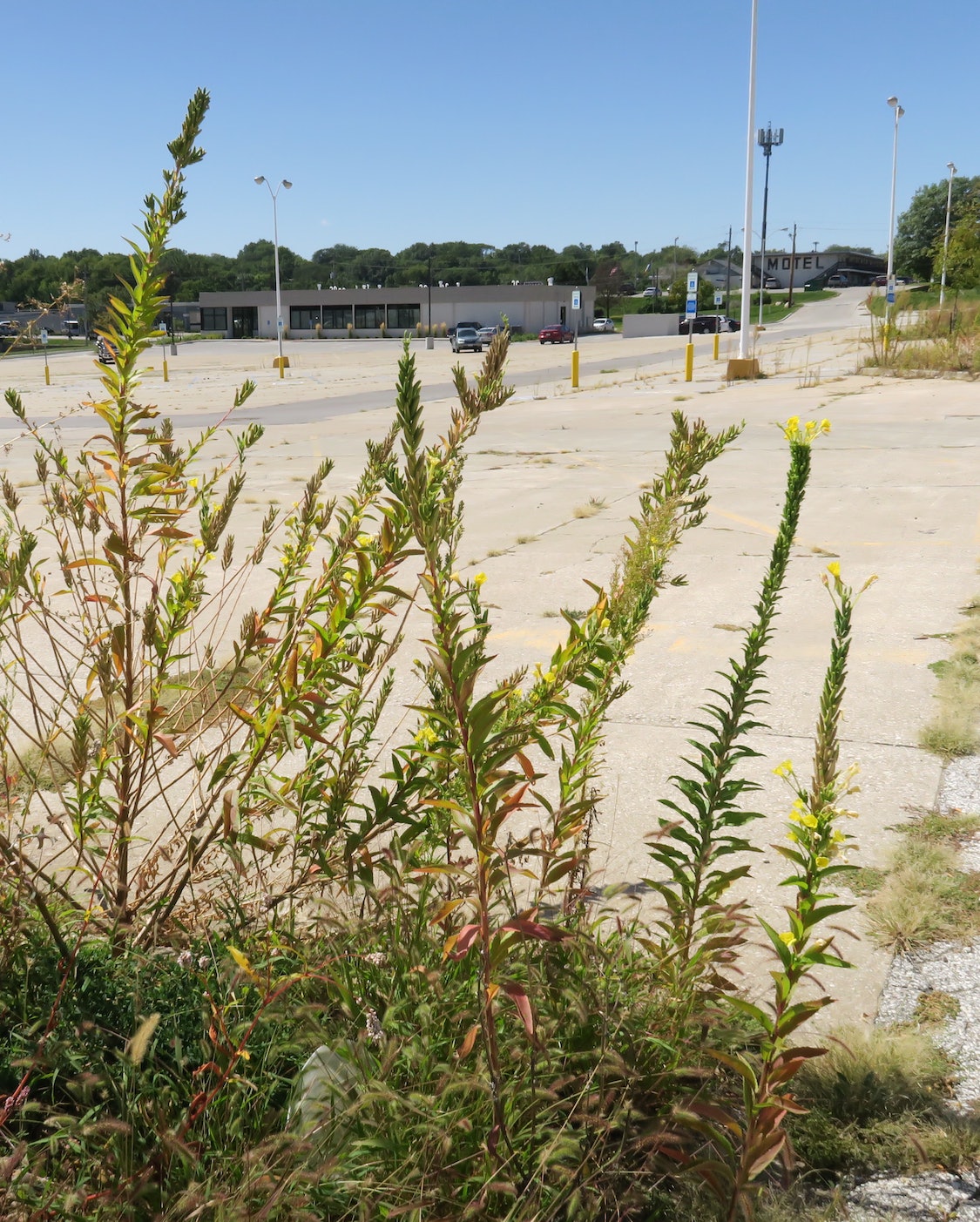 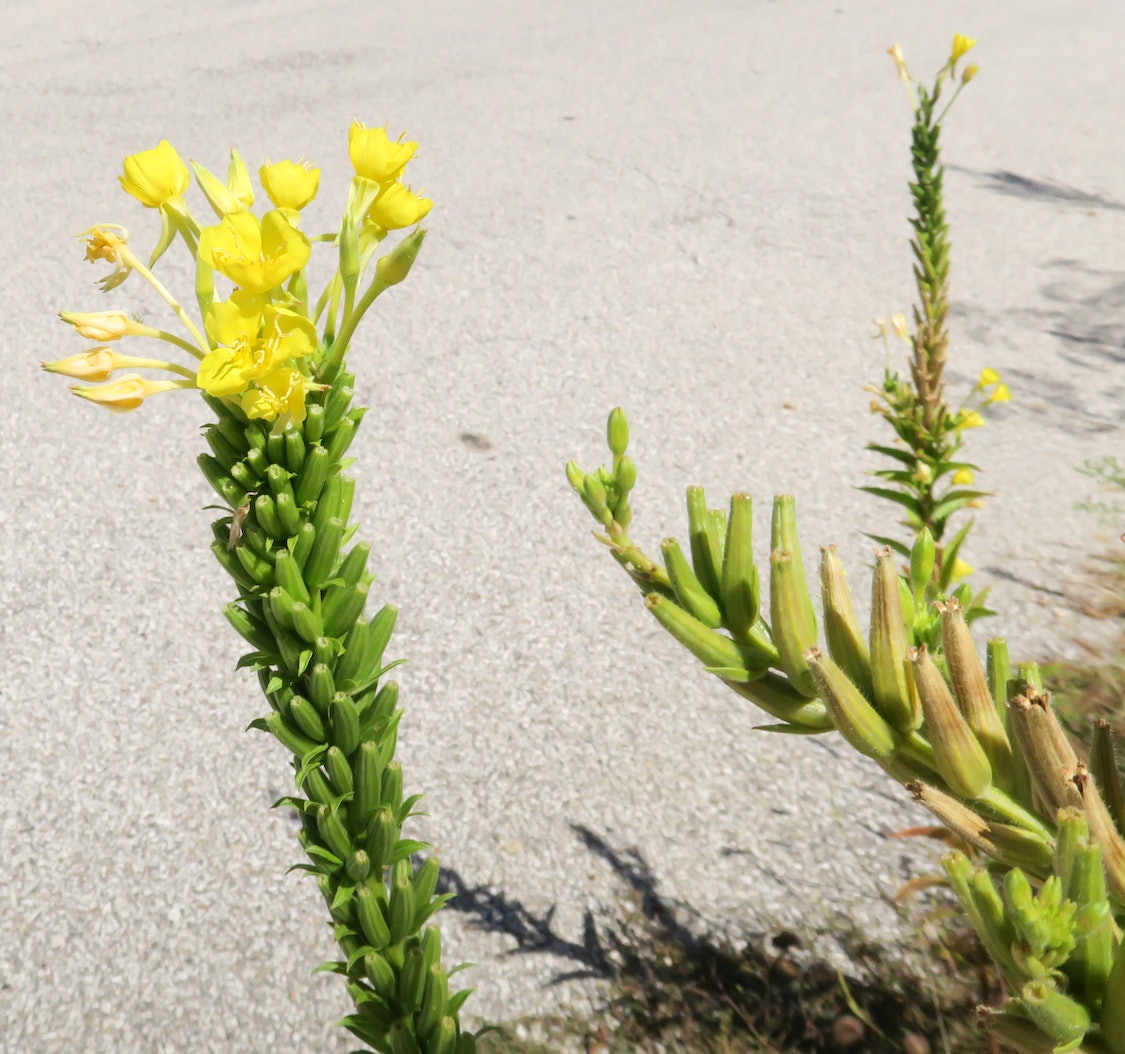 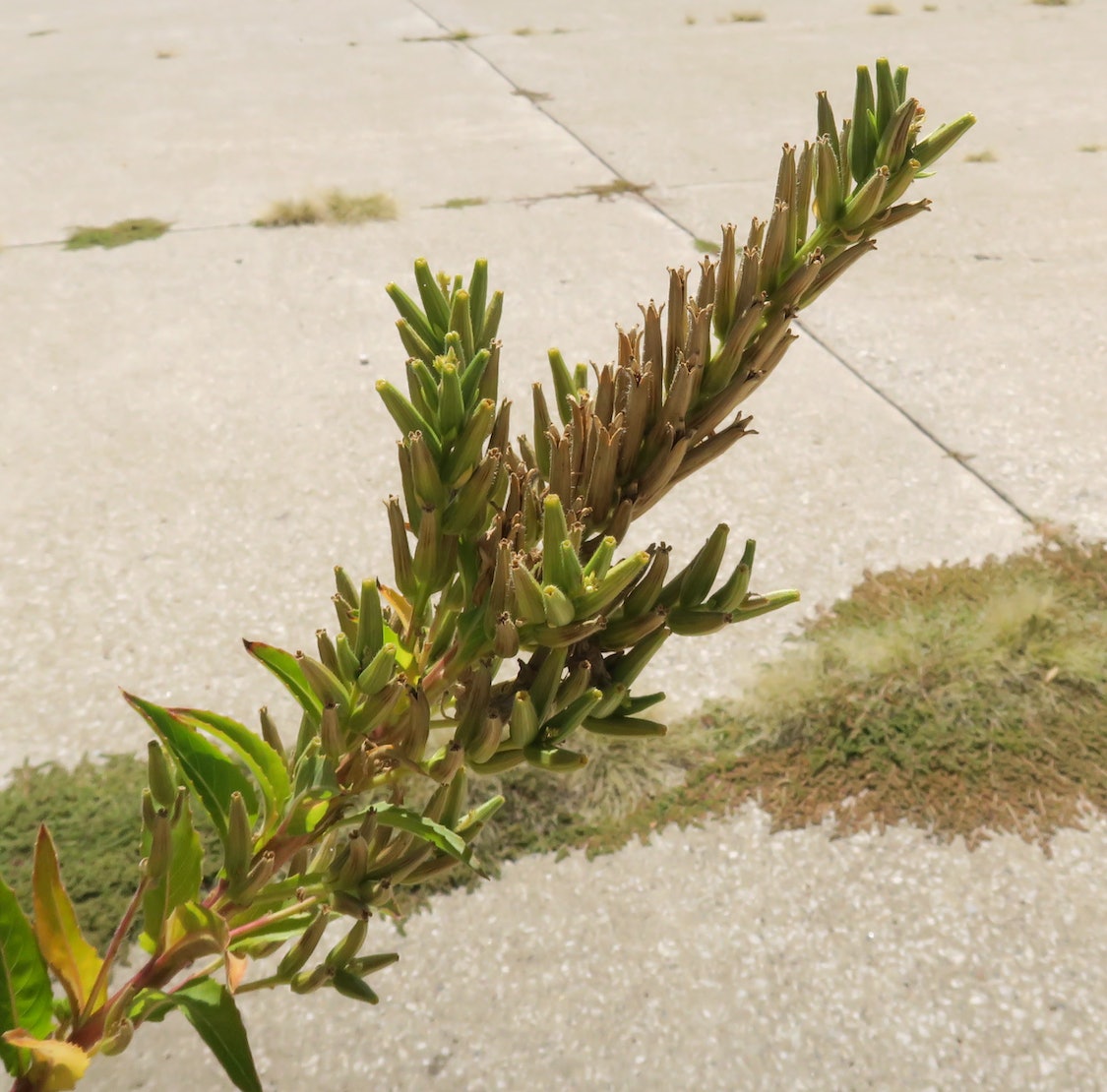 The Cherokee, Iroquois, Ojibwas, and Potawatomi were among several Native American tribes that used common evening-primrose for both food and for medicinal purposes. The roots were boiled and eaten like potatoes. The young leaves were cooked and served as greens. The shoots were eaten raw. A tea was made from the plant and used as a dietary aid or stimulant to treat laziness and "overfatness." A hot poultice made from the pounded roots was applied externally to treat piles and boils. A poultice made from the entire plant was used to treat bruises. The roots were chewed and rubbed onto the muscles to improve strength. The plant was used to treat pain associated with menstruation as well as bowel pain.

Unfortunately, Japanese beetles (an invasive species) apparently like feasting on the foliage as well. Lora Conrad took this picture in her corner of southeast Iowa. 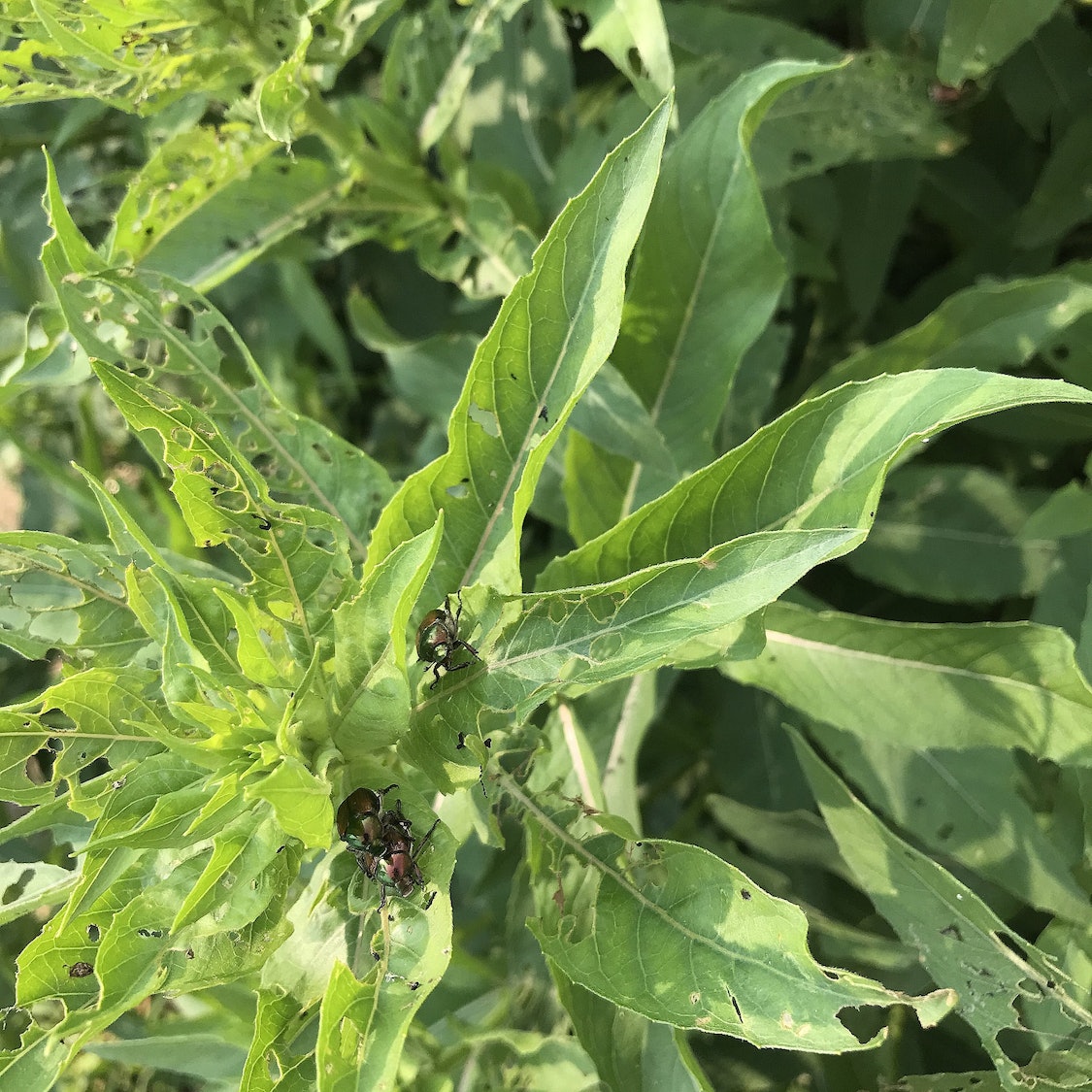