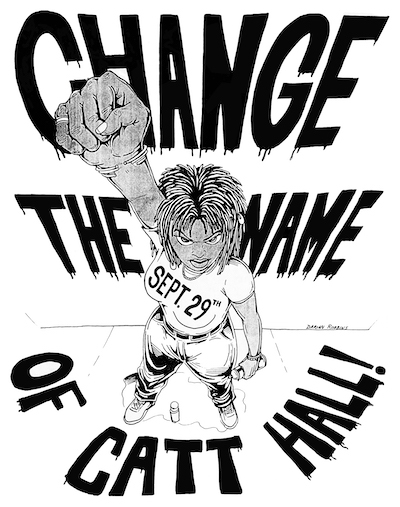 In the Autumn of 1995, Iowa State University’s grand plans to name a building after alumna and women’s suffragist Carrie Chapman Catt were coming to fruition. However, the university administration had failed to hold open discussions regarding Catt’s actions during her lifetime and how her legacy could negatively impact the welcoming community and student life that ISU had committed to build.

At the time, Sloss Women’s Center Director Celia E. Naylor objected to keeping Catt’s bad-faith, white supremacist actions under wraps from the student body. Naylor requested that the university hold open forums to discuss Catt’s history of political expediency, but ISU refused to seek student input. At the official ceremony, there was no mention of the xenophobic, racist, and classist tactics and writings Catt used to justify suffrage for white women.

“It will be readily seen that granting the vote to woman and cutting off the vote of the slums, if it could not be otherwise controlled, would result at once in good to the nation.”

When the building was renamed Catt Hall, ISU's retention and graduation rates of African American, Indigenous, Latinx, and first-generation students were dismal. Adding insult to injury, this lack of action on equity came from a land grant university that billed itself as the best in the country while operating on stolen land--and offering little in the way of scholarships or programming to Indigenous students.

While neglecting to change their recruitment and retention efforts towards BIPOC students in any meaningful way since the 1990s, the university has continued to give lip service to the issue of naming buildings on campus. According to university data, “underrepresented minority (URM)” students made up 4 percent of the student population in the 1990-1991 academic year. Those same student communities made up approximately 9 percent of students during the 2020-2021 academic year.

Both issues—how we educate and nurture students, and how we honor those deemed heroes—deserve more consideration than ISU has given.

“Woman suffrage would so vastly increase the white vote that it would guarantee white supremacy if it otherwise stood in danger of overthrow.”

Although Iowa State clings to intellectual dishonesty, the historical record is clear: white women within the suffrage movement, including Catt, espoused racist, xenophobic, and classist views. They used that rhetoric as a strategy to court the support of southern white men.

Yes, Catt was a product of her time–who isn’t? That cannot be an excuse to defend her acquiescence to white supremacy and the use of voting barriers to support white women’s suffrage. Catt condoned the dehumanization, torture, and killing of Black people for the right of rich, land-owning, white women to vote. Regardless of the varied interpretations of her personal leanings, she did the work of white supremacy. She embraced and amplified racist sentiments to further her own ends.

“It is an absolute fabrication that I have at any time advocated marriage between the white and negro races. Furthermore, I believe it to be an absolute crime against nature.”

Catt’s advocates ask us to center her in the discussion of the enfranchisement of all women, including Black women and other people of color. But examining her work and her expressed views on race and Black Americans exposes her racism. As many have argued before us, Catt's racism has become an undisputed fact in the field of history and cultural studies.

Most recently, public historian Dr. Mark Barron raised these points in an open letter to the Iowa State community. Dr. Katy Swalwell, researcher and author of Amazing Iowa Women, has observed that Catt's support for racism would not be a controversial statement to any professional historian. Others who have addressed this issue include Dr. Roslyn Terborg-Penn in her book African American Women in the Struggle for the Vote, 1850-1920.

For far too long, American history has been written and taught by individuals presenting historical texts through a white lens and centering whiteness. This is a poor and inaccurate representation of the past. Only when we are able to unlearn this way of looking at history can we truly understand a more complete picture of historical figures and events.

Only then can we correct the record and stand in our truth: white supremacy is not acceptable now and wasn’t acceptable when Catt advocated for it. No amount of cleansing by a research firm will alter that fact.

“Much of the public debate surrounding Carrie Chapman Catt’s racism begins with two fallacies that have persisted for at least 25 years: 1) that the research Black women, then students and scholars at Iowa State, conducted regarding Carrie Chapman Catt lacked ‘proper research and proper understanding of history’ and 2) that a historical figure’s racist statements need to be regarded within the context of the era in which they were made.”

Iowa State has always hid behind a veil of objectivity to dismiss the concerns of BIPOC. After 26 years, ISU has returned to this crutch through their hiring of History Associates for their current renaming committee. That firm has previously researched Catt and created a celebration site of the women’s suffrage movement, glossing over Catt's racist tactics and failing to hold white women suffragists accountable for the considerable harm done to people of color in the struggle for voting rights.

Objective researchers avoid confirmation bias by seeking to disprove their own theories–or in scientific parlance one assumes the null hypothesis is true. The September 29th Movement scholars have been doing this for 26 years. Our work has been checked relentlessly by apologists for Catt, and we always respond with deeper scholarship. Due to their institutional power, ISU has not been subjected to the same scrutiny, despite having researched this issue with less rigor.

The university has locked impacted students out of the renaming process once again. Breaking from the precedent set by the Government of the Student Body in 1998, ISU refused to include members of The September 29th Movement and allied groups such as Students Against Racism or Black Lives Matter in the membership of the new review committee.

Under the leadership of President Wendy Wintersteen, ISU has also neglected to recruit members from the university's own Catt Hall Study Group--the Race, Education, Activism and Campus History (REACH) Committee. The review committee could benefit from the expertise of those who serve on REACH, which was convened to study the history of Catt, the naming process, and resulting student activism.

Catt’s racist rhetoric is well documented and (outside of ISU) is widely accepted as an accurate representation of the suffrage movement. That’s what makes Iowa State’s decisions to obfuscate the truth so exhausting. In the end, having engaged in the busy-work of hiring a seemingly “objective” outside firm to “do their own research,” administrators have only delayed what will inevitably be their decision: refuse to rename the building. White supremacy and its attendant power allows them to do so.

Change the name of Catt Hall.

“White supremacy will be strengthened, not weakened by Women’s Suffrage.”

Top image: Logo for the September 29th Movement developed in 1995. Image provided by Heather Strachan and published with permission.