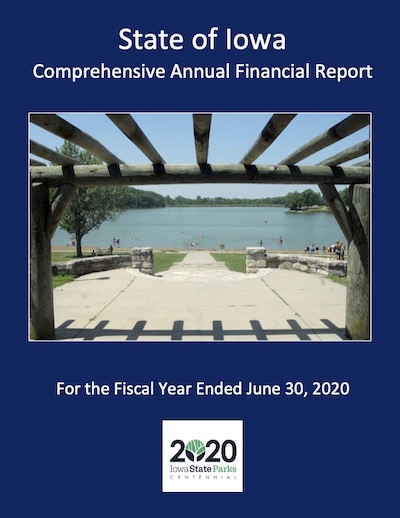 More than nine months behind schedule, the state of Iowa has released its Comprehensive Annual Financial Report for the fiscal year that ended on June 30, 2020. The report was posted to the Iowa Department of Administrative Services website on October 5.

Under normal circumstances, the state would have published this report in late December 2020. However, Iowa State University has had significant accounting problems since switching to the Workday computer system for financials at the beginning of the 2020 fiscal year. State government entities typically submit their fiscal year-end financials to the state by October 1, but ISU was still sending supplemental pieces six months later.

Deputy State Auditor Marlys Gaston told the Iowa Board of Regents last month that state auditors anticipated sending an internal control letter to ISU regarding misstatements or erroneous information in some of the university’s financial statements.

Now that the state's annual financial report has been completed, the State Auditor's office can proceed with other work that is well behind schedule. The State of Iowa’s Single Audit Report, which covers federal dollars that all state agencies and universities spent during the previous fiscal year, typically comes out in late March but probably will not be ready until late October or early November.

State auditors also issue about four dozen annual Reports of Recommendation covering state agencies' activity. Those reports usually come out between July and October of the following year. None of the reports from fiscal year 2020 have been released yet.

Under contracts Iowa signed in 2019 and 2020, most of state government is scheduled to switch to the Workday computer system for accounting during the summer of 2022.

UPDATE: The report was posted to the Electronic Municipal Market Access (EMMA) website on October 6. EMMA is the leading source of information on municipal bonds. Iowa should have posted this report there by January 26, but instead posted a letter explaining that a reporting entity “has not been able to provide the required financial information.”