The ongoing issues at ISU have pushed other audit work months behind schedule, Deputy State Auditor Marlys Gaston explained during a 20-minute presentation to the Iowa Board of Regents on September 15. In addition, Gaston told the governing body for Iowa's state universities the State Auditor's office expects to issue an internal control finding to ISU. That rarely happens for the Regents institutions and indicates that ISU's financial statements for FY2020 included inaccurate information.

ISU switched to the Workday computer system for accounting at the beginning of the 2020 fiscal year. The subsequent challenges raise questions about what will happen when most state government agencies transition to Workday for accounting, which is supposed to occur during the summer of 2022.

Normally the Iowa Department of Administrative Services would have published the Comprehensive Annual Financial Report for the fiscal year ending on June 30, 2020 by December 31 of last year. Gaston told the Regents last week she hoped that report would be issued "very shortly."

Iowa's public universities usually submit their year-end financial data to the state by October 1, but ISU had trouble compiling accurate information, even after enlisting many staff to help with the project. ISU officials told Bleeding Heartland early this year the university would finish sending the financials by mid-February. But the State Auditor's office later said ISU had provided "incomplete and very draft financial statements in February which did not include the fiduciary statements or any footnotes or other information needed to meet financial reporting requirements."

More than six months behind the usual schedule, ISU sent the last of the "supplemental pieces" to the state. A preliminary, unaudited version of the annual financial report was posted online in late April. At that time, the State Auditor's office indicated they hoped the final report would be ready by the end of June. But at this writing, the leading national resource for information on municipal bonds still shows only the preliminary version.

Nancy Dunkel, who chairs the Board of Regents' Audit and Compliance Committee, asked during the September 15 meeting, "Just to be clear, Marlys: the challenges at Iowa State were around the Workday program?"

Gaston confirmed, "They were," and described the problems as a "perfect storm," since ISU experienced turnover of some key financial staff while implementing a "huge change" in their accounting system.

The deputy state auditor indicated the office was close to being able to issue ISU's financials for the 2020 fiscal year. Dealing with Workday "was a challenge," but in the end "we could test the information, and we could rely on that information."

John McCormally, chief of staff for State Auditor Rob Sand, told state officials in November 2019 that auditors were concerned about being able "to retrieve auditable data" from the Workday system. Those worries proved well-founded.

Gaston told the Regents she anticipated sending an internal control letter to ISU soon. She explained that if state auditors find misstatements or erroneous information in an entity's financial statements, it means "there's a breakdown in internal control," and "we do have that case with Iowa State" related to how data was flowing from the "new information system."

OTHER AUDIT WORK FOR ISU DELAYED The "most significant" change for this year was that state auditors were unable to do any interim work on ISU's fiscal year 2021 report prior to July 1. That was "entirely due" to the need to resolve issues with the 2020 report, Gaston said.

Normally audit staff spend about 750 hours in May and June on interim work, in order to get a head start before the fiscal year ends on June 30. The State Auditor's office pushed those ISU hours into the current fiscal year, which will be "a challenge" due to staffing constraints. Nevertheless, Gaston expressed hope that this year's Comprehensive Annual Financial Report will be issued on time in December.

During the fiscal year that ended on June 30, state auditors had to spend about 2.5 percent more hours doing work for Regents institutions, mostly because of ISU's accounting problems. The costs assessed to the Regents didn't increase by as much as they might have, because the 750 hours that couldn't be spent on interim work at ISU were moved into the current fiscal year, which began on July 1. Audit costs this year are also expected to increase because state auditors will need to review how the universities used federal COVID-19 relief funds.

DOZENS OF OTHER STATE AUDITS DELAYED

Federal law requires an annual "Single Audit" for non-federal entities that receive a certain amount of federal grants. Normally, the State of Iowa's Single Audit Report, which covers federal dollars that all state agencies and universities spent during the previous fiscal year, comes out in late March.

Gaston told the Regents the Single Audit for FY2020 "is very late as well," because that report can't be issued before the Comprehensive Annual Financial Report. She expects that work to wrap up in "October or early November," adding that the delay is related to "Iowa State's portion of the Single Audit."

Each year, state auditors also release "reports of recommendation" for the previous fiscal year for every state government entity, including the Regents universities. Most of those reports are routine, but sometimes auditors recommend corrective actions if they find what Gaston called a "significant deficiency or material weakness" in internal control or compliance.

Sonya Heitshusen, communications director for the State Auditor’s office, told Bleeding Heartland on September 20 that the office "usually issues approximately 48 Reports of Recommendation on State Agencies. In a typical year, the Auditor’s Office starts getting them out in July. Most are completed by the end of September, some extend into October."

None of those reports have been issued yet, because they must wait until the state's Comprehensive Annual Financial Report and the internal control finding for ISU have been finalized. Auditors have already issued letters to the University of Iowa and University of Northern Iowa indicating they found no internal control problems during fiscal year 2020.

Bleeding Heartland sought comment from Dunkel on whether she had any concerns going forward about the ISU accounting problems. The Board of Regents' senior communications director Josh Lehman provided this statement from Dunkel on September 20: "I appreciate the continued hard work of the State Auditor’s office and them taking the time to speak to the Audit and Compliance Committee at last week’s Board of Regents meeting. I welcomed the comments and answers to questions and don't have anything else to add."

The Government Oversight Committees of the Republican-controlled Iowa House and Senate have held no hearings on controversies surrounding the state's Workday contracts or the problems compiling ISU's year-end financial data. During the 2021 legislative session, GOP lawmakers approved additional funds to finish paying for the state to acquire the Workday software system.

UPDATE: On October 27, the State Auditor's office released its report on ISU's accounting and internal control. Auditors found that after bringing new financial software online at the beginning of the 2020 fiscal year, ISU "was unable to produce timely and accurate financial statement reports which caused several misstatements in the draft financial statements and a significant delay in issuing the University’s report."

The report cited a "lack of understanding of recording transactions and obtaining reports in the new accounting software," and no "policies and procedures in place to ensure an independent review of the financial statements or the underlying transactions." That meant ISU employees didn't properly record some transactions and didn't detect errors "in the normal course of performing their assigned functions," forcing "material adjustments" to ISU's financial statements and delaying the state's comprehensive annual report.

The report included ISU's response to the findings:

Management acknowledges the deficiencies in processes and lack of appropriate training on the Workday system. Training has been developed and delivered to staff to support their understanding of higher education transaction cycles and the Workday system. An in-depth project plan for management of future engagements has been developed to include assignments, reviewer responsibilities, and deadlines to support timely completion of financial reports and supporting documentation. Further, journal entries, supporting documentation and financial statements are being reviewed by financial leadership to ensure material accuracy and presentation.

Appendix 1: Official video from Iowa Board of Regents meeting on September 15. The relevant portion begins around the 04:32:00 mark (for about a minute the audio stops working, but it comes back).

Appendix 2: Key page from "Independent Auditor’s Report on Internal Control over Financial Reporting and on Compliance and Other Matters on Iowa State University of Science and Technology, Ames, Iowa for the year ended June 30, 2020." (The full report is here). 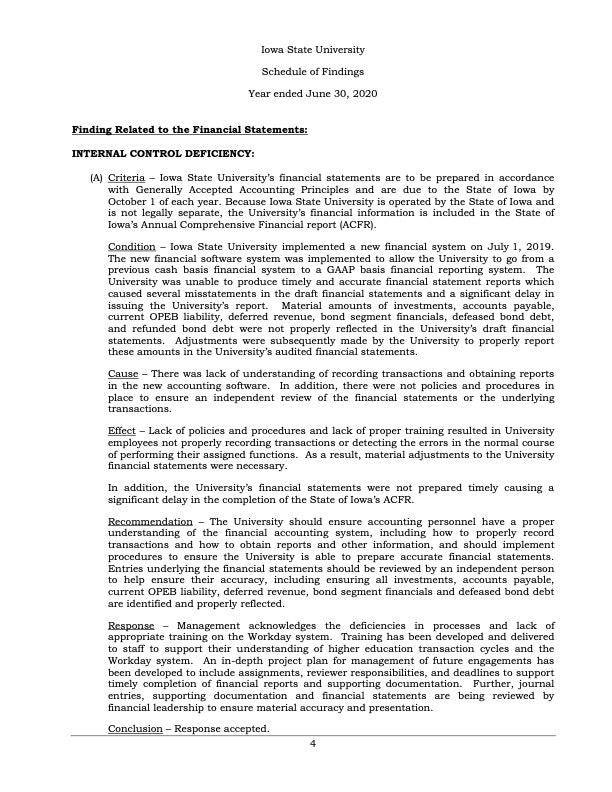