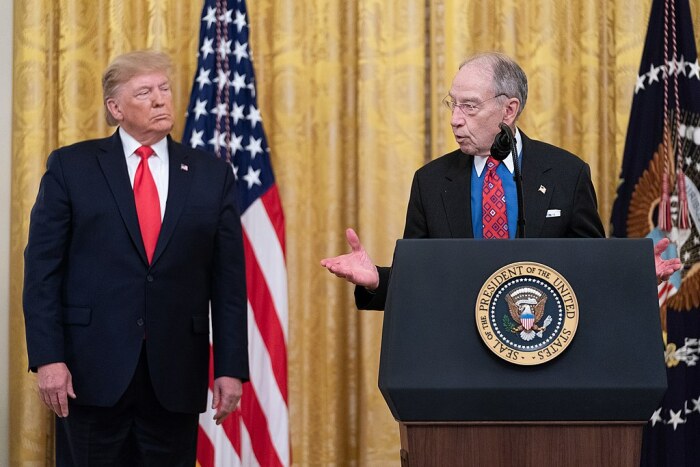 The U.S. Senate Judiciary Committee's Democratic staff on October 7 published the most extensive report to date on how President Donald Trump and his allies pressured the Department of Justice to help overturn the 2020 presidential election. The interim report and newly-released transcripts from the committee's interviews with three former senior DOJ officials provide many details on the criminal conspiracy that played out in plain sight last December and January.

Also on October 7, Judiciary's ranking Republican, Senator Chuck Grassley, released the minority staff's report on the same investigation. In this 140-page dispatch from bizarro world masquerading as a "factual summary" of DOJ officials' testimony, Trump "did not exert improper influence on the Justice Department," and did not use the department to overturn the election. Rather, his "concerns centered on 'legitimate complaints and reports of crimes' relating to election allegations."

The minority report fleshes out a version of reality Grassley's been pushing for months. The senator asserted in the Judiciary Republicans' October 7 news release,

The available evidence shows that President Trump did what we’d expect a president to do on an issue of this importance: he listened to his senior advisors and followed their advice and recommendations. Contrast that with President Biden’s actions on Afghanistan. Biden ignored the advice of his generals and went ahead with a reckless and disaster-filled withdrawal.

Nice try bringing up Afghanistan, where long before Joe Biden took office, the Trump administration committed to a full withdrawal of U.S. forces. But I digress, and Grassley deflects.

While trying to subvert the peaceful transfer of power, Trump pursued dozens of meritless lawsuits. He pressured state legislators to appoint alternate slates of electors. He strong-armed Georgia's secretary of state. He encouraged thousands of supporters to march to the Capitol on January 6, in hope of disrupting the electoral college count.

And he tried to get the DOJ to send letters and file a lawsuit aimed at reversing Biden's wins in key states.

Since August, Grassley has promoted the idea that Trump merely engaged in "robust discussion" with senior aides and attorneys. The Republican staff report highlights the lack of folllow through: the president didn't fire senior DOJ leaders or demand that they file a lawsuit benefiting his campaign.

But the testimony shows Trump didn't stop trying to undermine democracy because of a change of heart. He abandoned those plans reluctantly, after some advisers persuaded him he wouldn't succeed.

As Washington Post reporter Aaron Blake put it, "That’s not 'this is the wrong thing to do.' That’s 'this won’t work.'"

The minority report also lends credence to the Big Lie Trump has been pushing since last November.

The records acquired by the Committee show that the President’s concerns centered on what he perceived as an attack on the electoral system and his firm belief that the American people had been wronged by election fraud that undermined the sanctity of the 2020 election.269 With these concerns in hand, President Trump’s approach to DOJ was to ensure that it was aware of election fraud allegations and that, with knowledge of those allegations, they were actually doing their job to investigate them.270 [...]

Indeed, President Trump was correct to be concerned in light of the testimony and documentary evidence that the Public Integrity Section and Election Crimes Branch were passive in their approach to investigating election allegations and that [U.S. Attorney in Georgia's Northern District BJay] Pak’s people were “dragging their feet” in investigating matters.280

Early this year, Grassley hyped baseless claims about "election irregularities" and suggested there may be "legitimate complaints about how elections were conducted" in some states. In August, he complained that in their "obsession with destroying Trump," Democrats "have done and will do lasting damage to our political system.”

The senator's latest attempt at misdirection illustrates the real lasting damage. Republicans are so beholden to a cult figure that they justify his attempts to stay in power after losing a free and fair election.

P.S.—Grassley's scheduled to speak at Trump's October 9 rally in Des Moines. He's likely to get a nice shout out, as he did shortly after the senator covered for Trump at the former president's first impeachment trial.

UPDATE: CNN anchor Jake Tapper described Grassley's version of events as "a very, very generous to the point of delusional reflection of what happened," given that Trump "told the Justice Department nine times to undermine the results of the election. Nine times."

During an October 9 interview with Newsmax, Grassley claimed that "just one person" in the Justice Department wanted Trump to try to overturn the election, and Trump "rejected all that."

On Newsmax, Chuck Grassley turns reality on its head by suggesting Trump is a *victim* of the 1/6 commission pic.twitter.com/6QmrukruD8

As expected, Trump endorsed Grassley's re-election at his rally in Des Moines on October 9.