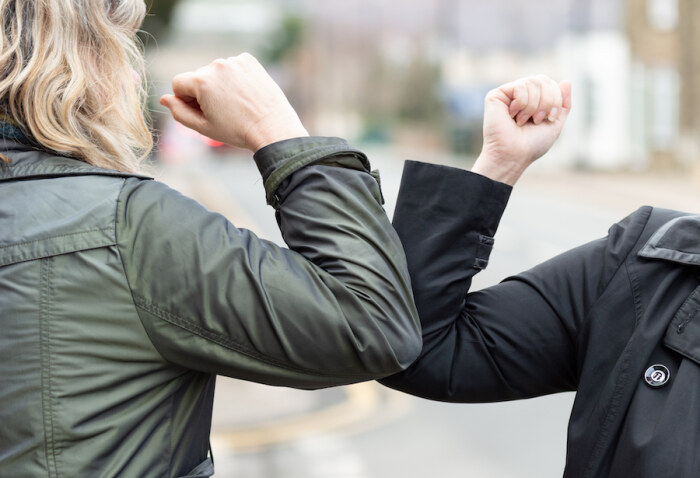 Ira Lacher: Now that the Delta surge seems to be fading and we can dare to dream of being together again, an entire legion of scientific Debbie Downers is scolding us to do away with a millennium-old cultural mainstay.

Recently I attended an event where I didn't know most of the folks, all of whom, as I, were masked. At the close, and we prepared to take our leave, I automatically did what uncounted multitudes have done to acknowledge becoming acquainted with someone new: I offered up a handshake. And a few turned it down. Some preferred the fist bump; others, a forearm touch.

Initially, I shrugged off those responses, simply complying, as requested. But on the drive home it started to bother me because I realized those requests, while perfectly understandable in our COVID world, seemed somehow forced or staged. And I couldn't tell very much about those folks the way I could from a handshake. And that bothered me even more. Because it seems that along with the millions of lives the pandemic has robbed us of, it's robbing many of the survivors of their humanity, specifically, the need for physical touching.

"Human beings are wired to touch and be touched," asserts Baylor University psychiatry professor Dr. Asim Shah, who adds, "When someone is [touch] starved, it’s like someone who is starved for food."

For more than a year and a half we've been touch starved, meeting with colleagues, breaking bread with family, and even worshiping on Zoom. And now that the Delta surge seems to be fading and we can dare to dream of being together again, an entire legion of scientific Debbie Downers is scolding us to do away with a millennium-old cultural mainstay.

Originating in antiquity, the handshake began as a means of assuring that the other guy could prove he wasn't carrying a knife; the up-and-down "shaking" motion was further proof that both persons had nothing up their sleeves. For hundreds of years, most cultures have embraced the handshake, albeit with differences.

But now, scientists, sociologists, and doctors are recommending that the handshake wither. "I don’t think we should ever shake hands ever again," Dr. Anthony Fauci told The Wall Street Journal. “When you extend your hand, you’re extending a bioweapon," Mayo Clinic infectious disease expert Gregory Poland told the BBC. "Every handshake that you have runs the risk of exposing you or the person you are shaking hands with to the virus,” added William Hanage, associate professor of epidemiology at Harvard. He suggests doing as Hindus do: bow lightly, with hands over the heart.

Surely, everyone practicing this namaste is doing so sincerely. After all, it is so difficult to fake one's sincerity with a bow. As when non-Britons bow or curtsy before Queen Elizabeth, or non-Catholics kiss the ring of the pope.

And, can a bow replace the epiphanies you experience upon shaking someone's hand? Can it betray the same insecurity, tentativeness, or even threat to health of someone with a limp handshake?

"Those with a firm handshake were more [extroverted] and open to experience and less neurotic and shy than those with a less firm or limp handshake," the American Psychological Association reported about an experiment it conducted in 2000, involving 112 University of Alabama students of both sexes. And yes, a handshake may foretell longevity. A 2015 study in the British medical journal Lancet found that the harder the "grip strength," the lower the risk of heart attack or stroke.

“There’s going to be a lot of awkwardness as people try to figure out how to greet somebody, how to professionally welcome somebody, how to meet your daughter’s boyfriend for the first time,” acknowledges Aaron Smith, a Canadian psychotherapist.

When I married into my wife's clan, I was reticent to join them in their free dispensing of hugs and pats on the back; my family didn't do that. But I've become far more comfortable with it and even, ahem, embraced it because -- except maybe in the Godfather movies -- you can't hide the feeling behind a sincere hug. Or a sincere handshake. You can, however, conceal them with an elbow bump, or a chest bump, which can seem like a perfunctory stage direction.

Decades ago, the Sony Walkman and its descendants started us on the long, long trail of winding into the land of personal isolation, a nihilistic trend which the pandemic has accelerated. And now, many experts who profess wisdom are imploring us to tread even further down that lonesome path. And we wonder why we can't get along anymore.