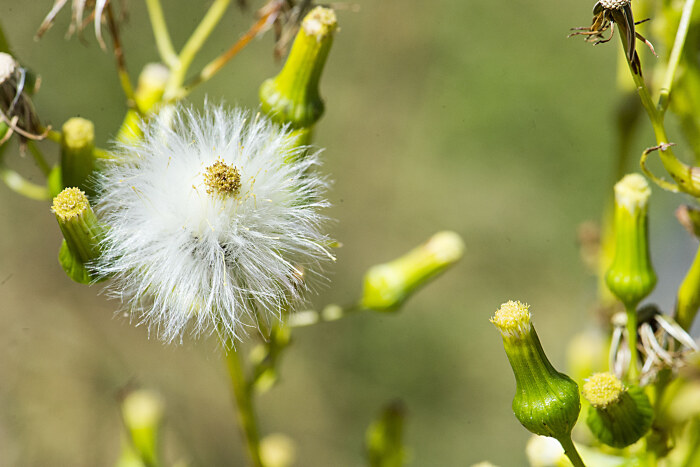 Known variously as American Burnweed or Fireweed or Pilewort, Erechtites hieraciifolius (Senecio hieraciifolius is an earlier synonym) is found throughout Iowa as well as states east of Iowa. The names burnweed and fireweed result from its penchant for occurring in recently burned areas.

Why the other common name? Well, some indigenous peoples extracted oil from the plant and used it to treat piles, also known as hemorrhoids, thus the moniker pilewort.

It is a native summer annual in much of the U.S., as well as Central and South America. With its penchant for disturbed soil, you may see it sprinkled about or exploding in great numbers in recently disturbed soils, replanted prairies, roadsides, open woods, and renovated wetlands. It follows human habitation and disturbance of the soil. While considered “weedy,” it is not invasive. It tends to fade away as new plantings get more established. Despite its obvious appreciation for replanted prairies and native status, it is not listed in the UI “Iowa Prairie Plants” online.

Until this year, I had rarely noticed it. When I did and it was young, I mistakenly thought it was just another wild lettuce. That is easy to do for as a young plant. In early July, as shown here, burnweed is a rosette of leaves with a single stalk. The leaves are alternating, and long, tender, with serrated edges. Unlike wild lettuce, it is not spiny. 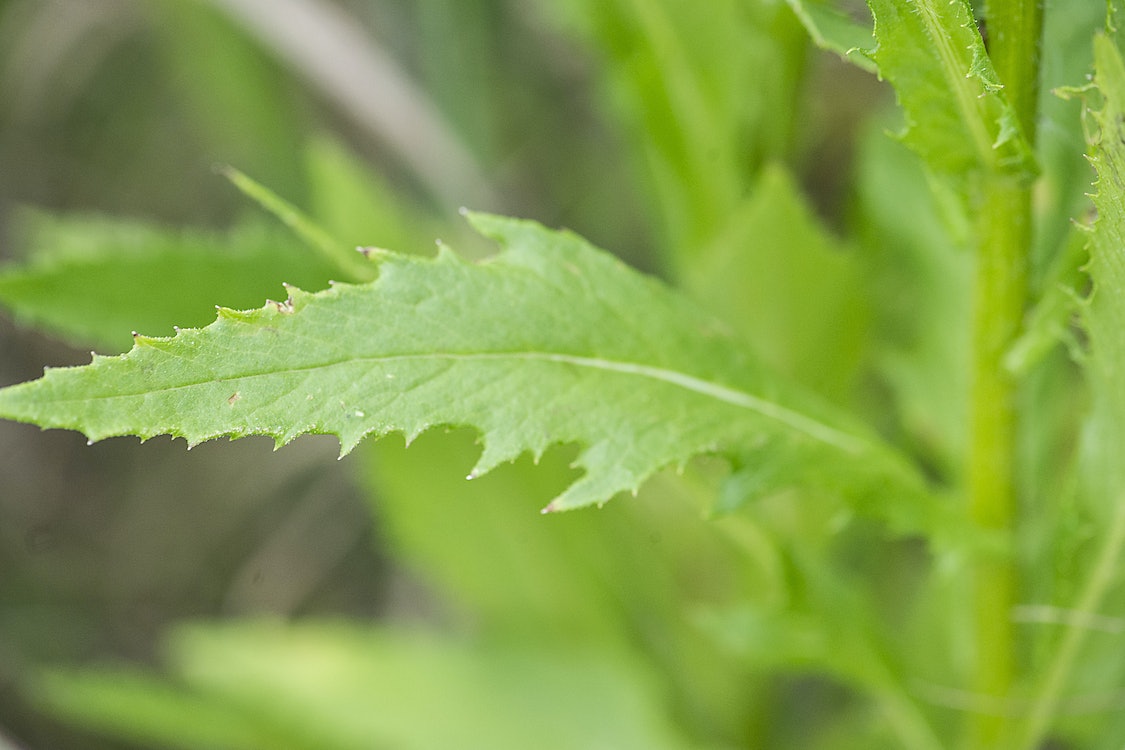 But by early July, burnweed is a foot or more tall and buds are just beginning to show as little green lumps. 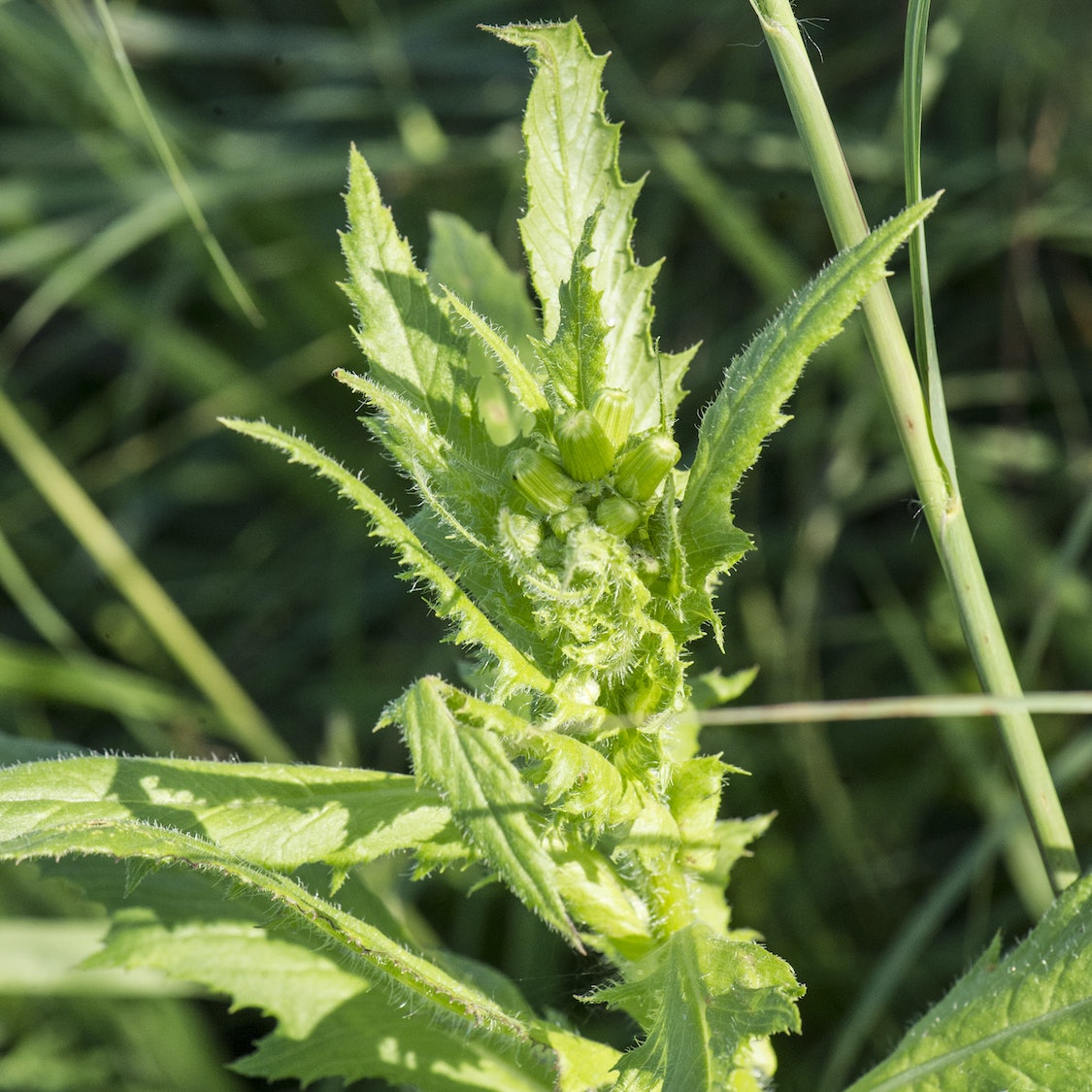 This year, a replanted prairie in Van Buren County that was entering its fifth year has exploded with burnweed along one edge, so there has been much to study. First, I had been distracted by the presence of hundreds of unexpected Foxglove Beardstongue plants. As they waned, I realized that those smaller lettuce-looking plants had grown up and were something else entirely.

A plant growing amid the big bluestem and Indian grass is circled in the photo below, which I took in July. With its tender green leaves, it is still not very noticeable at two feet. At this point, with the plants largely unbranched but buds forming, it may look a lot like mare's tail/horseweed. A look at the leaves will differentiate the two: the horseweed has long, slim leaves and is unbranched, whereas burnweed has serrated, wider leaves. 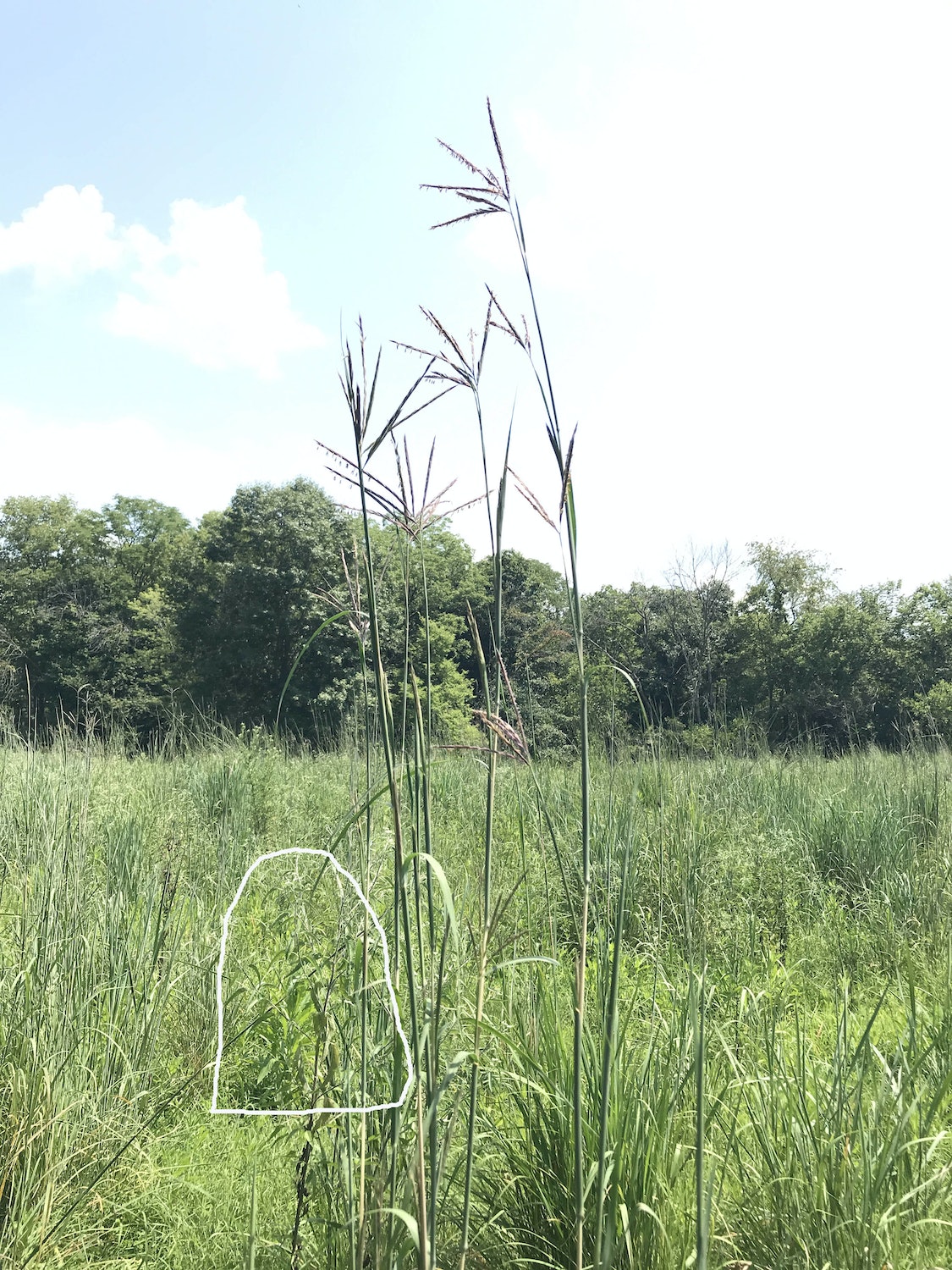 But by early August, buds are crowded together coming from the leaf axils at the top of every plant. As they get taller, they form side branches with open clusters of flower tubes. By this point, it may look a little like groundsel—a smaller, less common plant in Iowa with more lobed, shiny leaves. 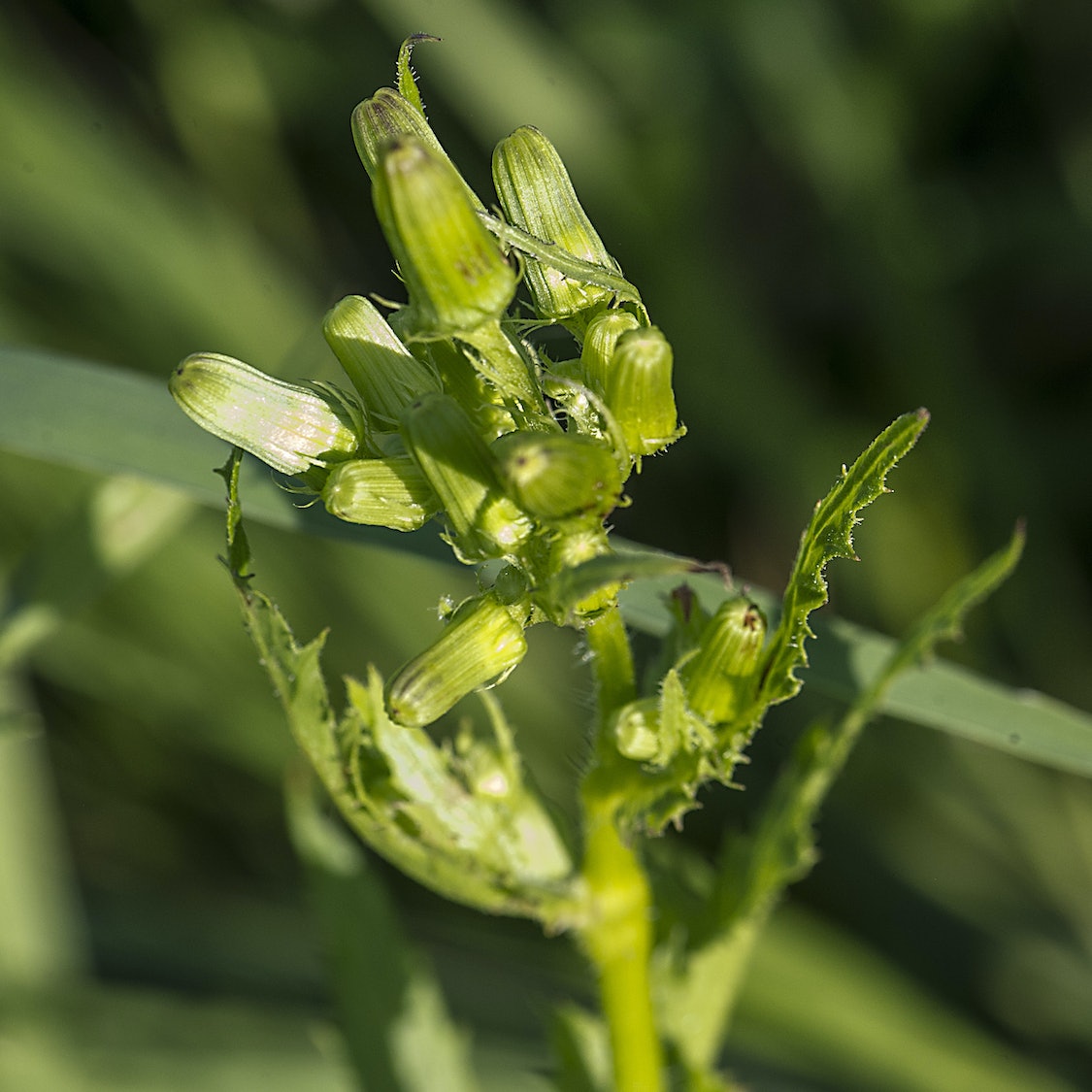 By the first of September the plants are almost as tall as big bluestem seed heads! In ideal circumstances, burnweed can reach a height of ten feet. The tall plants will have multiple branching and clusters of blossoms at the end of each. 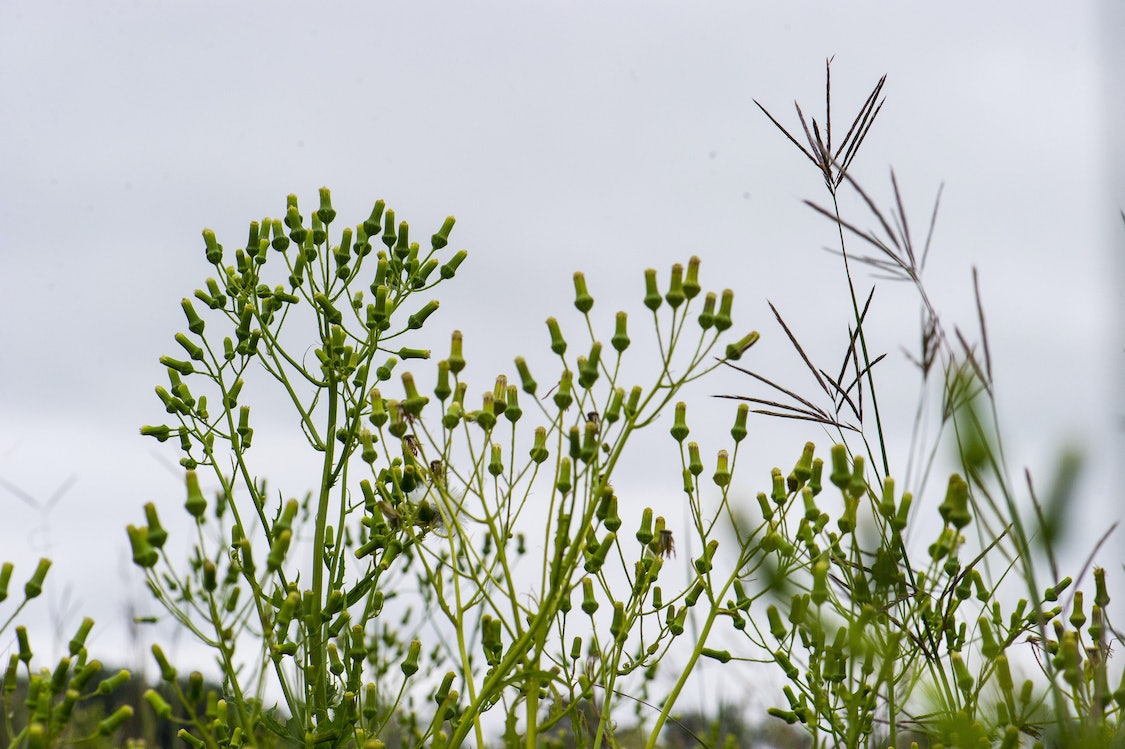 These two macro photos show the shape of the blossom tube which is held upright and is close to an inch in length. The bit of yellowish-brown fuzz is all you see of the disk flowers that barely extend beyond the tubes. The plant wastes no energy on bright colors and flashing petals to attract pollinators, focusing instead on the development of hundreds of seed capsules, each with its own thin, silky thread or pappus to carry it away later. 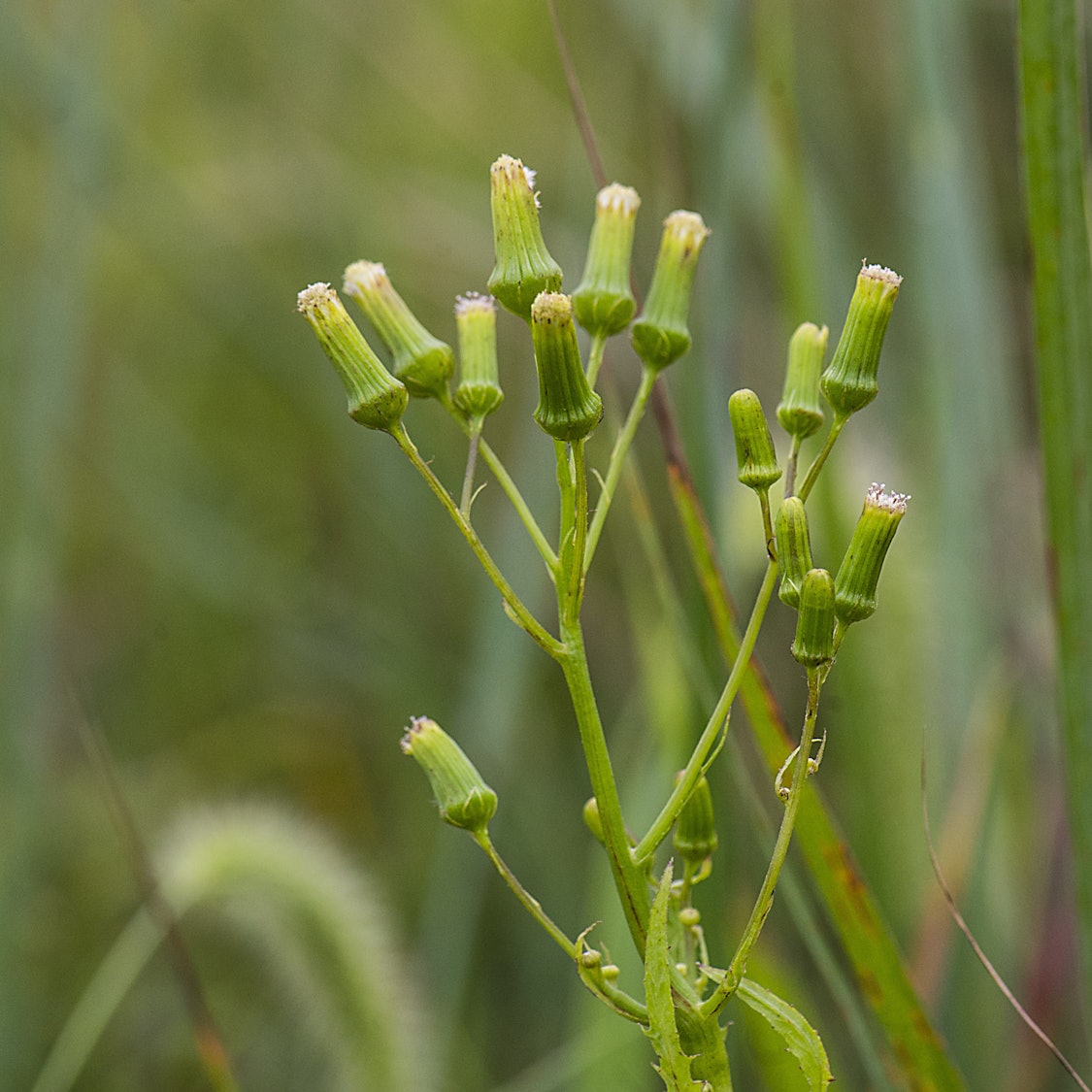 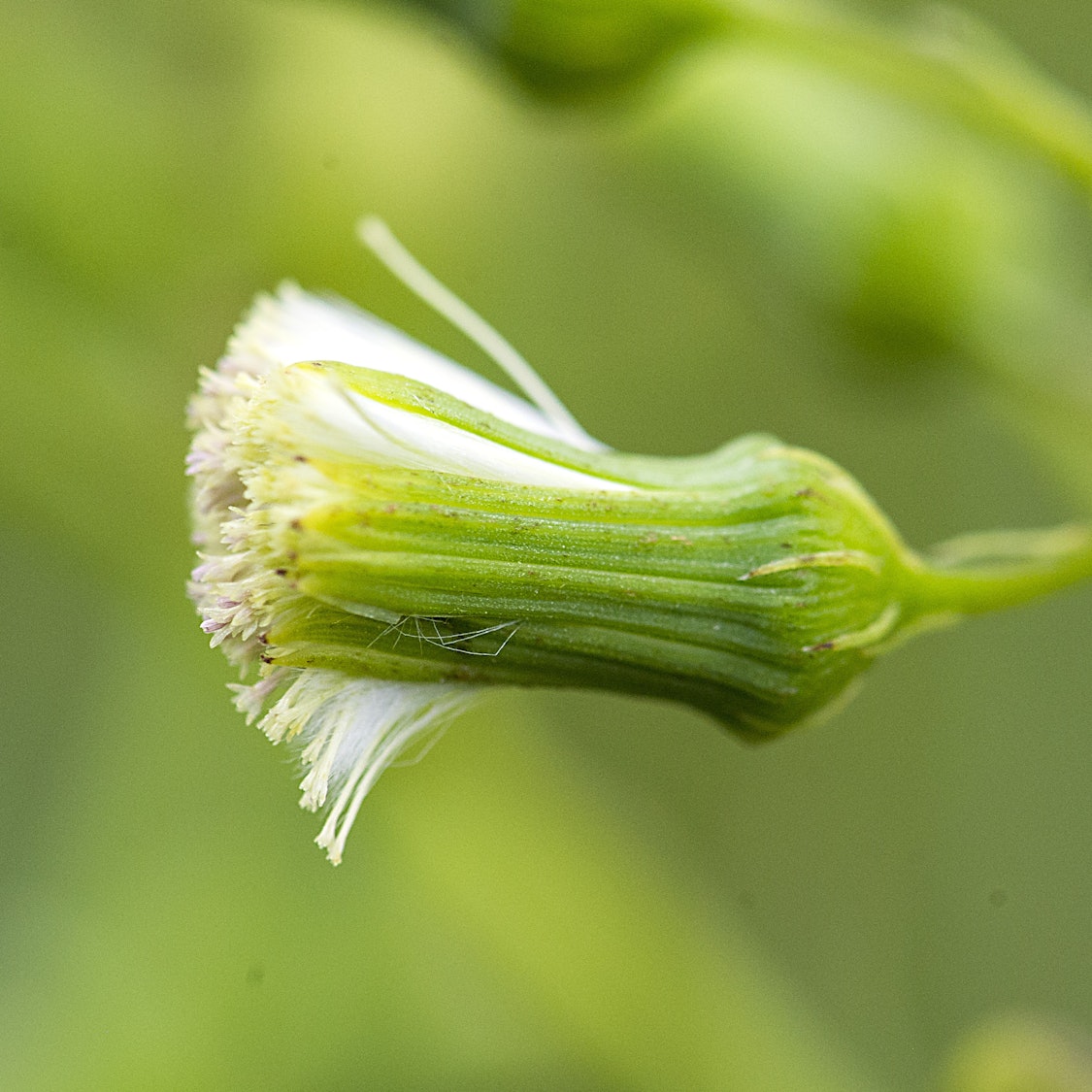 When the blossom is torn open at this stage, you can see the gossamer white threads of the pistillate florets from the tip of the blossom down to the developing seed capsule, still pale yellow at this time. 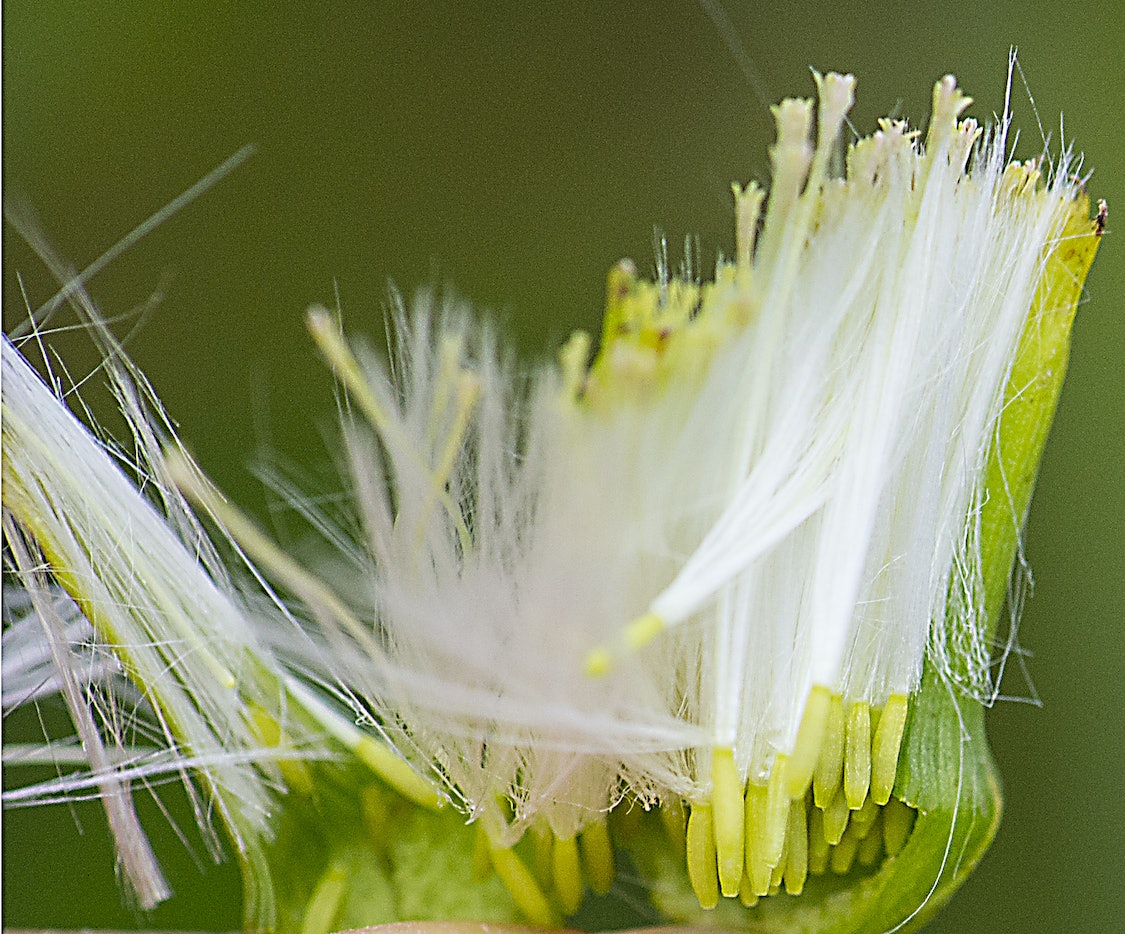 As they begin to ripen, the white threads burst out on their own as shown in this photo of the first one on this stalk to begin to open. 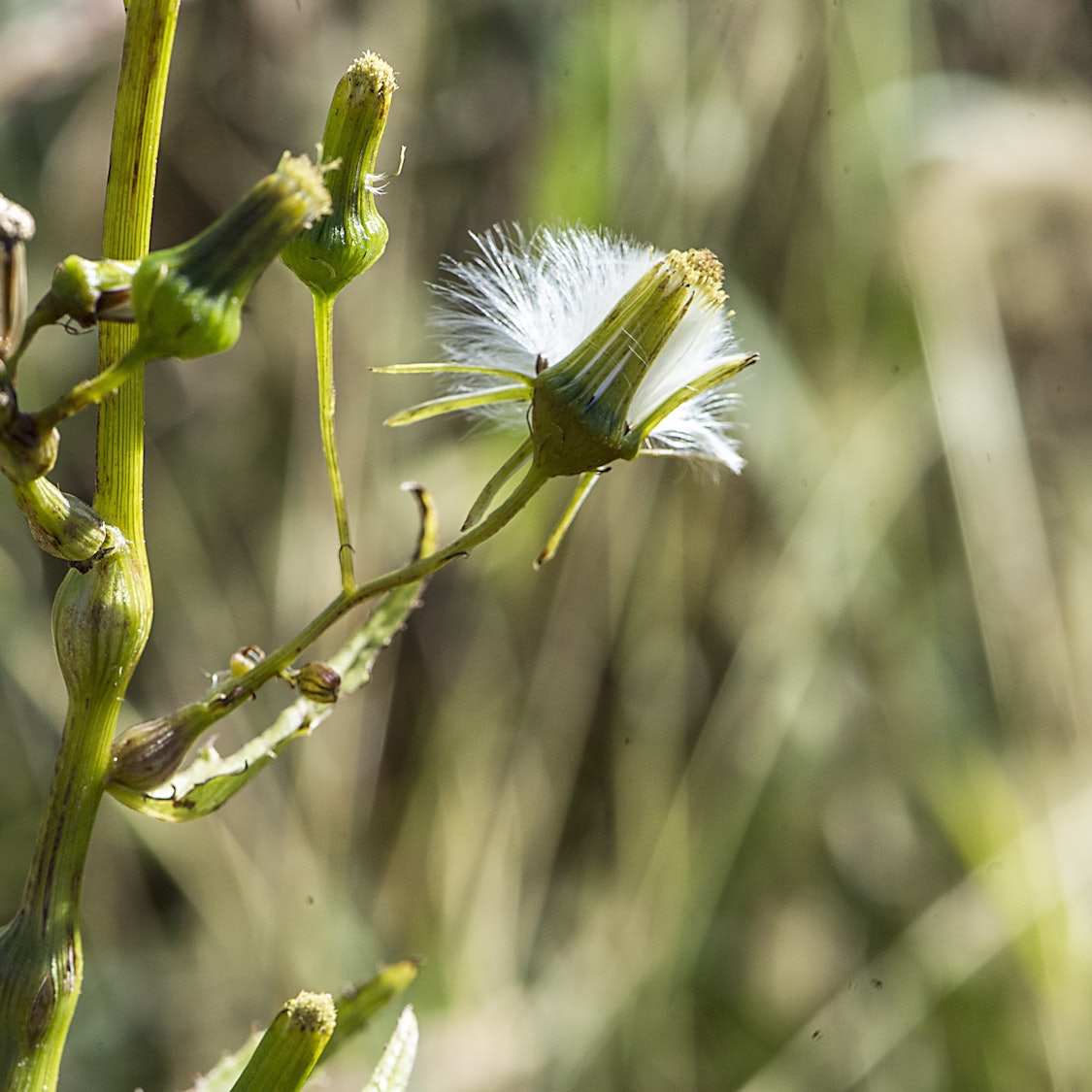 Seeing the seed head fully open, your first thought may be: “A tall dandelion?” 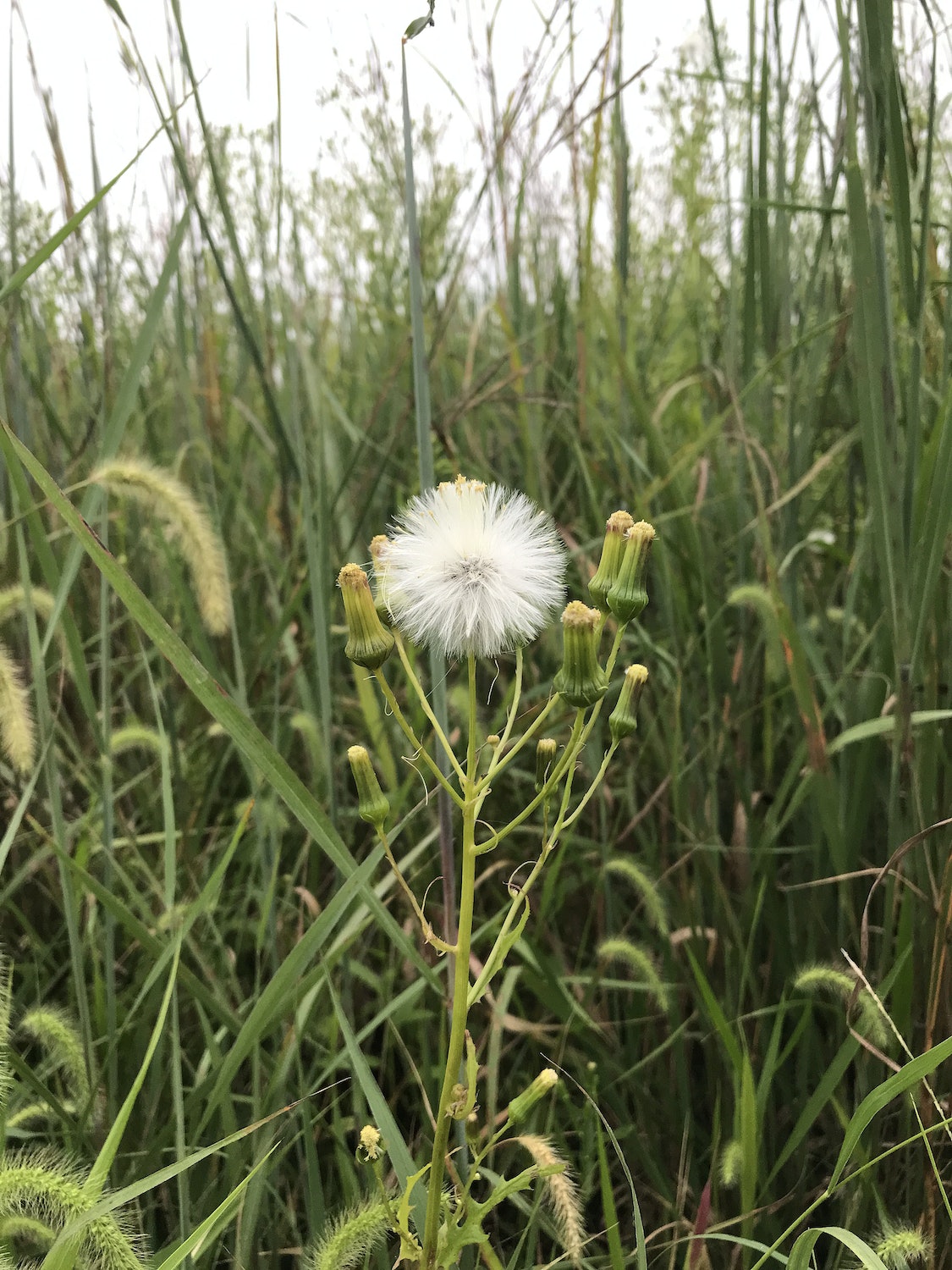 But no, it's the beginning of the explosion of hundreds of white puffs mixed in among the big bluestem and Indian grass, where they are now five to eight feet tall. 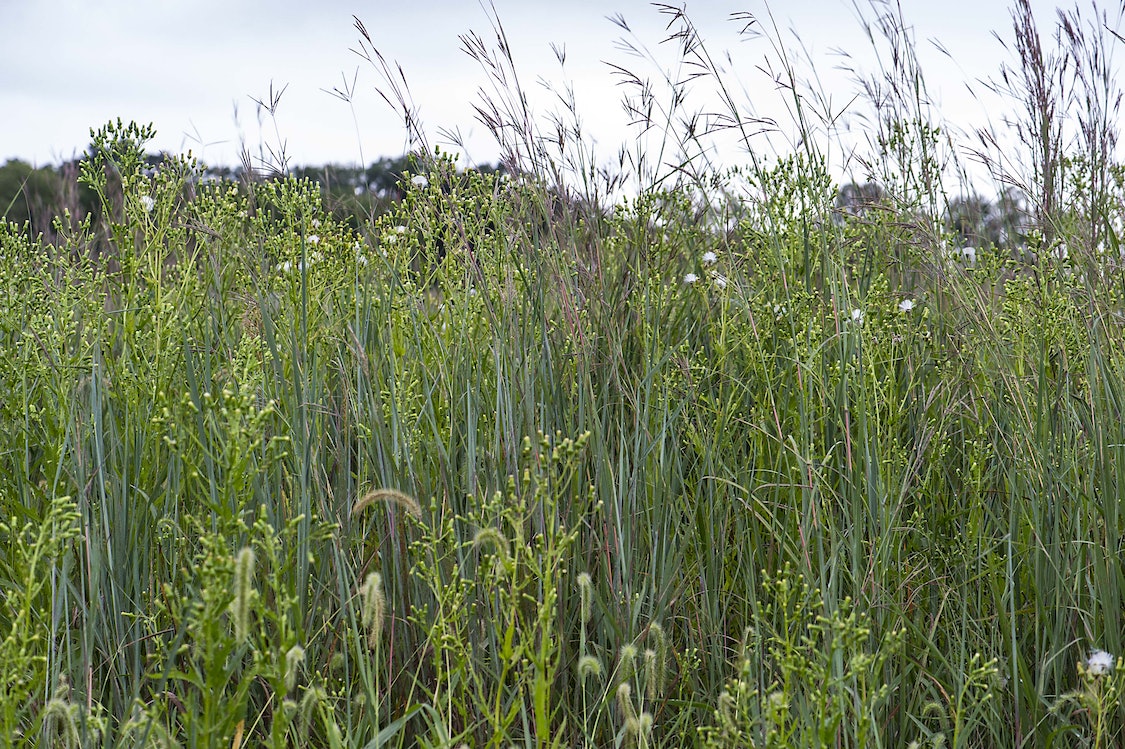 By mid-September, burnweed has come into its own—hundreds and hundreds of white puffy balls springing open, dispersing their white hair and seeds with each puff of wind. 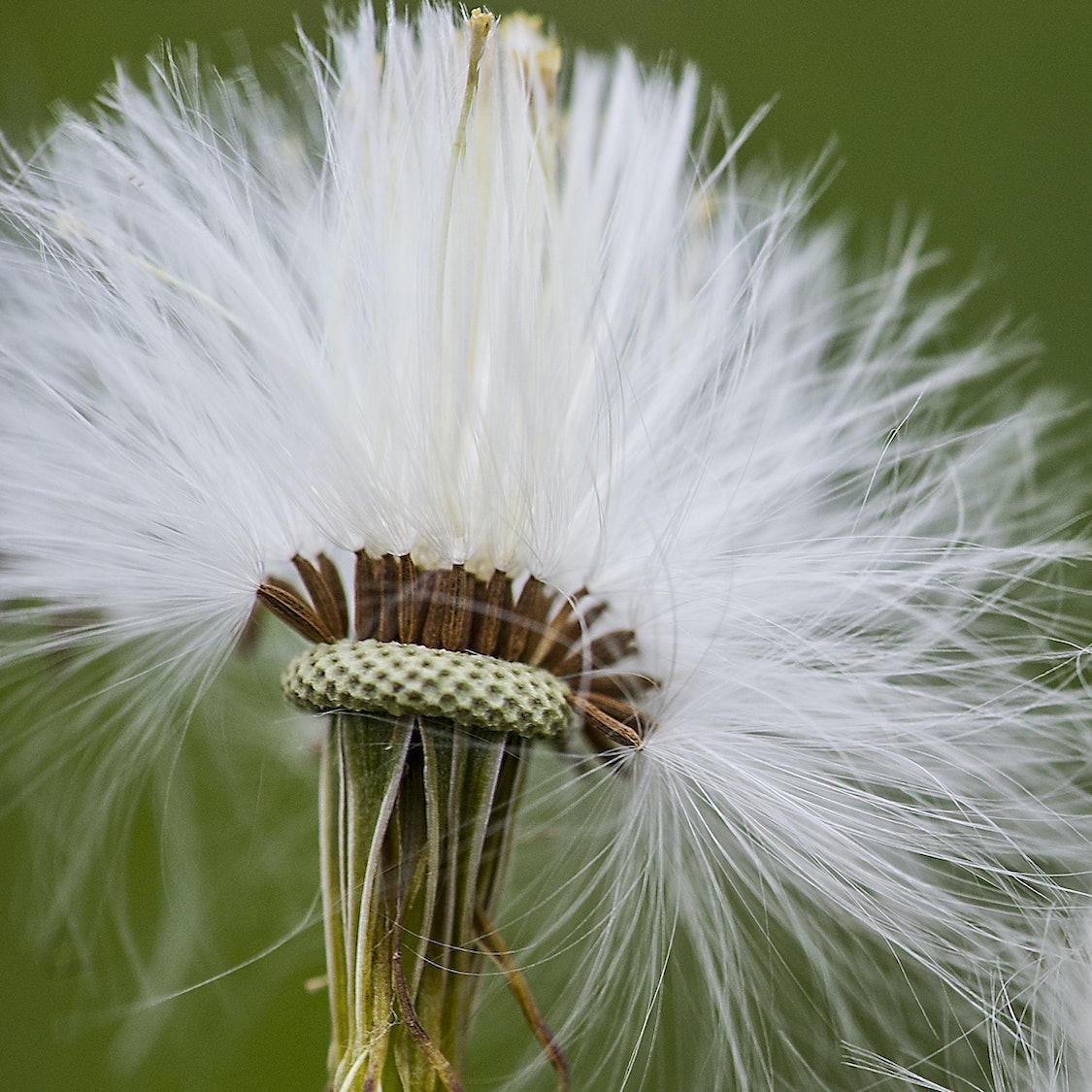 By early October, the show is over---all that remains are the spent plants with tan flat disks hung with streamers of brown dried bracts, looking like tiny brown jellyfish. 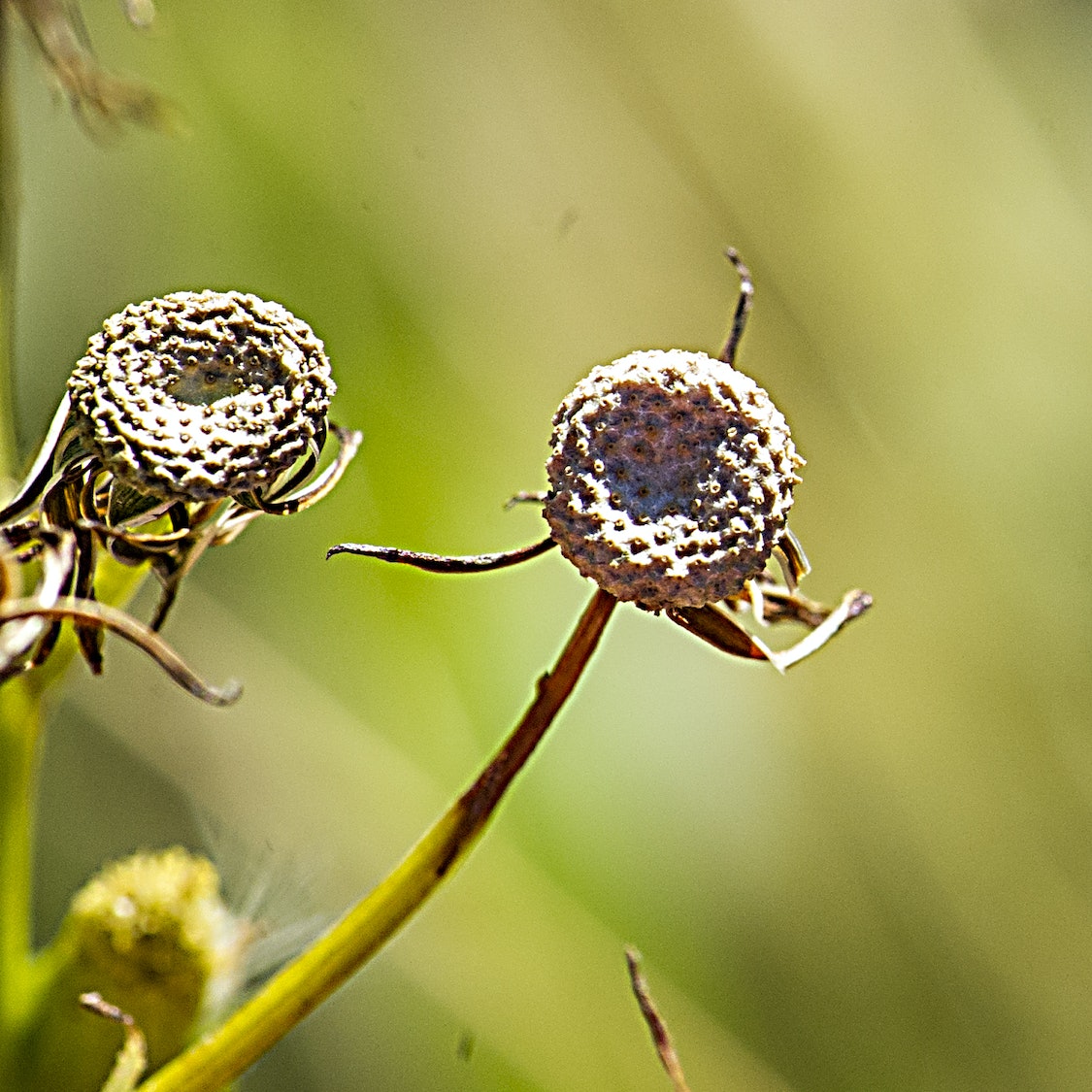 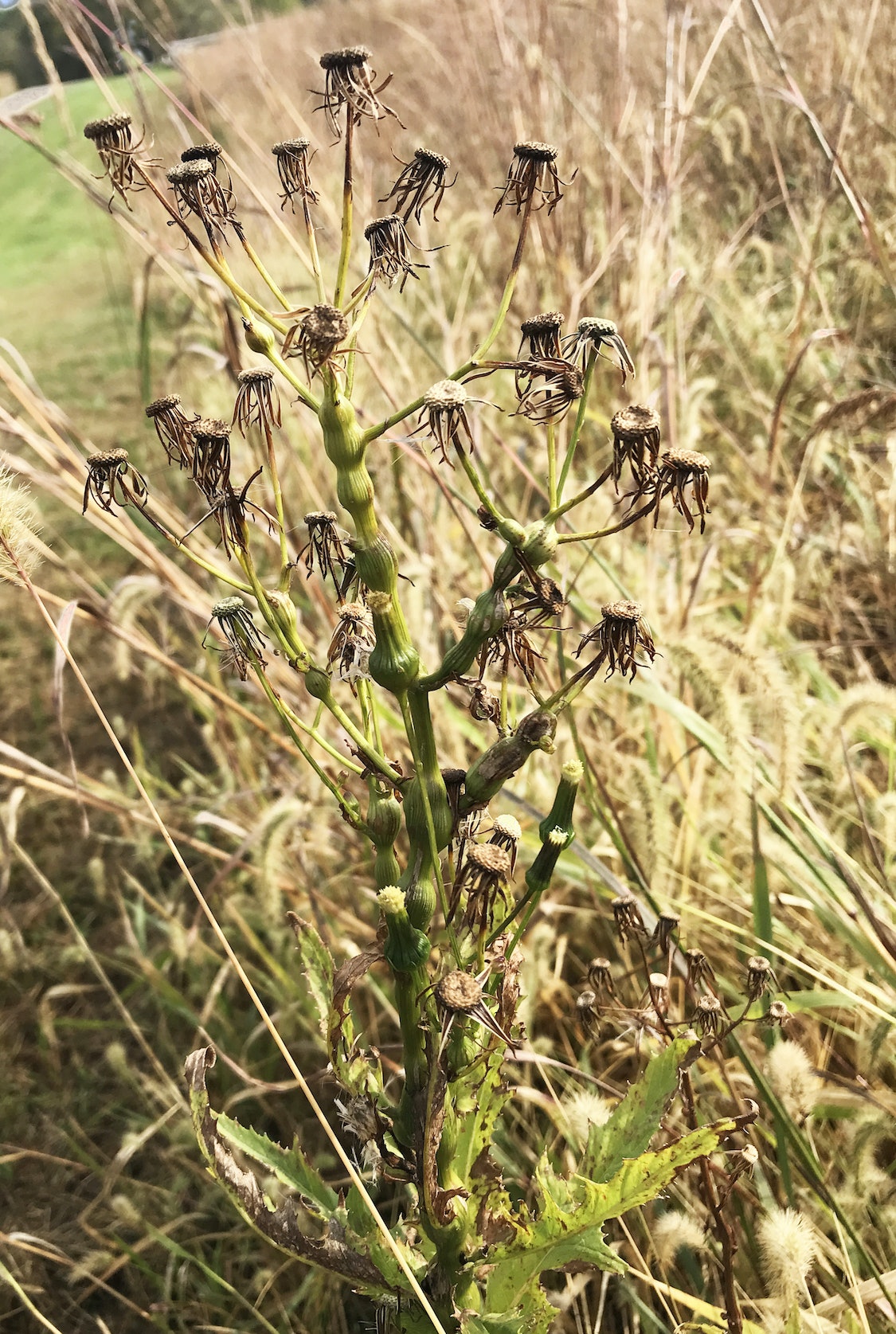 Now a few side notes. First of all, burnweed is an edible plant when leaves are young and tender—well technically so. It is not poisonous but has rather a strong flavor. Small nips of it as an herbal flavoring with mangoes, peaches, and/or tomatoes is appreciated by some. If you like cooked greens, you might try the young tender leaves sauteed as you would young spinach, though the taste is said to be strong.

While indigenous peoples did not often use this plant as food, it was used medicinally. A strong decoction was used to treat poison ivy rash. Its oil was used to treat wounds and the aforementioned “piles.” None of the early uses have made it into modern medicinal use.

Burnweed competes with some crops and is often considered a weed in pastures and hay fields. For replanted prairie areas, it is expected to decline on its own. Otherwise, it is considered relatively benign and is easy to pull up as it has shallow roots and a short, brittle taproot.

For more details about it, Minnesota Wildflowers and Minnesota Seasons are a couple of good resources:

We will end with a photo of the soft beauty as the breeze releases the seeds to their destiny. Too beautiful for me to call it a weed, so enjoy it while it lasts. 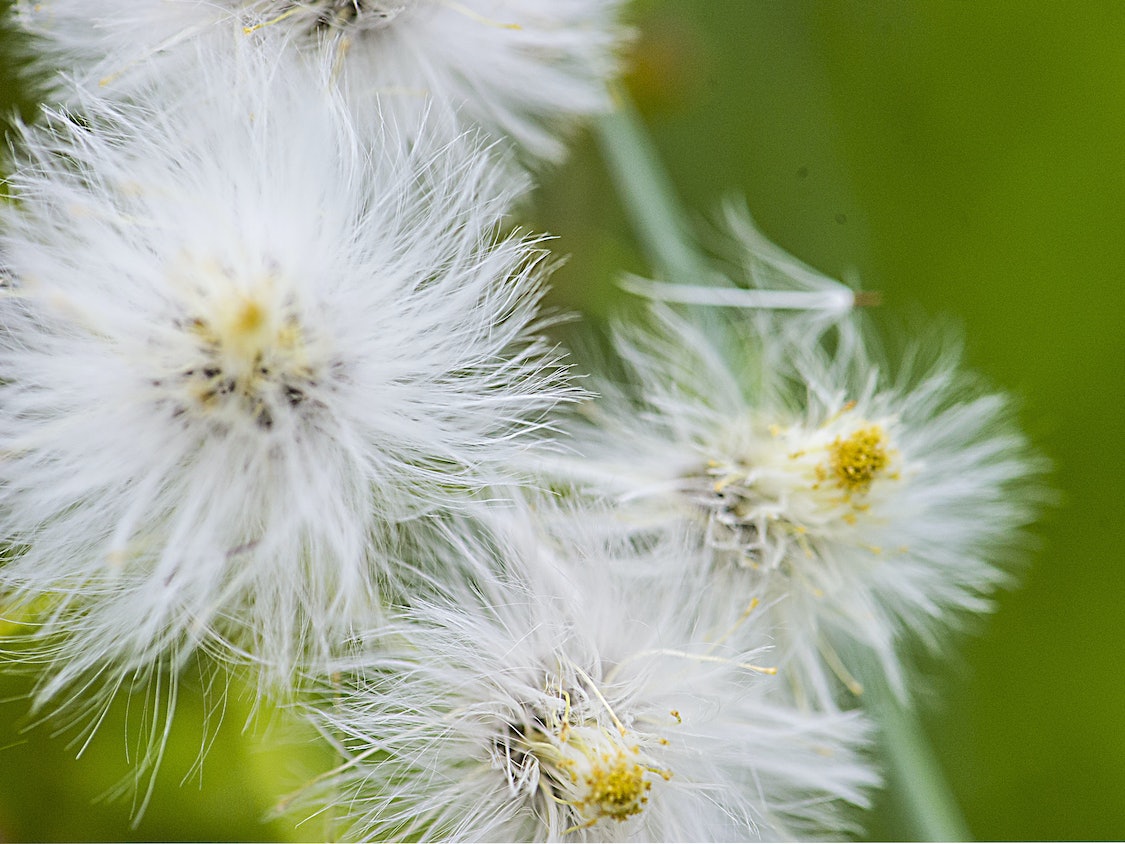