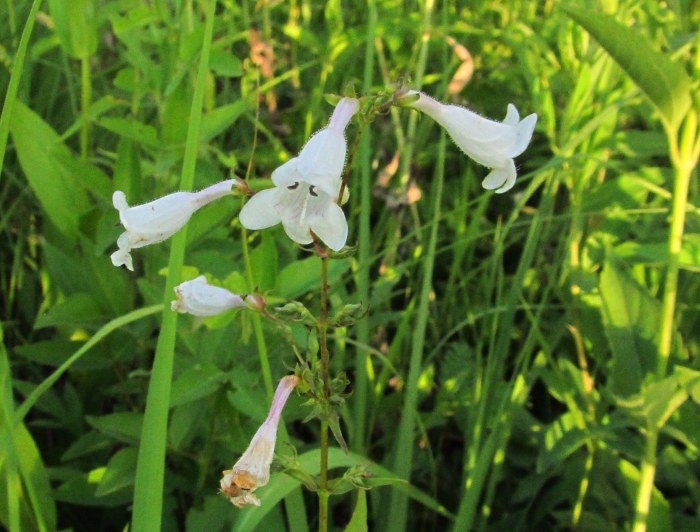 Today's featured wildflower is easy to cultivate in gardens and has a "rather long" blooming period for a plant that flowers in the early summer. Foxglove beardtongue (Penstemon digitalis), also known as smooth white beardtongue or foxglove penstemon, is native to most of the U.S. east of the Rocky Mountains. Its large flowers (usually white, sometimes shades of pink or lavender) attract a wide range of pollinators.

The Illinois Wildflowers and Minnesota Wildflowers websites are good resources for botanically accurate descriptions of foxglove beardtongue foliage and flowers.

The classic book Wildflowers of Iowa Woodlands by Sylvan Runkel and Alvin Bull explains that Penstemon species are commonly called beardtongue because “One of the five stamens is sterile and does not produce pollen. It is often modified into a hairy or bearded tongue and probably attracts insects.”

Some of these species are difficult to distinguish from one another. The most similar to foxglove beardtongue is pale beardtongue (Penstemon pallidus). Minnesota Wildflowers notes that species "has smaller flowers and hairy leaves and stems where Foxglove Beardtongue is hairless except for the flowers." Illinois Wildflowers writes that pale beardtongue is "more dainty in appearance than its taller and more aggressive cousin," foxglove penstemon, has a "distinctively ridged" lower interior surface, and a lower lip that "extends significantly beyond the upper lip."

The talented southeast Iowa photographer Don Weiss gave me permission to publish this comparison he created. Photos on the left depict foxglove or smooth beardtongue, while pale beardtongue is on the right. 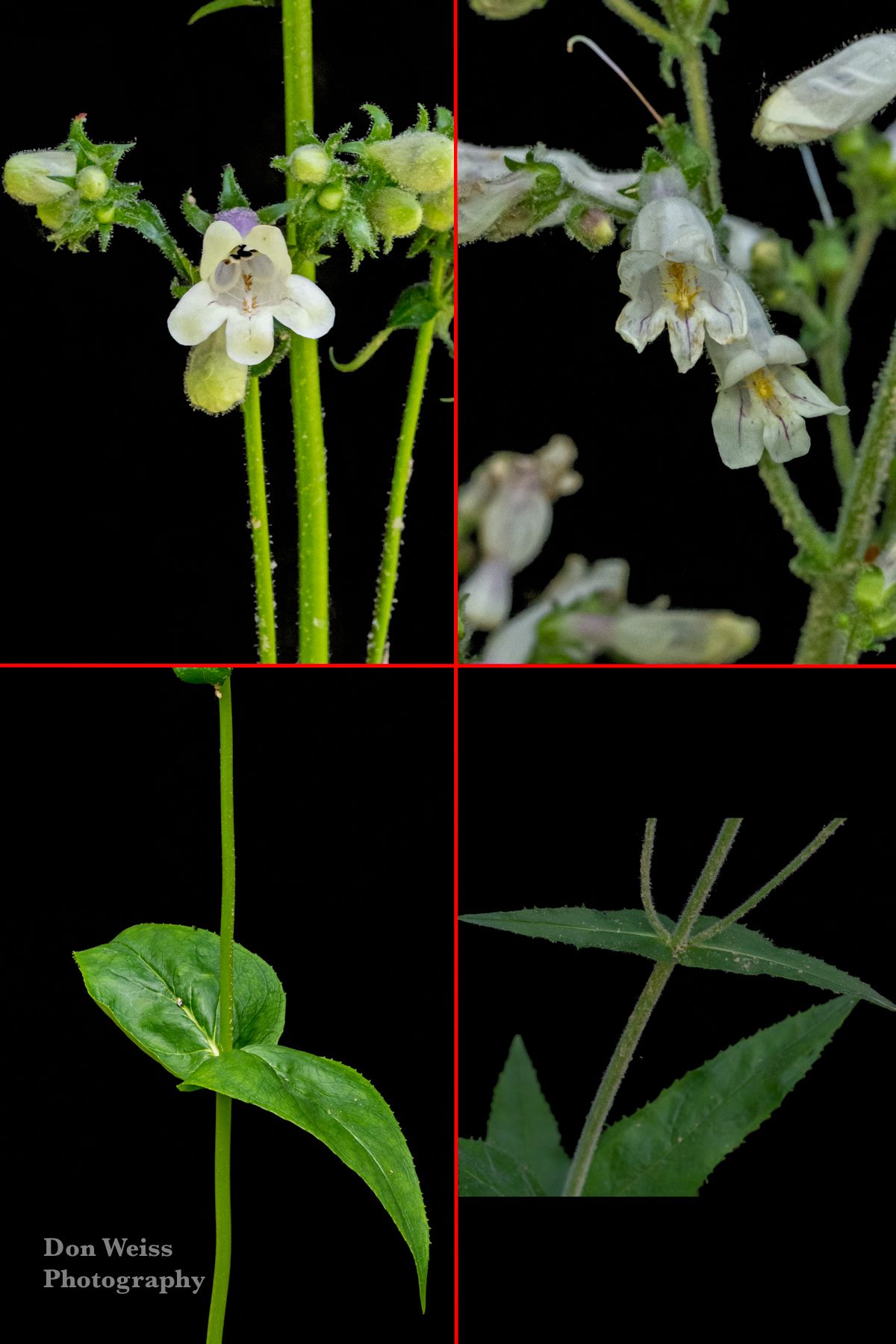 I took this picture a few summers ago at Mike Delaney's restored prairie in Dallas County. Foxglove beardtongue often blooms in May and June, but I caught this plant flowering in early July. Near the lower right corner, you can see seed pods starting to develop where earlier blossoms have finished. 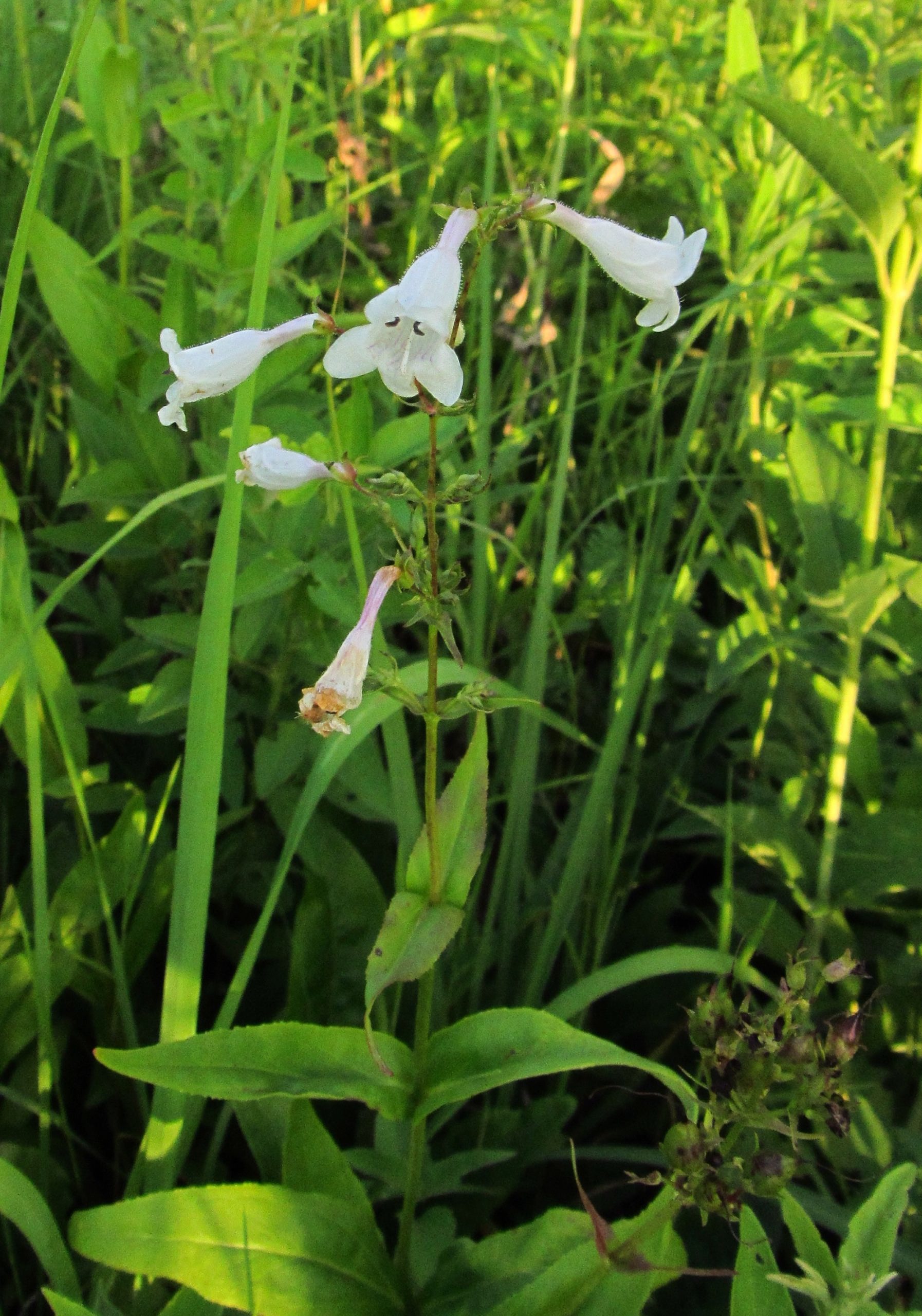 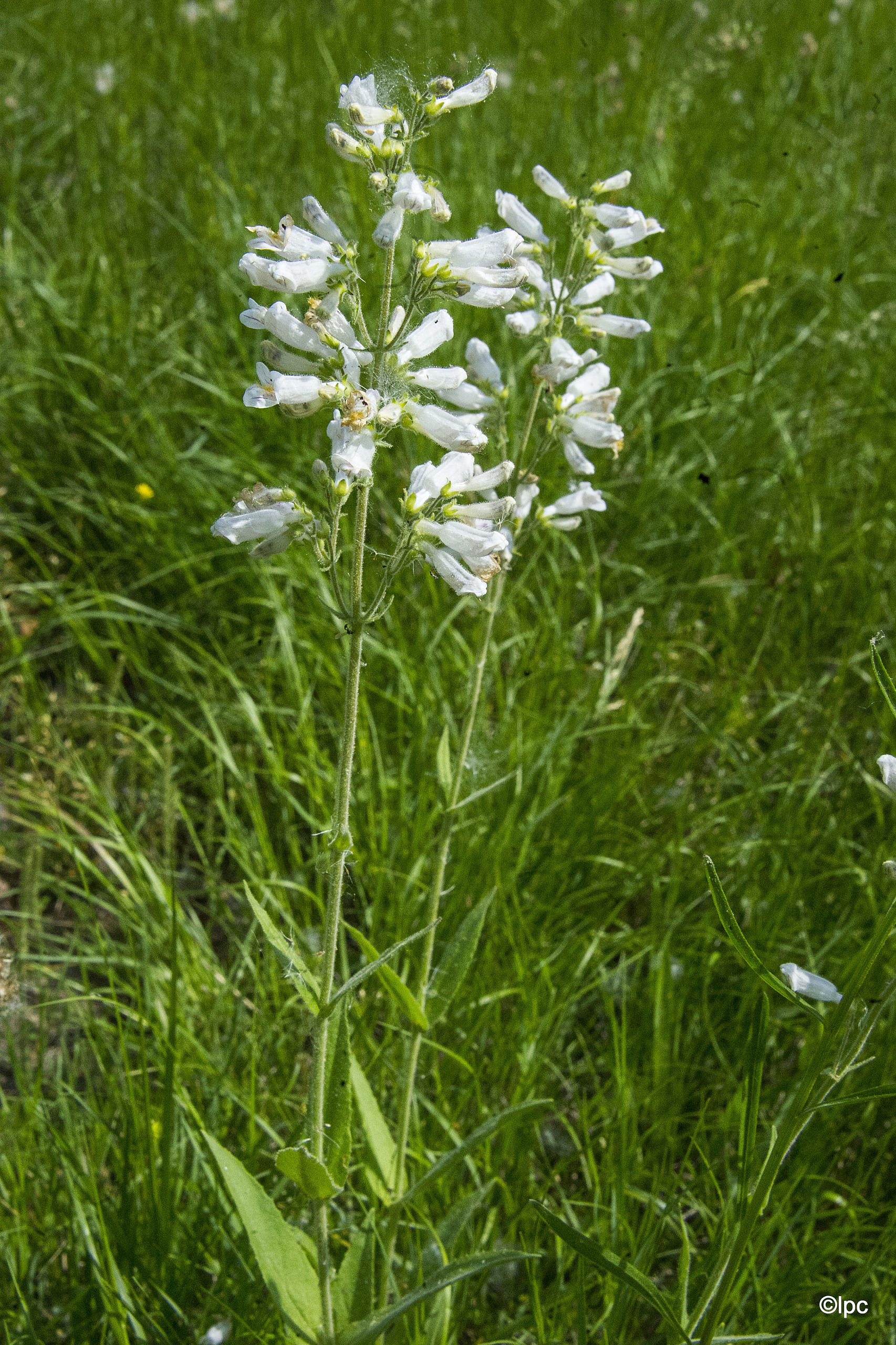 Flowers open or on the verge of opening: 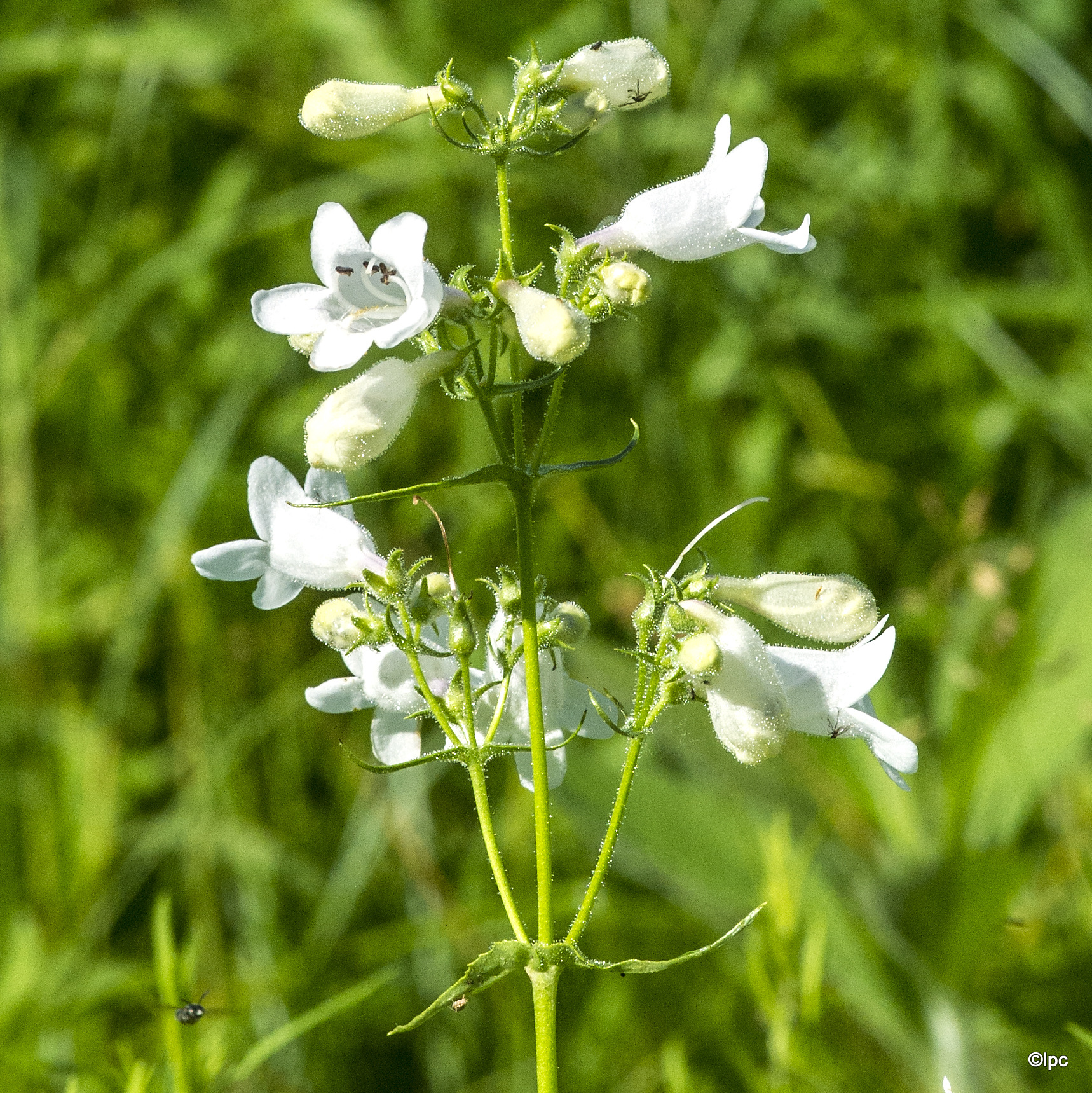 Lora zeroed in on features that can help identify foxglove beardtongue. Here is a close look at where the opposite leaves attach to the stem. 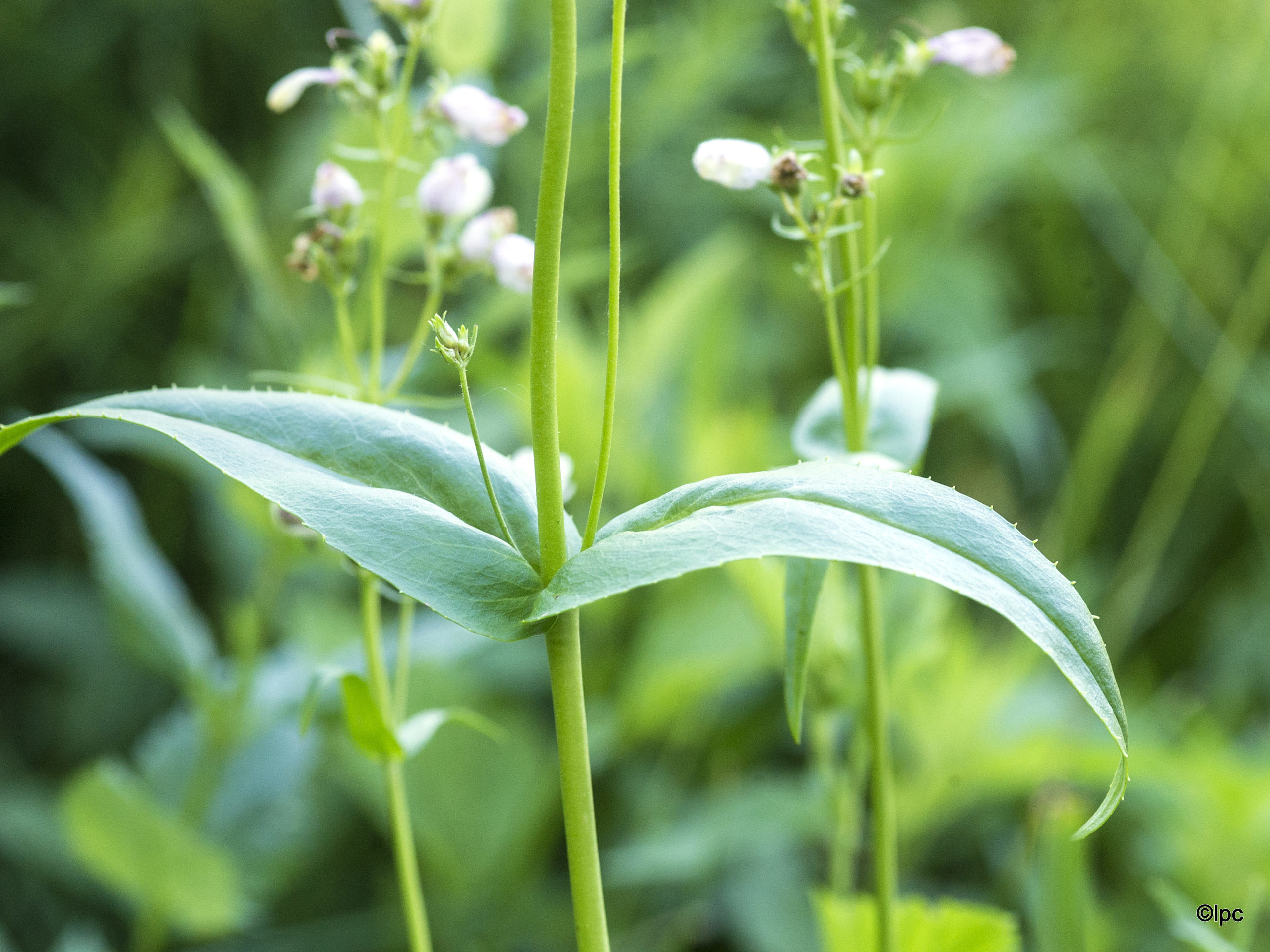 Inside of flower lip: 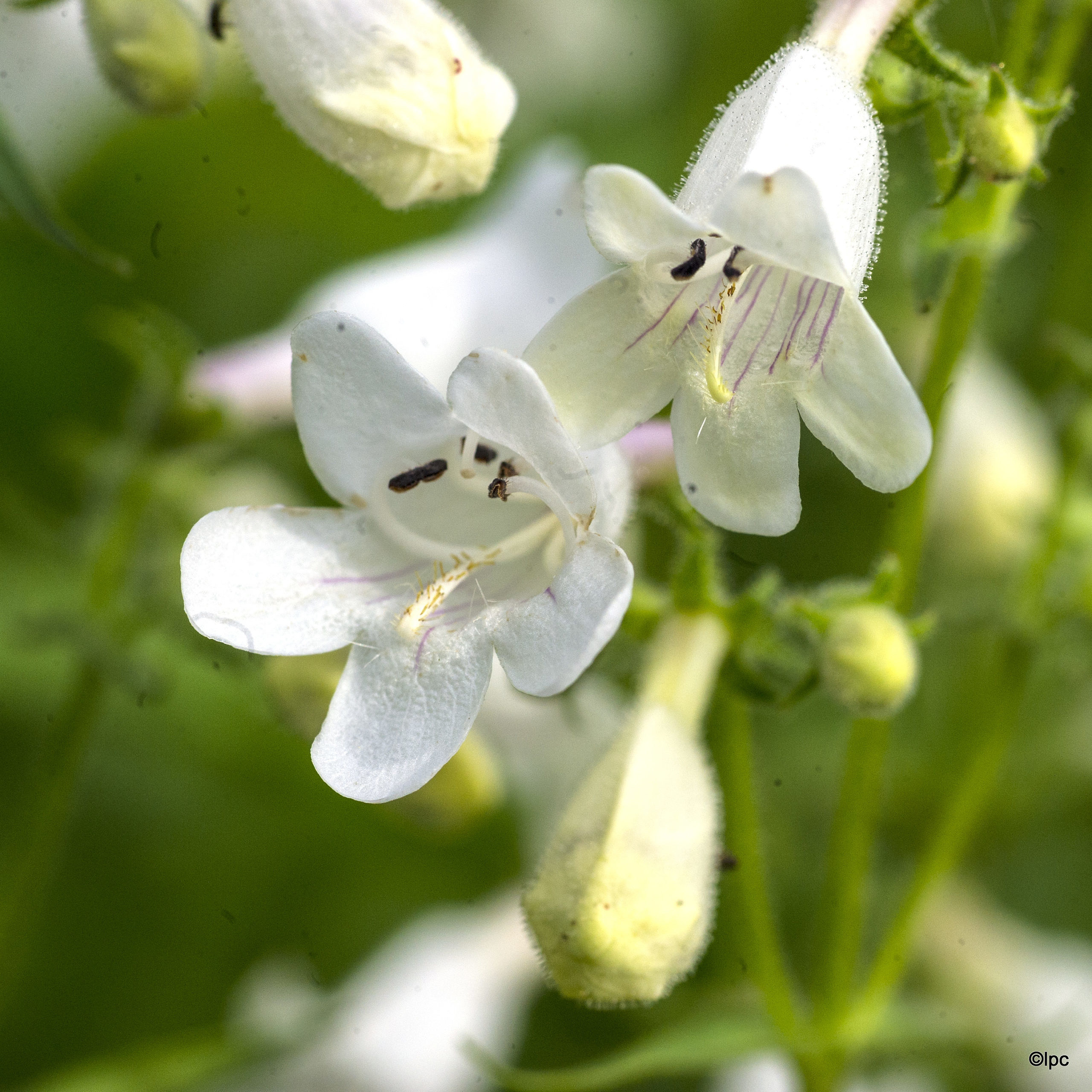 The stripes (also found on some other wildflowers, such as violets) point pollinators toward the nectar. 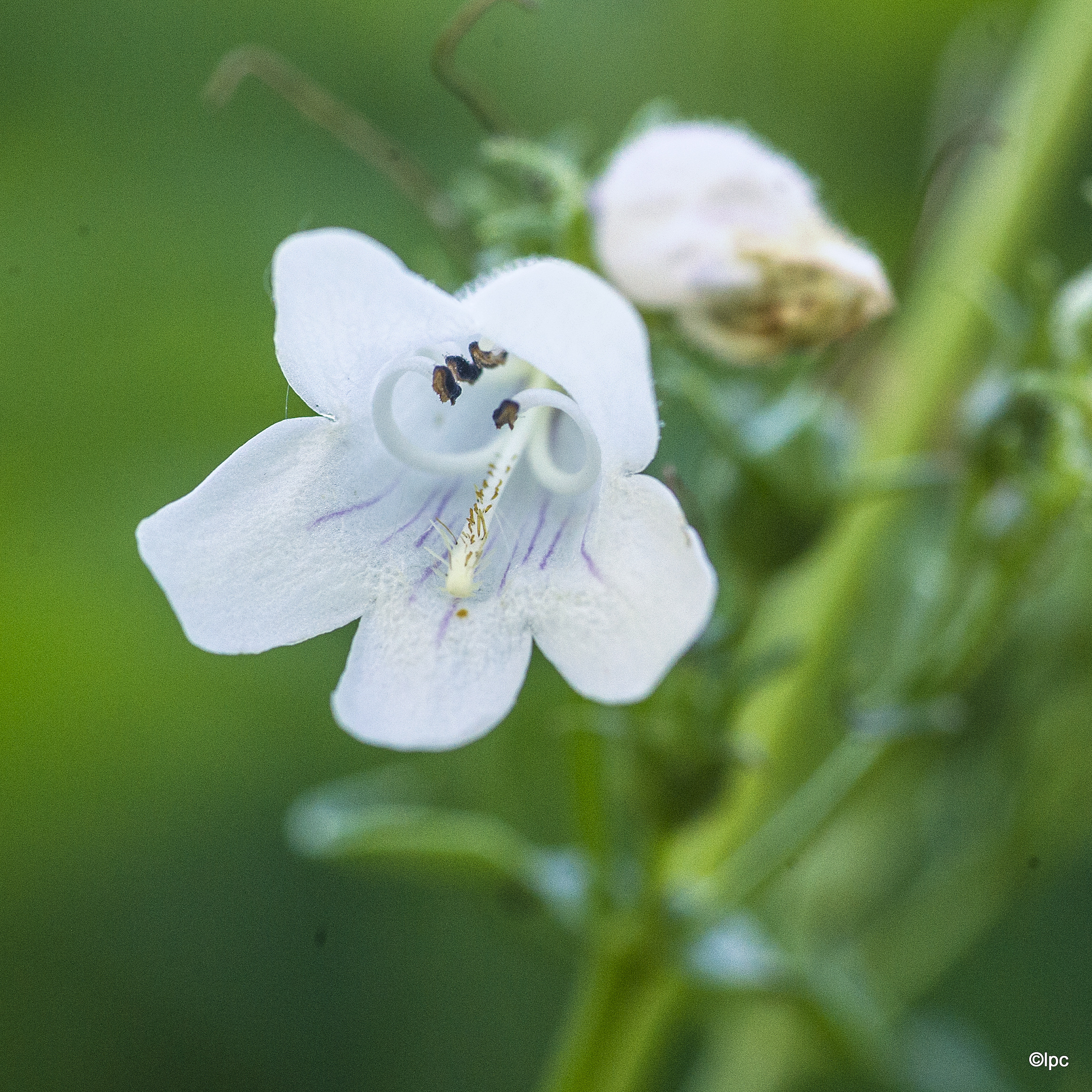 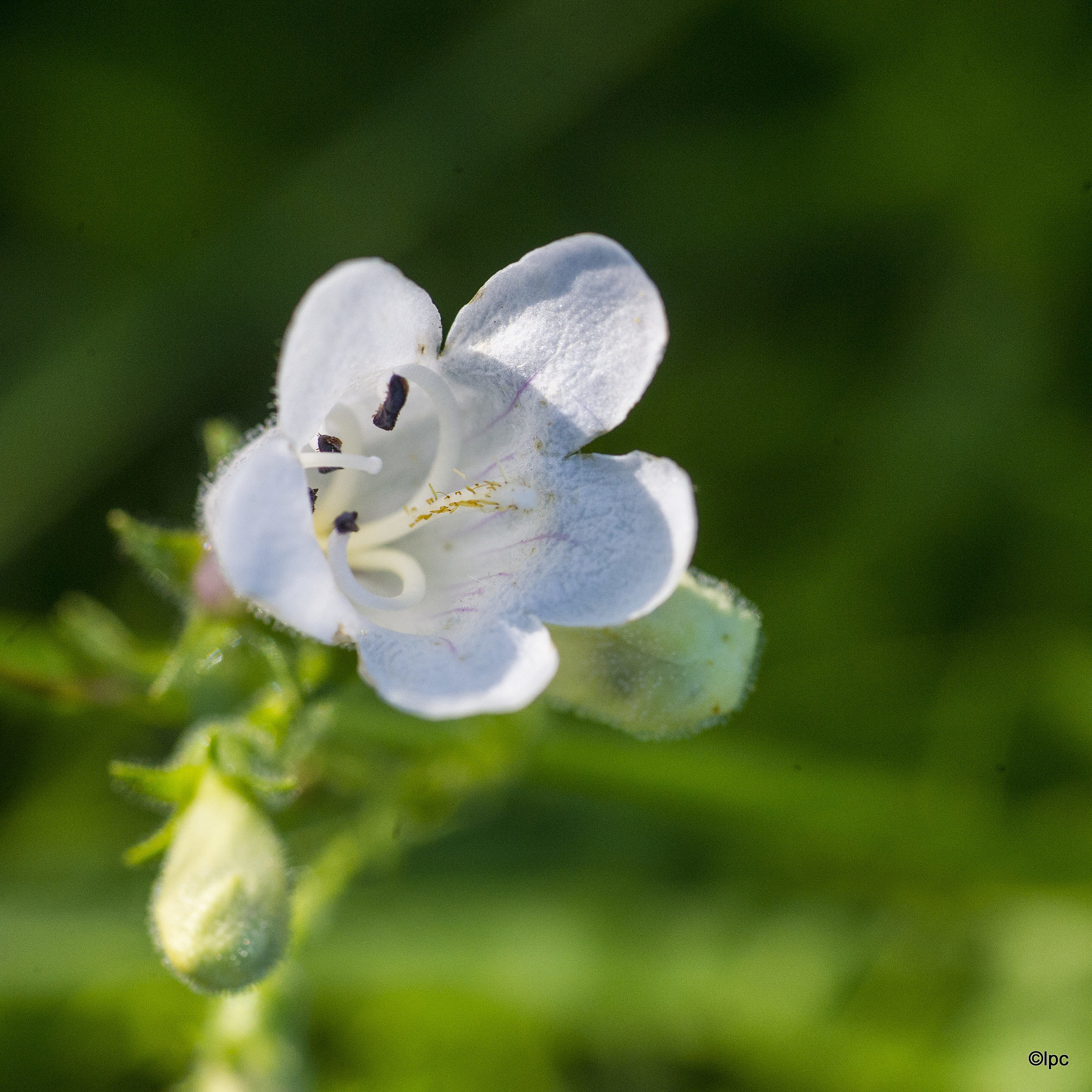 As Illinois Wildflowers says, "The entire plant is hairless, except on the outer surface of the flowers." Lora manaaged to capture those delicate hairs on the surface. 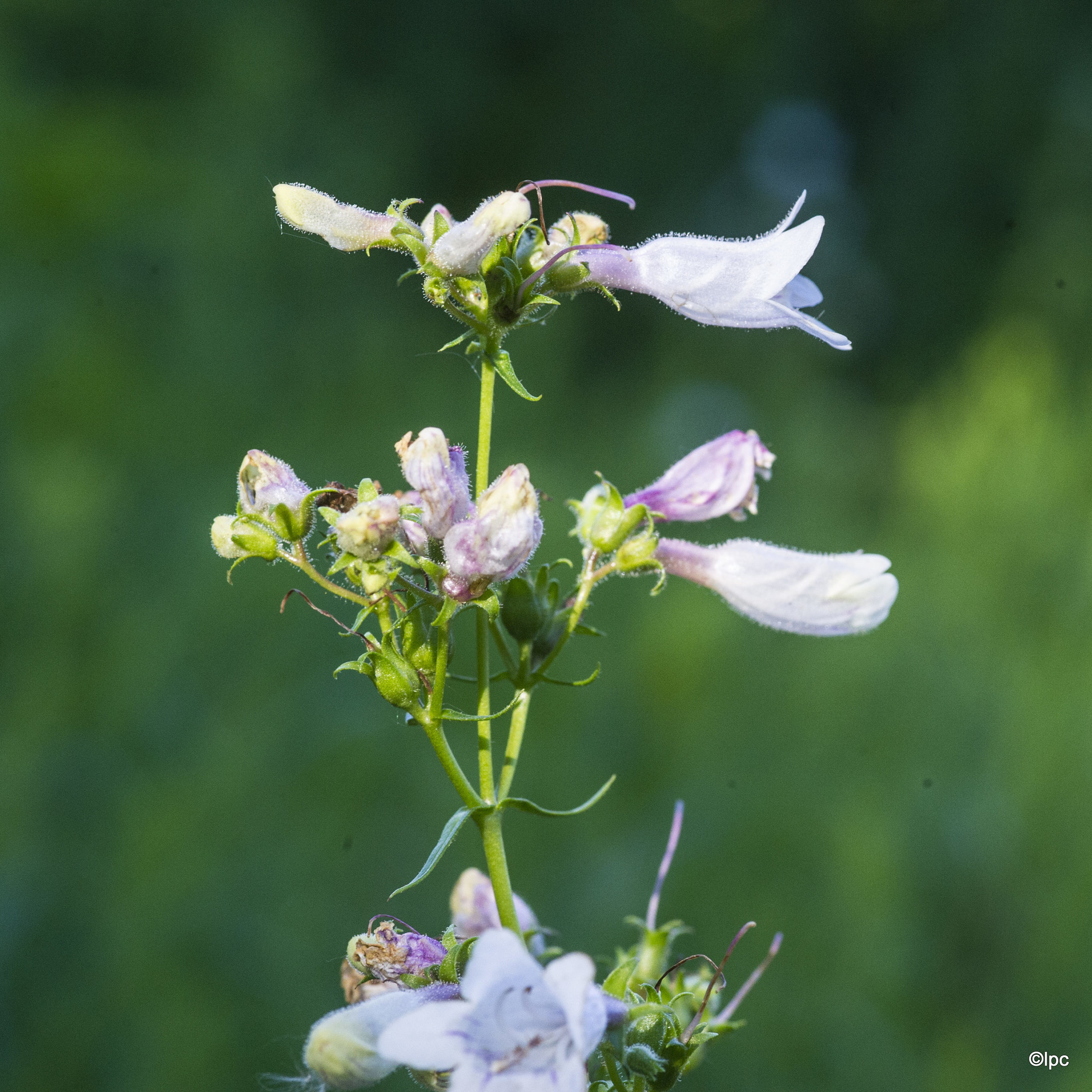 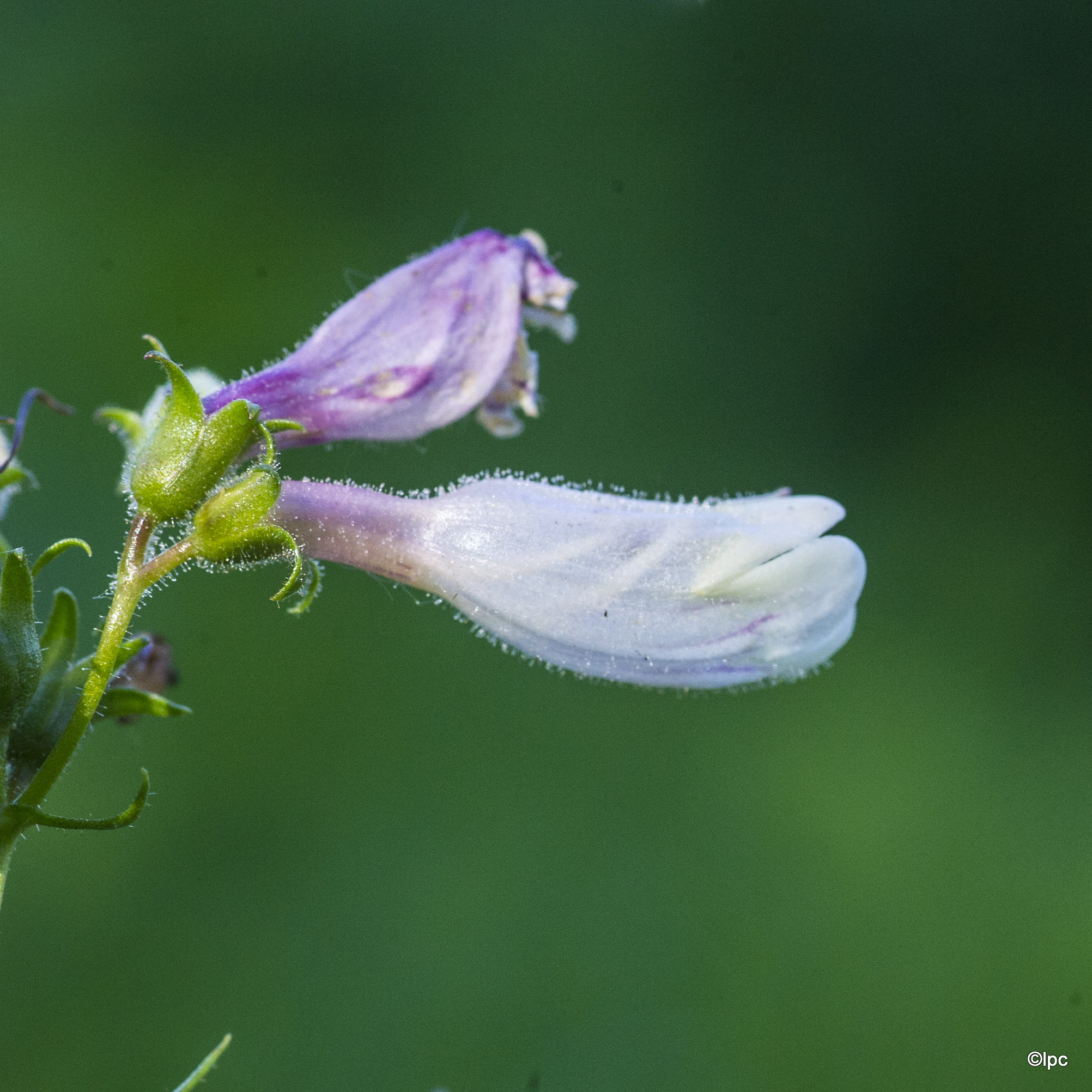 The last two photographs come courtesy of Emilene Leone, who has been planting meadow strips in her Scott County yard. Here's a small colony of foxglove beardtongue: 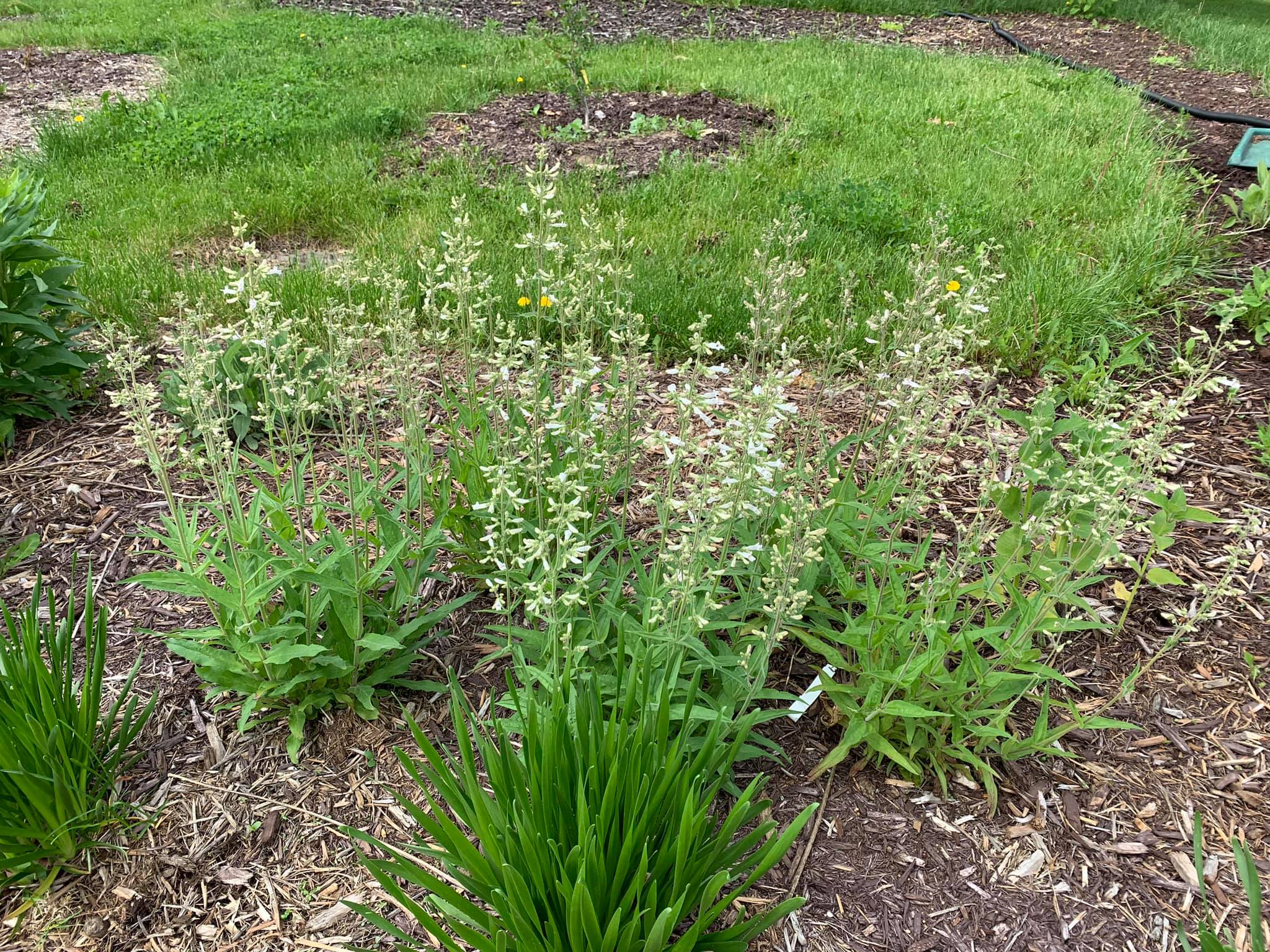 The purple flowers in this shot are spiderwort, and I believe the bright yellow blossoms are lanceleaf coreopsis or sand coreopsis: 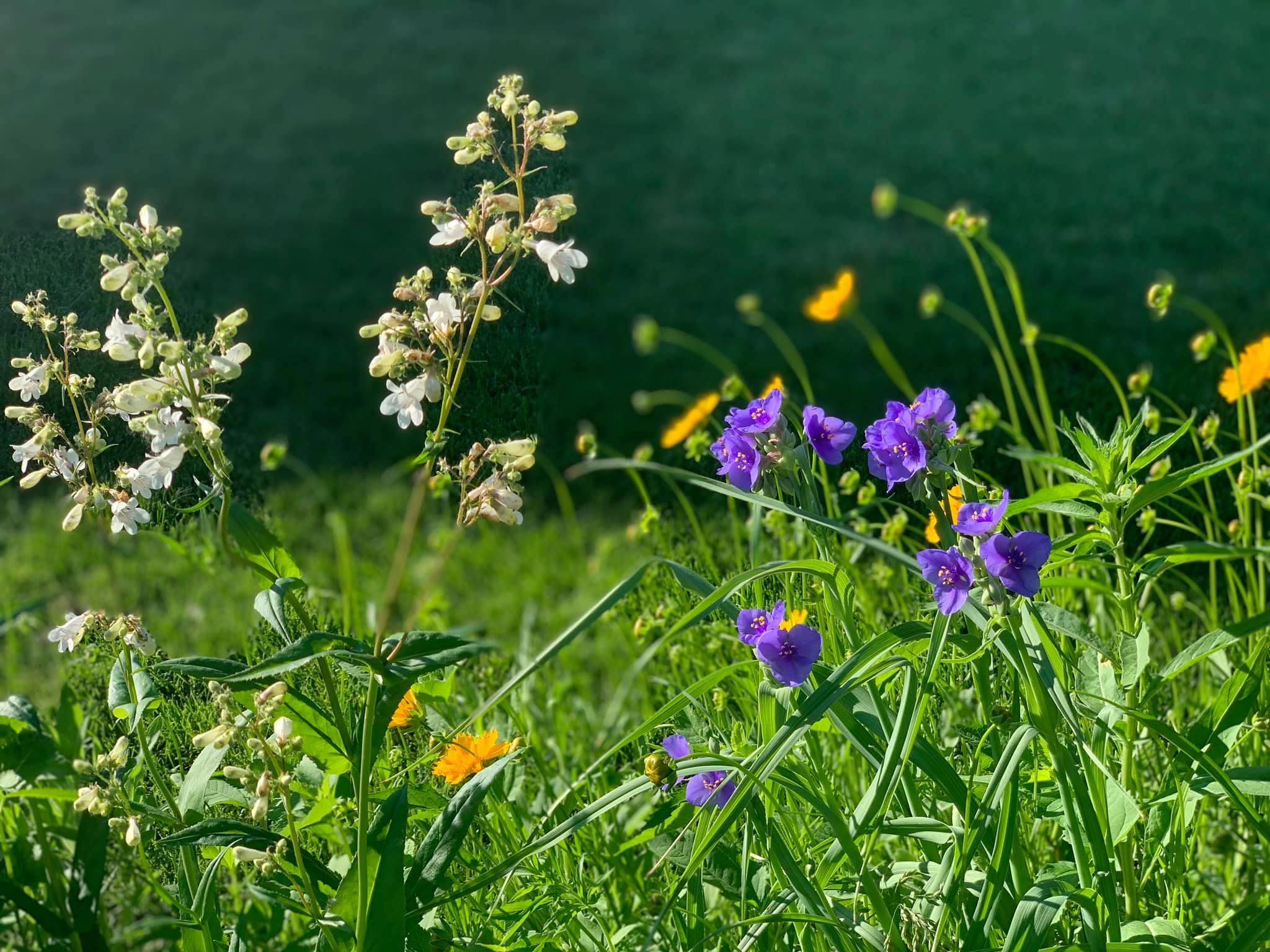