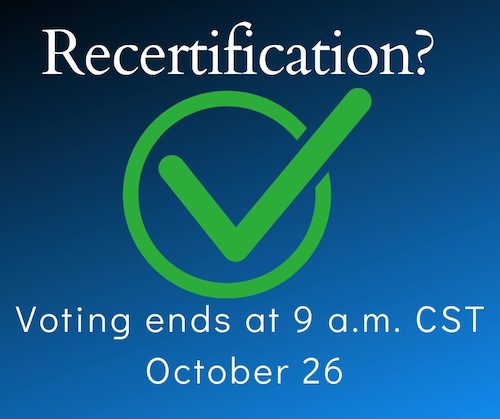 When Iowa Republicans eviscerated public sector bargaining rights in 2017, they hoped to break the state’s largest labor organizations by creating new barriers to union representation. The law requires public employees to recertify their union in each contract period, which is usually two or three years. To be recertified, the union needs a majority of all employees in the bargaining unit to vote “yes.” Anyone who does not vote in the recertification election is deemed to be a vote against the union.

No members of Congress or statewide officials could be elected in Iowa if candidates needed a majority of all eligible voters to win, and non-voters counted against each candidate.

But for five years in a row, Iowa’s largest public-sector unions have won an overwhelming majority of the recertification votes. The Iowa State Education Association (ISEA) announced on October 26 that recertification passed in all 78 of its bargaining units that held elections this year.

Those associations have more than 11,000 employees combined and include large school districts (Johnston, Linn-Mar, West Des Moines, Southeast Polk) as well as small ones (Hamburg in the state’s southeast corner, with around 150 students enrolled). Educators want union representation not only in blue counties but all over Iowa, even in the most heavily Republican areas (Boyden-Hull in Sioux County).

The law has forced labor organizations to spend resources every year on recertification campaigns, but it has not meaningfully reduced union representation of Iowa’s public employees. In a statement, ISEA President Mike Beranek hailed the “strong and determined professionals who will not back down from what they know is best for their profession, their students, and their schools which is representation at the bargaining table, in classrooms, and in the profession.”

I’ve enclosed below the full list of education associations that recertified this month.

“We are enormously proud of the thousands of education professionals who overwhelmingly voted in favor of their professions by successfully passing recertification in their locals.

ISEA members and their colleagues took time out of their busy schedules –despite a myriad of distractions and worries currently consuming their workplaces, to vote in favor of recertification. The votes today – and since the law passed in 2017 continue to loudly and firmly tell the Iowa Legislature and the Governor that public employees want their collective voice represented by their union.

More than 11,000 public education employees in 78 local associations were impacted by this vote.  After the two-week period of recertification, 100 percent of ISEA locals successfully voted to retain the ability to collectively negotiate a Master Contract!

Iowa’s anti-union bill passed by the Republicans in the statehouse in 2017 requires a 50 percent plus 1 majority of all employees covered by the bargaining unit to win recertification and anyone who fails to participate in the election is automatically counted as a “no” vote.  Despite this onerous standard, 78 out of 78 ISEA locals passed their recertification elections.

This is the fifth year of recertification elections, and the fifth year of sweeping victories. Requiring a local association to vote at the end of every contract is just another obstacle the legislature placed in front of Iowa’s public employee unions in an attempt to weaken our strength. Once again, this obstacle was overcome by the strong and determined professionals who will not back down from what they know is best for their profession, their students, and their schools which is representation at the bargaining table, in classrooms, and in the profession.

The ISEA represents preK-12 educators, education support professionals, community college faculty, Area Education Agency professionals, retired educators, and aspiring educators with contracts covering more than 50,000 employees. We promote quality public education by placing students at the center of everything we do while advocating for education professionals.

Appendix 2: List provided by the Iowa State Education Association of the 78 locals that recertified in October 2021