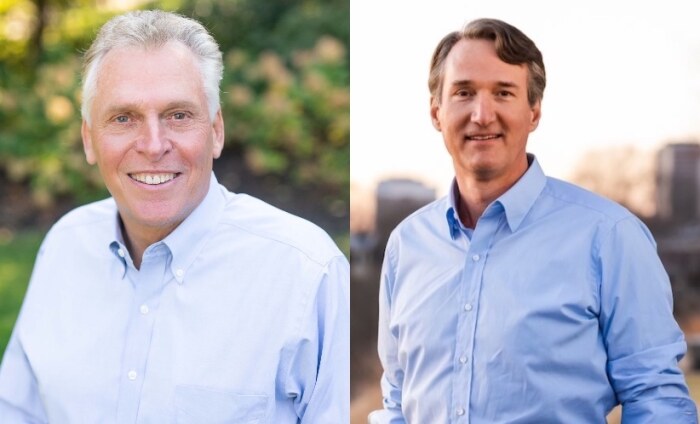 A Virginia election with national implications

Dan Guild: Themes from the Virginia governor's race will likely dominate the 2022 midterms across the country.

Ahead of the November 2 elections, I want to explain why the governor's race in Virginia will tell us much about President Joe Biden and the outlook for Democrats. It is worth remembering that in September, the Democrats decisively beat back a recall effort in California. The result there suggested little had changed in the state since last November's election.

However, the president's job approval ratings have declined further over the past six weeks.

This chart shows the weekly average of president approval and disapproval. The first full week after the evacuation of Afghanistan was August 22. Not surprisingly, that is the first week Biden's disapproval exceeded his approval. 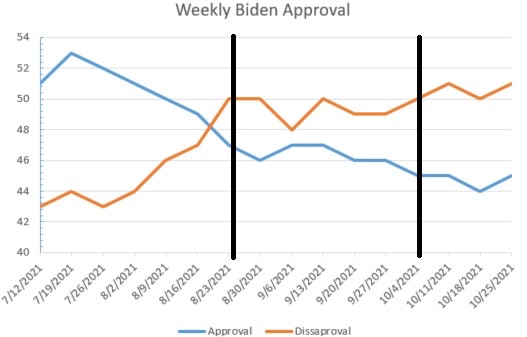 There is a second break point at the start of October. The reason for this is unclear. It might be rising gas prices and inflation generally. It might be the length and unorganized negotiations over the Build Back Better bill, containing much of Biden's agenda. Whatever the cause, the result is Biden's approval is now decidedly negative.

What is not clear is how negative it is. In my work I have found a significant divergence between online and telephone polls, which others have found as well.

Most disturbingly, the source of this decline is easy to identify. Biden's numbers among independents clearly dropped significantly after the Afghanistan withdrawal. The decline among independents in Virginia has made the race a tossup in polling. 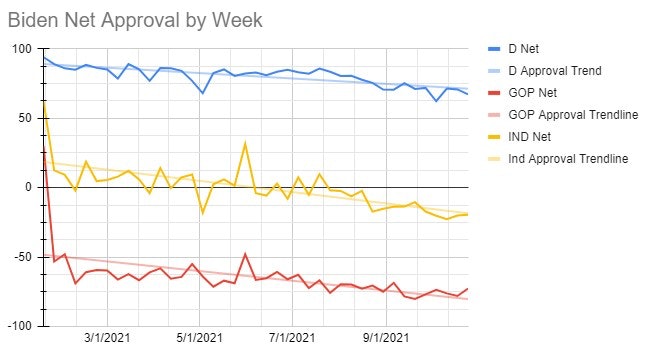 Beyond independents, the national numbers suggest Biden's approval has declined the among those under age 34. The size of this decline is stunning: in a Quinnipiac poll Biden has a 34 percent approve/48 percent disapprove rating among a group that he won by nearly 20 points in 2020. All pollsters have found significant declines among young people, though they differ in size.

When you compare the Virginia polling to recent national polling, you find something interesting: Biden's approval is less than you would expect given his national approval.

The top of the table performs this calculation, and estimates Biden's approval should be 47.75 percent. But recent Virginia polling finds his approval lower than that, sometimes significantly lower. 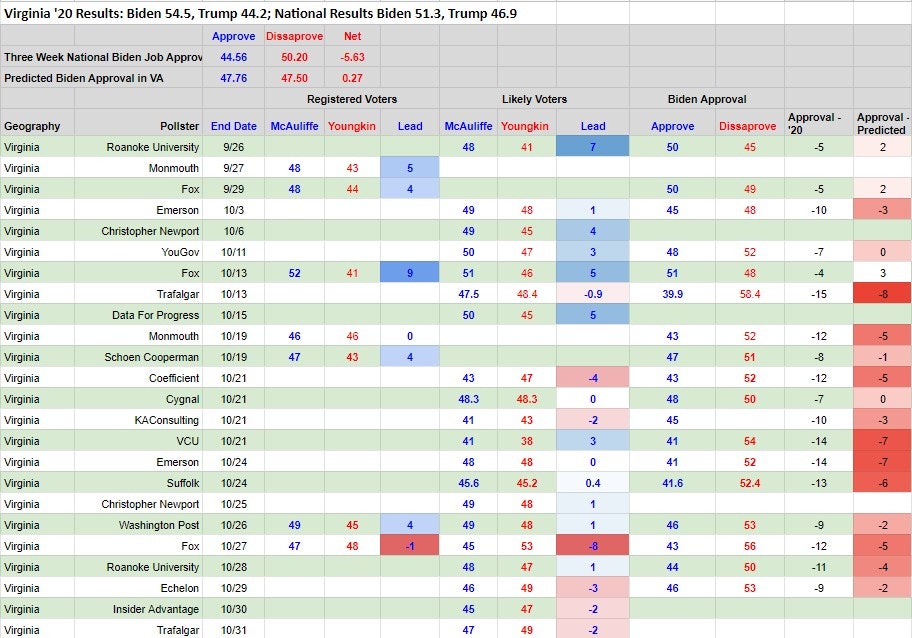 There may be a number of reasons for this. We know from recent surveys that Republicans are more excited than Democrats and are more likely to vote. But this is a double-edged sword. One lesson 2020 taught was about "non-response bias." When one party is excited, they are more likely to answer the phone. The result: flawed polling. This was a clear problem last year and it may be a problem in Virginia now. I would note in this regard that almost all of the surveys in Virginia have been conducted by telephone, which we know is far more susceptible to non-response bias.

One sees in this chart the effect in some polling of Biden's decline on the Virginia race. For example, Fox had McAullife up 51-46 on October 13 and found Biden's job approval nearly identical (51-48). Two weeks later, they found Biden's job approval had worsened significantly (43-56) and that McAulliffe trailed by 8. Roanoke and Emerson found similar trends with similar implications for the Virginia Senate race.

But another, far more disturbing reason may be the issues are more engaged in Virginia than they are in the rest of the country. That is, Virginia voters are seeing messages that differ from the national discussion, but those themes will likely dominate the 2022 midterms. In this sense Virginia is a laboratory, much like the Iowa caucuses are in presidential primaries.

The most recent polling suggests a Republican victory. But as the table below shows, polling of past governor's races in Virginia include some pretty bad misses. 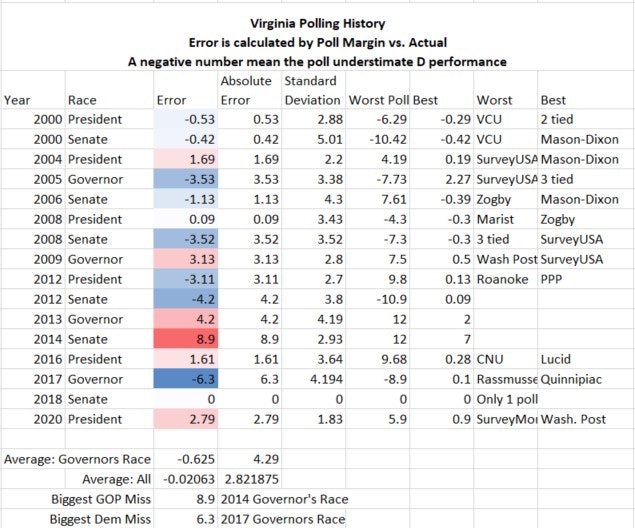 I still see McAuliffe as the favorite, because in the end I think enough Democrats will vote. But anything is possible.

What I can predict with certainty is that the result will affect messaging by both parties next year.