Which southeast Iowa Republican will be the odd man out?

But not so fast! Former State Senator Mark Chelgren told the Ottumwa Courier on November 4 that he plans to run in the empty House district 26.

It's the second attempted comeback for Chelgren, who served two terms in the district containing Ottumwa before retiring in 2018. He sought the GOP nomination for this year's special election to replace Mariannette Miller-Meeks, who left the Iowa Senate to serve in Congress. But at a district convention, local Republicans preferred Dickey, who had been recruited by party leaders.

To my knowledge, neither Shipley nor Mitchell has publicly announced their plans.

Chelgren's win by ten votes in the 2010 GOP landslide looked like a fluke at the time. In retrospect, that race was the canary in the coal mine for Democrats in southeast Iowa.

Over the past ten years, Democrats have lost several other state House or Senate districts in the area. Chelgren was re-elected by 374 votes in 2014. When he retired, Miller-Meeks kept the seat in Republican hands by 808 votes in 2018. First-time candidate Dickey won this year's special election by nearly 1,000 votes despite a snowstorm suppressing election day turnout.

Shipley ran unsuccessfully for the House in 2014 but defeated Democratic State Representative Phil Miller by 37 votes four years later, when neither party targeted his race. Democrats had high hopes for taking Shipley down in 2020, but he beat Miller in a rematch by 166 votes.

Mitchell had an easier path to the legislature. One of the youngest people ever elected to the Iowa House, he won his first race in 2018 while still a Drake University undergraduate. That year, Mitchell prevailed by 110 votes in a low-turnout four-way primary to replace a retiring Republican lawmaker. He won the general election comfortably in what was a strong district for the GOP.

As mentioned above, Shipley and Mitchell both live in the new House district 87. Moving up to the Senate is not a realistic option, since two GOP incumbents already live in the new Senate district 44, which stretches from Oskaloosa through Fairfield and over to Mount Pleasant.

I don't have current voter registration numbers for Iowa's new legislative districts, but Josh Hughes created maps on Dave's Redistricting App that show recent voting history for all of the new Iowa House and Senate districts.

House district 26 is by far the safer bet for a Republican candidate. It covers all of Davis and Monroe counties, most of Appanoose County, and parts of Wapello County—but not the city of Ottumwa. 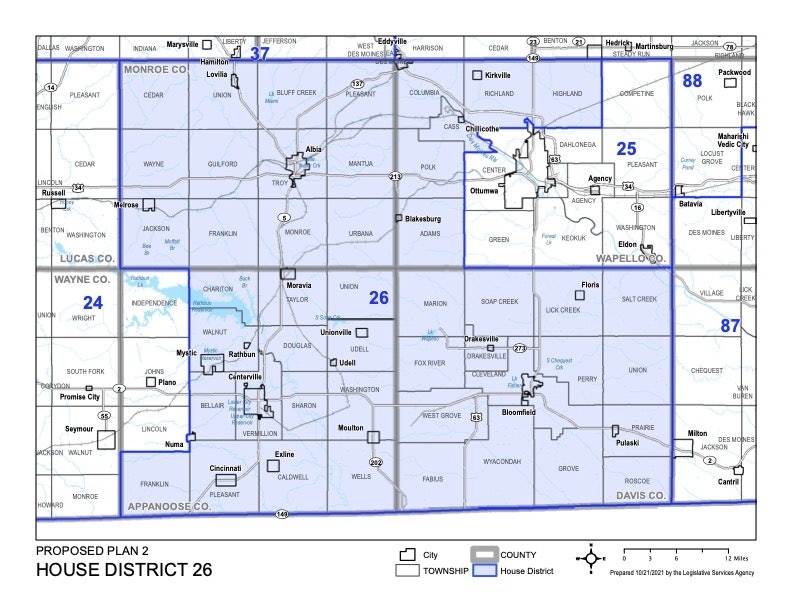 In other words, the winner of the GOP primary is extremely likely to be the next state representative. Shipley could move here and run against Chelgren. Both have previously represented Davis County. Neither is a favorite of Republican leaders in Des Moines. Shipley is a darling of the anti-vaccine crowd and has been one of the loudest opponents of COVID-19 mitigation practices, which would be a strength in a primary.

Chelgren has had a longer political career and before that, created a successful business. On the other hand, he drew bad press after NBC News reported in 2017 that he had inflated his educational credentials. 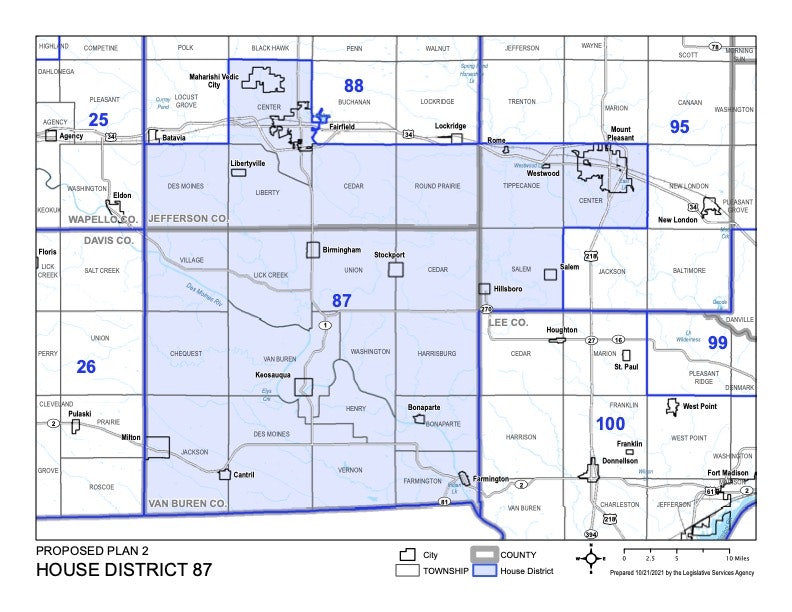 Shipley currently represents the Jefferson and Van Buren portions of this district, where about two-thirds of its residents live. That could give him an edge over Mitchell, who represents just the Henry County portion.

But GOP leaders might help Mitchell in a primary; he's already an assistant Iowa House majority leader in his second term. In contrast, they didn't put Shipley in charge of a House committee. Instead, he's vice chair of the Labor panel.

Whoever wins the 2022 primary would be slightly favored in the general election, but not a lock. According to Josh Hughes' map in Dave's Redistricting App, voting patterns in the new House district 87 lean Republican but are closer to Iowa's recent statewide results. Trump received 53.5 percent of the vote in 2016 and 57.4 percent in 2020, Reynolds 51.5 percent in 2018, and Ernst 52.6 percent in 2020. Democrats would likely invest in this House race, if they recruited a strong candidate.

I'll update this post as needed when Shipley and Mitchell clarify their plans.

UPDATE: Shipley confirmed in Novembern and Mitchell in January that they will seek re-election in House district 87.