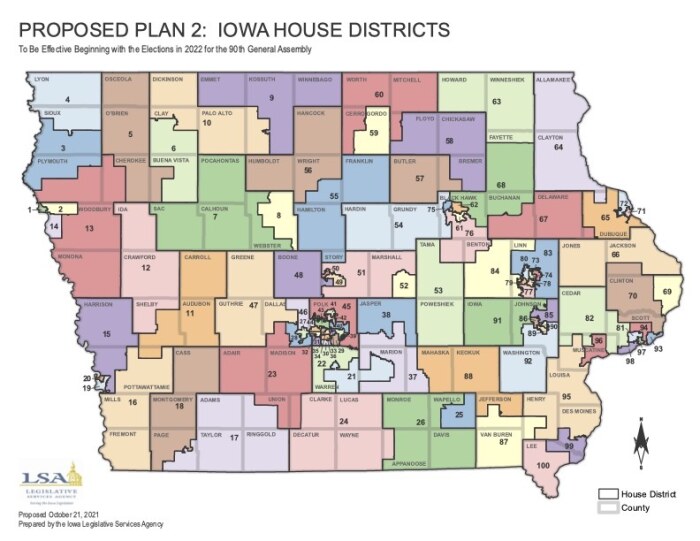 Iowa lawmakers overwhelmingly approved the Legislative Services Agency's second redistricting plan on October 28, by 48 votes to 1 in the Iowa Senate and 93 votes to 2 in the House. Democrats had already committed to approving any nonpartisan maps. Republicans liked that this plan (unlike the first LSA proposal) creates four U.S. House districts that Donald Trump carried. It also gives the party an excellent chance to maintain their Iowa House and Senate majorities.

Republican State Senator Ken Rozenboom cast the only vote against the maps in the upper chamber. The plan puts him in the same district as his GOP colleague Adrian Dickey.

In the lower chamber, only GOP State Representatives Tom Jeneary and Jon Jacobsen voted against the redistricting plan. Both are placed in House districts with other Republican incumbents, but Jacobsen told Bleeding Heartland in a telephone interview that's not why he opposed the plan. Rather, he said the legislative maps carve up Pottawattamie County outside Council Bluffs into several districts represented by incumbents who live elsewhere.

I'll have more to say about some legislative districts in forthcoming posts. For now, here are the basics about the plan Governor Kim Reynolds will soon sign into law. UPDATE: The governor signed the bill on November 4.

Evan Burger analyzed this map in terms of population equality, compactness, and partisanship. As he noted, it's mostly a status-quo map, creating three competitive U.S. House districts and one that's safe for Republicans. In a wave year for the GOP, they could sweep all four seats, while Democrats could win three out of four in a good year.

I was hoping lawmakers would pass a technical amendment changing the Congressional district numbers, but they did not. So be prepared for some confusion as most of the old first district is now the second district, and vice versa.

Although Miller-Meeks' home county (Wapello) is located in the new IA-03, I am confident she will move into IA-01 so she can seek re-election on most of the turf where she's been campaigning since she first challenged Dave Loebsack in 2008. She said in an October 28 statement that she will announce her decision "shortly."

Losing Wapello County will be a blow to Miller-Meeks, as she has always overperformed there. On the other hand, she will have incumbency advantages, and the midterm elections usually favor the party out of power in Washington.

Likely Democratic nominee Bohannan has good prospects of improving on 2020 candidate Rita Hart's showing in Johnson County, the second-largest in the district. She's off to a good start on fundraising, though Miller-Meeks has much more cash on hand. Hart outperformed the top of the Democratic ticket in most of the old IA-02 counties, and Bohannan will likely need to do the same.

UPDATE: Kyle Kuehl will also seek the Republican nomination in this district. I doubt Miller-Meeks has anything to worry about.

Bleeding Heartland previewed this race in June, and it's still shaping up to be highly competitive. I anticipate it will one of the most expensive U.S. House races in Iowa history. Trump carried this district by about 51 percent to 47 percent, similar to his winning margin in the old IA-01 last year.

Trump pulled Hinson over the line in her 2020 race against Democratic Representative Abby Finkenauer. Now Hinson has incumbency advantages and is raising lots of money. She should also benefit from Biden's low approval rating. But Mathis has many strengths as a candidate and reported impressive fundraising numbers for the third quarter.

Four Republicans are now competing for the nomination in this toss-up district, which Trump carried by about 0.4 percent in 2020. State Senator Zach Nunn is the favored candidate of Washington, DC Republicans and has raised more money than his GOP rivals. But Nicole Hasso has support from some quarters of the Iowa GOP establishment, and Gary Leffler (better known as the Trump tractor guy) has a lot of connections in the activist and evangelical Christian communities. Former State Representative Mary Ann Hanusa apparently plans to stay in the race, even though her home county (Pottawattamie) is no longer in the district.

For now, Feenstra has no declared opponent. However, Jacob Hall of the conservative website The Iowa Standard indicated during a recent radio appearance that at least one Republican is seriously considering challenging Feenstra in the 2022 primary. Taking on an incumbent is an uphill battle, but Feenstra himself managed to knock off longtime Representative Steve King in 2020.

For reasons discussed here, I expect that Republicans will comfortably maintain their majority (currently 32-18) with this map. 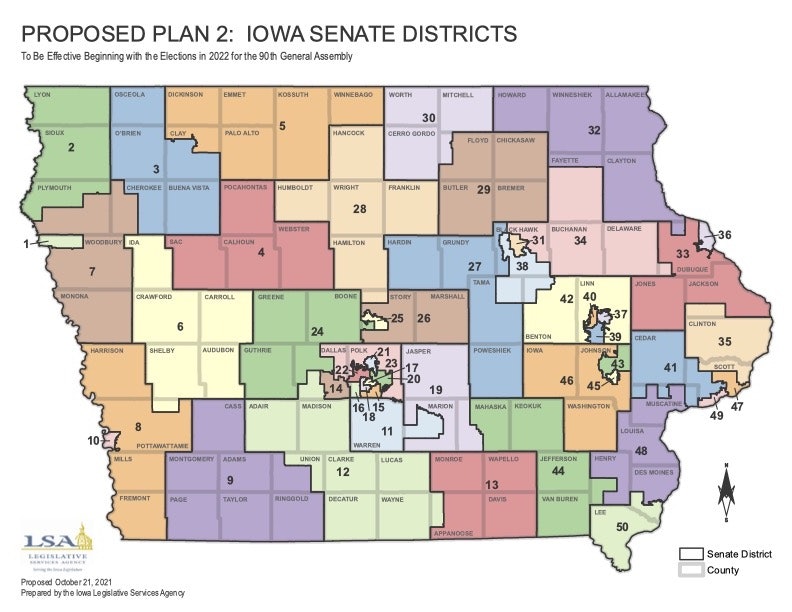 This list of doubled-up incumbents comes from an analysis prepared by Iowa Senate Democratic staff. Ordinarily, only the 25 odd-numbered Senate districts would be on the ballot in 2022, but any even-numbered district with no incumbent or more than one incumbent seeking re-election will be on the ballot next year as well.

UPDATE: Green announced on Facebook November 14 that he "will be establishing residency in the new Senate District 24." No incumbent now lives there.

UPDATE: Williams told the Carroll Times Herald on November 4 that he will bow out, saying Schultz "has some seniority, and he’s good guy.” Williams was first elected to the legislature in 2020, while Schultz served six years in the House before winning his first term in the Senate in 2014.

Most even-numbered Senate districts won't be on the 2022 ballot, but Schultz cannot hold over in the new Senate district 6, since he was re-elected to a four-year term in 2018.

UPDATE: Johnson announced that he will run in the new Iowa House district 67, which covers all of Delaware County, about half of Buchanan County, and a small area in Dubuque County.

UPDATE: Rozenboom posted on Facebook December 8 that he will retire at the end of 2022, even though he was elected to a four-year term in 2020. That decision will allow Dickey to hold over until 2024 in this district.

UPDATE: Goodwin announced on January 28 that he will retire from the Iowa Senate at the end of 2022. Consequently, Reichman will be able to hold over until 2024.

UPDATE: Celsi told Bleeding Heartland she will run for re-election. "I am not done with my public service, on the contrary I am just getting started. I am looking forward to serving the Iowans in my new district boundaries." Trone Garriott wrote in a November 1 newsletter,

LATER UPDATE: Celsi announced on November 2 that she will seek re-election in Senate district 16. Trone Garriott is considering several options, including moving to the part of her current district that will be part of the new Senate district 14 in Dallas County.

Senate district 40: Todd Taylor, Liz Mathis (as mentioned above, she is running for Congress in 2022)

UPDATE: Taylor announced on November 16 that he will seek re-election in 2022. Normally, even-numbered Senate districts would not be on the ballot, but since Taylor was elected to a four-year term in 2018 he needs to run again next year.

UPDATE: Smith announced in December that he is running for state treasurer in 2022, and Lykam announced in January that he will retire at the end of this term.

If Kinney retires, Driscoll (first elected in 2020) could hold over until 2024. But since Kinney was re-elected to a four-year term in 2018, he must be on the ballot next year.

UPDATE: Both Kinney and Driscoll have indicated they will seek re-election, setting up what should be a targeted race for 2022. The winner will need to run again in 2024 for a full four-year term.

The current 60-40 Republican majority appears to be quite durable, for reasons discussed here. Democrats need to become more competitive in smaller towns and mid-sized cities to get anywhere close to 51 seats during the coming decade. 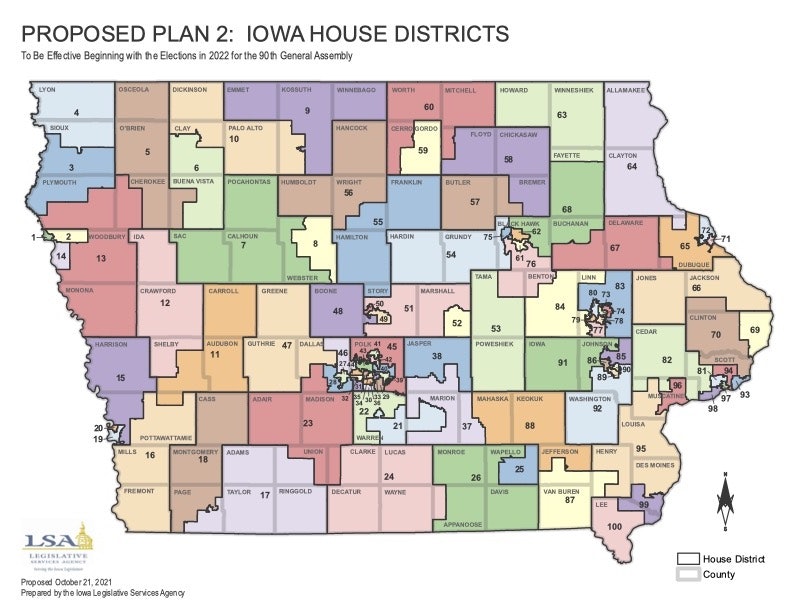 This list of doubled-up incumbents comes from the same analysis prepared by Iowa Senate Democratic staff. All 100 state House seats are on the ballot every two years. Keep in mind that some of these incumbents may retire or move to an open seat rather than face off against a colleague in a primary.

UPDATE: Wheeler announced on December 14 that he will move to House district 4 to avoid a primary contest with Jeneary.

UPDATE: Thorup announced on October 30 that he's running in the open Senate district 19.

UPDATE: Bousselot announced on November 30 that he will run in the new Senate district 21. Iowa Senate Majority Leader Jack Whitver is moving out of that district to run in safer GOP territory (Senate district 23).

UPDATE: Both Hein and Bradley will seek re-election in this district. Bleeding Heartland previewed the race here.

UPDATE: Salmon announced on Facebook on October 29 that she plans to run for Iowa Senate district 29 next year. That district currently has no incumbent.

UPDATE: Paustian announced on November 14 that he will retire, Tom Barton reported for the Quad-City Times. Kaufmann confirmed the following week that he will seek re-election in House district 82.

UPDATE: I assumed Shipley would move over to run in the new House district 26, which contains part of his current territory and has no incumbent. But former State Senator Mark Chelgren announced on November 4 that he will run in that House district. I analyzed Shipley's options and pondered a possible primary contest with Mitchell here.

LATER UPDATE: Both Shipley and Mitchell will seek re-election in House district 87.

UPDATE: Brink announced on December 14 that she won't seek re-election in 2022, in order to "devote more of my time to my three kids." She said Hite has her full support.

House district 34: Ako Abdul-Samad, Marti Anderson (she has already indicated she plans to retire in 2022)

UPDATE: Donahue will run for the open Senate district 37. Gjerde has not decided whether to run for the House or Senate in 2022.

LATER UPDATE: Gjerde announced in early January that he will seek re-election in strict 74.

UPDATE: Winckler and Kurth confirmed that they are in conversation and won't face off in a primary. It's not clear which one will run for the House seat and which will run in the open Senate district 49.

UPDATE: Cisneros announced in November that he will seek re-election in the new House district 96.

Kerr announced in January that he will retire at the end of 2022. Taylor Collins, a former staffer for Governor Kim Reynolds and Lieutenant Governor Adam Gregg, will seek the GOP nomination in the new House district 95.

UPDATE: Although he wasn't paired up with another incumbent, Republican State Representative Charlie McClintock announced that he will run in the open Senate district 42 in 2022, rather that for re-election in the new House district 83. That leaves House district 83 (covering much of Linn County outside the Cedar Rapids metro) without an incumbent.

Has your state representative or senator commented publicly on where they plan to run in 2022? Please contact Laura Belin with details.