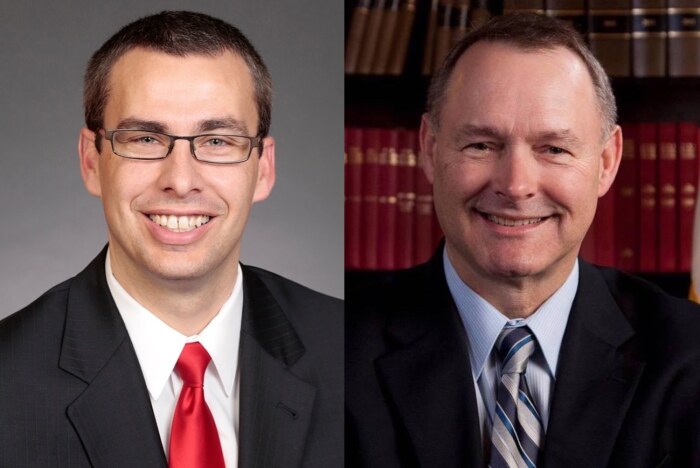 With a promise to help Iowa families "achieve their dreams, overcome challenges, and secure their future,” three-term Republican State Senator Roby Smith launched his campaign for state treasurer on December 9.

"ROBY SMITH IS ALWAYS THERE"

Smith has represented parts of Davenport and Bettendorf in the Iowa Senate since 2011. His news release and campaign video highlighted his role in passing large tax cuts, and the fact that he has never missed a Senate floor vote.

Fitzgerald is the longest-serving state treasurer in U.S. history, having been elected for the first time in 1982. Smith wants to turn that long tenure to his advantage, saying in his news release, “Iowa needs a Treasurer who understands the challenges of the 21st Century and is willing to protect Iowans from a Biden administration that is determined to invade our financial privacy.” In his video, the male announcer promises Smith will "stop Biden and Pelosi from snooping on your finances."

Many Republican politicians, including some in Iowa, have misled the public about a Biden administration proposal to expand banks' reporting requirements to the Internal Revenue Service. But even if Smith's characterization were accurate—it isn't—it's not clear how a state treasurer could counteract that kind of federal policy. Smith did not respond to Bleeding Heartland's inquiry about the claim. I'll update this post as needed.

Fitzgerald's campaign confirmed the treasurer will run for re-election next year and provided the following statement via email.

In times like today, there is no question that experience counts. Throughout my years as state treasurer, I have developed expertise in many areas. I have been a leader in 529 college savings (College Savings Iowa), unclaimed property (Great Iowa Treasure Hunt) and state financings. I launched the IAble program, which helps Iowans with disabilities and their families save for the future and not risk losing benefits. I understand how important it is for the state to do things right when it comes to finances. Our mission statement in the Treasurer’s Office is to “Keep the Money Safe” and that is what we do.

I know that my work is not done and I am running for re-election next year. While I am proud of the accomplishments of the past, I’m focused on my agenda in the next term. We are making the IAble program easier for families and individuals to save. I continue to support legislation that would provide retirement savings opportunities to people who do not have access through their current employers. Through my leadership, I will continue to promote fair government and safe financial strategies.

More information about the IAble program is available here.

Smith claimed in his news release that he "led the effort to make it easier for families to invest and save in Iowa’s 529 college program by extending the time period families could contribute to their children’s account," despite what he called a "lack of vision" from Fitzgerald. Asked for a comment, the treasurer provided the following response.

I introduced legislation in 1998 to create College Savings Iowa and worked hard to get bi-partisan support. It passed both the House and the Senate unanimously and was signed by Governor Branstad. I have worked tirelessly for over 23 years to ensure Iowa has one of the best programs in the country. Iowans from both sides of the aisle love this program and I will not make it a political issue.

Fitzgerald has been re-elected nine times, usually by comfortable margins. He survived Republican wave elections in 1994, 2010, and 2014. Most recently, he defeated GOP challenger Jeremy Davis by 54.8 percent to 42.7 percent in 2018. Davis raised and spent very little on that campaign.

Smith is not well known outside the Quad Cities area. Whether he can raise enough money to compete statewide remains to be seen. GOP-aligned outside groups have not gotten involved in past Iowa treasurer races, but that could change. A corporate-backed organization spearheaded by the Iowa Farm Bureau Federation spent heavily to elect Secretary of Agriculture Mike Naig in 2018.

SMITH WILL LEAVE IOWA SENATE AFTER 2022

Iowa law prohibits candidates from seeking more than one office at a time, and Smith's current Senate term runs through the end of next year. So filing as a candidate for state treasurer guarantees that Smith will be unable to continue serving in the legislature after 2022.

That's good news for anyone who cares about voting rights. As Senate State Government Committee chair, Smith has been the main architect of several bills enacted since 2017, which made it harder for Iowans to vote or to have their ballots counted. Hundreds of eligible Iowa voters were unable to receive absentee ballots for the November city and school board elections, because the latest GOP election law set an earlier deadline for submitting absentee requests.

The redistricting plan adopted this fall paired Smith with Democratic incumbent Jim Lykam in the new Iowa Senate district 41. Lykam hasn't confirmed his 2022 plans, and I haven't heard of other possible Republican candidates for this district, which includes part of the city of Davenport, some other areas in Scott County, all of Cedar County, and a few precincts in Muscatine County. 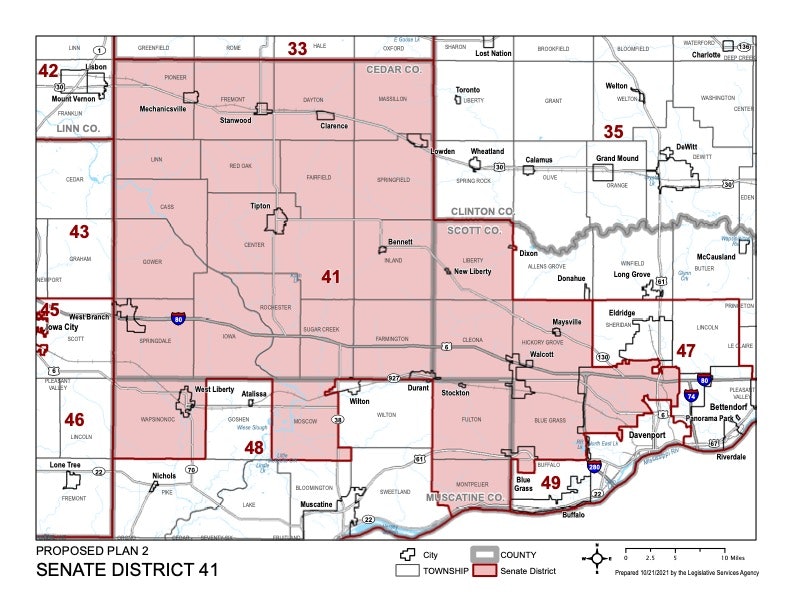 “Our economy, especially banking, is undergoing changes,” explained Smith. “Iowa needs a Treasurer who understands the challenges of the 21st Century and is willing to protect Iowans from a Biden administration that is determined to invade our financial privacy.”

In the Iowa Senate, Roby Smith led the effort to make it easier for families to invest and save in Iowa’s 529 college program by extending the time period families could contribute to their children’s account, while still receiving the tax benefit.

“Despite a lack of vision from our Treasurer, I led the charge in the Legislature to improve the 529 program for Iowa families,” Smith said. “Our plan made it easier for Iowa’s families to plan for their children’s future.”

Roby Smith has also been a key member of the conservative Iowa Senate majority that has delivered sweeping tax reform.

“When I was elected to the Iowa Senate, I promised my constituents I would always show up for them,” Smith continued. “That’s why I have never missed a vote from the floor of the Iowa Senate in eleven years, while helping pass the largest income tax cut for working Iowans in our state’s history.”

After graduating from Concordia University with a degree in Business Administration, Roby Smith worked for nearly a decade as a local banker in the Davenport area before becoming a small business owner and running for the Iowa legislature. Roby is currently an unpaid member of the local U.S. Bank Board and volunteers to teach financial literacy to students through the Junior Achievement program.

“My passion has always been about helping Iowa families achieve their dreams, overcome challenges, and secure their future,” concluded Smith. “That’s exactly where my focus will be as Iowa’s next Treasurer.”

Roby Smith and his wife, Kari, live in Davenport, IA with their four children. The family is active at Trinity Lutheran Church and Roby volunteers with area youth sports and also serves on the Scott Community College Foundation Board.

To learn more about Roby Smith’s campaign, you can visit robysmith.com