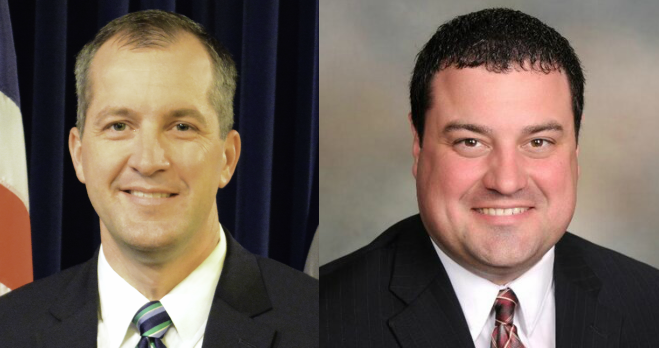 Despite support from his predecessor Bill Northey, Iowa Secretary of Agriculture Mike Naig needed four ballots to secure his party's nomination at the June 16 Republican Party of Iowa state convention. Governor Kim Reynolds appointed Northey's longtime deputy to serve out his term in March. Naig finished far ahead of the other four Republicans running for secretary of agriculture on June 5 but fell 0.3 percent short of the 35 percent threshold needed to win the primary outright.

All of the secretary of agriculture candidates emphasized their experience when seeking support from state convention delegates. O.Kay Henderson reported on the last public candidate forum, where Naig said he was best positioned to "maintain conservative leadership" in the Iowa Department of Agriculture and Land Stewardship.

State Senator Dan Zumbach, who finished second in the primary with 21.3 percent, talked about his work as chair of the Senate Agriculture Committee.

Third-place finisher Craig Lang (18.6 percent) highlighted his "past performance of fighting and winner the fights that matter" as leader of the Iowa Farm Bureau for ten years and a member of the Iowa Board of Regents. (Democratic Governor Chet Culver appointed Lang to that board; Governor Terry Branstad nominated him for a second term in 2013, but the Democratic-controlled Iowa Senate did not confirm him.)

Ray Gaesser, former president of the Iowa Soybean Association as well as the American Soybean Association, said he had worked with members of Congress and was familiar with export markets because of that background. The fourth-place candidate in the primary (16.2 percent) joined President Donald Trump's Agricultural Advisory Committee earlier this year.

Chad Ingels, a former member of the state Environmental Protection Commission and former watershed specialist for Iowa State Extension, finished fifth in the primary with 8.9 percent.

I expected Naig to win the nomination easily and thought his toughest competition would come from Zumbach, who was backed by dozens of Iowa Republican lawmakers and former presidential candidate Marco Rubio. However, Gaesser was the last one standing against the incumbent, in part because other contenders endorsed him after being eliminated from the race. Shane Vander Hart summarized the balloting in his liveblog of the GOP convention. (Note: the convention organizers misspelled Ingels' name on the screen showing delegate voting results.)

Although the results were far from a resounding vote of confidence in Naig, I expect Republicans to unite around his candidacy this fall, when he faces Democrat Tim Gannon.

After settling the secretary of agriculture nomination, the GOP convention turned to other state offices. No one was nominated for attorney general--shocking when you consider that Republican and conservative groups spent heavily supporting Brenna Findley in 2010. Although the Iowa GOP didn't wage a full-court press against Attorney General Tom Miller four years ago, state convention delegates nominated Adam Gregg, a former staffer to Governor Terry Branstad.

Jeremy Davis was the only candidate proposed for state treasurer. The former Ames City Council member and district office employee for U.S. Representative Steve King now works for the National Pork Producers Council. He was the GOP challenger to State Senator Herman Quirmbach in 2014. Davis told state convention delegates the governor had asked him to run for treasurer. Former Iowa GOP State Central Committee member John Thompson had been campaigning for that office for much of 2017 but did not file nomination papers this March. Last year, a judge granted a request from Thompson's former fiancee for a temporary restraining order (later dismissed).

Davis will be an extreme long-shot against Michael Fitzgerald, the country's longest-serving state treasurer. Having been re-elected comfortably in three GOP landslide years (1994, 2010, and 2014), Fitzgerald should not have any trouble in a midterm election where Democrats are more highly engaged.