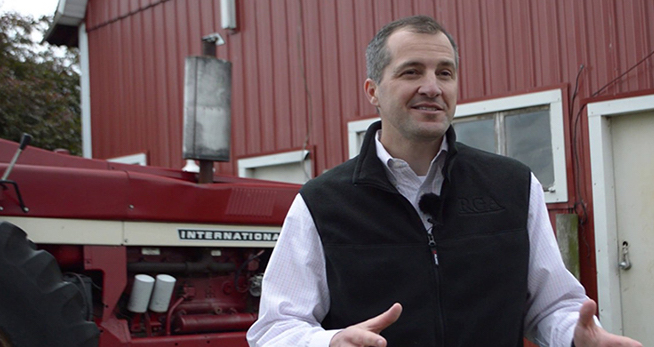 Iowa will soon have its first new secretary of agriculture since 2007. The U.S. Senate confirmed Bill Northey on February 27 as undersecretary for farm production and conservation at the U.S. Department of Agriculture. He should have been confirmed months ago; senators on the Agriculture Committee unanimously endorsed his nomination in October. But Senator Ted Cruz of Texas held the nomination over a Renewable Fuel Standard dispute that has nothing to do with Northey's portfolio.

Once Northey resigns as Iowa secretary of agriculture, Governor Kim Reynolds will appoint his longtime deputy Mike Naig to fill that post for the rest of this year, the governor's office announced on March 1. I enclose Naig's official bio below. One of five Republicans who have said they will run for Northey's job, Naig formally launched his campaign for that office on March 2. At this writing, only Craig Lang has qualified for the primary ballot. Other declared GOP candidates are Ray Gaesser, Chad Ingels, and Dan Zumbach. UPDATE: Northey posted on Twitter March 6, "I heartily endorse Mike Naig as our next Iowa Ag Secy. Mike has been a great partner as my Deputy Secy of ag for 4+ yrs. Mike is ready to lead. Let’s elect Mike in June & Nov!"

State Representative Pat Grassley was long seen as likely to run for secretary of agriculture when Northey retired, but he announced in January that he will seek a seventh term in the Iowa House. Another Republican viewed as a potential candidate for this office, Annette Sweeney, now serves as the USDA's state director for rural development.

Tim Gannon is the only Democrat running for secretary of agriculture.

The filing period for major-party candidates began on February 26 and runs through March 16. The Iowa Secretary of State's office is updating the candidate list daily. Lang and three others seeking statewide office have qualified for the ballot so far: Democratic gubernatorial candidate Ross Wilburn, Attorney General Tom Miller, and Rob Sand, Democratic candidate for state auditor. Fred Hubbell, another of the seven Democrats running for governor, submitted his nominating petitions on March 2.

I haven't heard of any Republican planning to run for attorney general this year. Miller was re-elected easily in 2010 and 2014, both GOP landslide years. His last challenger, Adam Gregg, is now acting lieutenant governor. His previous opponent, Brenna Findley (now Brenna Bird) announced on March 2 that she will run for Guthrie County attorney this year. She has been serving as Fremont County attorney. Last year I heard talk of former Iowa Secretary of State Matt Schultz running for attorney general in 2018, but he may sit tight as Madison County attorney until Miller retires.

The Republican Attorney General's Association commissioned a poll testing negative messages against Miller last summer, but either the findings weren't promising or they failed to recruit a candidate for some other reason. As of December 31, Miller's campaign had $208,166.15 cash on hand.

Mike Naig grew up on a farm near Cylinder, Iowa in the Northwest corner of the state. He is a graduate of Buena Vista University in Storm Lake with degrees in biology and political science. Naig is married to his wife Jamie and together they have three boys.

Naig has spent his entire career working in agriculture, having served in public policy roles for state and national agribusiness trade associations as well as in private industry.

As Deputy Secretary of Agriculture, Naig assists in management responsibilities for the Department, focused on the areas of Policy, Budget and Personnel. He also supports the Department’s efforts to be accessible for Iowans by traveling regularly to represent Secretary Northey at meetings and events across the state.

UPDATE: The Democratic Activist Women's Network is honoring its 2018 award recipients in Des Moines on March 4. DAWN's List was created in 1993 to support gender equity in politics and "the election of Democratic pro-choice women to public office." Kirsten Anderson was the guest speaker at this year's reception. The award-winners: