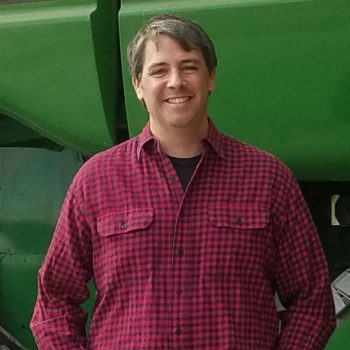 Democrats have confirmed candidates for all statewide offices, with Tim Gannon's announcement on February 1 that he will run for secretary of agriculture. The Mingo native moved back to Iowa in 2017 after eight years with the U.S. Department of Agriculture in Washington. He works on his family's century farm in Jasper County and as a crop insurance agent.

Gannon attended plenty of political events while young, watching Iowa Caucuses up close with a politically-engaged family. He later attended the University of Iowa, where he was a senior during Tom Vilsack’s first run for governor. Gannon was considering leaving the state for other jobs after graduation, but Vilsack urged him to reconsider. [...]

After that conversation, Gannon got more involved in volunteering on Vilsack’s campaign. He ran state legislative races after college, heading up the House Democrats’ campaign committee in the 2002 and 2004 cycle. Rural outreach was his job on Barack Obama’s 2008 campaign in Iowa, where he found success in bringing rural voters back to the party.

“I think I’ve been an ambassador for our state and especially its farmers and folks who live in the rural parts for as long as I’ve been alive,” Gannon says. “…We’ve got to not only continue to lead the world and lead the country in growing corn and beans and raising pigs and eggs, but we’ve also got to figure out new ways to add value to those products.”

While Gannon will likely be unopposed in the Democratic primary, three Republicans are already running for secretary of agriculture: Craig Lang, Ray Gaesser, and Chad Ingels. Deputy Secretary of Agriculture Mike Naig is also thinking about the race, Donnelle Eller reported for the Des Moines Register on February 1. UPDATE: Iowa Senate Agriculture Committee Chair Dan Zumbach told a radio interviewer on February 2 that he plans to run as well.

The last Democrat to be elected Iowa secretary of agriculture was Patty Judge, who won in 1998 and 2002. Current Secretary Bill Northey is nearing the end of his third term. He's up for a senior USDA position, but Senator Ted Cruz of Texas is holding up his Senate confirmation.

DES MOINES - Farmer, crop insurance agent and former USDA official Tim Gannon announced today he is running for Iowa Secretary of Agriculture. Tim, who grew up in Mingo and farms 900 acres on his family’s Century Farm in Jasper County, is pledging to strengthen support for Iowa’s core agricultural products while also expanding investment in new products designed to grow jobs and opportunity in the state.

“My values come from my family farm and the small Iowa town in which I was raised,” said Tim Gannon. “I know firsthand the critical role agriculture plays in the success of Iowa. It is the foundation on which sustainable growth and job creation come to all corners of our state.

“As Secretary of Agriculture, I will strengthen support for the pillars of Iowa agriculture, and I will fight to expand the market so that producers of all types and sizes can thrive,” said Gannon. “In places like my hometown of Mingo, we need to do much more to give young people hope for the future, and that means expanding Iowa agriculture and supporting value-added products that can be tested, grown, and manufactured right here in Iowa. It also means taking care that our valuable farmland remains healthy and productive and that our waterways provide clean water that is safe for all Iowans -- rural and urban.”

As Secretary of Agriculture, Tim Gannon will work every day to find new markets for Iowa’s corn and beans, keep foreign markets open for the state’s products and improve soil health, so farmers remain the most productive in the world. Protecting Iowa’s soil and water and creating economic opportunities outside of urban centers will help keep Iowa’s best and brightest living on the farms and small towns that have given so much to the state.

From 2009 to 2017, Tim worked for former Iowa governor, and U.S. Secretary of Agriculture Tom Vilsack in various positions focused on improving risk management options for farmers and ranchers, creating jobs in rural communities, and improving the delivery of USDA services and programs to all Americans. When credit was especially tight for rural businesses in 2009, Tim helped USDA Rural Development implement an expanded business loan program improving its delivery in all 50 states. As Associate Administrator of the Risk Management Agency (RMA), he helped oversee implementation of the 2014 Farm Bill expanding insurance options for new and beginning farmers, producers of various sizes and production methods, and insurance products for new crops. Tim worked to address difficult issues to ensure RMA worked more efficiently and respond to farmers use of new technology. While serving at RMA, the improper payment rate in crop insurance fell to less than half of the government average, and he led efforts to better integrate precision technology into crop and acreage reporting.

A graduate of the University of Iowa, Tim lives in Des Moines with his wife, Liz, and daughter, Lucy, who they welcomed in December 2017.

From the "Meet Tim" page on Gannon's campaign website:

That experience drives Tim everyday to improve our rural economy, and increase opportunities for Iowans across the state. As Secretary of Agriculture Tim will work to find new uses for the corn and beans we grow and keeping foreign markets open for our products; improve soil health so that our farmers remain the most productive in the world; and protect our water resources so that everyone in Iowa has clean, safe, affordable drinking water.