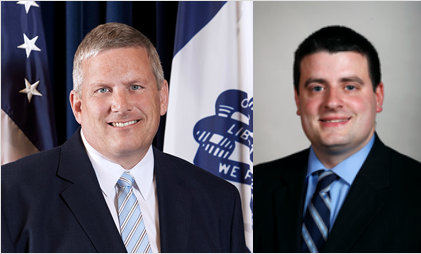 Bill Northey's heading to the USDA. Who will take his place?

President Donald Trump has officially nominated Iowa Secretary of Agriculture Bill Northey to a senior position at the U.S. Department of Agriculture. In another sign of this administration's lack of basic competence, the USDA's news release says Northey will be Under Secretary for Farm Production and Conservation, while the statement from the White House says he will be Under Secretary for Farm and Foreign Agricultural Services. (See excerpts enclosed below, along with Northey's official biography.)

Either way, U.S. Senate confirmation should be smooth sailing, clearing a path for Governor Kim Reynolds to appoint a new secretary of agriculture later this year or in early 2018. The appointee would presumably be a prohibitive favorite for the Republican nomination next spring.

This thread is for any speculation about successors to Northey. A few months ago, I thought State Representative Pat Grassley was a lock for the job. He was seen as a likely candidate for secretary of agriculture in 2014 or 2018, had Northey run for higher office. His grandfather, Senator Chuck Grassley, is co-chairing the Reynolds campaign for governor.

And yet: ever since Pat Grassley tweeted last week that he was "not convinced" a state tax incentives package worth $400,000 per long-term job created by Apple was "good value for Iowa taxpayers," I've been wondering whether he and the governor had a falling out. Perhaps word reached him that Reynolds is leaning toward someone else for secretary of agriculture. The governor has been talking up the Apple deal as a major accomplishment. Her chief of staff, Jake Ketzner, is not known for showing tolerance toward Republicans who criticize or question his boss.

The political map drawn up after the 2010 census put Sweeney and Pat Grassley in the same legislative district, and she lost a tough, expensive 2012 primary widely viewed as a proxy war between Bruce Rastetter and Senator Grassley. The two Iowa Republican powerhouses were on opposite sides again during last year's GOP primary in the fourth Congressional district.

Sweeney is a childhood friend of Rastetter, who has been a major donor to Reynolds and before that, had tremendous influence over her mentor, Governor Terry Branstad (see also here). Reynolds' chief of staff Ketzner became a senior adviser to Chris Christie's presidential campaign around the same time Rastetter endorsed the New Jersey governor.

Iowa Democrats do not have a declared 2018 candidate for secretary of agriculture yet. Northey narrowly defeated Denise O'Brien in his first statewide election, then won his second and third terms by comfortable majorities.

Excerpts from a White House press release on September 1:

William Northey of Iowa to be Under Secretary for Farm and Foreign Agricultural Services.
Mr. Northey is a 4th generation farmer from Spirit Lake, Iowa and is currently serving his 3rd term as Iowa Secretary of Agriculture. Under Mr. Northey's leadership, the Iowa Department of Agriculture and Land Stewardship has promoted science and new technologies to better care for our air, soil, and water and focused on telling the story of agriculture. Mr. Northey is a past-president of the National Association of State Departments of Agriculture and serves as co-chair of the Gulf of Mexico Hypoxia Task Force. Mr. Northey served as President of the Iowa Corn Growers Association from 1995 to 1996. He served on the Iowa U.S. Department of Agriculture Farm Service Agency State Committee and as a Dickinson County Soil and Water Conservation District Commissioner. Mr. Northey graduated from Iowa State University with a degree in Agricultural Business and received a B.A. from Southwest Minnesota State University. Mr. Northey and his wife Cindy have 3 grown daughters and 5 grandchildren.

Excerpts from a USDA press release:

“I look forward to the confirmations of Greg Ibach, Bill Northey, and Stephen Vaden, and urge the Senate to take up their nominations as quickly as possible,” Perdue said. “This is especially important given the challenges USDA will face in helping Texans and Louisianans recover from the devastation of Hurricane Harvey.”

Regarding the individual selections, Perdue issued the following statements: [...]

“Bill Northey will continue his honorable record of public service in leading FPAC. Having served the people of Iowa for the last ten years as their Secretary of Agriculture, and as a fourth generation corn and soybean farmer, Bill has a unique understanding of issues facing farmers across the nation. He will be an invaluable member of the team.” [...]

Official bio of Northey from the Iowa Department of Agriculture and Land Stewardship:

Iowa Secretary of Agriculture Bill Northey is a fourth-generation Iowa farmer that grows corn and soybeans on his farm near Spirit Lake. He started farming with his grandfather, Sid Northey, after graduating from Iowa State University in 1981.

The people of Iowa elected Northey to be Secretary of Agriculture in November of 2006 and he was sworn in on January 2, 2007. Northey ran on a platform of expanding opportunities in renewable energy, promoting conservation and stewardship, and telling the story of Iowa agriculture.

As Secretary, Northey has committed to traveling to each of Iowa’s 99 counties to hear from farmers and rural residents with a stake in the future of agriculture. These meetings allow him to listen to their needs and better lead the Iowa Department of Agriculture and Land Stewardship as it seeks to serve the people of the state.

On his farm, Northey uses reduced tillage, GPS and grid soil sampling. Besides raising corn and soybeans, the Northey farm has grown alfalfa and raised hogs and cattle throughout the years.

Throughout his career in agriculture, Northey has been a leader in a variety of farm groups. From 1995-96, he served as President of the National Corn Growers Association and was Chairman of the group in 1996-97. He has led a number of Committees for the Corn Growers, as well.

Following in the footsteps of his grandfather E. Howard Hill, who served as president from 1947 – 1963, Northey has also been active in Iowa Farm Bureau. He was named a “Friend of Agriculture” by the Iowa Farm Bureau Political Action Committee in 2006 and has served in a number of Farm Bureau offices at the county and state level, including serving as President, Vice President and committee chairman of the Dickinson County Farm Bureau.

Northey has also served on the Iowa USDA Farm Service Agency State Committee, was a Dickinson County Soil and Water Conservation District Commissioner and was a board member of Ag Ventures Alliance.

As a result of his involvement in these organizations, Northey has traveled around the world to view agriculture. He has traveled to Taiwan, Japan (five times), Indonesia and Singapore (to the WTO Secretariat) representing Iowa farmers. He has also traveled to another 17 countries spending time studying agriculture production and policy.

He graduated from Iowa State University with a degree in Agricultural Business in 1981 and was a member of FarmHouse Fraternity, serving as its President his senior year.