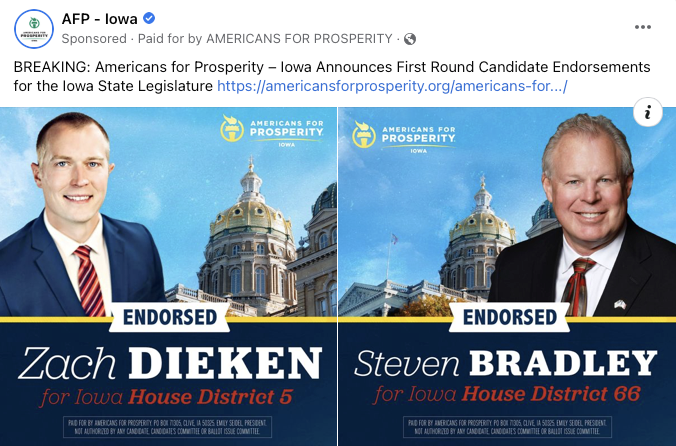 Americans for Prosperity — Iowa announced its first two endorsements for Republican legislative primaries on January 13. In both Iowa House districts, the candidates backed by the influential conservative lobby group will face more experienced GOP lawmakers in the June 7 primary.

The new House district 5 covers all of Osceola and O'Brien counties, most of Cherokee County, and a small area in Buena Vista County. 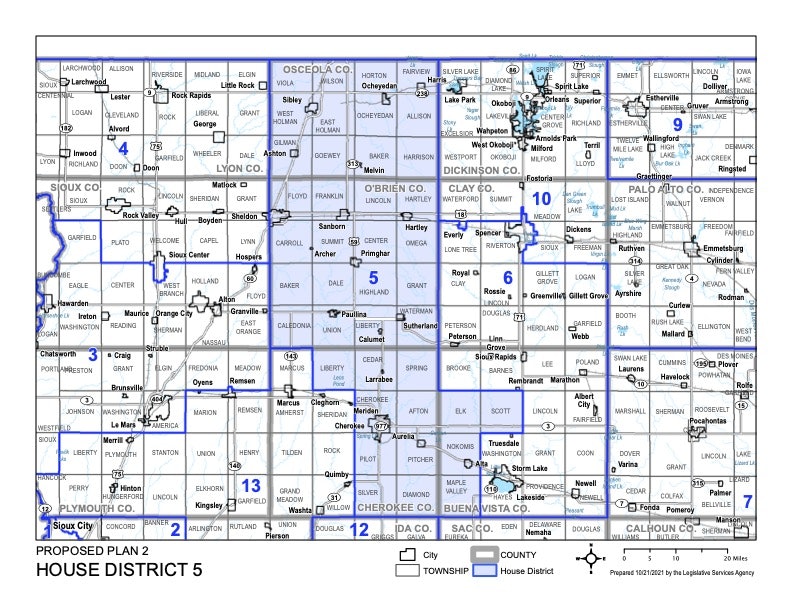 Bush is a former two-term Cherokee County supervisor who won a three-way GOP primary in 2020 for the Iowa House seat he now represents. The redistricting plan lawmakers approved in October put Bush's farm just outside the boundaries of House district 5, where most of his current constituents live. The incumbent announced in December that he's moving to the city of Cherokee, where he and his wife "have shopped, banked and attended church" for decades.

Dieken was the first Republican to announce in November that he's running in House district 5. Elijah Helton reported for N'westIowa.com that Dieken "is a trooper in the Iowa State Patrol and works part-time as a substitute teacher in the Sheldon and MMCRU school districts."

“I would say I’m a genuine conservative, not a moderate. I think that we live in an area that’s genuinely conservative and not moderate. We bleed red up here, not mixes of red and blue. We’re pretty red up here,” Dieken said. [...]

In announcing his campaign he listed his top positions as anti-abortion, pro-gun and anti-“radical indoctrination” — a GOP talking point expressing fear over discussions of racism, especially in education. [...]

“What would set me apart — at least someone running in this area — as someone who grew up in the area, I understand this area to be very genuinely conservative. I would match the cultural dynamic,” Dieken said.

It's not hard to guess why AFP is looking for someone other than Bush. During the 2021 legislative session, he told constituents at a forum in Sheldon,

“My wife and I worked on open enrollment back in the ’80s as a parent,” Bush said. “I’ve always been a strong supporter of open enrollment and choice of parents to cite which school district best fits the needs of their kids.”

That said, he discounted the chances of Iowa enacting Senate File 159. The bill, which passed the upper chamber in late January, would provide state funding for private-education enrollment in struggling public school districts.

“I don’t believe the vouchers is going anywhere,” Bush said. “There was significant resistance even within the Republican Caucus to that program. I personally have a problem with it. One of the founding principles of this nation was the separation of church and state, and I have a problem getting past taking public tax dollars . . . and taking that to a private, religious school.”

The Republican lawmaker said he is “sure the primary is going to be the election,” but that hard-line members of the Grand Old Party often get in the way of pragmatic legislation.

“I share the core Republican values. I’m pro-life, a supporter of Second Amendment rights, almost the standard Republican stump speech — I’m in that camp. But I’m not in the camp that’ll go out there and promise people I’m cutting your taxes. Services cost money,” Bush said.

He drew from his previous offices.

The idea of putting public services (schools, roads, and mental health) ahead of tax cuts would be anathema to any Koch-funded group.

A third candidate, Tom Kuiper, also plans to seek the GOP nomination in House district 5, Helton reported on December 23. In all likelihood, the real competition in the primary will be between Bush and Dieken.

The new House district 66 covers all of Jones County and most of Jackson County, but not the city of Maquoketa. 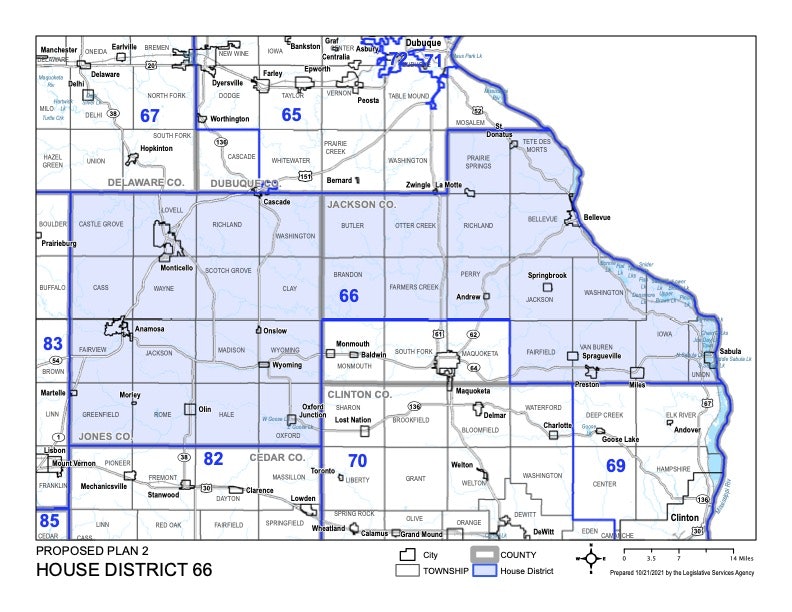 Recent voting history here favors Republicans. Trump received 62.1 percent of the vote and Ernst 58.7 percent in 2020, and Reynolds gained 56.7 percent in 2018, according to Josh Hughes' map in Dave's Redistricting App.

Bradley was elected to the legislature for the first time in 2020, defeating Republican-moderate-turned-Democratic incumbent Andy McKean in a district that includes Jackson County and part of Jones.

Hein has served in the state House since 2011 and currently represents the other part of Jones County. He has chaired the powerful Ways and Means Committee since 2019.

Most of the Republican incumbents who landed in the same legislative district on Iowa's new map have resolved the situation by someone moving, retiring, or running for a different office. But Bradley and Hein both confirmed in November they planned to run in House district 66.

I was surprised to see AFP endorse a first-termer over the chair of the tax-writing committee. Hein hasn't voted against any of the group's priorities, to my knowledge. But Klein registers on many bills every year; Hein may have been less than helpful behind the scenes on one or more of them. AFP's news release praised Bradley's votes on tax cuts and education bills.

Abortion is the only issue on which Hein has publicly parted ways with the majority of the Republican caucus. He voted against the 2018 bill that would have banned almost all abortions after six weeks of pregnancy. (That law never took effect because it was struck down as unconstitutional.) Hein also opposed the state constitutional amendment GOP lawmakers approved last year, which would say the Iowa Constitution does not grant any right to abortion.

But AFP didn't take a position on either of those bills (see lobbyist declarations here and here). So Hein's less extreme stance on reproductive rights wouldn't explain the group's backing for Bradley in this year's primary.

UPDATE: A reader reminded me that Hein championed an ethanol mandate bill last year, which would have required retailers to sell gasoline with a 15 percent ethanol blend. Hein is a farmer, and many groups associated with the agricultural sector supported the proposal, as did Governor Kim Reynolds. AFP lobbied against it, as did many fuel retailers. Although the Koch brothers have invested in biofuels, Koch Industries has lobbied against policies promoting ethanol and biodiesel for many years.

All other things being equal, I would consider a more entrenched incumbent who leads an influential committee to be the favorite in a GOP primary. But when a well-financed group like AFP weighs in, all bets are off. In a low-turnout primary environment, Bradley will benefit from AFP's voter contacts and paid advertising on his behalf.

In addition, the majority of Iowans living in the new House district 66 are now represented by Bradley, not Hein. UPDATE: It may be a close call whether a majority live in Bradley's district. The two largest towns in Jones County are in Hein's current district.

I'll keep an eye on other competitive state legislative primary races. One of the most interesting Republican match-ups could be brewing in the new House district 87 in southeast Iowa. As Bleeding Heartland discussed in November, two-term State Representatives Joe Mitchell and Jeff Shipley both live in this district, and there are no nearby options without a prominent Republican candidate. Mitchell announced on January 14 that he will seek re-election in House district 87. Shipley hasn't announced his plans. CORRECTION: Shipley confirmed in November he is running in that district.

DES MOINES, Iowa – Americans for Prosperity – Iowa (AFP-IA) today announced its endorsement of Rep. Steven Bradley (IA-66) and Zach Dieken (IA-5) to the Iowa House of Representatives. These candidates earned the endorsement of AFP-IA for their dedication to principled policy solutions.

AFP-IA has a track record of successful grassroots engagement in both political and policy fights and will leverage a wide range of tactics, including direct grassroots voter outreach, digital advertisements, and direct mail to urge voters to support these candidates.

“AFP-IA is excited to kick off the first of our endorsements in legislative races for the 2022 cycle. Common among Rep. Bradley and Dieken is a commitment to a wide array of bold policy solutions including expanded educational opportunities for students, bold tax reform and fiscal restraint, and addressing the regulatory barriers across industries in Iowa will help take our great state to the next level. Our activists are ready to throw their full support behind these exceptional candidates to help get them elected to the Iowa House of Representatives.”

State Representative Steven Bradley championed smart fiscal policies that lowered taxes for Iowa families and businesses. Steven Bradley is committed to growing Iowa’s workforce and understands the importance of providing tax relief for Iowa families and small businesses. Last year, Bradley voted in favor of Senate File 619, which delivered income tax cuts for all Iowans and phased out the state inheritance tax over four years. In total, the bill would provide roughly $1 billion in tax relief for Iowans over eight years.

State Representative Steven Bradley understands the importance of and has fought tirelessly to expand opportunities for Iowa students. Steven Bradley is committed to helping Iowans face challenges in the education system. During his time as state representative, Bradley supported legislation that removed barriers to school choice by expanding open enrollment requests. Additionally, Bradley voted in favor of House File 813, which allowed new charter schools to directly apply to the state’s Department of Education rather than through a local school board.

As a medical professional, Dr. Steven Bradley has worked hard to serve Iowa patients in a thoughtful and respectful way while bringing a unique health care perspective to the state Legislature. Through his service as Iowa Dental Association President, Chairman of the Iowa Dental Board, member of the Finley Hospital Foundation Board, as well as his leadership position on the House’s Human Resource committee, Bradley understands the importance of a health care market that is focused on quality and affordable care that delivers patient centered results. He saw the negative impacts government regulation can have on patient care and during his time as state representative has sponsored legislation that would expand scope of practice.

As a lifelong Northwest Iowan, Candidate Zach Dieken is committed to enriching the lives of all District 5 residents. Zach Dieken understands the negative impacts stemming from top-down, one-size-fits-all policies in Washington, and as a member of the Iowa Legislature he will fight to ensure individuals and families keep more of their hard-earned paychecks. He is committed to regulatory reform and will stop “overreach from the federal government whose Washington values are diametrically opposed to the values of the voters.”

As a substitute teacher, Candidate Zach Dieken understands the importance of empowering families and expanding opportunities for Northwest Iowa students. Zach Dieken is committed to improving North Iowa communities and has stated he will be a positive contributor towards the future “of our great state.” He is a supporter of parental choice in education and will work tirelessly to ensure families have an educational system that maximizes options and flexibility for students.