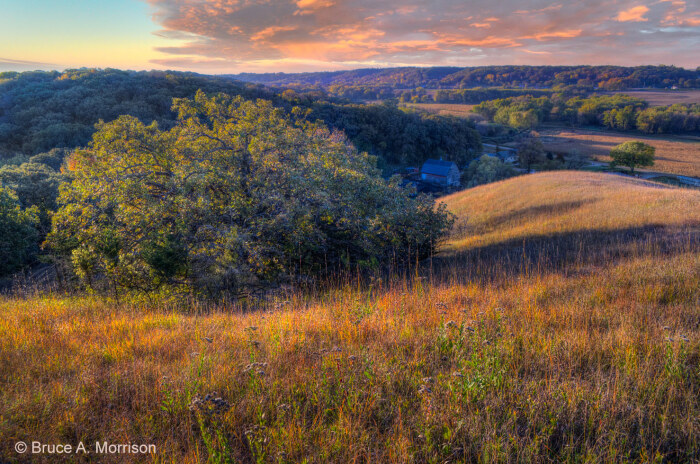 An affair with the landscape

Bruce Morrison shares some of the northwest Iowa landscapes he has photographed or painted. Top image: "View From Brian's Overlook- Sunrise No.1" - (NW Clay County - photograph - © Bruce A. Morrison)

When my wife and I moved to our little acreage in northwest Iowa nearly 20 years ago, I had already experienced a lifetime of love and reverence for the Landscape. I can still remember my summers as a youngster on the Des Moines River, which I lived above in Fort Dodge, and almost daily hikes down the railroad tracks to a friend's farm west of town - where the Lizard Creek spread below their "night pasture", as they called it…and met downstream with the north fork where the Chicago Northwestern track crossed the waterway's junction.

The hillsides above the creek were favored respites to lay on in the summer sun and dry off after a swimming hole visit or after wading a good fishing hole; and many times just to watch the valley's pair of Red-tail Hawks magically hanging in the air high overhead. The views always left me wanting to hold them fast in my memory; it was an emotion I never shook. 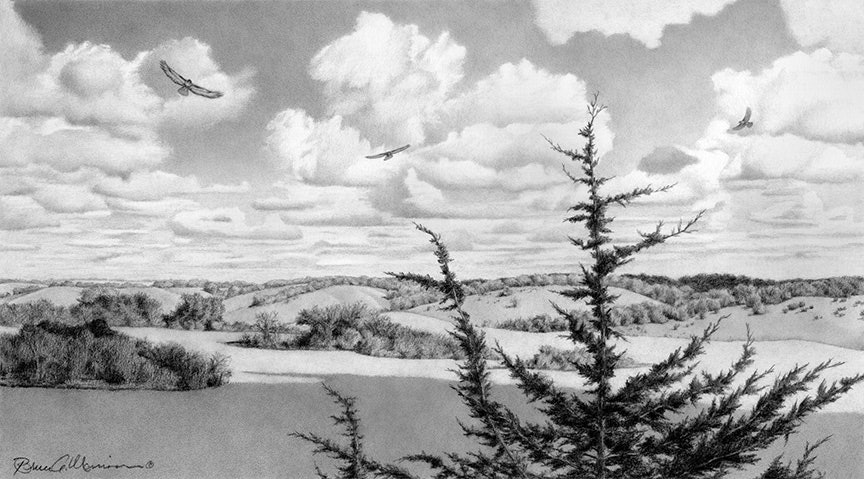 Early on I would go to extremes to admire a distant view - a favored approach was to climb a large Cottonwood until I rose above the canopy, with a good available limb to sit and scan a nearby or distant valley. My Dad gave me a small metal spotting scope that always traveled sticking out my jeans' back pocket…the views given were a tonic.

Eventually my spotting scope was replaced by a year's savings from my Des Moines Register paper route - and an order made to the Olden's Camera Store in Chicago for my first SLR 35mm camera and two lenses; that year was 1962. 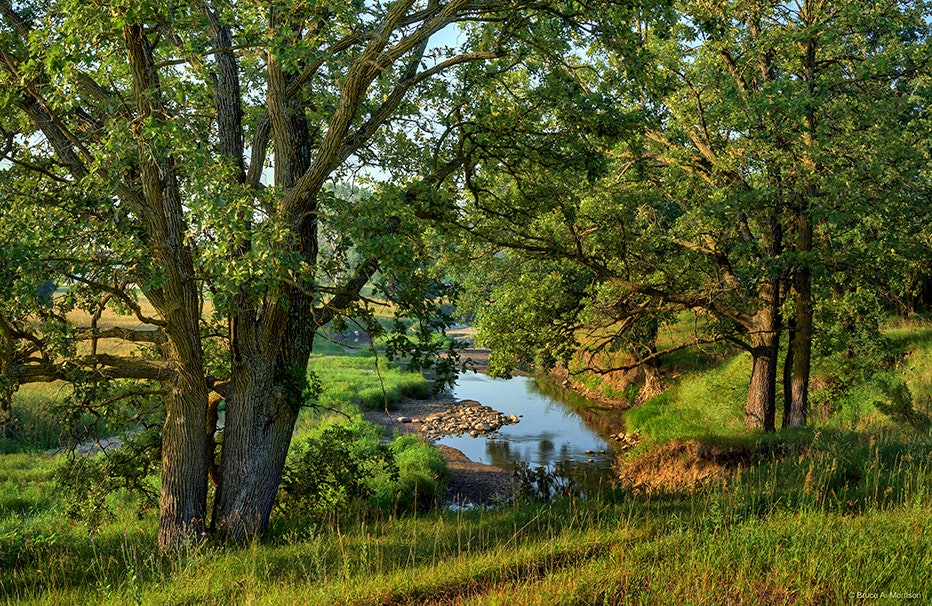 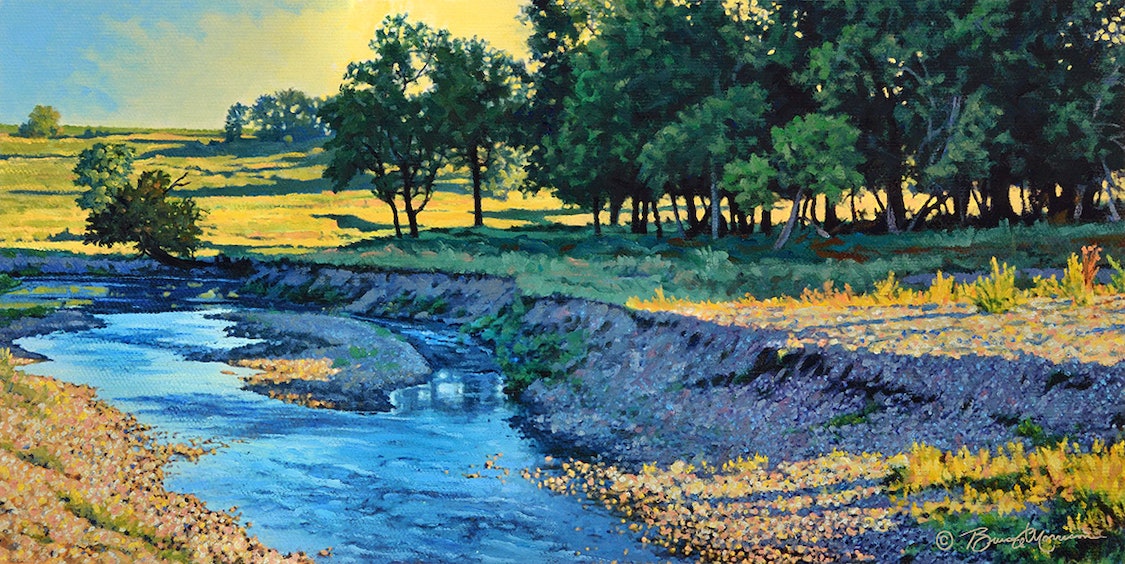 Once I had this extension to my imagination (my new camera), I soon recognized not just the grand view I first found so mesmerizing, but something more intimate. Each turn in the wooded trails I hiked or the creek I fished offered up something I'd value. I don't remember exactly when I realized how much I was "wired" visually, but I'm reminded of it continually to this day in my seventies. 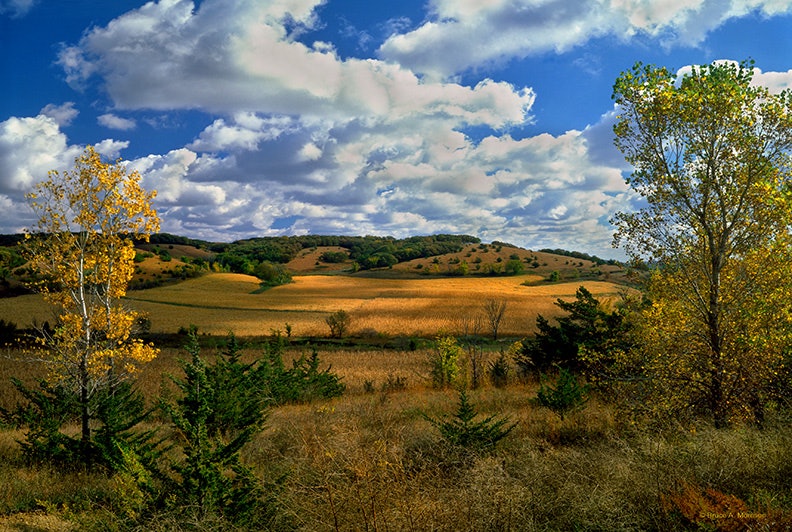 For many years working at an area community college, I had driven down to our future "neck of the woods" on weekend jaunts. This area was obvious to me as a hidden gem - not a tourist trap or teeming with people, it was hillsides of timber, pasture, and native prairie remnants. It was farmland tucked in bottom ground where the slopes stopped, sometimes bordered by Bur Oaks, Ash, Cottonwoods and Eastern Red Cedar. There were winding streams - Waterman Creek and many smaller named streams like Jordan, Barry, and others. And the Little Sioux River - the watershed's matron.

After 25 years of just being a visitor to the Little Sioux Valley, I found myself facing leaving familiarity and taking a chance. 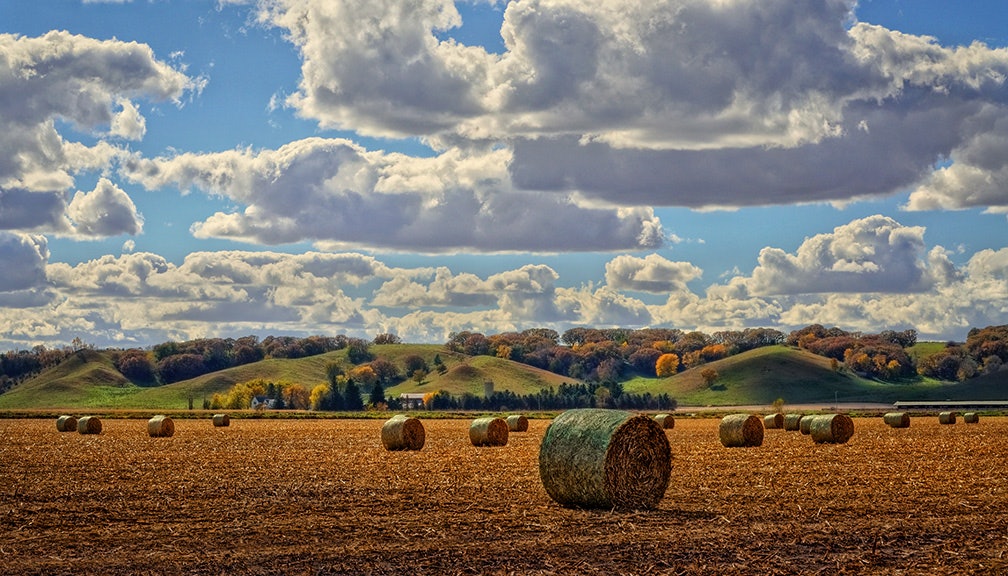 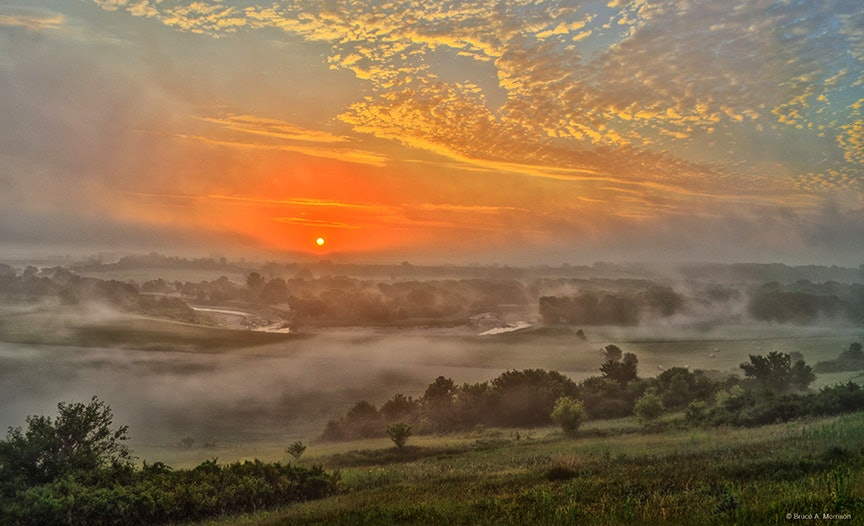 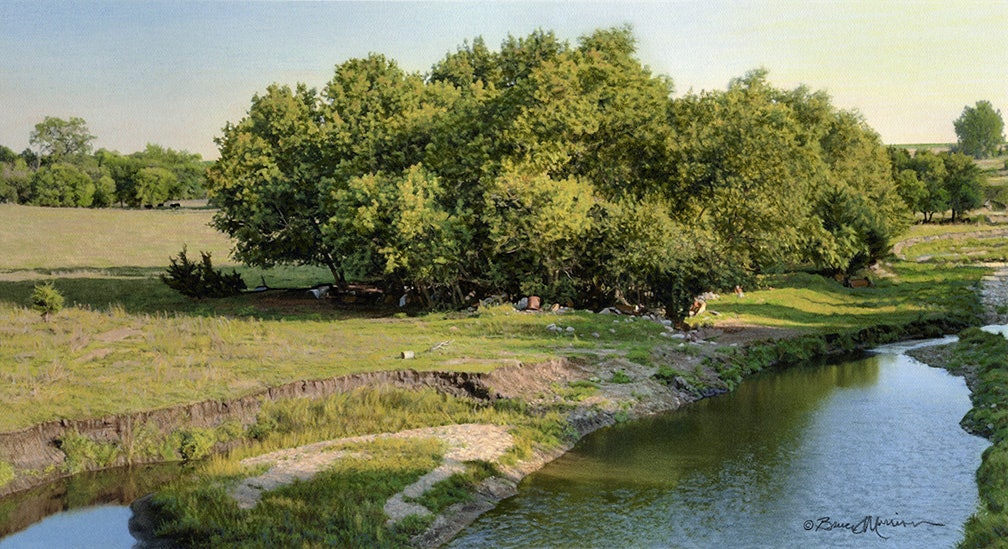 I had found myself falling for our native prairie. There are so many beautiful examples along the Little Sioux River and Waterman Creek valleys. One day an acreage came up for sale on a small valley hillside overlooking the Waterman. The acreage had an old 4 square farm house that hadn't been lived in for some years. There was an old barn and some out-buildings. But the clincher was the pastures - it had two, the larger one had tell tale signs of remnant tallgrass prairie. We were all in for the long haul! 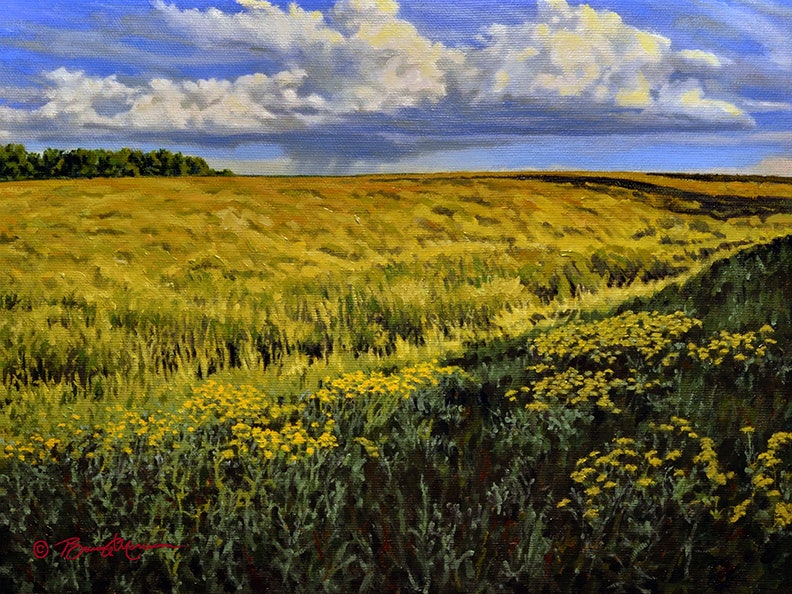 From Brooding House to Studio/Gallery

One out-building on our newly acquired acreage was a nearly 90 year old Brooding House (chicken coop) that had also been used for sheep as recently as the early 1990s. After four or five years of cleanup we dove into the task of remodeling the entire building for a studio and gallery.

Since 2008 the remodeled building has been my photography base and painting studio and gallery. 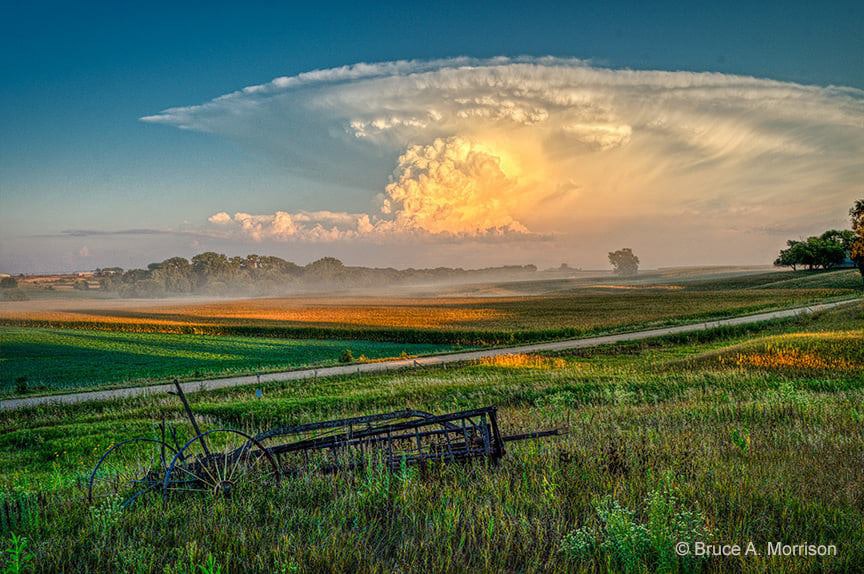 "Thunderhead Over Pocahontas, As We Wait For Rain" - (At Prairie Hill Farm in SE O'Brien County - photograph - © Bruce A. Morrison) 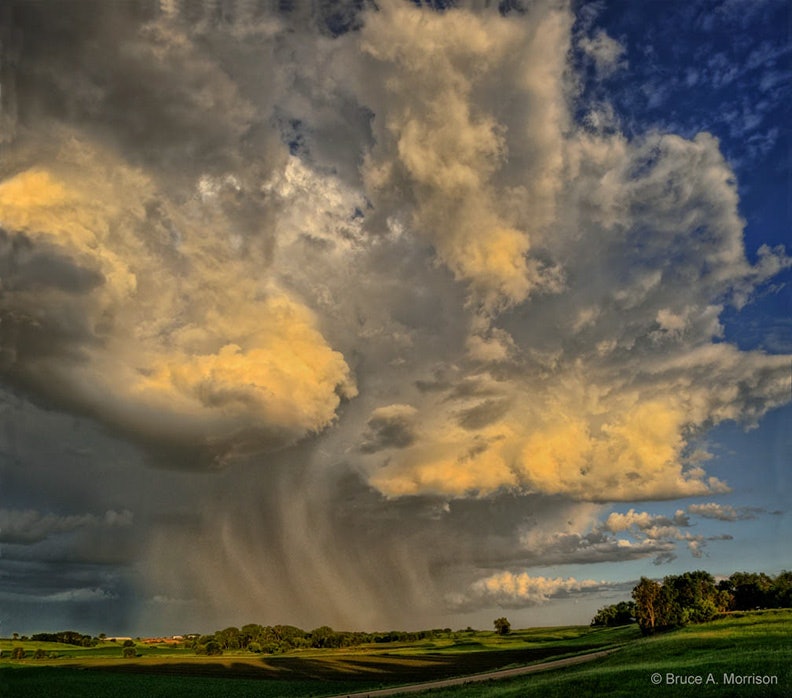 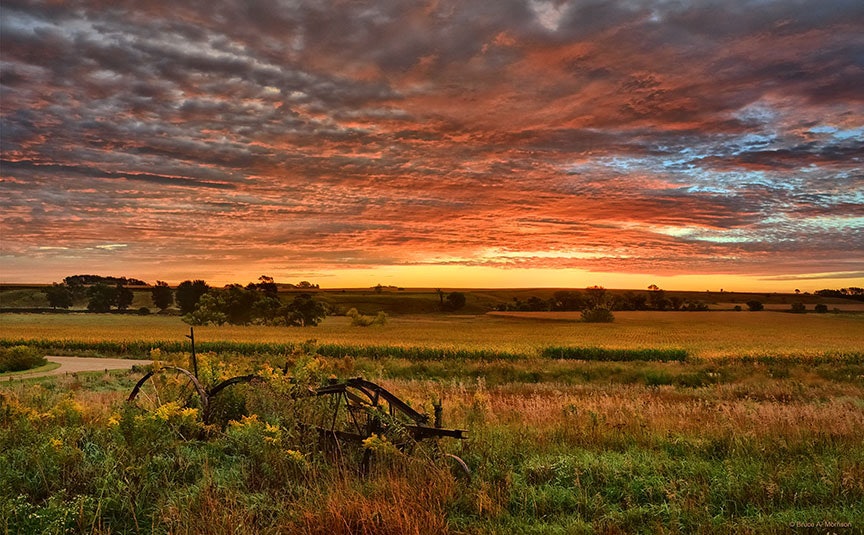 I have painted and drawn, been a printmaker and a photographer, for nearly 60 of my 70+ years now. This new home we call Prairie Hill Farm, has now been my inspiration and connection to the tallgrass prairie and the flora and fauna that exists here. I had long been a birder - back when "Birding" was a small niche. Birding in my youth actually led me to the landscape and brought much of the land's beauty in focus for me.

Here now, I explored our "neighborhood" to a much more intimate level. I began listening to my neighbors, being given permission by many to walk their land. I recorded what I felt in my paintings and drawings, or what I saw in my photographs. It was like a new lease on my life. I was so grateful I took that chance and left familiarity, for the remnants of what natural heritage that still existed here, so often hidden from view. 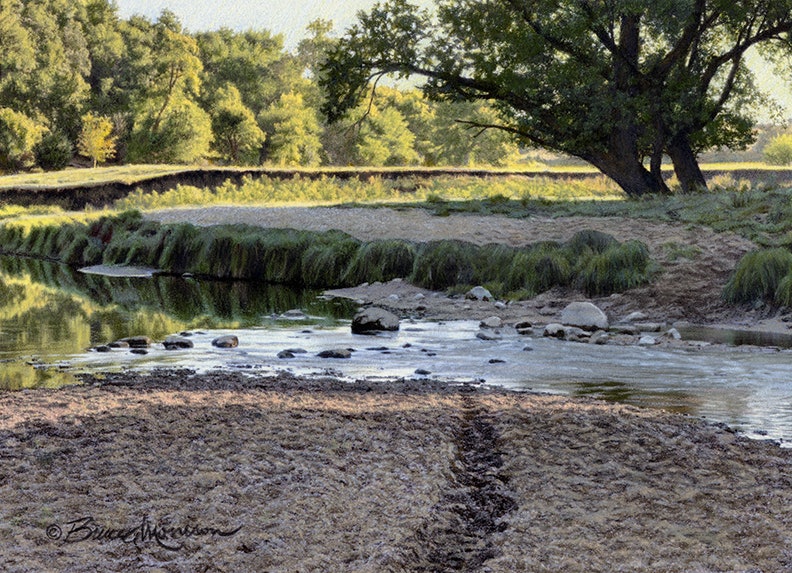 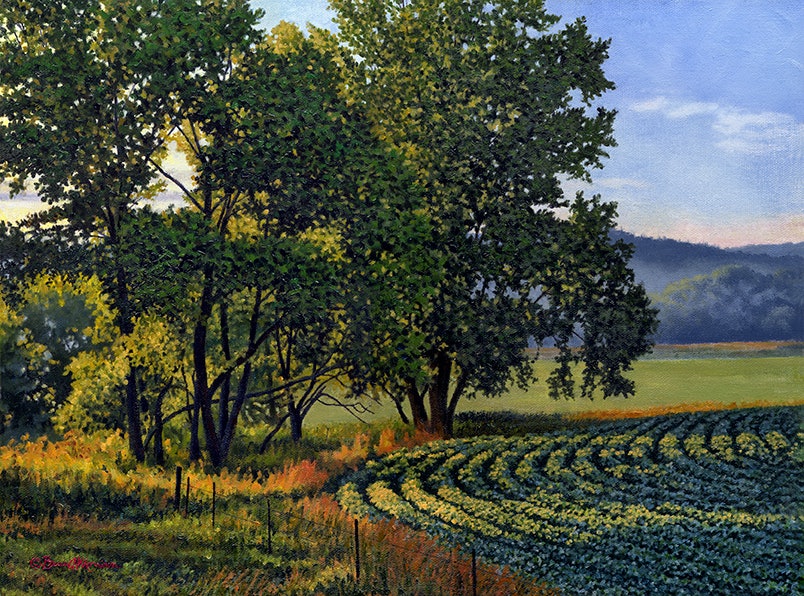 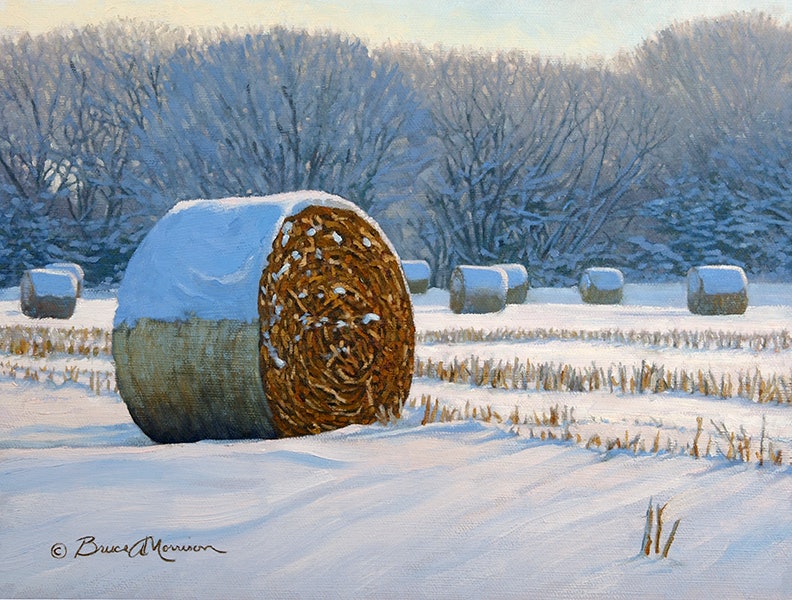 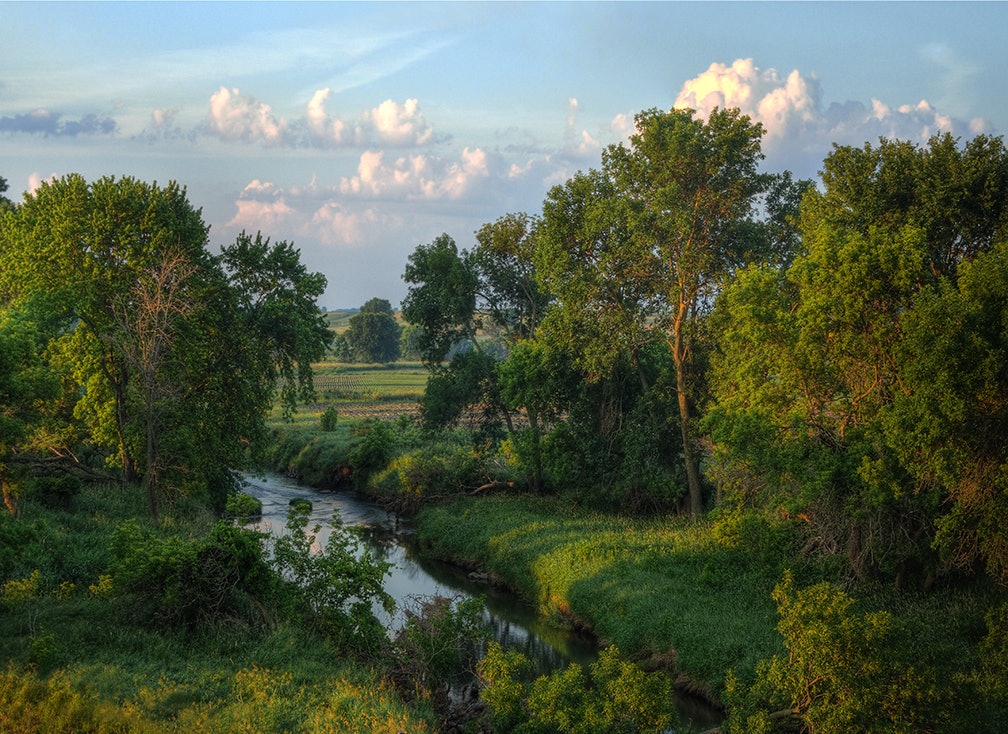 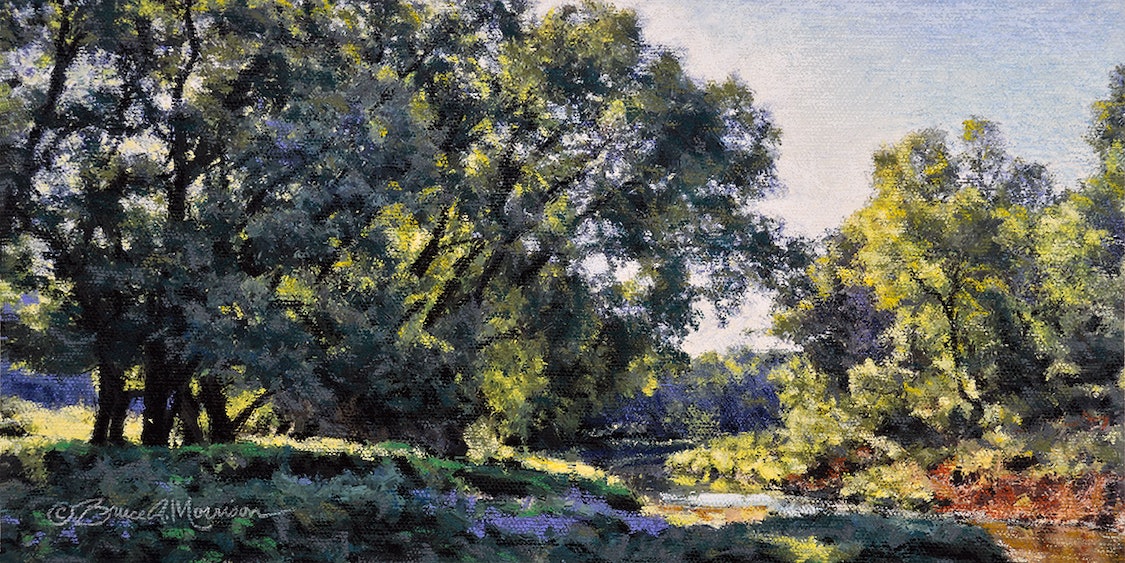 More often, the words spoken in my studio's gallery were "I know that place," "I used to swim there as a kid," "I've been horse riding there many times," "That was my Dad's favorite hunting place," and so on. I was finding and portraying bits and pieces of other's lives and loves in the landscape. Aren't we all rooted in a sense of time and place throughout our life's experiences? 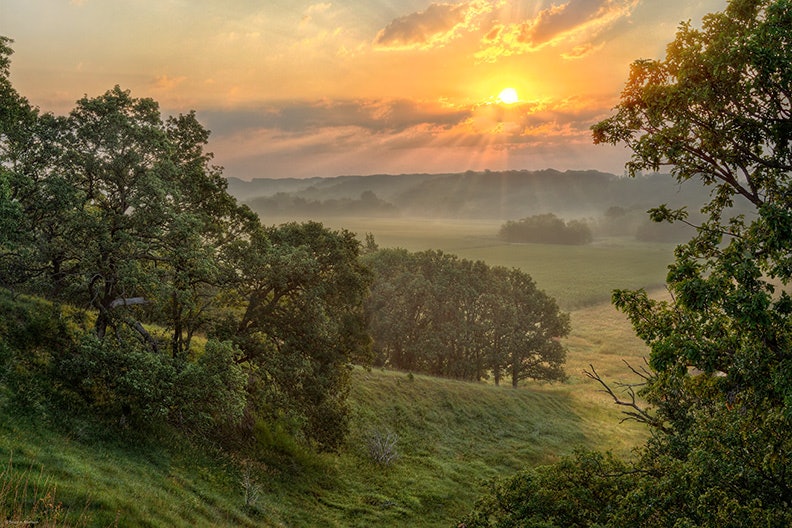 I will never be able to paint, draw or photograph "all" of what I have explored in this small corner of our county, nor in neighboring counties.; there are so many intimate landscapes to walk, and vistas to celebrate and portray. But "Keep me around Lord" I pray, that I might try. 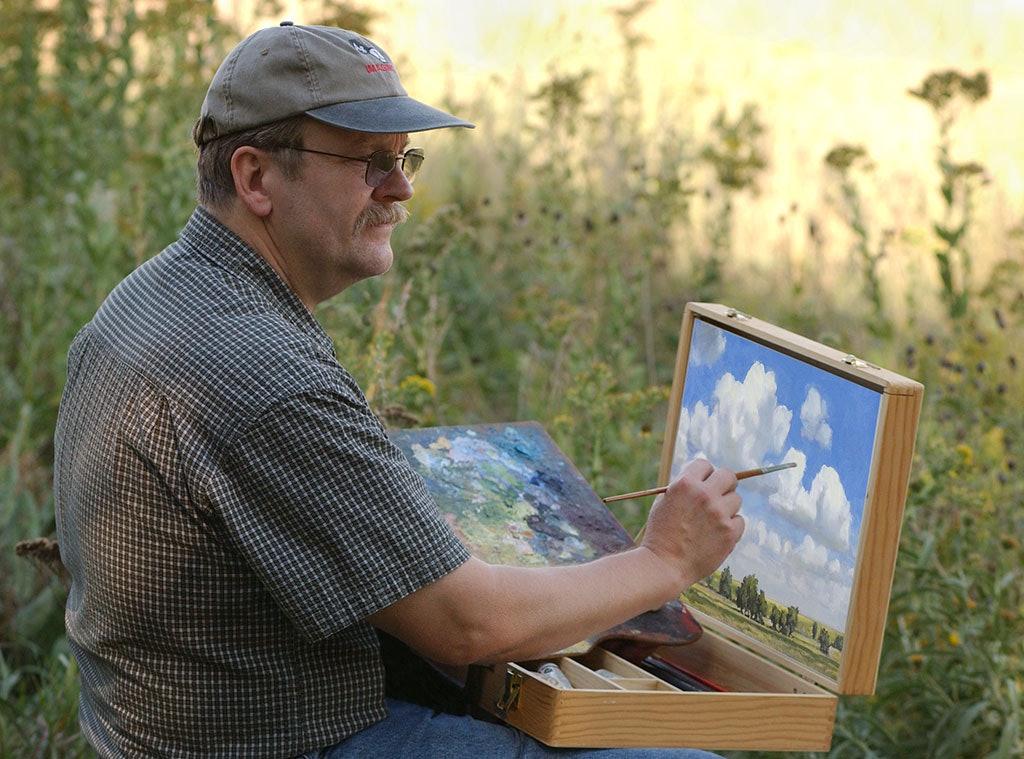 Epilogue - Bruce Morrison was born in Boone, Iowa and raised in Fort Dodge. After the Army he studied Art at the University of Iowa's School of Art, where he majored in Photography and minored in two other disciplines - Painting and Serigraphy.  Bruce first worked in a professional Photo Lab in Kansas City, Missouri, where he did work for professional studios, military branches, presidential libraries, and commercial entities.  He saw an opportunity to return to his his home state of Iowa and took a position in Sheldon, where he worked for 25 years at a community college heading the Media Department and as an adjunct photography teacher.

Bruce's photography and writing credits can be seen in the Iowan Magazine, Midwest Highways and Byways, and other publications through the past 35 years. Morrison has exhibited his paintings and drawings around the U.S. and Canada as well as overseas, and has work included in college, museums, corporate and private collections around the world. Bruce and his wife Georgeann live and work on their small prairie remnant in southeast O'Brien County, Iowa.