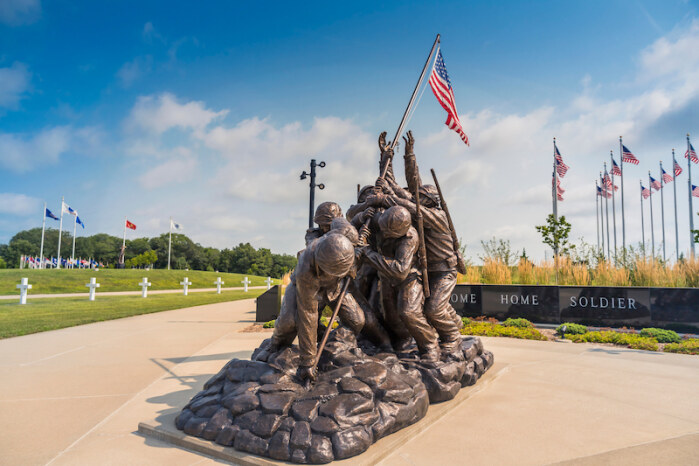 What the federal government has done for veterans in 2021

It's customary for American politicians to release statements on this day thanking veterans for their service to the country. But what has the government done concretely to return the favor to veterans? This year, more than usual.

The last major COVID-19 relief package, which Congressional Democrats approved and President Joe Biden signed, included $17 billion in funding for veterans' programs. A March 16 blog post by the U.S. Department of Veterans Affairs broke down the spending as follows:

Other portions of the American Rescue Plan weren't earmarked for veterans, but could benefit them or their families, such as pandemic-related unemployment benefits, stimulus checks, or child tax credits.

In addition, the Veterans Affairs Department noted, "Veterans are prioritized for the $28.6 billion Restaurant Revitalization Grants in the Small Business Administration’s Restaurant Revitalization Fund. During the initial 21-day period in which the Small Business Administration (SBA) awards grants under this program, SBA will prioritize awarding grants to eligible entities that are owned and controlled by Veterans."

The COVID-19 relief package also closed "what is known as the '90/10 loophole' to protect the integrity of the GI Bill and Veterans in receipt of their well-earned education benefits." Some background on that loophole:

Many for-profit colleges have been sued by federal and state law enforcement for illegally deceptive and aggressive recruiting of veterans, servicemembers, their families, and survivors, including “pain-based” recruiting, as the US Senate Committee on Health, Education, Labor and Pensions detailed in a groundbreaking report in 2012. Since then, numerous former recruiters and for-profit executives have detailed the emphasis on recruiting servicemembers and veterans, to access the “military gravy train.”  During COVID, many for-profit colleges increased their social media advertising — some by close to 15,000 percent. [...]

The 90/10 Rule in the Higher Education Act was intended as a market viability test: to ensure for-profit colleges are able to secure at least 10% of their revenue from sources other than federal education funds, but an inadvertent loophole was created when the definitions failed to include student aid from the US Departments of Defense (primarily, Tuition Assistance and Military spouse career advancement accounts (MyCAA)) and Veterans Affairs (primarily, the GI Bill).  Senate staff who wrote the loophole said it was accidental.

The veteran suicide rate is substantially higher than for U.S. adults who are not veterans. While veteran suicides dropped slightly since peaking in 2017, the latest statistics (from 2019) still show far more veterans are taking their own lives each year than was true during the 2000s. An estimated seventeen service members or veterans die by suicide every day. Even one is too many.

Congress has passed several bills designed to address military and veteran suicides. President Donald Trump signed one such measure in 2020. In June, President Joe Biden signed legislation to improve mental health care for veterans, which was named after Sgt. Brandon Ketchum, an Iowan who had served in the Marine Corps. All four of Iowa's U.S. House members co-sponsored that bill, which Bleeding Heartland covered in more detail here. The main focus is to provide better services to veterans in rural areas; most of Iowa would fall under that designation.

In early October, the Senate unanimously approved a bill co-sponsored by Iowa's Senator Joni Ernst, which is modeled on an American Legion program. It "would direct the Department of Veterans Affairs (VA) to designate one week per year as 'Buddy Check Week' to organize outreach events and educate veterans on how to conduct peer wellness checks." The House has not yet acted on the bill.

The Build Back Better Act includes a significant $5 billion investment to improve health care delivery for veterans by modernizing Veterans Affairs (VA) health care facilities, leasing medical facilities, and speeding up claims processing. More than 9 million veterans are enrolled in VA’s health care system, and as a result of their military service, many face significant health care needs. To help meet these needs, VA operates the largest integrated health care system in the nation, with more than 1,700 hospitals, clinics and other health care facilities, but far too many of these facilities are in desperate need of renovations. The median age of U.S. private sector hospitals is 11 years; however, the median age of VA facilities is 58 years, with 69 percent of VA hospitals over the age of 50. These investments will offset the growing costs of older facilities while helping to meet the health care needs of the veterans of yesterday’s wars, today’s wars, and the future.

IOWA OFFICE-HOLDERS WHO ARE VETERANS

Finally, I want to acknowledge the service of Iowa's current federal and state officials who are veterans or active members of the military. Please let me know if I have inadvertently omitted anyone.

Several 2022 candidates for Iowa state or federal offices are also veterans, including: