Maybe Chuck Grassley should do something stupid

Herb Strentz: Hatred and extremism are more visible in the current political climate. Yet those elements have been active in the U.S. for decades.

A few recent news items and internet links point to the same conclusion: the GOP (Grand Old Party) has become the COT (Cult Of Trump), which appears to be just fine with many Republican leaders.

Concern about Donald Trump as a business and political figure goes back decades. But the catalyst for this collage is twofold and recent.

A little more than a month ago, Iowa’s U.S. Senator Chuck Grassley told Fox News before a Trump rally in Des Moines that it would be "stupid" to turn down the former president's endorsement for his re-election, given his popularity among Iowa Republicans — even though Trump and his entourage are under state and federal investigations and may face a package of indictments and prison terms.

The Des Moines Sunday Register of November 14 offered readers a package of news and opinion coverage on Trump-related issues. The news coverage was faithful to the horse-race mentality that haunts political reporting, focusing on an Iowa Poll showing Trump leading President Joe Biden in a hypothetical 2024 race — presuming Trump will not be behind bars or otherwise sanctioned because of criminal investigations now underway.

The editorial, "Threats of violence threaten our democracy," focused on challenges we face in 2021, in particular the divisive political atmosphere.

The editors argued, “A large part of the blame for these circumstances belongs to Trump and his ‘stolen election’ lies and to Republican leaders too cowardly to stand up to him.”

The call for GOP leaders to stand up to Trump echoes a sentiment often (wrongly) attributed to Edmund Burke, an 18th-century Anglo-Irish philosopher and member of parliament: “The only thing necessary for the triumph of evil is for good men to do nothing.”

The defense perimeter around the Big Lie about the 2020 election is a tactic Trump and his cult use to dismiss reporting on his folly and frauds.

At a national convention of the Veterans of Foreign Wars in Kansas City in 2018, the president warned the crowd about “fake news”: “What you’re seeing and what you’re reading is not what’s happening.”

That recalled a line in George Orwell’s novel 1984: “The party told you to reject the evidence of your eyes and ears. It was their final, most essential command.”

Fears about an authoritarian regime coming to the United States are often dismissed as overreactions. But in recent years, the public presence and actions of hate groups have been alarming. The insurrection at the U.S. Capitol on January 6—encouraged by Trump —raises legitimate concern about the country's future.

The vast amount of money and the vitriol that drive such hatred are certainly more visible in the current political climate. Yet those elements have been active for decades.

Todd Blodgett's book Republican Crackhead is a painful and sobering account of how an Iowan from a prominent family served in Ronald Reagan's White House and later became involved with extremist groups and suffered from a ruinous drug addiction. 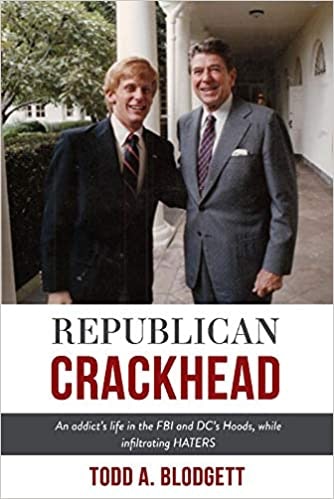 Well-respected people, whom Blodgett met while working for the Reagan administration, recruited him into hate groups during the 1990s. The Federal Bureau of Investigation then enlisted him as a paid informant about the white nationalists' money laundering and organizational activities. Todd writes that he became addicted to crack cocaine in 1999 but has been drug-free since 2006.

The author's father, Gary Blodgett, was a Mason City orthodontist, state legislator, and deputy Iowa House majority leader from 1993 to 2001. The Blodgett family worked in GOP campaigns from the days of President Richard Nixon to those of George W. Bush, who appointed Dr. Blodgett an administrative judge in the U.S. Department of Health and Human Services. The elder Blodgett died last May at age 83.

Todd Blodgett has shared his experiences in occasional columns as well as in his book.

For example, soon after the 2017 disorder in Charlottesville, Virginia, during which an anti-racist counter-protester was killed, the Huffington Post published Blodgett's open letter urging white supremacists to free themselves from the “putrid, so-called movement." He argued, “Significant differences exist between legitimate conservatism and bigoted, racist hatred.”

In October 2018, when anti-Semitic and pro-Nazi activities made news in Iowa, Blodgett provided some insights into such hate groups in a guest column for the Des Moines Register.

And in June 2020, he wrote about his own “white privilege," describing how he was treated differently from people of color arrested on drug charges with him.

I had heard of extremist activities from my brother, a retired FBI agent who also taught at the FBI Academy in Quantico. But Todd’s stories struck me because I was acquainted with him when he was an undergrad at Drake University.

Striking a less despairing note than the above, the thoughtful writer Kareem Abdul-Jabbar offered this perspective in a recent Substack column:

The polarity in America is not between the left and right, as we’re constantly being told. It’s between, on one side, those from both the left and right who are reasonable, rational people looking to form opinions based on facts—and on the other side, the irrational people worrying about lizard people, stolen elections, microchips in the vaccines, Jewish satellites starting forest fires, and their individual rights over their social duty. Fanning the flames of polarization to fill their own pockets are the soulless entrepreneurial ghouls shrieking about divisiveness.

Abdul-Jabbar mentions Fox News as one of the profiteers several times in that column.

In addition to the “entrepreneurial ghouls” “fanning the flames,” there are good people who do nothing.