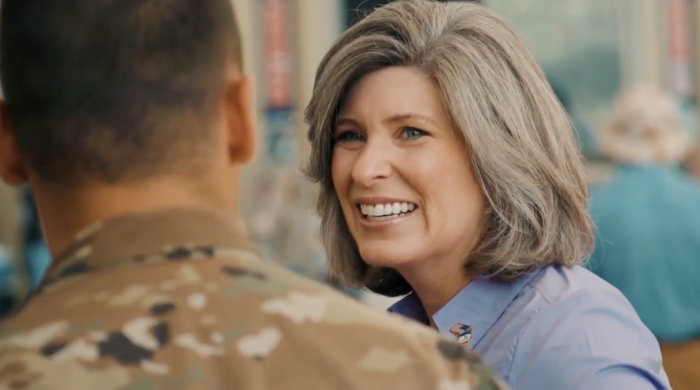 The public is one step closer to learning who funded a sophisticated messaging and organizational effort to re-elect Senator Joni Ernst in 2020. A federal court on November 19 denied a motion to dismiss a watchdog group's lawsuit against Iowa Values, which supported Ernst's re-election in 2020 but did not disclose its fundraising or spending.

The Campaign Legal Center, a nonprofit focused on "advancing democracy through law," sued Iowa Values in February, after the Federal Election Commission did not act on the center's complaint against the pro-Ernst group for more than a year.

Judge Royce Lamberth of the U.S. District Court for the District of Columbia comprehensively rejected legal arguments the pro-Ernst group raised in trying to dismiss the lawsuit and return the case to the FEC, which would likely do nothing.

As Brian Slodysko reported for the Associated Press in December 2019, Ernst consultants and campaign staffers formed Iowa Values as a tax-exempt 501(c)4 organization. Those are not required to disclose their donors and for that reason are commonly known as “dark money” groups.

While a 501(c)4 “may engage in political campaign activities if those activities are not the organization’s primary activity,” under Internal Revenue Service rules, it must register as a political committee and file regular disclosures with the Federal Election Commission if it raises and spends more than $1,000 in a calendar year and demonstrates that its “major purpose” is to influence a federal election.

Emails and a strategy memo first published by Slodysko indicate that this group was focused on getting Ernst re-elected, and "also show Ernst and her campaign worked in close concert with Iowa Values."

The Campaign Legal Center filed an administrative complaint with the FEC regarding Iowa Values in December 2019. When the commission failed to take action, the center filed suit in June 2020. The FEC did not defend against the lawsuit, and Judge Lamberth issued a default judgment order last October requiring the FEC to act on the administrative complaint within 90 days. Again the commission did nothing, so the judge ruled in February that the Campaign Legal Center could sue Iowa Values directly under a rarely-used "private right of action" provision of the Federal Election Campaigns Act.

Bleeding Heartland published the center's complaint filed in February. The crux of the case is that under federal campaign finance law, Iowa Values was required to register as a political committee. By not doing so and “concealing critical information” about its contributions and expenditures in support of Ernst, the group broke the law, harming both the Campaign Legal Center “and the electorate at large.”

Iowa Values denied that advertising praising Ernst's "leadership" was designed to promote her re-election. But the group's July 2019 strategy memo made clear that Iowa Values would "identify and communicate directly with segments of the electorate that will be determinant in winning or losing in 2020." The memo also laid out a "ground game apparatus that not only takes messages to doors of the 'firewall' universe but also begins to develop a relationship with these targeted voters." The group's advertising strongly resembled campaign commercials; you can view several videos here.

In seeking to get the case dismissed before any court could consider the merits, Iowa Values threw up a wide variety of legal arguments. The court rejected them all. Here's the full text of Judge Lamberth's November 19 opinion.

The defendant argued the District Court lacked jurisdiction over the matter and that the FEC's inaction on the complaint was not "contrary to law." But Judge Lamberth found that the FEC "has failed to act on a supported, credible complaint that alleges a violation of federal election law and, ultimately, a threat to the integrity of the electoral system." The FEC had a quorum for some time after the complaint was filed and therefore could have acted on it.

The pro-Ernst group also said Campaign Legal Center had no standing to bring the case. But the court found that the nonprofit has standing because it "suffered an informational injury" due to Iowa Values' failure to disclose its fundraising and spending.

Judge Lamberth found no support for any of the defendant's constitutional arguments against the federal law that allows citizen suits. The law is not unconstitutionally vague and does not violate the First Amendment or the U.S. Constitution's "Take Care" clause. Regarding the First Amendment claim, the judge wrote, "Defendant's private associational rights are important and defendant is right that these rights cannot be needlessly invaded. That is why a citizen suit can only be initiated after the FEC acts contrary to law and after it fails to subsequently conform to a court's order."

The most significant portion of the ruling begins on page 15. Iowa Values had argued the plaintiff failed to state a plausible claim that the group is a political committee that should have registered as such and regularly disclosed its fundraising and spending. The Campaign Legal Center presented evidence that Iowa Values spent tens of thousands of dollars in 2019 on an advertising "blitz," and emails showed the group solicited funds for that purpose.

Iowa Values had argued that the solicited contributions were for issue advocacy. But the emails and memo "included repeated references to Ernst's election and election strategy," such as how to appeal to suburban women and which voters who backed Ernst in 2014 might be "peeled off in 2020." Advertising produced by the group "represent blatant support for Ernst with little or no discussion of other issues." All in all, the plaintiff "has alleged more than enough to state a plausible claim that Iowa Values' major purpose was to elect Ernst in 2020."

Erin Chlopak, the Campaign Legal Center's senior director of campaign finance strategy, described the court ruling as a "resounding victory" in a November 19 email to Bleeding Heartland. "We couldn’t agree more with the Court’s recognition that FECA’s citizen suit provision is a 'safeguard to protect the First Amendment rights of complainants' like CLC, and we look forward to vindicating those rights," she added.

Iowans are fortunate that a national group has gone to such lengths to hold Ernst's staffers and allies accountable for flouting campaign finance laws.

Top image: Screen shot from "Won't Stand For It," one of the ads Iowa Values produced and aired to benefit Senator Joni Ernst.