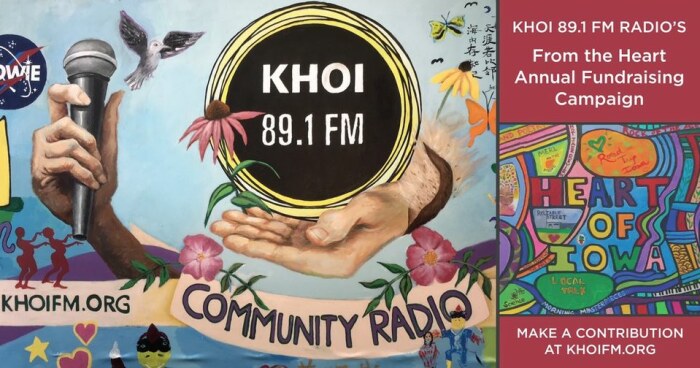 In the spirit of “Giving Tuesday,” I want to encourage Bleeding Heartland readers to support one or more nonprofits that help make quality journalism available to Iowans at no charge to readers or listeners. The entities listed below are 501(c)3 organizations, so donations are tax-deductible.

If you aren’t in a position to give money to any organization right now, you can help spread the word about solid reporting by sharing links through e-mail networks or social media feeds, or telling friends about sites you enjoy reading.

KHOI has been broadcasting from Ames since 2012, using the nonprofit community radio model. You can listen online from anywhere, or on the radio at 89.1 FM in the Ames listening area.

The station airs no advertising. Its programming is 50 percent music, 50 percent talk. The music programming is incredibly diverse, giving air time to early and contemporary jazz, classical, funk, soul, and hip-hop, cast albums from musical theater, music by Iowa artists, “cutting edge” tracks from New York City, new music from Indigenous artists around the Western hemisphere, rhythm and blues hits from the mid-20th century, and even 8-track tapes from the 1960s and 1970s.

Many of KHOI’s talk programs are locally produced by volunteers. Those include “Local Talk,” “Heart of Iowa, and “Community Book Shelf,” which features “books, short stories, and poetry by local authors, read by the authors and local narrators.” The station also broadcasts some syndicated news programs, such as “Democracy Now!”, “Letters & Politics” with Mitch Jeserich, and the weekly “This Way Out,” which highlights news about the LGBTQ community.

I’ve been working part-time as KHOI’s statehouse reporter since late last year. Dennis Hart and I discuss Iowa politics on “Capitol Week,” a 30-minute show that airs Mondays at 7:00 pm, with a replay on Wednesdays at noon. (The full archive is here.) Although I have occasionally been interviewed on other radio stations over the years, I’ve never had a regular opportunity to talk in depth about political happenings, including stories I didn’t have time to write about on this website.

This summer, KHOI’s management objected after Governor Kim Reynolds’ communications director prevented me from entering a public building where Reynolds was about to speak to the media. (The governor’s staff kept me out of her press conferences for years.) After KHOI’s program director followed up several times, the governor’s office told me I would be permitted to attend official events “as a correspondent for KHOI radio”—that is, not as Bleeding Heartland’s representative.

The Western Iowa Journalism Foundation is the new kid on the block, just established in 2020 with a mission “to support community journalism that ensures long-term access to accurate local news and investigative reporting throughout western Iowa.”

We strongly believe residents of western Iowa deserve professional community journalism that fosters a healthy democracy by holding government officials responsible for actions, reporting vital information on local issues, and providing a fair forum for debate. Therefore, our service area includes all counties west of Interstate 35 – which runs from the Missouri to Minnesota boarder in central Iowa. This area represents roughly half of the state of Iowa.

However, until the WIJF reaches full operational funding, our initial focus will center on supporting family or independently owned newspapers in Carroll, Greene, Crawford and Buena Vista counties.

When developmental fundraising goals are met, WIJF will work toward fully assessing the operational, financial, and staffing support needs of newspapers in our full service area to shape future tactical assistance and education along with quantifying resources necessary for community journalism sustainability throughout western Iowa.

Part of our mission is also to elevate underrepresented voices. In Storm Lake, there are about twenty-seven different languages spoken in the public schools. We have a unique opportunity to make La Prensa robust and sustainable. If this works, maybe we have other opportunities to support a news outlet for the Southeast Asian community, which is also burgeoning here. […]

I have hopes that could open up opportunities for local people who want to stay local and do this kind of work. Students want to be able to pay back their student loans. With current salaries right now, that’s tough. There’s an opportunity to offer up a little bit of hope. Our goal is permanence, sustainability, people putting down roots and investing in these communities as vital members, as well as reporters.

Iowa Watch publishes work by a strong team of freelance reporters, and its articles are available for other news organizations to publish at no charge. Some examples of recent original reporting: Lyle Muller’s interview with a young woman who is a COVID-19 “long hauler,” Andy Kopsa’s interview with State Medical Director Dr. Caitlin Pedati, and analysis of 2020 census data on population changes in Iowa’s small towns, with in-depth stories about several small towns that have grown over the past decade.

The Iowa Center for Public Affairs Journalism accepts donations online or by check.

Iowa Capital Dispatch launched in early 2020 as an affiliate of States Newsroom, a nonprofit based in North Carolina. The website has editorial independence from States Newsroom leadership and provides nonpartisan coverage with this goal:

The Iowa Capital Dispatch is a hard-hitting, independent news organization dedicated to connecting Iowans to their state government and its impact on their lives. The Capital Dispatch combines state government coverage with relentless investigative journalism, deep dives into the consequences of policy, political insight, and principled commentary.

We deeply believe in sharing the stories of people outside the halls of power, connecting the actions of state leaders to their impacts on Iowans. We also believe that without strong community journalism, Iowans risk losing the government integrity and accountability they have long valued.

Readers can donate online or by check.

Iowa Public Radio broadcasts lots of original local content as well as some national or international news programs by the BBC or National Public Radio. Even if you don’t listen to “Talk of Iowa” and “River to River,” you can find many stories online by IPR’s reporters around the state, including Kassidy Arena, Kendall Crawford, Natalie Krebs, Kate Payne, Katarina Sostaric, and Caitlin Troutman.

In addition to covering the big news of the day, Iowa Public Radio’s team often produces stories you won’t find anywhere else, like Payne’s series of exclusive reports this year on conditions and policies in Iowa prisons. The Iowa Department of Corrections halted a new policy on opening and photocopying legal mail sent to incarcerated people after Payne broke the news about the practice and quoted attorneys expressing constitutional concerns.

The Iowa PBS Foundation accepts donations online, over the phone, or by mail.

Final note: Bleeding Heartland is structured as an LLC, so reader contributions are not tax-deductible. Many other independent Iowa media outlets are also organized as for-profit businesses. For “Small Business Saturday” over the weekend, I renewed my subscriptions to the locally-owned Iowa Falls Times Citizen, Carroll Times Herald, and Storm Lake Times.