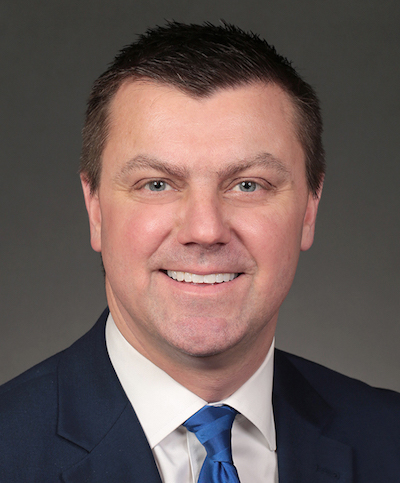 Iowa Senate Majority Leader Jack Whitver announced on November 29 that he will seek re-election in 2022, but not in the Ankeny-based district he has represented since 2011.

In a news release, Whitver bragged about keeping his promises "to implement conservative budgets, reduce taxes and put pro-growth policies into place," while "funding education" and supporting law enforcement "with bold reforms."

But the top Senate Republican isn't confident enough to let the Iowans who know him best judge his record. Instead of running in the new Senate district 21, where he now lives, Whitver will flee to safer GOP territory in Senate district 23.

Whitver's decision closes one door for the second-ranking Senate Republican, Jake Chapman, who was also placed in a swing suburban district following redistricting.

The majority leader's current district includes all of Ankeny, a few neighborhoods on the north side of Des Moines, and some other areas in northern Polk County. 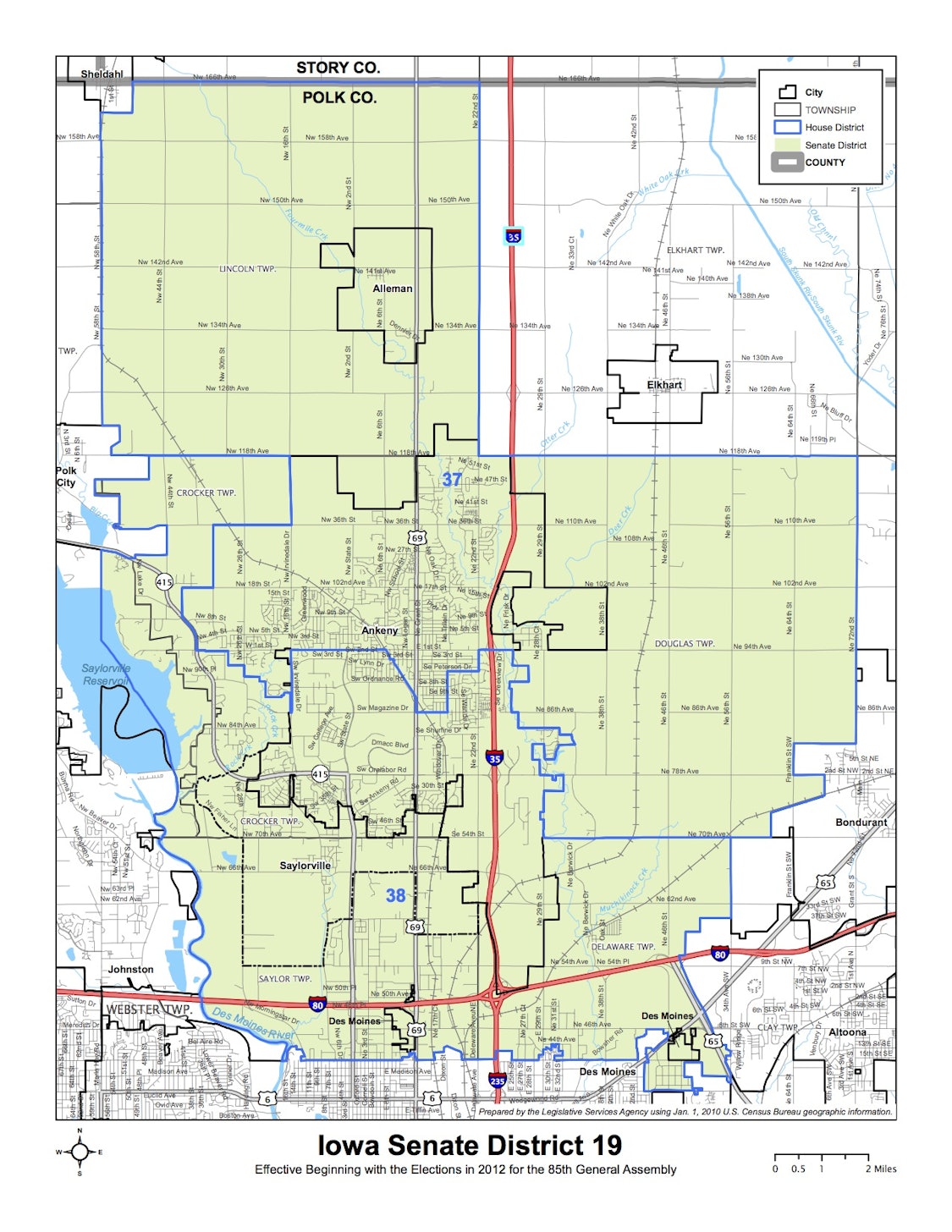 Whitver easily won a 2011 special election for the Iowa Senate and didn't face a Democratic opponent in his 2014 re-election race. But Democrat Amber Gustafson gave him all he could handle in 2018. Republicans spent at least $530,000 defending Whitver, who ended up winning with about 51 percent of the vote.

Mirroring trends in many other suburbs, voters in Ankeny drifted toward Democrats over the past decade. Whereas Donald Trump carried Whitver's Iowa Senate district by 50.2 percent to 42.4 percent in 2016, Trump's advantage shrank in 2020: 50.1 percent supported the president while 47.9 percent voted for Joe Biden.

Because of rapid growth in the Ankeny area, Whitver's district became over-populated. This year's redistricting plan put most of the suburb in the new Senate district 21, which excludes outlying areas such as the small town of Alleman and Saylor and Crocker townships. 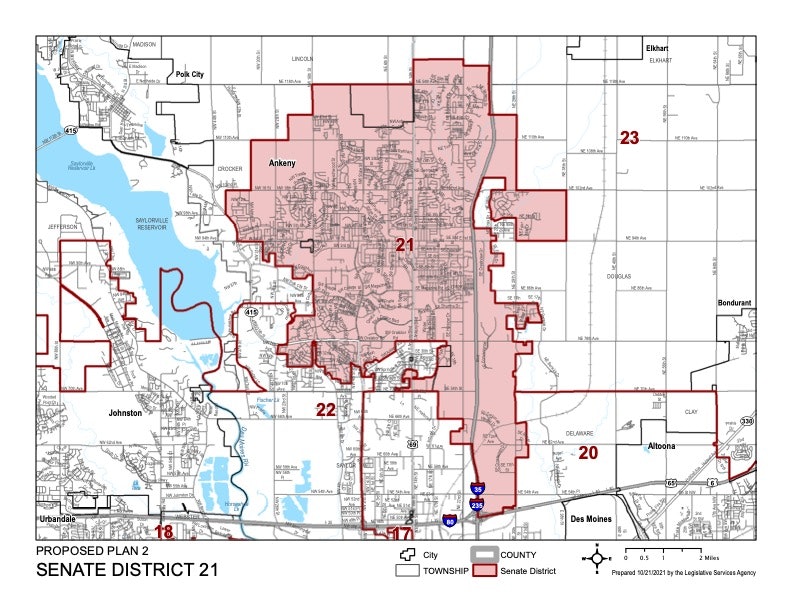 According to a map Josh Hughes created in Dave's Redistricting App, voters in the new Senate district 21 favored Biden over Trump by 49.2 percent to 48.5 percent. But there appear to be quite a few "never Trump" Republicans in the area, because Senator Joni Ernst won the same precincts by 49.4 percent to 48.0 percent. (Statewide, Ernst's winning margin was smaller than Trump's.)

Whether suburban voters will continue to trend toward Democrats remains to be seen. Arguably Whitver could have been re-elected in this Ankeny-centered district in 2022, especially if conditions favor Republicans nationally. But the Senate majority leader didn't want to chance it.

Republican State Representative Mike Bousselot announced on November 30 that he will run in Senate district 21 next year. Bousselot won a special election in one of the Ankeny-based Iowa House seats in September and will be heavily favored in the GOP primary if he doesn't clear the field. Because he is so new to the legislature, he won't have to answer for some of the most extreme laws passed on Whitver's watch.

The likely Democratic nominee for Senate district 21 is "Iowa vaccine hunter" Todd Brady, who has been actively campaigning since July. This race should be a top target for both parties.

The Iowa Senate Republican news release said Whitver will seek re-election in the new Senate district 23, which includes some precincts he already represents. State Senator Zach Nunn already resides in this district, but he is running for Congress in 2022. 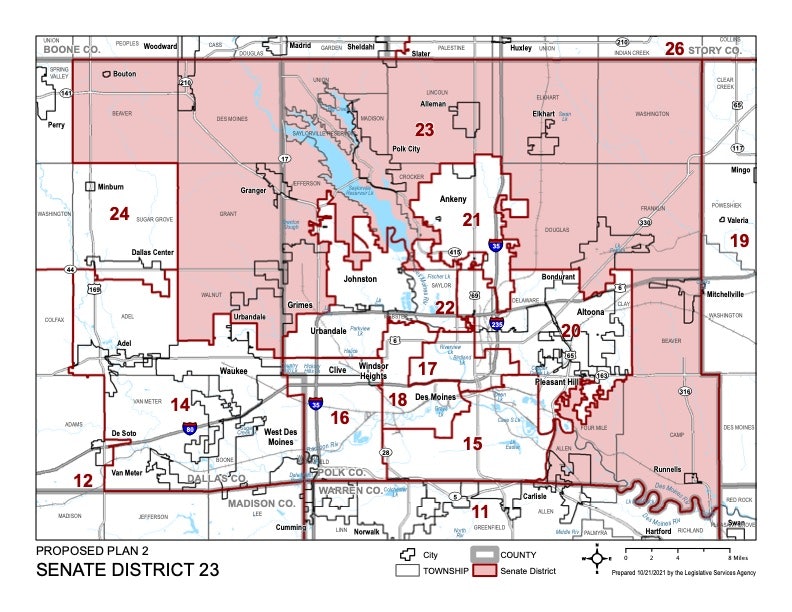 According to the Dave's Redistricting App map, Trump carried the precincts in the new Senate district 23 by 55.6 percent to 42.2 percent for Biden. Ernst carried this district by a slightly wider margin of 56.3 percent to 41.2 percent. So Whitver should be able to hold this seat with more easily than the swing district he now represents.

I haven't heard of any Democrat planning to run in the new Senate district 23. I doubt Democrats will leave this seat uncontested next year, though. A November 30 news release from the Senate Majority Fund bashed Whitver for breaking a promise to serve only two terms in the legislature. Here's his speech at the December 2010 GOP nominating convention for a special Senate election:

Whitver told the Republican delegates (starting around the 2:45 mark),

Finally, but in my opinion most importantly, I believe in term limits. If nominated tonight, I pledge right here, right now, that I will serve no more than two terms in the Iowa Senate.

I think that career politicians are one of the biggest problems that we have. And I think that getting rid of them are the single most effective way to eliminate the corruption, fix our political system, and return our country to greatness.

Senate Majority Fund Executive Director Andy Suchorski said in the news release, “The literal first thing Jack Whitver did in his new Senate district was break his original term-limit campaign promise. By moving to a more Republican district, Jack Whitver is trying to extend his political career as long as possible, which is ironic, because he started his career by bashing the same type of corrupt career politician he has become.”

One wrinkle about Whitver's move: it closes off possible escape hatch for Iowa Senate President Jake Chapman. The new political map put him in a swing district as well, the new Senate district 14. I expect Chapman to move to a more conservative area, because if he stays he will have to seek re-election in 2022 against Democratic State Senator Sarah Trone Garriott. She announced on December 1 that she will move from her current residence in Windsor Heights to part of Dallas County that's in the Senate district 14.

Chapman has at least two other viable options, depending on whether Republican colleagues who live in the new Senate district 9 and 12 retire.

UPDATE: Chapman confirmed on January 31 that he will seek re-election in the new Senate district 14.

Democrat Matt Pries announced his candidacy in Senate district 23 on February 8. Excerpts from his news release:

"I am running for State Senate because we deserve an advocate for hardworking Iowans and their families,” said Matt Pries. “Serving others is something to which we are all called, and I am excited to be answering that call to run for State Senate. I am committed to unity, bipartisanship, and problem solving. I want to make our state a happier, healthier place for all people.”

Matt and his wife of 20 years, Heidi, and two sons, Owen and Alex, have lived in Grimes since 2006. Matt and his family have been faithful members of St. Peter Lutheran Church in Grimes where he has led children’s music and Vacation Bible School. He has also served as chair of the Transition Task Force, a member of the Call Committee, a member of the choir, an assisting minister, lector, and usher/greeter. [...]

Matt earned his BA at Wartburg College in 1995, graduating Summa Cum Laude, and went on to earn a Master of Arts in Education from the University of Northern Iowa in 2004. Matt has taught English and been a Literacy Interventionist at Waukee High School for the past 16 years; he has also advised a service group, Random Acts of Kindness. Matt is also an assistant girls track and field coach at Northwest High School and head boys cross country coach at Dallas Center-Grimes High School. As a coach, he has been part of eight girls track and field state titles at Waukee, two as head coach, and has led DCG to three straight state cross country titles.

Matt Pries added, “We need new policies to address the state’s workforce crisis. Our district deserves a true advocate for public education and mental health. I will be a voice for diversity, striving to ensure all people have access to services they need, and stand for responsible use of our resources. We must become a leader in sustainability and demonstrate concern for future generations.”