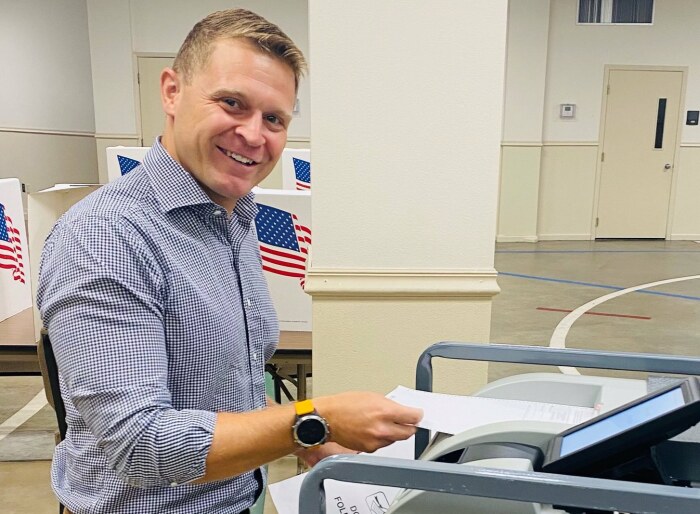 Republican Mike Bousselot won the September 14 special election in Iowa House district 37 with 51.6 percent of the vote to 48.3 percent for Democrat Andrea Phillips, according to unofficial results from the Polk County elections office. Those numbers should change very little, since late-arriving absentee ballots mailed before the election can no longer be counted under the voter suppression law Republicans enacted this year.

Once Bousselot is sworn in to represent this district covering part of Ankeny and northern Polk County, the GOP will again hold 59 of the 100 Iowa House seats. Democrats currently hold 40 seats, and an October 12 special election will fill the vacancy in House district 29.

I'll have more to say about today's race once more details become available on the partisan breakdown of the electorate. For now, a few quick hits:

A lot of people showed up for this election. Total ballots cast were about 42.6 percent of the number from the November 2020 general election, which set modern turnout records. Granted, House district 37 has excess population due to rapid growth in Ankeny this past decade. But even so, 11,477 ballots cast is a remarkably high level of voter participation for a special election.

Many people believe in the axiom that high turnout is always good news for Democrats. But as we saw in the 2018 governor's race and the 2020 elections across the board, Democratic candidates can lose even when turnout exceeds expectations.

I will update this post when I have final numbers from the Polk County auditor's office, but I don't believe Phillips lost because Democrats stayed home. Rather, high Democratic turnout was matched by high GOP turnout and an edge for Bousselot among independents.

While the Phillips campaign focused its volunteer efforts on Democratic households and no-party voters identified as supporters of past Democratic candidates, Republicans seem to have engaged a larger universe of voters affiliated with neither party.

The GOP winning margin was smaller than in 2020.

The late John Landon outperformed Donald Trump and defeated Phillips last year by a margin of 53.1 percent to 46.7 percent. Bousselot managed a 3-point win after Republicans pulled out all the stops, including assistance from the last two governors and both of Iowa's U.S. senators.

Unfortunately, absentee ballots won't be broken down by precinct the way they were for 2020 general election, so I won't be able to create an apples to apples comparison of precinct-level vote totals to see where Bousselot did better or worse than Landon. District-wide, the Republican's total of 5,920 votes was a little more than 41 percent of Landon's total from last November, whereas Phillips received about 44 percent as many votes as she did in the 2020 election.

One glimmer of hope for Democrats: Ankeny's population is now more than twice as large as the ideal population for an Iowa House district. So on the next political map, there may well be two Iowa House districts wholly contained within this northern Des Moines suburb. A Democrat candidate might have a better chance in a House district that did not include outlying areas like Alleman and Douglas Township.

Republicans are beholden to the conspiracy fringe.

Gavin Aronsen published a definitive account at Iowa Informer on how "Bousselot’s campaign has welcomed the support of outspoken COVID-19 conspiracy theorists," and "the candidate himself has subscribed to numerous falsehoods about the pandemic and supposed fraud in the 2020 presidential election, among other subjects."

Thomas Lecaque wrote an essay for The Bulwark on the growing influence of QAnon conspiracy theorists in Ankeny, including the "Iowa Mama Bears" Emily Peterson and Kimberly Reicks, who volunteered for Bousselot's campaign.

With a winning margin of 377 votes, it's clear that Bousselot needed the active engagement of the fringe element. He said in a written statement tonight, "I have pledged to be a representative that listens. Someone who hears from my community and takes action on the issues they care most about." He added, "I am prepared to fight tooth and nail for policies that will keep our community safe, your freedoms protected and our economy thriving."

Republican candidates have every incentive to keep lying.

I didn't see any mainstream media fact-checks of Bousselot's false, well-funded attack ads. (Please let me know if I missed one.) It's not the first time Iowa Republicans have relied on such tactics. Landon ran similar ads against Phillips last year, and many other Democratic candidates were dogged by false claims about "socialism" or "defunding the police." Before 2020, Republicans reused the same lie about "heated sidewalks" in Iowa House and Senate races for five straight election cycles.

In a written statement, Iowa Democratic Party state chair Ross Wilburn praised Phillips for running "a positive campaign focused on the issues Iowans care about," while Republicans "resorted to lies and conspiracy theories." He vowed, "Iowa Democrats will remember the Iowa GOP’s dirty and underhanded tactics during this campaign. We’re fired up to defeat them in 2022."

It's a nice idea, but I can't recall any Iowa Republican candidate who paid a price for building a campaign on deception. Most news coverage of campaigns sticks to a "both sides" or "he said/she said" frame, which works to the GOP's advantage. That won't change until reporters are willing to tell readers and viewers that one candidate is lying to them.

Top image: Mike Bousselot casts his ballot on September 14. Cropped from a photo posted on his Twitter feed.